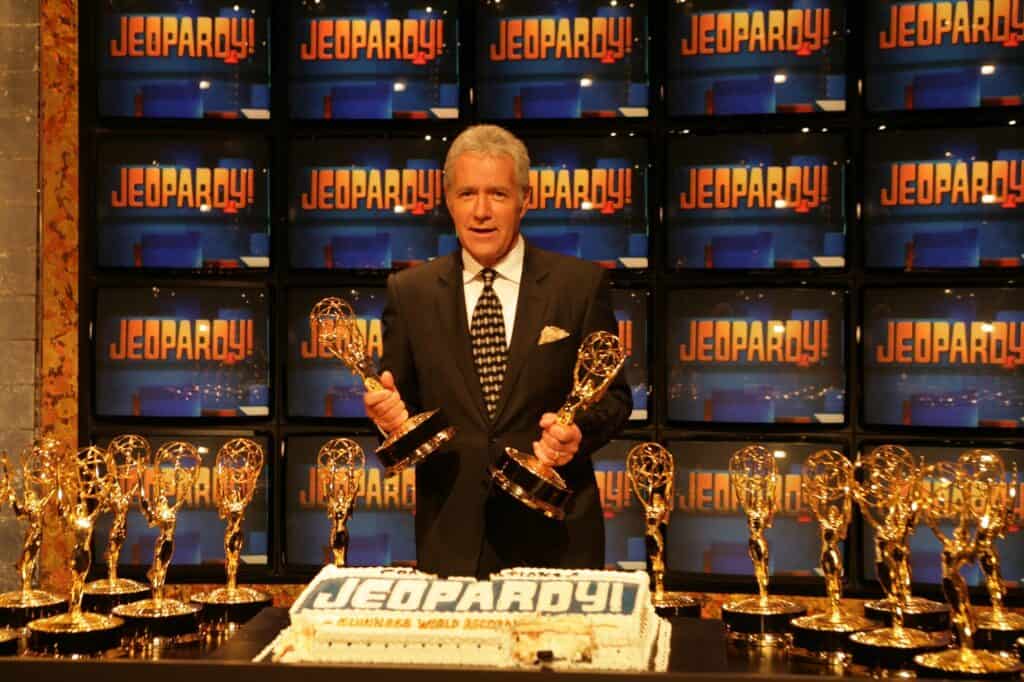 Ken Jennings is the winningest Jeopardy! champion in the history of the show.

He won 74 straight times before being defeated in 2004; filming of his shows took 16 weeks.

Because of his longevity on the show, he developed a unique kinship with Jeopardy! host Alex Trebek.

Like the rest of the world, Jennings is mourning Trebek’s death.

Trebek died on November 8, 2020 at the age of 80 after a heroic and vigilant battle with Stage 4 pancreatic cancer.

He shared his diagnosis with the world in March, 2019.

Jennings took to social media to share his thoughts on Trebek’s passing.

Thinking today about his family and his Jeopardy! family—which, in a way, included millions of us.

While Jennings was a contestant, he had to keep his distance from Trebek because he had all of the answers.

Jennings still got to know the behind-the-scenes Trebek.

“It’s a very odd relationship because none of the contestants, whether they’re on once or 75 times, nobody gets to hang out with Alex. That’s a violation of FCC regulations for the contestants to hang out with anybody who knows the answers. And as we all know, Alex knows all the answers or the questions…..So, you get to see him in little snatches over your time on the show. And over the years, I’ve kind of gotten a sense of who he is. He’s exactly the guy we all want him to be from TV, not just the cool old-school broadcaster, but the reliably good authoritative person. He’s also a little bit goofier than you’d think. Between rounds, he’ll take audience questions and he’s cracking jokes that are self-deprecating. He swears. He does accents. I’ve seen him do little bits of song and dance. He’s really much more the goofy uncle than the stern dad, and I think America doesn’t always see that because there’s not a lot of time for him to make wisecracks.”

Trebek wrote in his memoir, “The Answer Is . . .: Reflections on My Life”, about Jennings’ eventual loss on the show.

“I had tears in my eyes. It just all happened so quickly. Ken lost. … The show ended. I remember thinking, ‘Ken’s gone. My buddy. My pal. This was getting to be ‘The Ken and Alex Show.’”

Jennings joined the show in 2020 as a consulting producer.

Many have wondered if he will follow in his friend’s footsteps and be the next host of the show.

Jennings is not prepared to entertain those questions or think about anyone else hosting the show that was Trebek’s home for 36 years.

Prior to Trebek’s death, he said:

“It’s really hard for me to answer that question because it requires envisioning a version of Jeopardy! without Alex Trebek. As great as that job would be, I am not emotionally prepared to do that right now. I have one host of Jeopardy! in my heart. So, I hope Alex is doing well.”