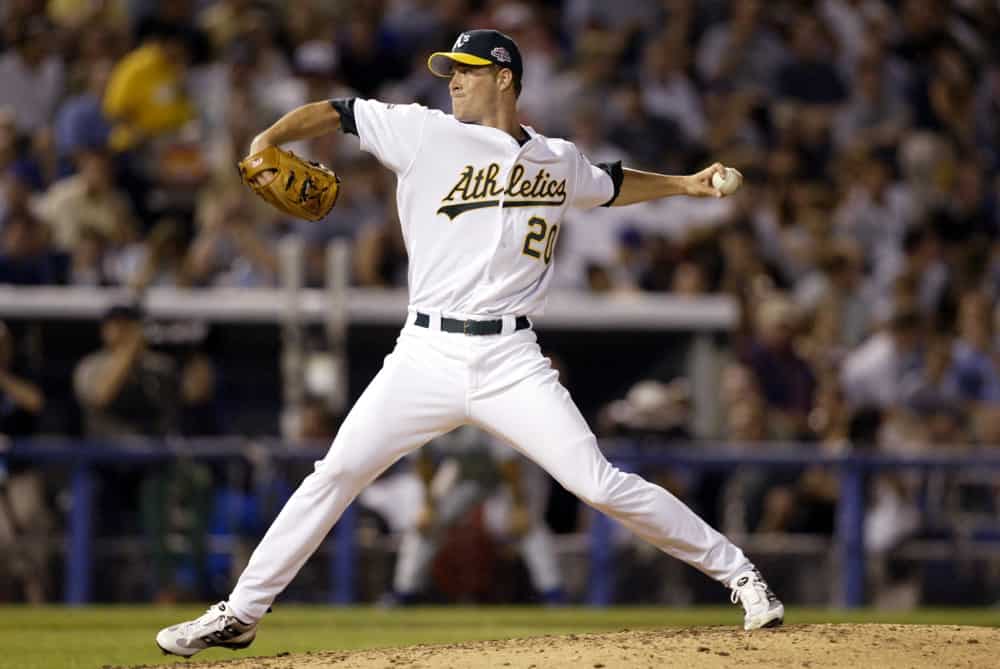 He was known as a tall, crafty left-handed pitcher with the ability to induce weak contact.

On the Athletics, he was paired with fellow pitchers Barry Zito and Tim Hudson to form a strong starting rotation.

The trio became known as the “Big Three.”

Mulder was a major part of that, as he developed himself into a consistent arm.

The minute you start getting in trouble, you can’t try to do new stuff. You can’t try to make a nasty pitch or ‘paint the black’ because that’s when you fall behind.

You have to stick with what works for you and go after hitters like there’s nobody on base. -Mark Mulder pic.twitter.com/626qr0RsHG

This included a three season stretch where he was able to effectively get outs.

However, he wasn’t able to stick around the league for very long.

Problems with his rotator cuff derailed his career and hampered his effectiveness.

Here is a look at Mulder’s complete career story and where he is today.

Mulder was drafted by the Athletics in the first round of the 1998 MLB Draft.

He spent little time in the minor leagues, earning his promotion in April of 2000.

Here, he was thrown into the Athletics rotation where he was allowed to struggle on his own.

These struggles would eventually pay off as Mulder found his way during the next season.

He elevated his game to become the ace of the Athletics pitching staff.

In 34 starts, Mulder led the MLB in wins with 21 and complete game shutouts with four.

He also added a 3.45 ERA on top of that, resulting in a second place Cy Young finish.

Mulder also proved himself in the playoffs, throwing two solid games against the New York Yankees in the ALDS.

He came back the next season and had a comparable stat line, finishing with a 19-7 record and 3.47 ERA.

This earned him his first career All-Star appearance.

In 2004, Mulder earned another All-Star appearance but had an abysmal second half of the season.

That offseason, Mulder was traded to the St. Louis Cardinals.

After doing well in his first season with the team, Mulder’s rotator cuff began to act up.

He started the 2006 season well before suffering from shoulder issues.

This caused his ERA to quickly rise, jumping to a 7.14.

It did not get any better from there.

He missed most of the 2007 season after having rotator cuff surgery.

January 10, 2007: SP Mark Mulder (@markmulder20) re-signed with the St. Louis @Cardinals to a two-year $13 million contract, with performance-based incentives and a club option that could take the deal to three years at a possible $45 million.#stlcards pic.twitter.com/FQ9Ntx7qD1

When he came back, he posted an awful 12.27 ERA and lost all three of his starts.

Once again, Mulder needed shoulder surgery that sidelined him for most of 2008.

His three appearances that season would be the last of his career, electing to retire as injuries continued to plague him.

This was a disappointing end for a player who once looked to have a promising career in the league.

Where Is Mulder Today?

Since retiring from baseball, Mulder shifted his focus to another sport.

He began pursuing a career in golf.

He won the American Century Championship, a celebrity golf tournament, in 2015.

Mulder then went on to win it the next two years as well.

He had the opportunity to play in the Safeway Open, a PGA Tour event in 2018.

While he didn’t make the cut, Mulder still was just +5 in his two rounds.

On top of playing golf, he has spent some time as a baseball broadcaster.

He spent some time as an analyst for ESPN’s Baseball Tonight and for Athletics broadcasts.

Mulder also attempted a comeback to the MLB in 2014 with the Los Angeles Angels.

However, he tore his Achilles during a spring training drill and ended his comeback bid.

Though his playing career never panned out, Mulder will always be remembered for the potential he had on the field.

Of course, he is still loved by Athletics fans for his time with the “Big Three.”

In a group of three distinguished pitchers, Mulder still stood out at the time.

If he had never gotten injured, who knows how good he could have been.

2 Moves The Athletics Should Make This Offseason

The Athletics Will Get A Taste Of Las Vegas In 2023

Analyst Calls Out The Oakland A's For A Frustrating Claim

MLB Commissioner All But Confirms An Upcoming Move

Stephen Vogt Had A Storybook Ending To His MLB Career

The A's Have A Bright Spot To Celebrate In September

The A's Are Finally Playing At A Specific Venue

The A's Continue To Have Dismal Attendance Lows

The Athletics Are Not Supporting Their Pitchers At All

The Athletics Are Giving A Top Addition A Chance

Rob Manfred Comments On The State Of The A's

Home Record Proves Why A's Fans Are Not Coming To Games

Hilarious Video Shows Young A's Fans Get Into A Frenzy

Top 3 Most Underrated Teams In Baseball In 2021

Athletics Deep In The Basement Of MLB Average Attendance

A's Continue To Have Shocking Attendance Figures In 2022