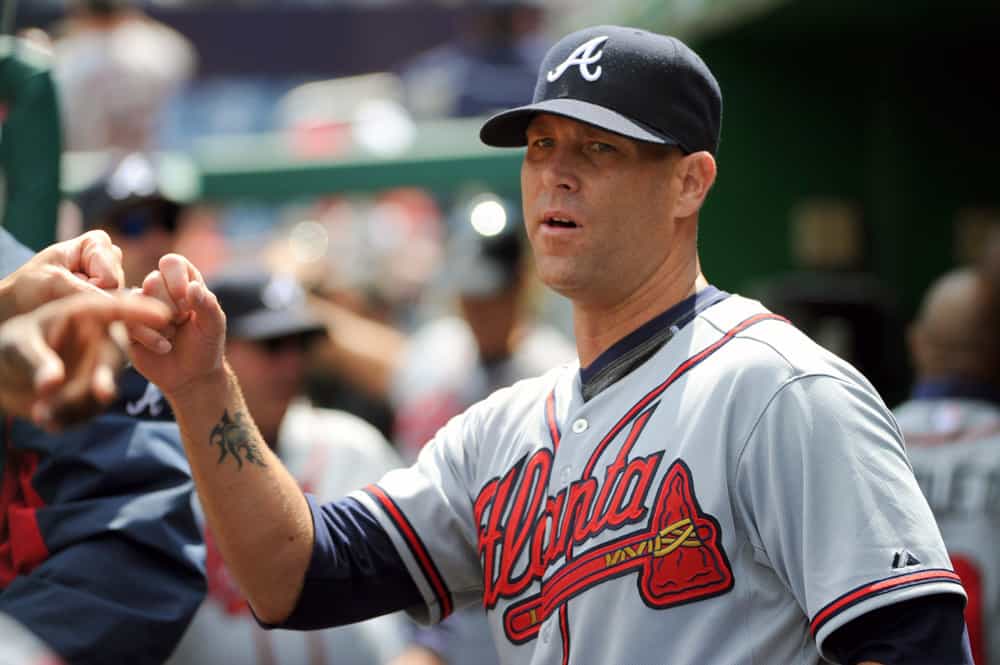 Former Oakland Athletics pitcher Tim Hudson put together a long and productive career in the MLB.

The right-hander played for three different teams throughout his 17-year career.

Over this time, he was one of the most consistent arms in the entire MLB.

He was known as a finesse pitcher that was able to get outs without posting a ton of strikeouts.

While he may never have been at the absolute peak of starting pitchers during his generation, he thrived in an era where inflated offense forced pitchers to adapt.

Here is a breakdown of Hudson’s career and where the former MLB star is now.

Hudson was drafted by the Oakland Athletics in the sixth round of the 1997 MLB draft.

He spent two seasons in the minors before getting called up during the 1999 season.

Quickly, he developed himself into a solid contributor on the mound.

On September 4th, 1999, Tim Hudson strikes out eight Tigers in a dominant complete game, and Ramon Hernandez drives in Scott Spiezio to walk it off in the 9th! #RootedInOakland pic.twitter.com/SN2EzU1jP4

Over the next few seasons, he was an integral part of the A’s Moneyball success.

Him and fellow pitchers Barry Zito and Mark Mulder formed one of the most formidable pitching trios in the entire league.

The group was known as the “Big Three” and they created one of the best pitching cores of the past generation.

After posting a 3.37 ERA in 2001, Hudson strung together two straight seasons with an under-two ERA.

After the 2004 season, the “Big Three” split up as Hudson and Mulder left the Athletics.

For Hudson, this set up a second act for his career that was nearly as dominant.

Prior to the 2005 season, Hudson was traded to the Atlanta Braves and later signed a four-year contract extension with the team.

He continued his solid play with his new team as he had a 3.52 ERA his first season.

After a down year in 2006, he bounced back with another ERA in the low threes.

This earned him the third All-Star appearance of his career, and a fourth-place finish in the Cy Young voting.

Before the 2014 season, Hudson signed a contract to join the San Francisco Giants.

At 38-years-old, he still became a critical part of the Giants World Series run.

In the playoffs, he started in four games as the team worked their way through the National League.

Tim Hudson talks about the most important start of his career. #WorldSerieshttps://t.co/dPyY6EiZ04

The next year, Hudson struggled as he had the second highest ERA of his career (4.44).

Being 39 years old, Hudson decided to retire from baseball.

Now, Hudson has established an off-field charity that supports areas of need in the community, providing families with different kinds of assistance based on their needs.

Hudson spoke about the charity work.

“We have our Hudson Family Foundation that we’ve been involved, been passionate about for the last eight or 10 years. That’s something that we obviously serve families in Georgia and Alabama and families with children who are having a problem in one area or another. We’ve been getting very involved with our local church, in ministry with the homeless ministry and that’s something that we’ve reached out to over the last month or so. We just try to follow where God wants us to go and help whoever needs to be served.”

“I’m helping out with the varsity a little bit as well, but I’m more hands-on right now with the JV. It’s been fun coaching him; he’s in the seventh grade so it’s been coaching him, trying to stay out of his way a little bit but also spending time with him.” he said.

Hudson was also asked if he ever sees himself coaching at the professional level.

He leaves behind a career as a stand-up guy in the sport of baseball.


Many other players in the league that have either played with or against Hudson view him as one of the best people in the sport, and his contributions after his career show this even further.

On the field, he left behind a legacy as one of the best and most consistent arms of the 2000s.

The A's Have Added A Key Power Bat To Their Lineup

The A's Have An Agreement With Key Pitcher

A's Take A Chance On A Veteran Reliever

The A's Continue To Focus On Rebuilding With Young Talent

A's Sought A Big Return From the Cardinals For Sean Murphy

The A's Have Actually Made An Addition In Free Agency

2 Moves The Athletics Should Make This Offseason

The Athletics Will Get A Taste Of Las Vegas In 2023

Analyst Calls Out The Oakland A's For A Frustrating Claim

MLB Commissioner All But Confirms An Upcoming Move

Stephen Vogt Had A Storybook Ending To His MLB Career

The A's Have A Bright Spot To Celebrate In September

The A's Are Finally Playing At A Specific Venue