You are here: Home / The Cold Spotlight / Mortal Kombat vs. Tekken (Which Is Better?)

Certain types of video games can steal you from real life and keep you playing for long hours without feeling tired or bored.

Mortal Kombat and Tekken specialize in this arena with a fighting theme, and they stand among the favorites of many gamers.

Both of these popular games have had multiple sequels in their series throughout the years.

Still, with Mortal Kombat 11 and Tekken 7 being the last and most advanced installments, many people are torn between purchasing and playing one of them.

This article mainly focuses on comparing the features of Mortal Kombat 11 and Tekken 7 to help you choose more easily. 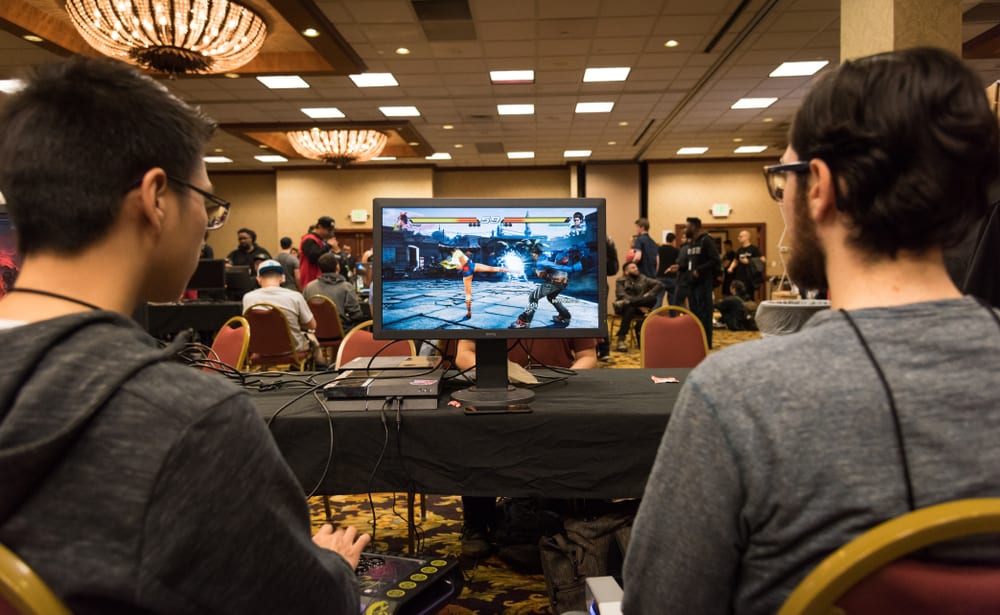 Although Mortal Kombat and Tekken may seem alike at first sight, they incorporate different fighting styles.

If you’re more into gore and blood, Mortal Kombat is your game.

If you want to focus more on improving your fighting skills, Tekken could be best.

Mortal Kombat seems to be more invested in its story mode, but both games offer multiple enjoyable other modes for both beginner and professional players.

Mortal Kombat characters are more brutal and realistic, while Tekken 7 has anime characters, too.

There’s no saying which game is actually better.

It highly depends on your taste and what you call a fun gaming experience. 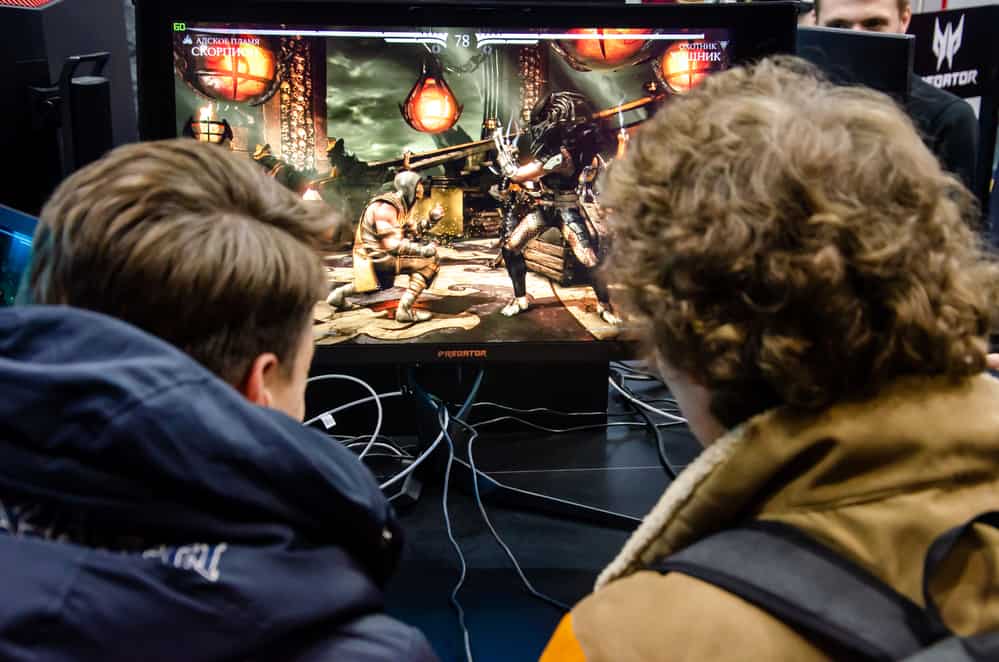 Shortly afterward, they also released Mortal Kombat 11: Ultimate Edition, containing all the downloadable content Mortal Kombat had up to that point.

Let’s take a look at the main features of Mortal Kombat 11 in detail.

The story of the past Mortal Kombat sequels ended with Shinnok’s defeat.

Now, Dark Raiden wants to make an example of Shinnok by decapitating him to destroy all their enemies and protect the Earth realm.

Killing Shinnok brings his mother, Kronika, into the picture.

Kronika is the keeper of time, and she plans to rewrite history to erase Raiden’s acts.

Throughout the story, players will take on the role of past and present characters when traveling through time as they race to stop Kronika from rebooting history.

The narrative makes sure the players are invested in their characters as the plot goes on.

It’s brilliant how the developers have interwoven the fights into the story’s cinematics, with seamless transitions from cutscenes to fights starting. 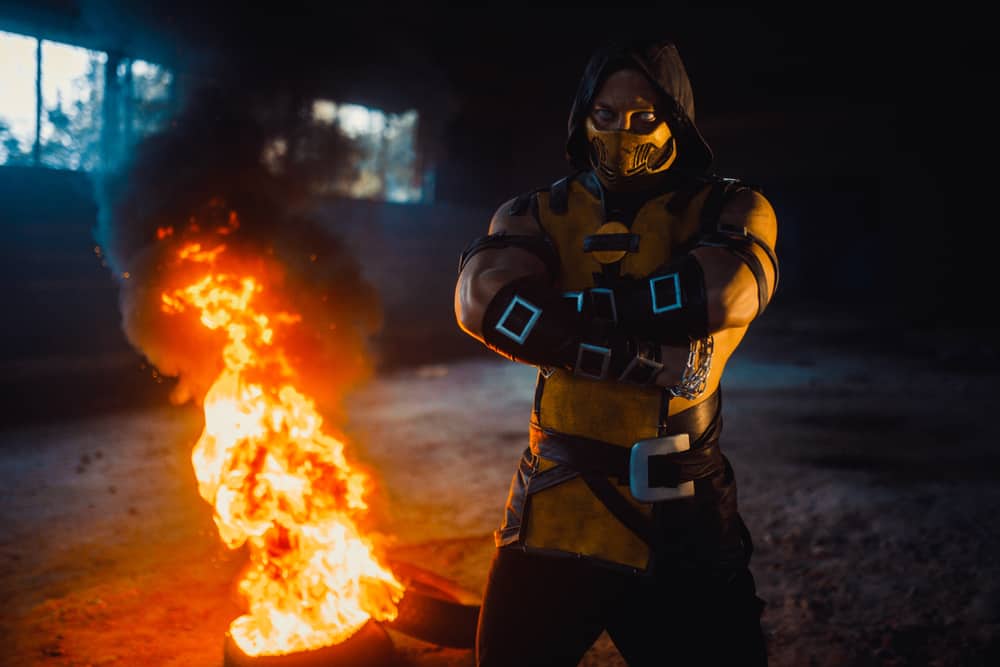 The game consists of 37 playable characters, including 25 base characters and 12 DLC characters.

Legendary and popular characters come back from Mortal Kombat’s past with unique abilities and fatalities.

More importantly, you can customize your fighters with various skins, special abilities, gears, taunts, and brutalities.

Tailoring your character’s attack style and shaping their strengths will allow you to fight on your own terms and enjoy the game even more. 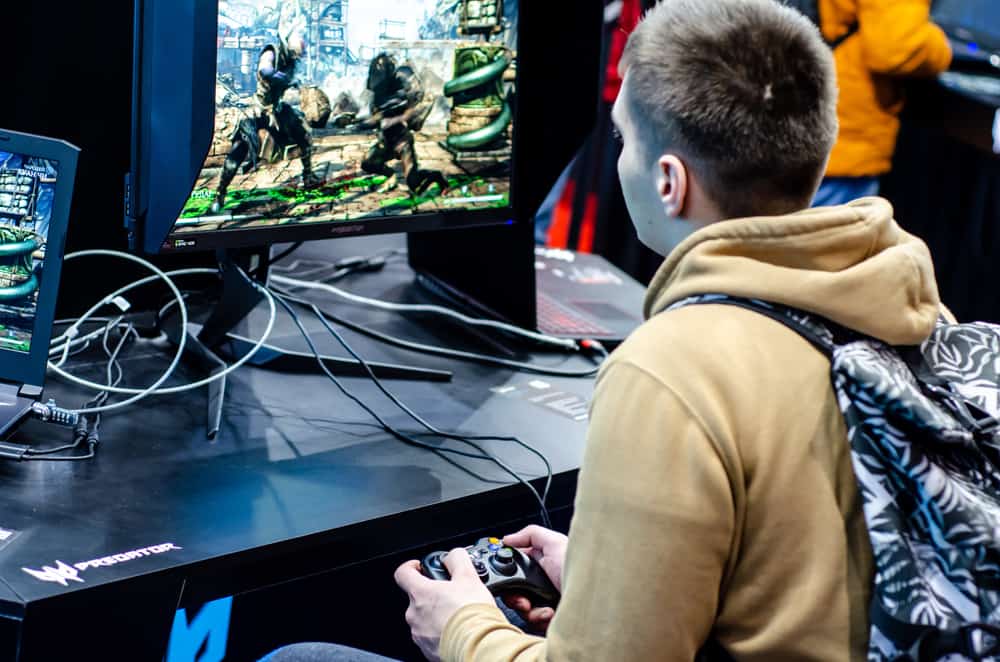 Mortal Kombat 11, which is a 2.5D game, is showcasing battles with enhanced graphics and animations.

They have introduced multiple new and enhanced combos, specials, fatalities, brutalities, and friendships to the gameplay.

As you must know, fatalities are strong finishing moves specific to each character that allows Mortal Kombat to unfold the most gore and intimate acts of bloody violence.

On top of that, you get flawless blocks, offensive and defensive meters, Mercy, Fatal Blows, and Krushing Blows.

Fatal Blows allow you to cause a significant amount of damage, but they only become available when the player’s health goes below 30%.

There’s also a one-time limit to when you can perform the Fatal Blows in a match.

Krushing Blows are cinematic variations of a special move that you can trigger when the situation meets certain conditions.

Mercy is another type of finisher in which the winning player decides to revive their opponent, offering them some life to continue. 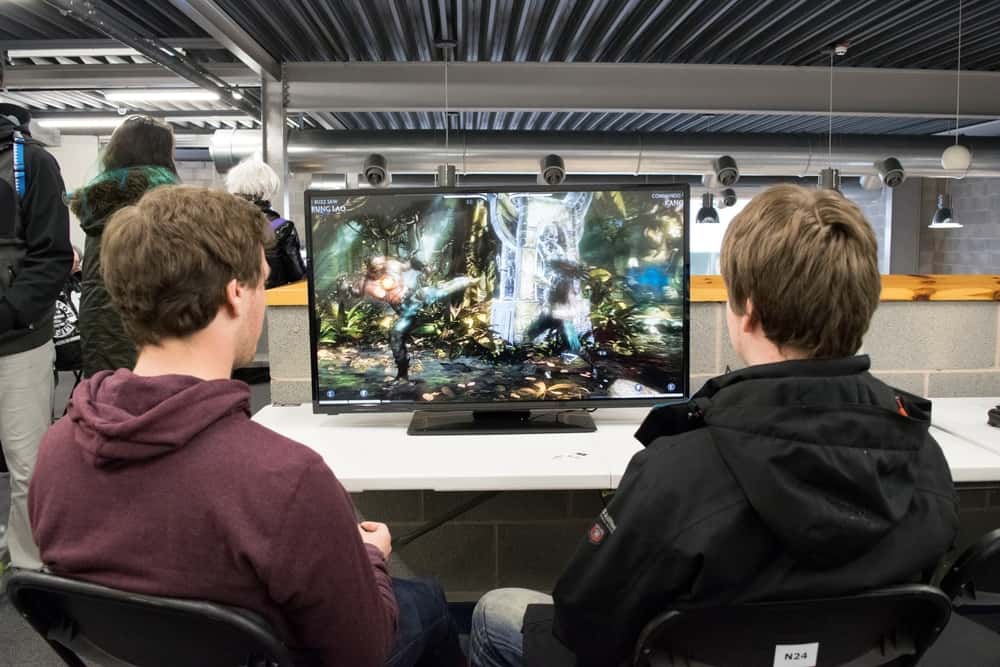 When you first enter the game, you’ll see four options in the menu: Konquer, Fight, Kustomize, and Learn.

Kustomize is where you can view collectibles and change your character’s looks and moves.

Learn allows you to practice techniques and complete tutorials to improve your skills.

The Fight brings you to a place for offline and online fights against real or CPU opponents. 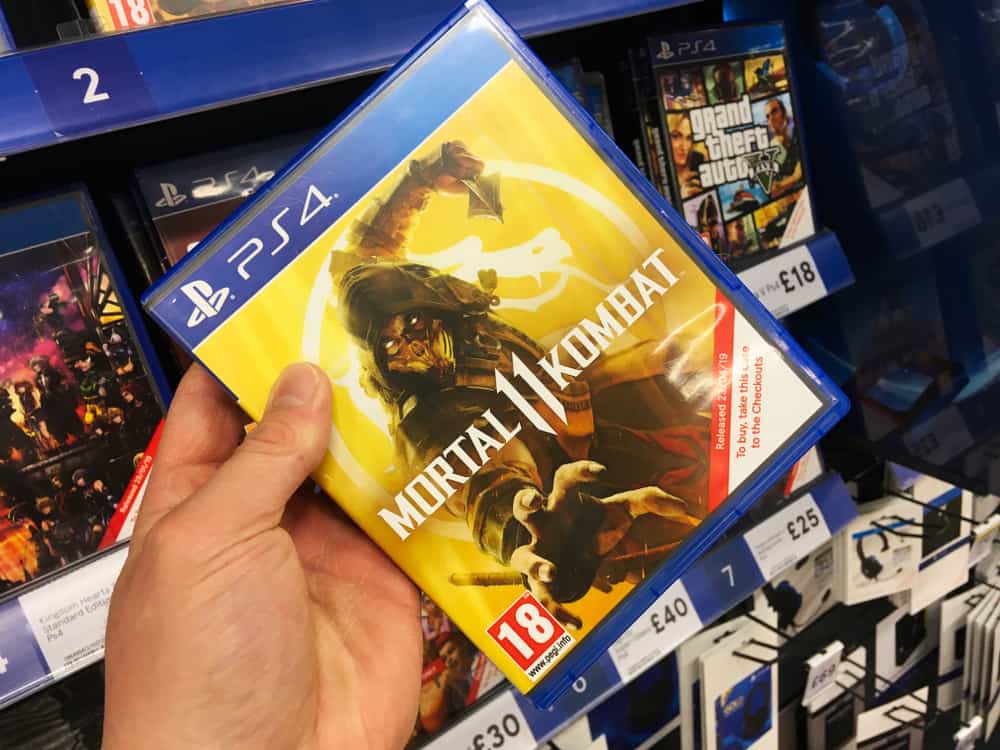 Mortal Kombat 11 is available on Microsoft Windows for PC gamers.

Also, console gamers can benefit from this game’s enhanced graphics and 4K dynamic resolution on PlayStation 4, Xbox One, and Nintendo Switch.

PS4 and Xbox One players can have a free upgrade to the PS5 and Xbox Series X|S versions while their main game and add-ons will move over to the new generation consoles.

Mortal Kombat also has cross-platform support, meaning PS4, PS5, Xbox One, and Xbox Series X|S players can fight against players on opposite platforms. 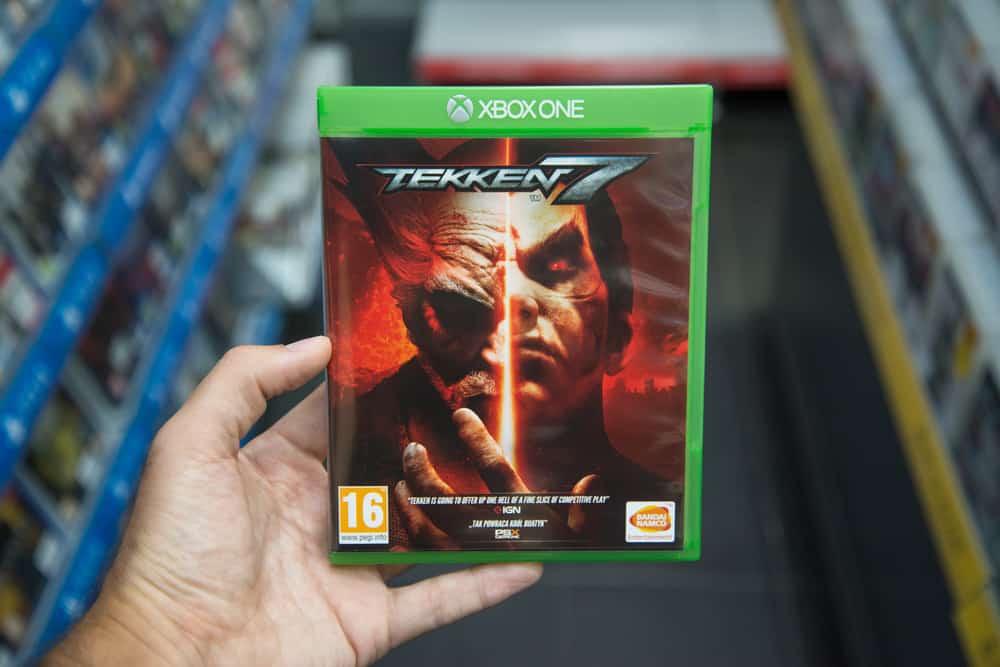 The Tekken games are another popular series of fighting games.

Tekken 7 is the ninth overall installment in the series with expanded features, including new characters, costumes, stages, items, and so on.

Bandai Namco Entertainment has developed and published the Tekken series.

The Story mode of the game remains highly popular, representing the final chapter of the 20-year-long Mishima feud.

After the events of Tekken 6, the war continues between the Mishima Zaibatsu and G Corporation as they try to settle old scores and wrestle for control over the global empire.

A reporter, whose wife and child died in the crossfire, tells the story of the game.

He investigates and finally decides to expose Mishima Zaibatsu and G Corporation.

The story focuses on the events that led to the final battle between martial artist Heihachi Mishima and his son, Kazuya.

Through the game’s story, vital moments turn into an interactive cutscene, challenging you to make decisions on the spot, making the game even more exciting and intense.

On top of the Mishima Saga, the Story mode has character episodes, allowing the player to meet more characters and get entangled deeper into the Tekken world.

Tekken 7 has 54 playable characters, 36 of which make up the fully unlocked cast, and 20 of them are the default cast on launch.

Other characters are to be added over time.

Each character has its own special deadly techniques and devastating combos, modeled after real-life martial arts.

You can choose between characters that are easier to master for beginners and move on to the better characters for advanced players over time.

You get aggressive characters, defensive ones, and so on.

Tekken 7 is a 3D fighting game that introduced new features to the gameplay, on top of special moves, jump attacks, and super combo moves.

Tekken 7 packs various game modes, both offline and online, on top of the story mode.

The offline mode, which is a perfect place for beginners to practice basic attacks and effective moves, include the following:

The online mode, which is made for more professional fighters, consists of the following:

Tekken 7 is available on Xbox One and Xbox Series X|S.

You can purchase Tekken 7 from Steam and Microsoft Store for playing on PC, as well.

Tekken’s director, Katsuhiro Harada, explains in a Tweet: “It’s not a matter of the technology for getting the PS4/Xbox One/PC players to match up against each other being the issue, but first-party company policies and potential security risks, alongside the community perceived reputation of PC gamers being cheaters that are hindering the decision to allow cross-platform play.” 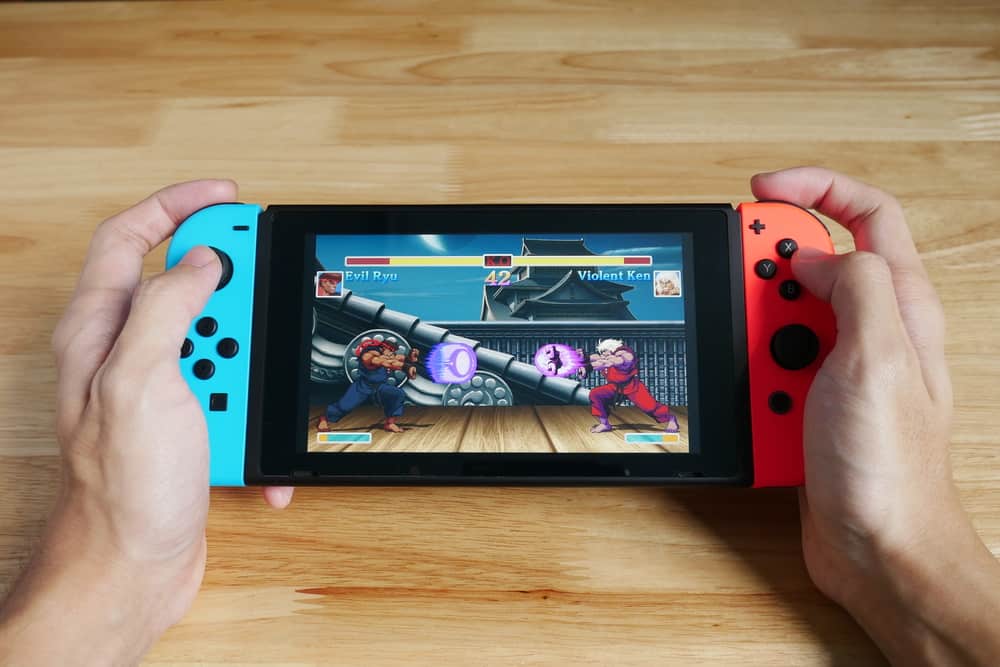 If you like games like Mortal Kombat and Tekken, you may also enjoy playing the following games with similar features and vibes.

You may even find out that you like one more than the two we’ve already discussed!

Killer Instinct is a highly popular action and fighting game that has adopted the same general settings as Mortal Kombat and Tekken.

It’s one of the closest games to them, considering style and features.

This game has been created and published by Microsoft Studios, and it offers single and multiplayer modes in intuitive fighting combos.

Killer Instinct was initially a part of Xbox One but is now available on Microsoft Store and Steam for PC gamers.

It’s a fast-paced, smooth, and lag-less game with diverse fighters for any taste.

Killer Instinct is free to play, but you’ll have to pay for unlocking characters.

It’s a great game for newbies because of its friendly combo mechanics.

Street Fighter first came out as an arcade game in the ‘80s, but then the series managed to shape the entire fighting game genre for decades.

Street Fighter focuses on testing your fighting game skills in more basic and heavier gameplay despite many other fighting games that favor gore and bloody visuals.

Street Fighter V is the latest iteration in the game series, and it’s available on Windows and PlayStation.

If you’re both a Mortal Kombat fan and a comic book fan who lives for the superheroes and villains, you should give Injustice a try.

Mortal Kombat’s developers have also developed this game series, consisting of Injustice and Injustice 2, which is an improvement with better graphics and new characters.

The game pits all DC villains and superheroes against each other in a battle to the death, so give it a try!

The main difference between them is that Mortal Kombat lets you play with digitized human characters, while Primal Rage has beasts and monsters like dinosaurs and gorillas.

The characters have their fighting abilities and special moves.

Moreover, Primal Rage includes brutal fatalities and finisher moves that are unique to each character.

Primal Rage is an old-school arcade game that you can play on the PlayStation.

Soul Calibur is one of the best 3D fighting games that Tekken fans will enjoy playing.

It has aesthetically attractive visuals with a diverse selection of characters that have different fighting styles.

The gameplay is similar to Mortal Kombat.

Soul Calibur has a great single-player mode, a story mode, and an arcade mode.

You can play this game on Windows, PlayStation, and Xbox.

Dead or Alive is a 3D graphics game with combo-heavy gameplay.

It’s a significant competitor for Tekken as a fast-paced fighting game.

It’s an easy game to start and pick up on pretty fast, but it has a high ceiling with plenty of DLC available.

There are various fantastic characters with unique moves you can find in the game.

Dead or Alive is available for PC, PlayStation, and Xbox.

Mortal Kombat vs. Tekken (Which Is Better?)