You are here: Home / The Cold Spotlight / Is A Dishwasher A Computer? (Explained) 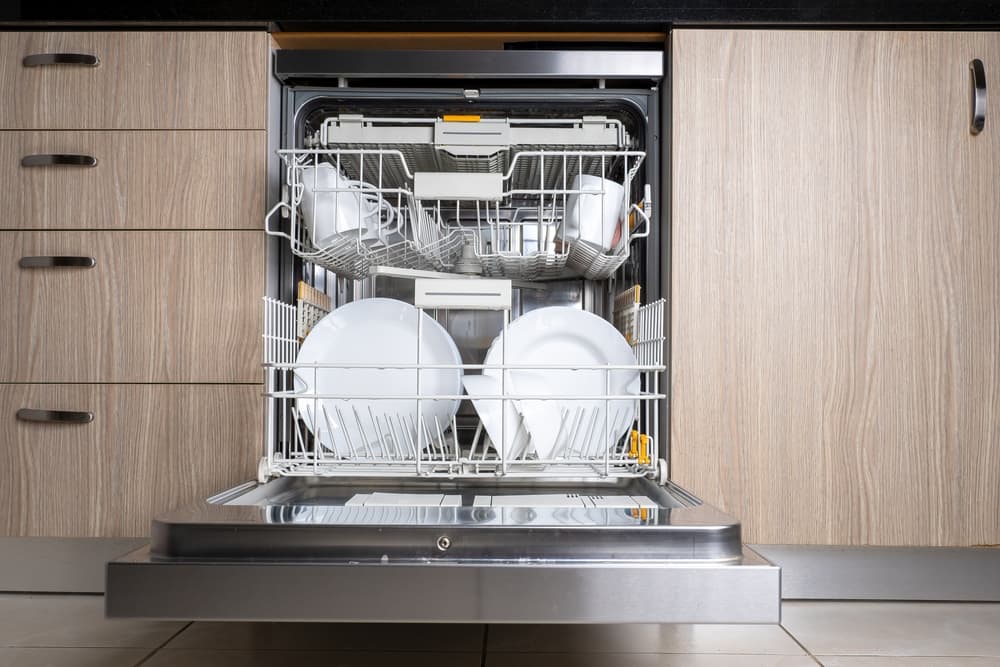 Can you live without your computer?

Probably not, because computers have taken over our lives so widely that we can’t pass a day without using them in one way or another.

However, not every computer has a keyboard, mouse, and case.

Many other devices that help us in our everyday lives also count as computers.

You may wonder whether household items like dishwashers are also computers.

Is A Dishwasher A Computer? 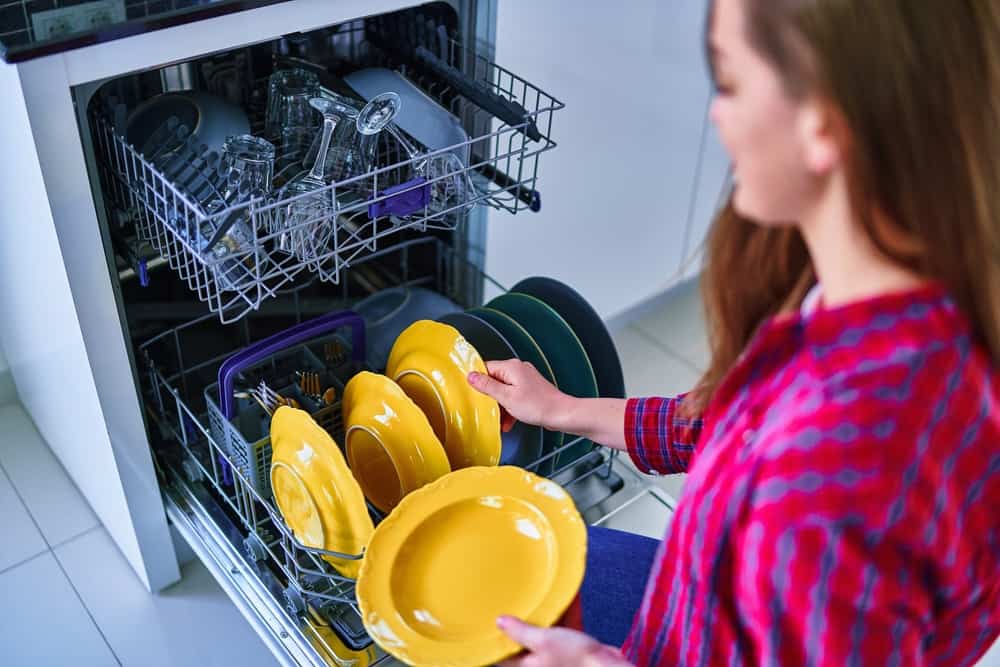 Yes, a dishwasher can be considered a computer.

However, a computer has many more capabilities than a dishwasher, such as handling logical operations, sorting and comparing input, and connecting to other computers.

We can only categorize an electronic device as a computer when it’s programmable, and dishwashers are to some extent.

Most dishwashers have a logic board or microprocessor that controls their operations and keeps track of the wash and rinse cycle duration.

It operates by following instructions given to it through programming languages.

Dishwashers carry out their functions by following instruction sequences already set, and this is pretty much the essence of what a computer does.

Also, some modern dishwashers have a memory to store and process data related to the washing cycles.

In addition, some can connect to Wi-Fi, which is another characteristic of a computer.

Wi-Fi-integrated dishwashers help you control your dishwasher from anywhere and save even more time.

Below are some differences between a dishwasher and a computer:

Differences Between A Dishwasher And A Computer 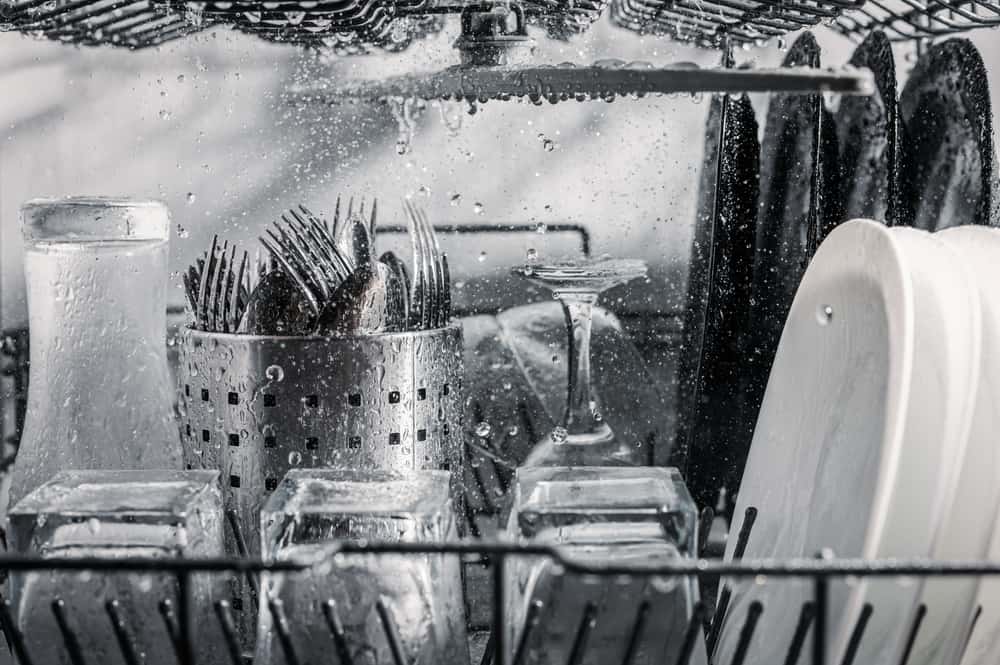 Although we can somehow categorize a dishwasher as a computer, they have fundamental differences, including the following:

They receive data, perform complex operations, and then store the results in their memories.

You can use your computer for many different tasks, such as editing videos, emailing, and browsing the net.

However, even the most recent, smartest dishwashers have only one job: washing your dishes.

You can only select from a finite set of pre-programmed washing options to make your dishes spotless.

Dishwashers have an embedded system, a purpose-built platform designed for fixed functionality or a specific application.

In such devices, every reboot activates a fixed environment to help the machine do its job.

Dishwashers have a set of built-in programs that you can choose from to have your dishes cleaned.

Like a computer, when you choose the program in a dishwasher, you won’t need to intervene until the task is done.

However, there are no tasks beyond those programs that a dishwasher can perform.

You can’t give a dishwasher a new set of rules.

They only do what they can!

The case is very different with computers as they’re highly programmable.

You can give a set of new instructions to a computer so that it stores them in memory and processes the input accordingly.

Computers come with a monitor that can display different types of things, including images, videos, and texts.

This monitor serves as the main interface between the user and the computer, enabling them to perform simple or complicated computing tasks.

However, a dishwasher only has a small display showing the washing time.

You can’t interact with it or change its contents after choosing the washing program.

Computers and dishwashers both come in different sizes depending on their functions.

However, even the smallest dishwashers are larger than a standard PC, let alone a laptop, tablet, or smartphone.

Dishwashers must contain a lot of dishes, and the huge empty space makes them bulky.

A computer only includes a few chips ever-reducing in size thanks to technological advancements.

No matter how much technology advances, dishwashers still need to have enough space for your dirty dishes.

Although dishwashers reduce water consumption compared to hand washing, they use a lot of electricity.

They usually use between 600 and 2,500 watts, with an average of 1,400 watts, and most dishwashers consume around 1.17 kWh of electricity per cycle.

This number is a lot smaller for computers.

A standard desktop and all the attached devices use about 200 Wh altogether.

However, you should consider that we use dishwashers occasionally due to their limited functionality, while computers are on for hours daily.

On average, dishwashers use about 250 kWh a year.

In comparison, a computer that’s on eight hours a day has an annual power consumption of about 600 kWh.

You can generally connect two running computers using Wi-Fi or Bluetooth to transfer data between them.

There’s also software, such as Remote Desktop, designed to facilitate this connection.

However, connecting two different dishwashers is (still) impossible, even with the magic of the internet.

Is A Dishwasher A Robot? 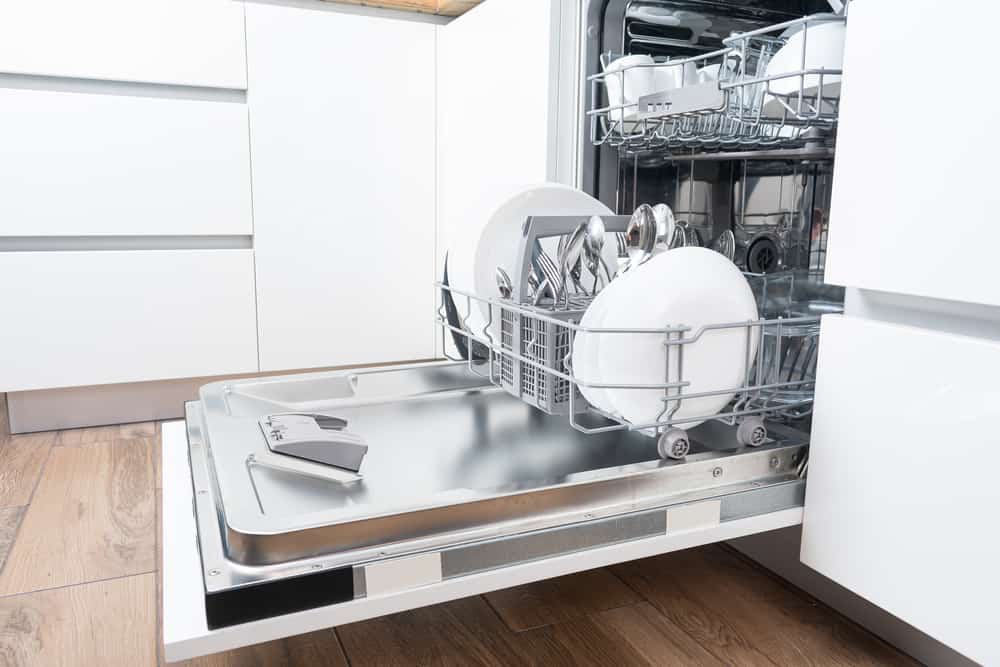 When we think of a robot, we mostly see a picture of a humanoid on the screen of our minds.

However, not every robot has to walk around and fight enemies, as we see in movies.

Although the definition of a robot is vague, some people believe it’s a machine that can carry out a set of actions automatically.

They categorize a dishwasher as a robot that washes and rinses dirty dishes, but only after you load it, add some detergent, select a washing cycle, and push the button.

Although this robot isn’t as autonomous as you would expect, it performs some critical functions on its own, so they call it a robot.

Some of these functions include adding and spraying water when needed, heating it to a specific temperature, dispensing detergent at the right time, and draining dirty water.

However, some would argue that a dishwasher isn’t a robot because all it does is follow preset sequences without perceiving its environment and responding interactively to it.

Many industrial robots also lack this perception, but they have another feature that makes up for it: versatility.

They believe that to call something a robot, it should have some degree of versatility.

In other words, it should have the capacity to be programmed for different tasks, even if it also involves preset sequences.

However, a dishwasher’s hardware can’t adapt to different functions outside of its original domain, meaning that it can only wash dishes and can’t be programmed to do anything beyond that.

Is A Dishwasher AI? 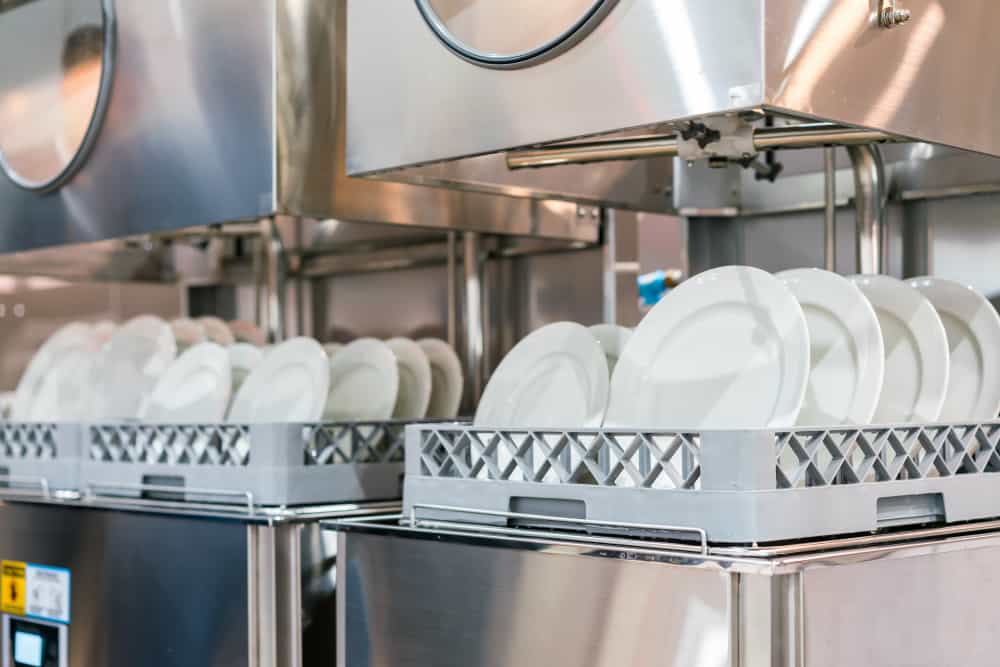 Artificial Intelligence (AI) is a confusing concept because its definition is constantly changing, but what’s certain is that your dishwasher isn’t AI.

Although science fiction is repeatedly telling us that AI is a high-performance robot, it’s not so.

We can simply define AI as “intelligence displayed by machines.”

For example, we say Alexa is AI because it can converse with you through pattern matching and producing output based on the input.

Since we can’t see this level of intelligence in a dishwasher, we can’t call it AI. 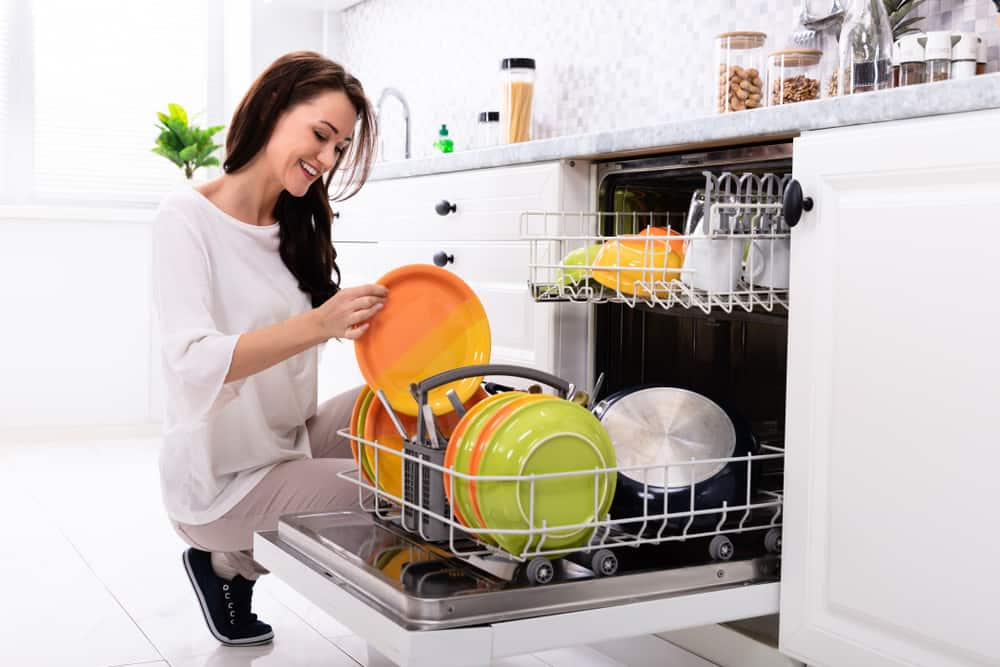 Some of the appliances we use daily raise our electricity bill by large, and a dishwasher is among them.

Depending on its size and usage, a dishwasher uses an average of 1,000 watts of power per hour or about 1,400 watts per cycle.

Some of this energy goes to running the water heater.

The rest is dedicated to other functions, such as releasing the detergent and circulating water.

Even when a dishwasher isn’t used, it still drains some energy.

The electricity your dishwasher uses depends on many factors, such as what cycle you use, when you run it, how often you put it on, and most of all, what model and brand you use.

Knowing how many watts your dishwasher needs, how many times you run it, and the cost of electricity in your area, you can calculate how much you’re paying to run your dishwasher.

Although it seems like a dishwasher’s energy use is higher than hand washing, you should know that this is not true.

Do Dishwashers Save Water? 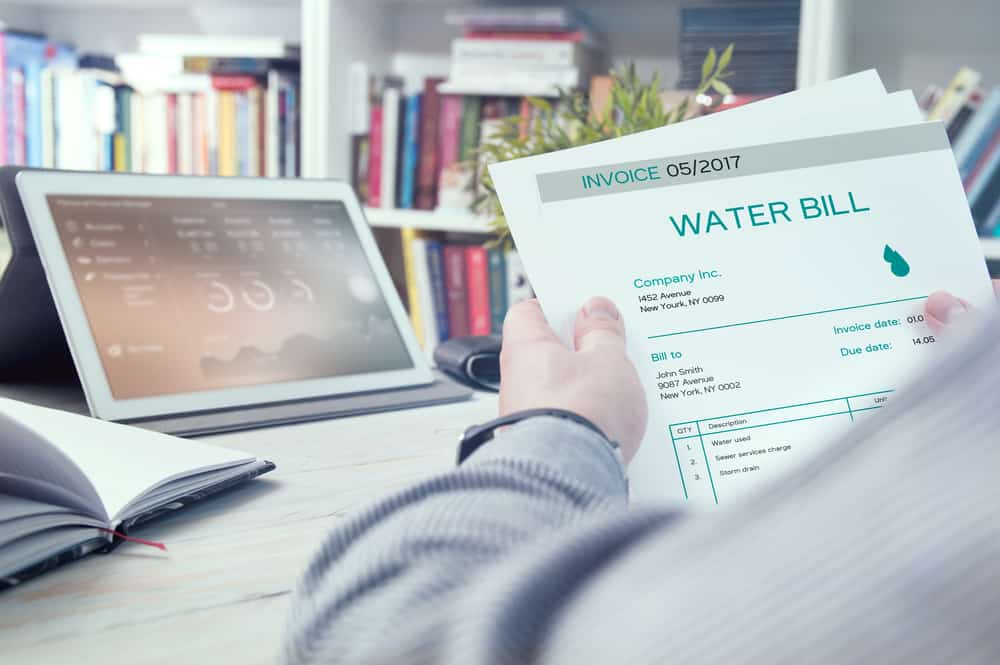 Dishwashers filter the water they use and reuse it during a cycle.

While an energy-efficient dishwasher consumes around three gallons of water per load, hand washing requires about 27 gallons for the same dishes.

This means the amount of water you need to clean a full dishwasher equals that of two minutes of hand washing.

These numbers are for modern dishwashers, but even the older, less efficient dishwashers are more water-saving than washing your dishes by hand.

Your kitchens devour 10% of our water usage, so an eco-friendly dishwasher can be a good start if you want to lead a sustainable life.

How Long Does A Dishwasher Last? 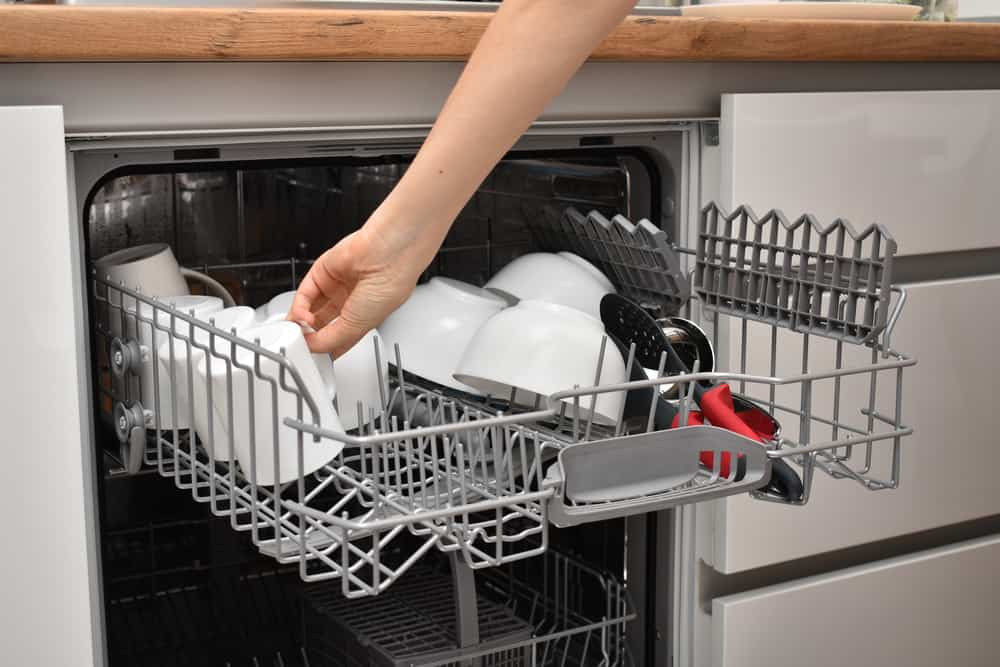 Dishwashers are so convenient that once you have one, you can’t think of living without it.

However, these appliances won’t last forever and have a finite lifespan.

The average lifespan of a dishwasher from most manufacturers, such as Bosch and KitchenAid, is about ten years, while others, such as LG and Miel, last longer.

No matter the life expectancy, many dishwashers will develop issues after the first five years.

How To Run A Dishwasher For Energy Efficiency 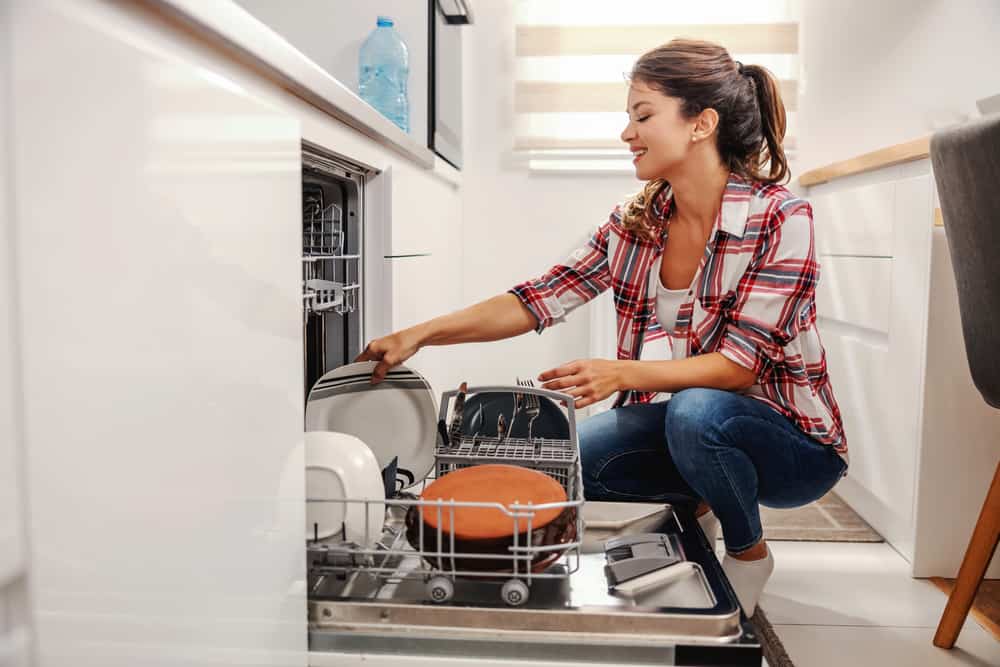 In addition to grabbing an energy-efficient machine, there are other ways to minimize the energy your dishwasher consumes.

A perfect way to use your dishwasher most efficiently is only to run it with a full load.

Don’t feel obliged to run it on days when you have fewer dirty dishes.

Just wait another day until it’s full to prevent wasting energy and water.

However, don’t wait for so long because dirty dishes are a perfect place for germs to grow.

Sometimes, when you don’t have enough dirty dishes to fill the machine, it’s better to wash them by hand.

Although it’s advisable to run your dishwasher when it’s full, it doesn’t mean you should overload it.

Dishwashers clean your dishes by spraying water on them.

Still, water and detergent can’t reach every dish when you overload the machine.

Therefore, your dishes remain dirty and compel you to run the machine again, thus wasting more water, energy, and time.

When your dishwasher is at capacity, keep the remaining dishes for the next round.

Many still believe they should pre-wash their dirty dishes before putting them inside the dishwasher.

However, many detergents need to latch onto the debris to clean more effectively.

4. Run It During Off-Peak Hours

Normally, people use less energy early in the morning and late at night, so these are the best times to run a dishwasher.

Some modern dishwashers have a delayed-start button, which you can set to run at the off-peak time.

Most modern dishwashers have a heated dry option that uses intense heat to dry the cleaned dishes.

This procedure consumes a lot of energy, that’s unnecessary.

It’s better to open the machine’s door and let the dishes air dry to use your dishwasher most efficiently.

If you don’t like air drying or need your dishes as soon as possible, you can dry them with a clean piece of cloth.

General Tips For Using Your Dishwasher Safely And Effectively 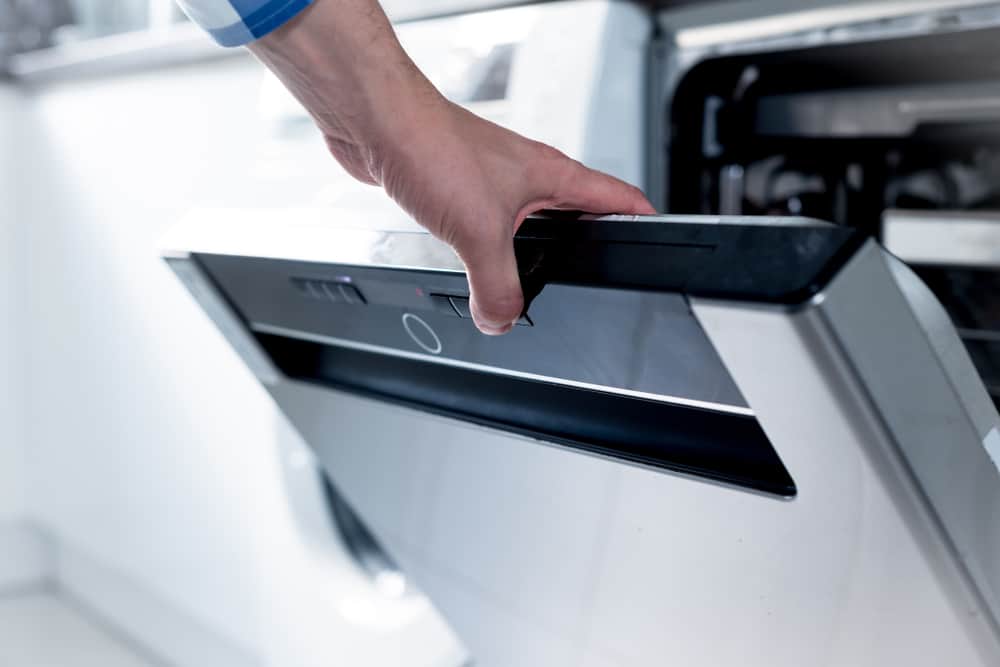 Your dishwasher doesn’t need your help in washing.

Still, it can use some help to operate more efficiently, so consider using the following tips:

Is A Dishwasher A Computer? (Explained)