You are here: Home / The Cold Spotlight / How Tall Is Kim Kardashian? (Her Real Height)

Kim Kardashian is one of the most talked about residents of Hollywood, from her influence on fashion to her struggles with rapper ex-husband, Ye.

When Kardashian isn’t appearing on her family’s hit reality series, you can easily find her on the covers of magazines across the world.

For over a decade, the Kardashian family has been ruled as reality television royalty, and they show no signs of stopping anytime soon.

How Tall Is Kim Kardashian?

Kim Kardashian is 5’2”, making her the second-shortest Kardashian sister, yet still taller than Kourtney Kardashian.

The tallest Kardashian sisters are Khloé Kardashian and Kendall Jenner, who are both 5’10”.

Mother Kris and Kylie Jenner stand at the identical height of 5’6”.

The tallest members of the Kardashian family are Rob Kardashian at 6’1” and Caitlyn Jenner at 6’2”.

During Kardashian’s rise to fame, she was best known as a wealthy Hollywood party girl who was the personal assistant of Paris Hilton.

Shortly after an explicit video of Kardashian and Ray J became one of the first viral celebrity videos on the internet, Kim Kardashian was able to find her own fame separate from her friends in Hollywood.

While everyone was trying to figure out who Ray J was with in the infamous video, Keeping Up with the Kardashians was released, and people couldn’t stop watching the new reality series.

This show cemented the entire Kardashian family into pop culture.

As each of the Kardashian and Jenner sisters has grown into her own identity, you can’t go anywhere in public without seeing at least one of their faces or one of their many brands.

Few families have ruled Hollywood quite like the Kardashians.

How Many Kids Does Kim Kardashian Have?

Kim Kardashian has four children from her marriage to ex-husband Ye, formerly known as Kanye West.

Although the divorce between Kardashian and Ye has been difficult, Kardashian constantly praises her children for bringing her peace and joy even during troubling times.

The eldest of the Kardashian-West children is North West, who was born on June 15th of 2013.

Her family refers to her more often as “Nori” and loves to bring her along with them to fashion shows.

The young North often steals the spotlight from her supermodel mother and aunts.

According to Kardashian, North West is the most creative and unique child of the bunch.

Her mother loves how much of a fashionista mini-me young West has turned out to be.

The second-oldest of Kim Kardashian’s children is her son, Saint West, who was born on December 5th of 2015.

Like his mother, Saint is turning out to be quite the business tycoon and is already an excellent negotiator, at least in the world of Roblox.

Kardashian welcomed her third child, Chicago West, into the world via gestational carrier on January 15th of 2018.

Chicago West is more frequently referred to as “Chi” by her family and has always had an independent nature.

Although Chicago West is the most independent one of her siblings, she still loves to snuggle with her mom and play with her Barbie dolls.

On May 9th of 2019, Chicago West got a twin brother named Psalm West.

Like Chicago West, Psalm West was born thanks to the help of a surrogate mother and is actually Chicago’s twin.

His mother expects that he’ll look a lot more like his older sister as he gets older.

Yes, Kim Kardashian is Armenian, and she is dedicated to ensuring that her children grow up with a deep appreciation of their culture.

Her late father, Robert Kardashian Sr., was a third-generation Armenian-American, and his daughter plans to keep his memory alive in the lives of her children by introducing them to all the same things he showed her when she was their age.

One of Kim Kardashian’s favorite ways to get her children into their Armenian heritage is through food, with her favorite dish being lavash with scrambled eggs.

Lavash is an unleavened flatbread made with water, flour, and salt.

The Armenian dish that Kardashian’s grandmother introduced her to was bishi, which is a fried pancake served for breakfast.

Although the Kardashians’ grandmother passed away long ago, Kourtney Kardashian has become the bishi master who makes the beloved dish for every special occasion.

Every year for Kim Kardashian’s birthday, she will either eat out at the Los Angeles Armenian restaurant Carousel or have them cater a dinner at her house.

The family will also enjoy a large Armenian meal every year on her father’s birthday in remembrance of him.

For the 100th anniversary of the Armenian Genocide, Kim, Khloé, and Kourtney traveled to Armenia with their cousins.

This trip was incredibly meaningful for them because it was a trip that their grandparents and father would have loved to have taken.

During that same trip in 2015, Kardashian and her ex-husband took their eldest daughter North West to be baptized in an Armenian church in Jerusalem.

Four years later, Kardashian and her sister returned to Armenia with their children to be baptized at the Armenian Apostolic Church, the Cathedral of Holy Etchmiadzin.

Kim and Kourtney Kardashian along with Psalm, Chicago, and Saint were all given new religious names.

What Does Kim Kardashian Get In The Divorce From Ye? 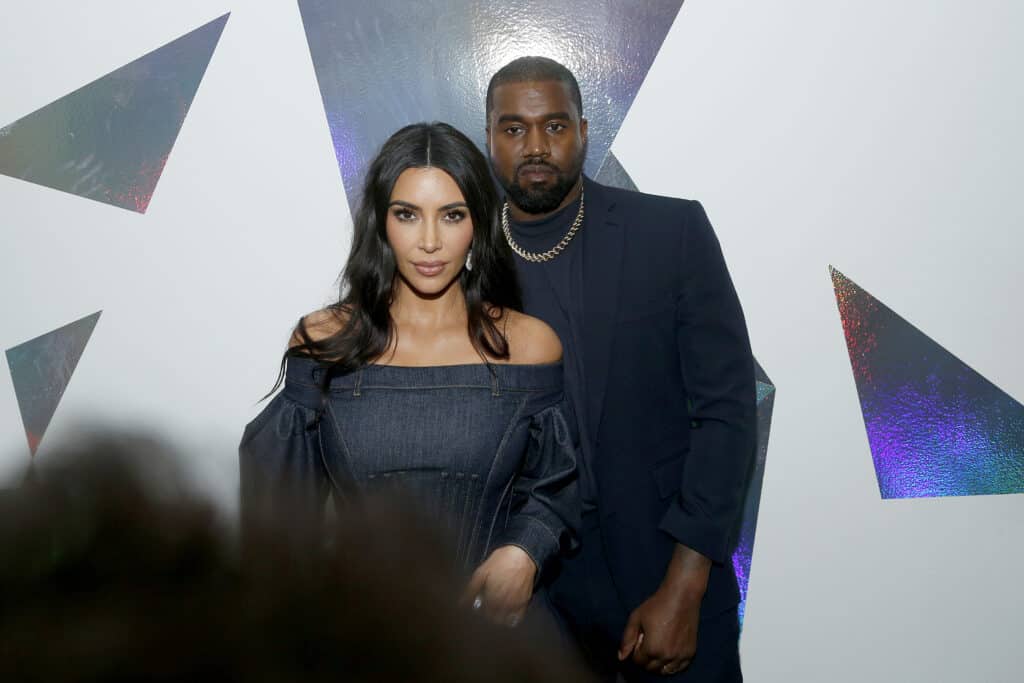 Kim Kardashian is set to receive $200,000 per month in child support and multiple properties that the couple purchased while they were still married to one another.

The terms of the extremely public divorce were finalized in February 2021.

Kim Kardashian will be receiving homes in Riverside and Malibu, California, and three different properties in Idaho.

Her ex-husband will be receiving the infamous Hidden Hills home next to Kardashian’s main place of residence, along with three homes in Calabasas, one in Malibu, and another in Thousand Oaks, California.

Not only will Ye have his California properties, but he will also be receiving two more homes in Wyoming, his childhood home in Chicago, and even a home in Belgium.

With more than $2 billion in assets, their divorce has been one of the most expensive in Hollywood history.

Kim Kardashian and Ye will maintain joint physical and legal custody of their children, with Ye being responsible for covering half of the costs related to medical, educational, and security expenses for their children.

When there are disputes over the children, Kardashian and her ex-husband have agreed to participate in mediation.

By default, a parent will lose their right to decide on a debated issue if that parent fails to show up for mediation.

When Kim Kardashian first filed for divorce in February 2021, she requested that issues of child support and property be separated from her marital status.

This allowed her to restore her maiden name and declare herself legally single sooner.

Since both have created massive business empires for themselves, Kardashian and yet waived spousal support and divided assets, excluding properties, by their prenuptial agreement.

Although her divorce from Ye has been finalized, Kardashian continues to attempt to co-parent and co-exist with Ye as the father of her children.

According to the owner of the dress, Ripley’s Believe It or Not, Kim Kardashian did not ruin Marilyn Monroe’s iconic “Happy Birthday, Mr. President” dress.

A representative from the collection stated, “A report written on the dress’s condition in early 2017 states, ‘A number of the seams are pulled and worn. This is not surprising given how delicate the material is. There is puckering at the back by the hooks and eyes, among other instances of damage.’”

Thank you Ripley’s Believe It or Not! for giving me the opportunity to debut this evocative piece of fashion history for the first time since the late Marilyn Monroe wore it. I am forever grateful for this moment. ✨🕊 pic.twitter.com/XiXNclCEgB

Despite what Ripley’s Believe It or Not has said, fashion enthusiasts and even the man who hand-stitched all 2,500 of the rhinestones on the dress are frustrated by the fact that Kim Kardashian wore this particular dress.

At the time, Bob Mackie was fresh out of college and working for leading Hollywood designer, Jean Louis.

Following Zweig’s 2013 death, his estate decided to auction off the dress once again and it was purchased by Ripley’s Believe It or Not in 2016.

Only a few months before the 2022 Met Gala, Kim Kardashian asked to borrow and try on the famous dress, only to be swiftly turned down.

When Kris Jenner heard about this, she called the collection herself and claimed, “But if somebody says ‘no,’ you know what I say: ‘You’re talking to the wrong person.’”

Although the jet itself only cost $95 million, Kardashian added $55 million worth of design upgrades and renovations to make her private jet the peak of luxury.

To help give her jet’s interior design that signature sense of high-end sophistication, Kardashian enlisted the talents of Tommy Clements and Waldo Fernandez.

Tommy Clements is the creative mind behind Clements Designs, a Los Angeles-based design company that specializes in “easy glamor and grand intimacy.”

Waldo Fernandez is the namesake talent of Waldo’s Designs and has worked for a long list of Hollywood’s wealthiest, including Will Smith, Brad Pitt, and Elizabeth Taylor.

When designing “Kim Air,” Kardashian wanted to break away from the typical dark interiors of jets.

Not only does each seat recline into a single bed, but each seat also can be converted into a king size and comes with its own phone charging port.

The seats are covered in cashmere, which has led Kim Kardashian to be incredibly strict about who she lets on her private jet.

Although the private jet can comfortably fit a party of 10, Kardashian doesn’t let anyone on her private jet who could get her cashmere interior dirty.

When Kendall Jenner considered getting a spray tan in preparation for the family’s trip to Milan for the Prada Fashion show, Kardashian was quick to tell her younger sister that she would not be allowed to sit on her light-colored cashmere seats with a spray tan.

Kardashian paid too much money for that interior to let someone recklessly ruin it.

How Tall Is Kim Kardashian? (Her Real Height)