You are here: Home / The Cold Spotlight / How Tall Is Danny DeVito? (His Real Height)

Danny DeVito is one of the best known actors in all of Hollywood, despite being nothing like the typical male Hollywood star.

DeVito has thrived in the entertainment industry, with his fans flocking to whatever movie theater, television channel, or streaming service releases his latest projects.

This It’s Always Sunny in Philadelphia star has been in the film industry longer than this flagship show has existed and has worked with all the biggest names in Hollywood.

By defying the social norms, Danny DeVito created a completely unique career that has evolved alongside him.

How Tall Is Danny DeVito?

Danny DeVito is 4’10,” despite having a voice and personality larger than life.

It was his authentic New Jersey attitude that landed him his breakout role as Louie DePalma on his first situational comedy series, Taxi.

The very first role that DeVito ever landed was as a thug in the 1970 film, Dreams of Glass, which he followed up by spending time in the theater from 1969 until 1975.

In 1975, DeVito was approached by director Milos Freeman about appearing in the film adaption of One Flew Over the Cuckoo’s Nest alongside Jack Nicholson.

Despite the success of the film, DeVito continued to only be offered small roles and wouldn’t find the level of success that he was looking for until he began appearing in Taxi.

While auditioning for the role of DePalma the dispatcher, he was told that he needed to add more attitude to what he was saying.

Danny DeVito responded by slamming the script on the table and demanding to know, “Who wrote this s***?” The producers immediately apologized and then exclaimed that he was perfect for the role.

Through the 1980s and 1990s, DeVito was able to make an even bigger name for himself as a character actor in movies such as Romancing the Stone, Throw Momma From the Train, Ruthless People, and Twins.

Throughout the late 1980s and 1990s, Danny DeVito was making a name for himself as a director with movies such as Hoffa and The War of the Roses.

In 1992, he worked with Tim Burton to bring DC Comics’ villain Oswald “The Penguin” Cobblepot to life.

In recent years, DeVito has been using his recognizable voice to bring to life such characters as Dr. Seuss’s The Lorax and Satan from the animated series Little Demon.

Is Danny DeVito Making A Sequel To Twins?

Yes, Danny DeVito and Arnold Schwarzenegger will be starring in the sequel to their hit 1988 film Twins, and the new film is set to be titled Triplets, with Tracy Morgan joining as the third brother.

This project has been in the works since 2012, and multiple problems have arisen to set back the release schedule.

One of the most recent situations to occur during the early production of Triplets was the death of the director, Ivan Reitman, at the age of 75 years old.

Originally, filming was going to begin in October of 2022, but the production team decided to let the smoke settle following the death of their director before proceeding.

In March of 2022, Triplets was still looking for a new director to undertake the project, but star Arnold Schwarzenegger was confident that the film would be created despite the frequent setbacks.

While Twins fans are weary of the long-promised film coming to fruition, the film hasn’t been canceled and is still seemingly set to start filming soon, or it may have already begun filming.

When Triplets was first being planned out, Eddie Murphy was originally going to be the third brother.

However, his schedule was already booked, working on Amazon Prime’s Coming to America 2.

The actors were up to just as much trouble off-screen as they were while on-screen, giving DeVito plenty of stories to talk about decades later.

While DeVito was on Jimmy Kimmel Live! with guest host Nikki Glaser to talk about Little Demon, the Hollywood legend talked about the time that he and Schwarzenegger shared a “special cigar” that DeVito had packed partially with marijuana.

The “special cigar” left Schwarzenegger clinging to DeVito for balance.

Does Danny DeVito Actually Know How To Play The Saxophone?

No, Danny DeVito doesn’t actually know how to play the saxophone, despite appearing to play the instrument in Billy Ocean’s music video for When the Going Gets Tough.

Ocean wrote the song to be used in the soundtrack for The Jewel of the Nile, the sequel to the hit film Romancing the Stone., in which DeVito appeared prominently.

Billy Ocean was offered the opportunity by his record label Jive’s boss, Clive Cadler, but Ocean was only given four days to write and record the song.

After watching the film, Ocean was inspired by the scene where Joan and Jack begin discussing their futures and how they have gotten through difficult times in the past.

The line that connected with Ocean was delivered by Kathleen Turner as Joan, with the actress dramatically telling Michael Douglas’s character “When the going gets tough, the tough well, I don’t know what the tough do.”

The music video starred the actors from The Jewel of the Nile, including Danny DeVito, Michael Douglas, and Kathleen Turner.

Throughout the video, you can find the trio singing backup for Billy Ocean.

At one point in the video, Danny DeVito is seen playing the saxophone, but DeVito is only miming and isn’t a real musician behind the sound.

The saxophone solo was actually performed by Vernon Jeffrey Smith.

Since DeVito and his fellow cast members weren’t members of the musician’s union, the video was banned on the Top of the Pops.

Despite the slight bit of trouble that came after the music video’s release, Billy Ocean still believes that the When the Going Gets Tough music video was his favorite video to ever shoot throughout his entire career.

While DeVito and crew may get a bit silly in the music video, Ocean wanted to use this track to inspire people enduring the troubles of life.

Does Danny DeVito Own Jersey Mike’s? 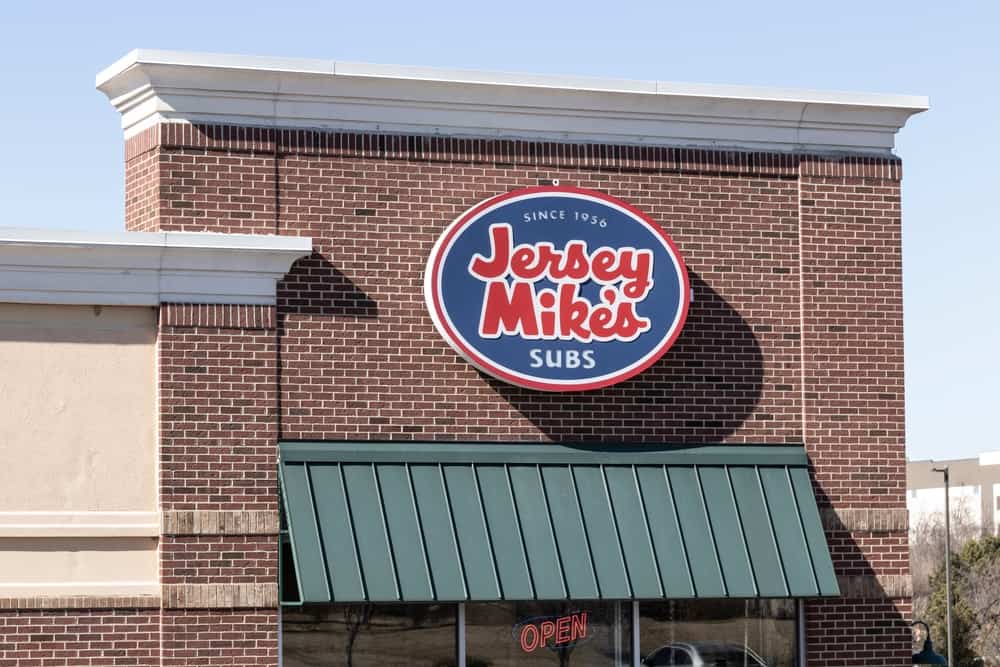 No, Danny DeVito is the spokesperson for Jersey Mike’s and doesn’t own the submarine sandwich franchise.

DeVito is the first celebrity pitchman that Jersey Mike’s has ever brought on and is the perfect spokesperson for the brand.

Since DeVito grew up in Asbury Park, New Jersey, he lived only 10 miles away from the Jersey Mike’s location that started the franchise.

Between his thick New Jersey accent and the large age range in his fan base, Danny DeVito was the perfect person to represent the spirit of the brand.

Similar to a submarine sandwich, DeVito is one of those actors who is a hit among anyone of any age.

His older fans may best know him by his appearance in Taxi, while DeVito continues to gather new fans of a much younger age through his film appearances and his sitcom It’s Always Sunny in Philadelphia.

There was no better spokesperson to bring the genuine New Jersey attitude to the Jersey Mike’s brand than Danny DeVito.

Did Danny DeVito Own A Restaurant?

This Italian chop shop focused on serving the freshest prime meats and seafood, with their signature meal consisting of 3 steaks from the United States, Australia, and Japan for $325.

DeVito was inspired to take his first step into the world of being a restaurateur following a conversation he had with financier Michael Brauser, who had worked in the South Beach area for years.

The pair met each other while DeVito was vacationing with his wife on the Greek island of Santorini.

Although the idea behind DeVito South Beach was unique enough to stand out among the crowd, the execution of the restaurant couldn’t have gone much worse.

A scandal killed the high-end hot spot when news broke out that the staff was getting cheated out of tips and even hourly wage.

One of the 12 employees that sued Danny DeVito and his restaurant reported that there was a week where she was only paid for 38 hours out of the 60 hours she had worked.

As if making employees work for no pay for the majority of their workweek wasn’t bad enough, the employees were also losing out on valuable tips that were meant to go directly to them.

Despite handing out at least 11 confidential settlements, the chop house’s secondary owner David Manero claimed that they were innocent and that they weren’t doing anything that wasn’t industry standard.

Manero even claimed that none of the ex-employees ever reported any discrepancies with the restaurant’s office.

A portion of the tips would go towards paying the hostesses, which the restaurant should have paid for themselves, and another portion would go to a sommelier whether he worked that night or not.

Who Is Danny DeVito Married To?

Danny DeVito is still married to Rhea Perlman, despite publicly separating from each other first in 2012 and again in 2017.

Despite being separated for years, the pair maintained a close personal relationship and saw each other frequently due to having a family together.

DeVito and Perlman first met in 1971 on the set of a stage production of The Shrinking Bride and quickly fell in love.

After only 2 weeks of knowing each other, the pair moved in together and were married 11 years later on January 28th of 1982.

This classic Hollywood couple went on to have 2 daughters and a son together.

During an interview with People magazine, Rhea Perlman admitted that she occasionally wishes that she and Danny DeVito were still together romantically.

Although Perlman will admit that the days she spent fully invested in her relationship with DeVito were “the glory days”, she has learned to see this new stage of her life as “other kinds of glory days.”

Now that Perlman and DeVito have entered a “different kind of relationship”, they’re able to navigate life more smoothly and continue working together.

This form of relationship allows Perlman and DeVito the freedom to do things separately and as a couple.

Both DeVito and Perlman agree that familiar ties are the most important relationships.

As a couple, the duo starred in Taxi and would later play Zinnia and Harry Wormwood in the film adaptation of Mathilda.

In 1992, DeVito and Perlman founded Jersey Films and were the producers behind Garden State, Erin Brockovich, and most notably Pulp Fiction.

When the couple first announced that they were separating from each other in 2012, the public was shocked by their announcement.

Perlman and DeVito attempted reconciliation shortly after their announcement, but they separated for a second time in 2017.

How Tall Is Danny DeVito? (His Real Height)