You are here: Home / The Cold Spotlight / Does Tilapia Have Bones? (Everything To Know) 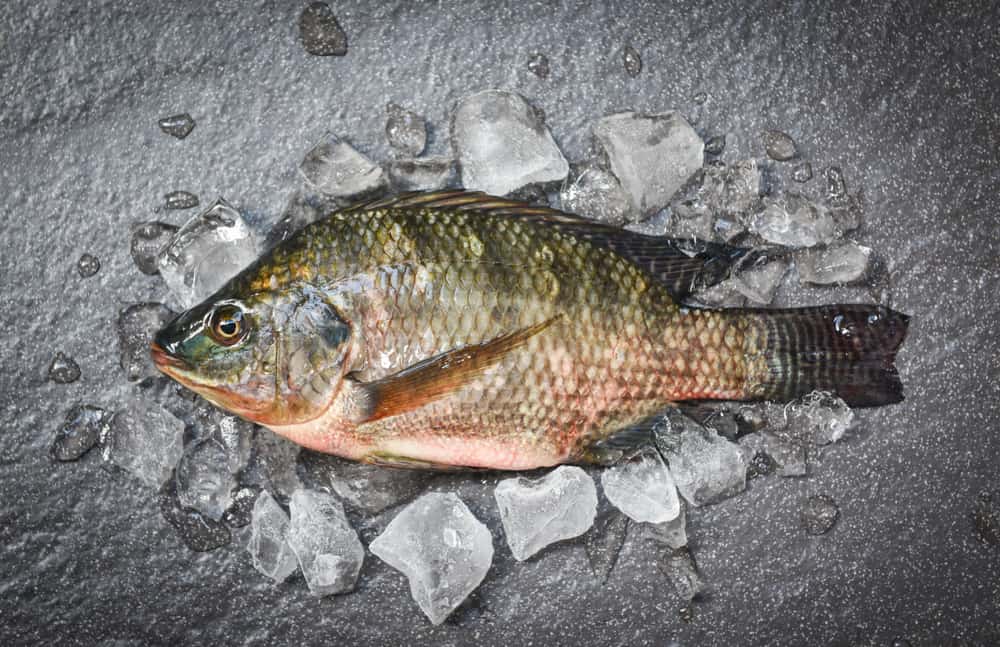 Tilapia is a delicious fish that many fish lovers prefer over other fish, like salmon or cod.

It can be difficult to cook any kind of fish at home, and you’ll always want to know what you’re getting yourself into before cooking.

Tilapia pairs well with a multitude of flavors, whether you coat it in basil and thyme or simply add a little lemon to bring out tilapia’s natural flavor.

Before you cook any fish, you should always check to see whether or not it has bones.

Does Tilapia Have Bones? 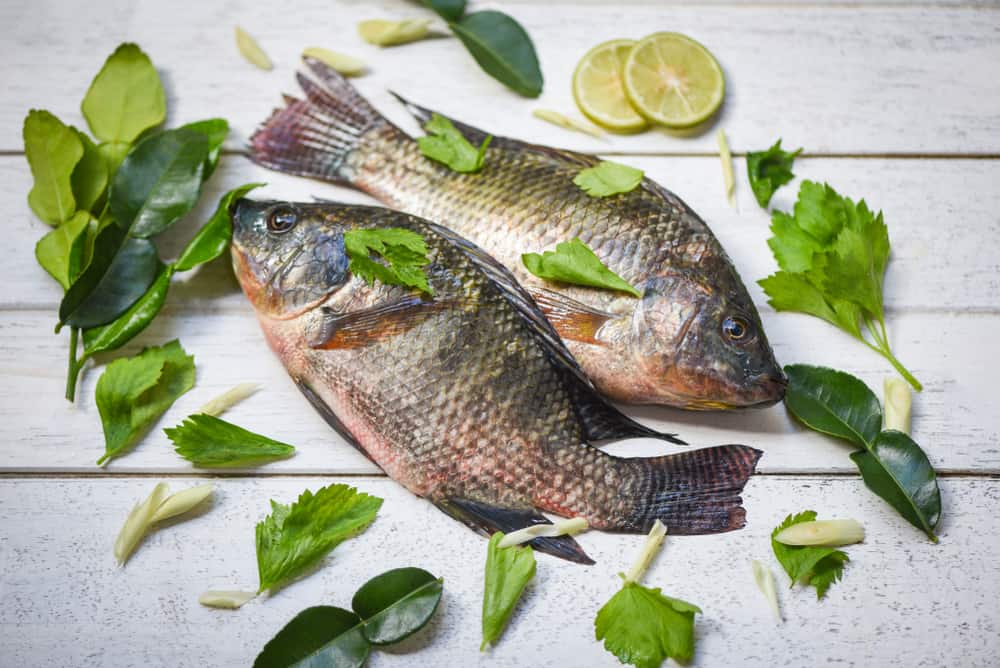 Similar to almost every other fish in the water, tilapia naturally has bones.

Almost all fish are vertebrates, meaning that they have spines and bones.

As a matter of fact, tilapia have hundreds of bones that help the fish swim around whatever body of water they’re in.

There are only a few fish that don’t have bones, such as the blobfish and jellyfish.

Tilapia are actually a part of a group of fish called Osteichthyes.

Oste- refers to bones in both Latin and Greek.

There are more than one hundred different species of tilapia that live around the world.

In order to cook tilapia, you’re going to have to take into consideration where you got the fish from.

If the fish is fresh and still fully intact, then the tilapia will have bones in it.

If you got it from your local butcher or grocery store as a filet, you will most likely not find any bones in the fish.

Occasionally, if a fish isn’t deboned properly, there may be a few small bones in the flesh.

Luckily, the bones are pretty easy to spot and check for, as long as you’re looking for them.

Tilapia is the fourth most popular fish to eat in the United States, with the average American eating one pound of tilapia each year.

Tilapia is only beaten by Alaskan pollock, salmon, and tuna.

It is also an affordable fish to eat thanks to the sheer number of them that are swimming around in the ocean and how easy it is to breed the fish.

The ancient Egyptians even favored breeding and eating the fish.

Tilapia may have a mild taste, but the health benefits of eating tilapia are out of this world!

How Healthy Is Tilapia? 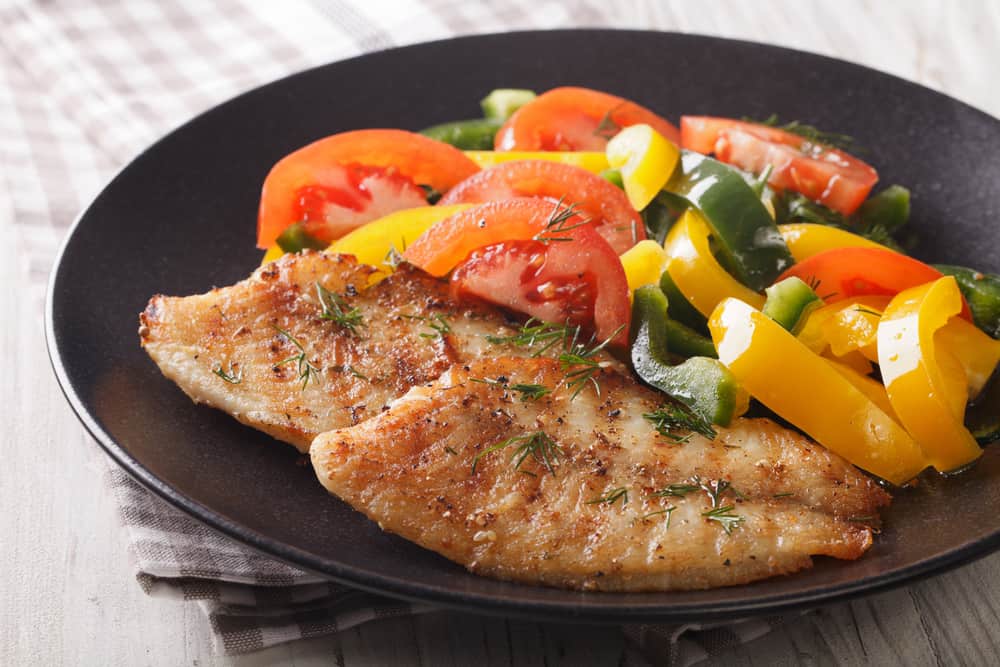 Tilapia packs a punch when it comes to health benefits.

In one three-ounce fillet, you’re getting 22.8 grams of protein, 2.3 grams of healthy fat, and absolutely zero grams of carbohydrates.

You get all of this while only consuming 111 calories.

If you’re looking for a fish that is packed with Omega 3, then you may want to turn your attention towards salmon or tuna.

However, tilapia still has more Omega 3 than red meats or fowl.

If you’re looking for a meal for someone who may have trouble with cholesterol, then tilapia is an excellent choice.

Where tilapia lacks in Omega 3, the fish makes up for in Omega 6, a fatty acid that helps lower and control your cholesterol.

Omega 6 is also responsible for helping insulin levels, which determine how well your body can turn sugar into energy.

Tilapia makes for an incredibly beneficial meal for those with diabetes.

Tilapia is low in mercury, unlike many other species of fish.

Even expectant mothers can enjoy some tilapia.

If you are pregnant, then you should still limit yourself to eight to 12 ounces of fish per week.

Tilapia has 12 milligrams of calcium.

Calcium is responsible for helping keep your bones strong and your heart beating and telling your muscles when to contract.

Tilapia also has 47 of the 55 micrograms of selenium that your immune system, reproductive system, and thyroid gland need in order to work properly. 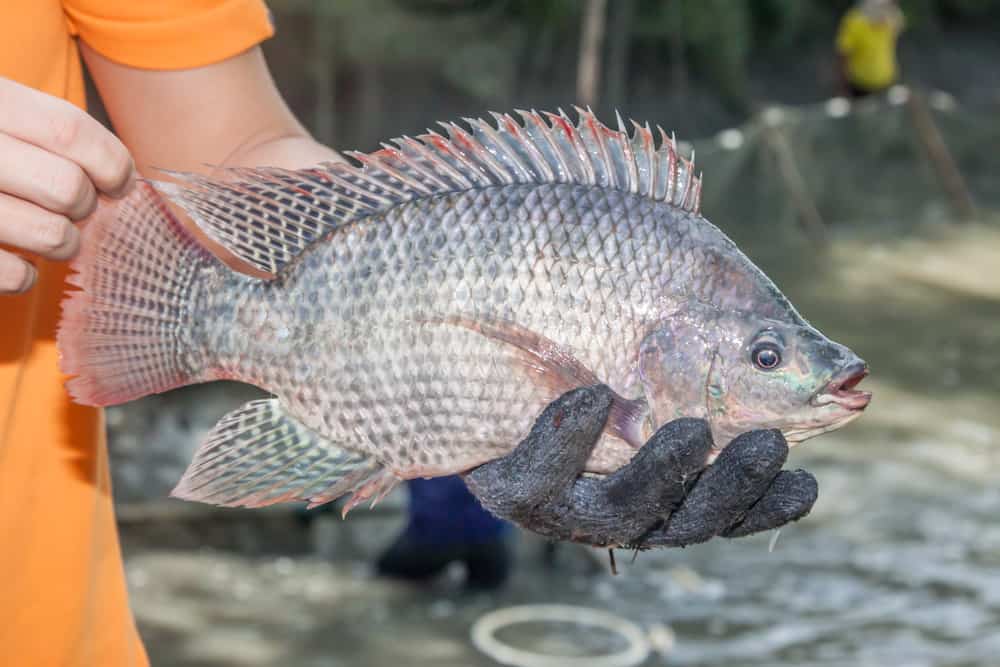 The Nile tilapia, Mozambique tilapia, and the Blue tilapia are the three most commonly consumed species.

Although each species share the name “tilapia”, they are very different.

The Nile tilapia gets its name from where the ancient Egyptians originally bred it.

Humanity has been breeding Nile tilapia for more than 4,000 years!

On average, Nile tilapia grow to be anywhere from one to two pounds.

Normally, tilapia prefer to live in water that is about 80 degrees Fahrenheit.

Strangely, the fish will not breed unless the temperature of the water is at least 75 degrees Fahrenheit.

The Mozambique tilapia hails from Africa, but it was introduced to Florida’s fresh waters to control some aquatic vegetation that become too much for the ecosystem.

You can spot this fish in the wild by looking for its olive-gray coloring with its yellow belly.

Unlike the Nile or Blue tilapia, the Mozambique tilapia will die if the water temperature is too cold.

They aren’t as hardy as some other species of tilapia.

The average Mozambique tilapia is about two pounds and can grow to this size in only a year, making it noticeably larger than the Nile tilapia.

The Blue tilapia is the biggest out of the three most common species of tilapia.

You can find this fish all over North America and the Middle East.

You may find Blue tilapia and Mozambique tilapia swimming in the same bodies of water in Florida.

The Blue tilapia’s name comes from the grayish-blue tone that covers its body.

Tilapia Is A Saintly Fish 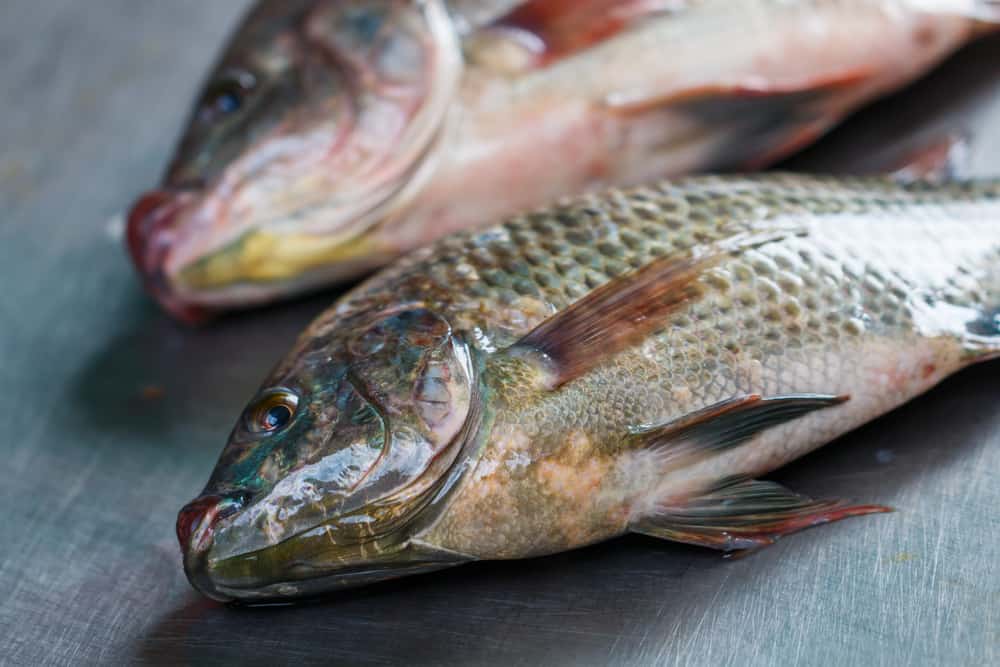 If you went to Sunday school as a child, then you have probably heard of the story where Jesus fed 5,000 people with two fish and five loaves of bread.

Theological historians have determined that the fish that Jesus used to feed all those people was most likely tilapia, which has earned the fish the nickname “St. Peter’s Fish“.

During the biblical story, Jesus is giving a sermon on a mountain near the Sea of Galilee.

The Redbelly tilapia has called the Sea of Galilee home for thousands of years.

The Redbelly tilapia is quite the unique tilapia out of the genus.

Redbelly tilapia are extremely tolerant of salty water conditions, which is why it is able to make the Sea of Galilee its home, despite tilapia normally being freshwater fish.

As their name states, Redbelly tilapia are identifiable by their red bellies and striped body which is a soft, golden yellow with black stripes.

Redbelly tilapia can grow up to be about a foot and a half long at maximum. 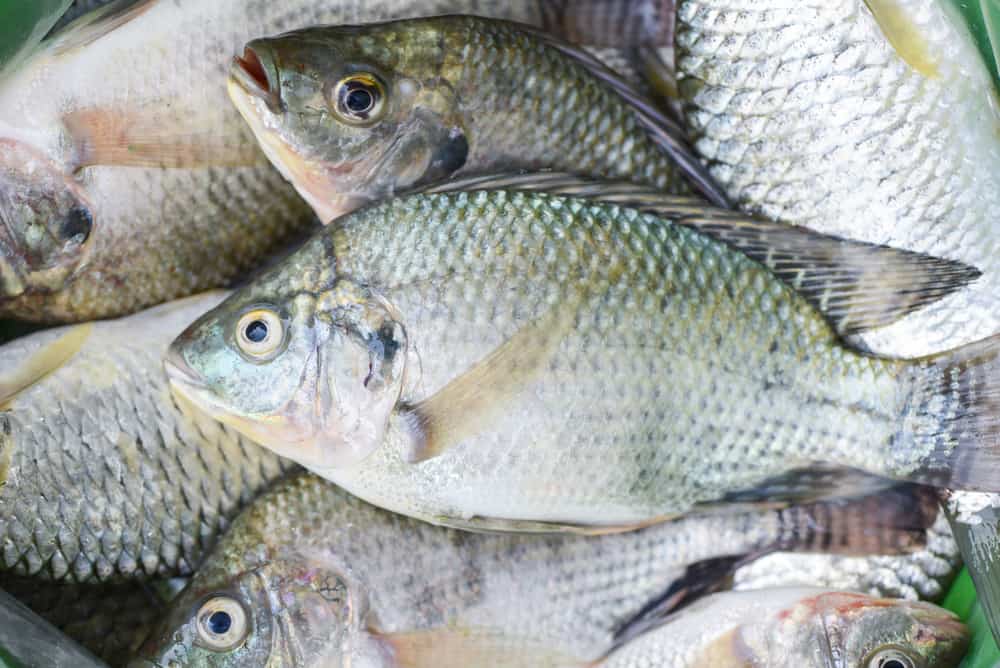 The ancient Egyptians had a deep respect for the tilapia that they raised.

Not only was tilapia one of the most common foods they would eat, but tilapia also held a deep connection with their religion.

Ancient Egyptians would paint tilapia in their tombs as a sign of rebirth.

Due to the ease that came with breeding tilapia, they also saw tilapia as a symbol of fertility.

Families would create tilapia amulets for the women of their families to help them to conceive a child more easily.

These amulets were called nekhau.

They were made of gold and had a colored glass, turquoise, or feldspar in the center.

Not only did tilapia help ancient Egyptian women, but they also helped Ra, the sun god, steer his boat through the netherworld.

In paintings, tilapia are seen surrounding and powering Ra’s boat.

Tilapia would also warn Ra about the netherworld serpent, Apophis. Also known as the Great Serpent, Apophis is the arch-enemy of Ra.

He is associated with chaos and darkness.

With the help of his tilapia army, Ra would defeat Apophis the Great Serpent.

The Healing Properties Of Tilapia Skin 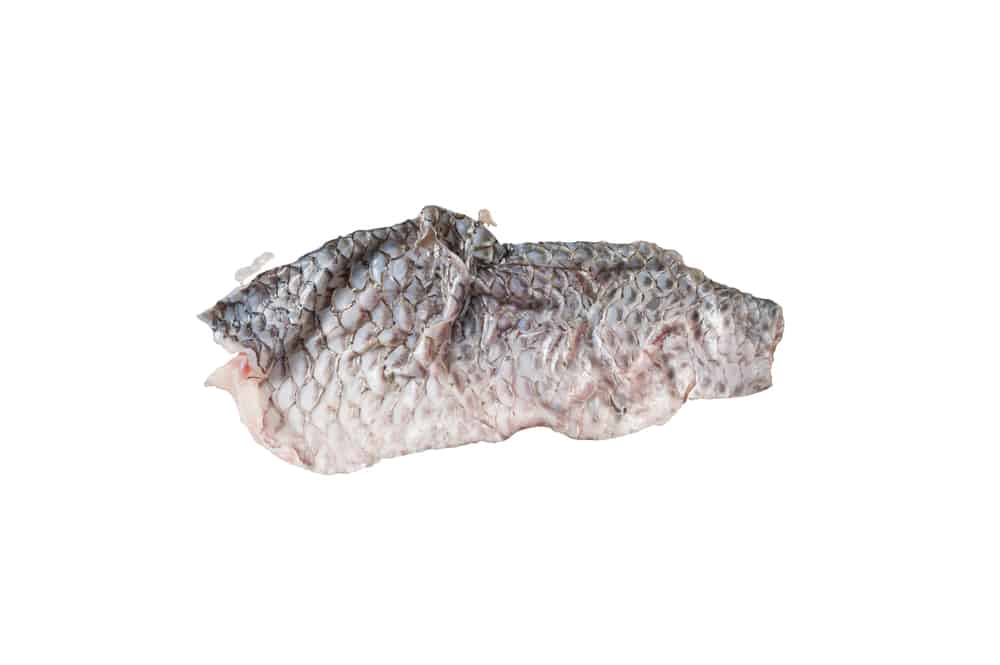 Tilapia makes for an incredibly healthy meal, but tilapia is good for more than just eating.

Doctors in Brazil have discovered that tilapia skin can be used to effectively treat and heal burn victims.

While it may sound a little gross to rub fish flesh all over an open, severe burn, it is actually one of the most effective means of treating the injury.

What makes tilapia skin the perfect solution for burn victims is the non-infectious microbiota, high amounts of type I collagen, and shockingly similar morphological structure to human flesh.

The microbiota of a creature is the collection of microorganisms that live in a certain part of the body.

Type I collagen is the type of collagen that your skin is mostly made up of.

Your morphological structure is the biological term for the way your body or a part of your body is set up.

In Brazil, one burn victim had deep burns from a gunpowder explosion that left his upper limbs in shambles.

If the patient were not treated properly, he could have been stuck in the hospital long-term, disfigured, or even disabled.

His doctors wrapped his wounds in tilapia skin, which he wore for 17 days.

Every 72 hours, he would get his wounds redressed by the staff.

By the end of the 17 days, there were massive improvements in his condition, and he was left with only scarring.

This case led to tilapia skin being the first animal skin treatment to be approved for burn treatment by the National Sanitary Surveillance Agency.

Who Knew Tilapia Was So Important? 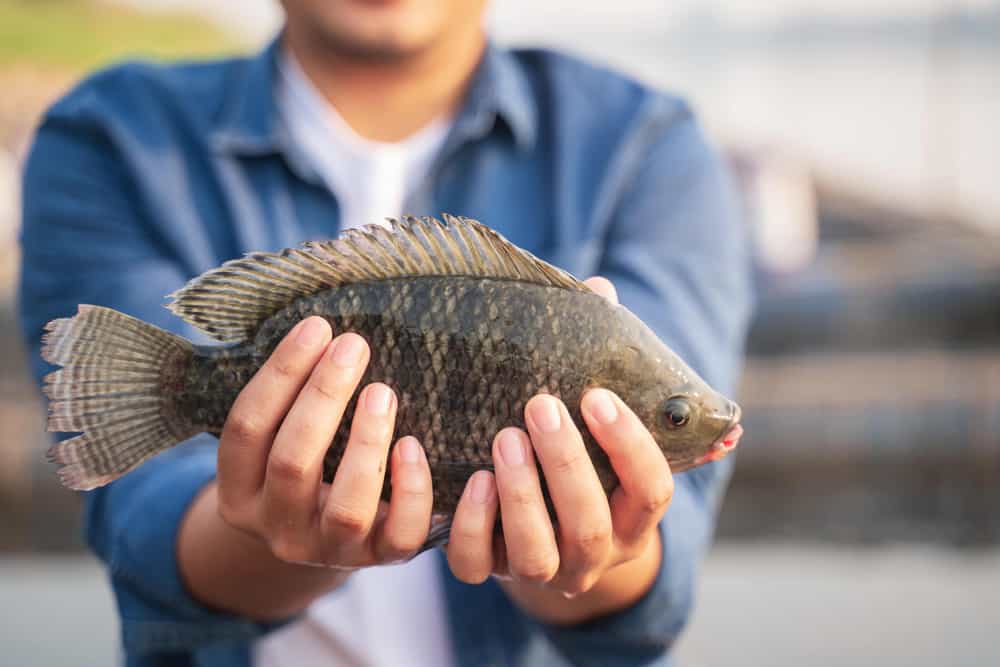 Tilapia have been feeding and aiding humanity for thousands of years.

With the abundance of tilapia around the world, they have made themselves an excellent meal and even better remedies for a multitude of issues.

These fish make excellent meals for those who are diabetic, expecting a child, or breastfeeding.

With plenty of Omega 6 and selenium, tilapia make a great addition to a healthy diet.

Tilapia have been important to humanity throughout our history.

In Christianity, they are believed to have been the famous fish that fed the thousands of people who flocked to hear Jesus’s sermon on the mountain.

In Kemetism, tilapia were the noble protectors of conceiving women and assisted the sun god, Ra, in defeating the Great Serpent, Apophis.

Tilapia supported the Kemet hero of all things good to win the battle against the creature of pure evil and chaos.

Even medical professionals have found ways to make tilapia even more beneficial for humanity, using them to create a safer and more effective way of treating burn victims.

According to the World Health Organization, 180,000 people die each year from severe burns, and this medical discovery could save the lives of those who are badly burned.

Tilapia is an excellent choice of fish which is often underappreciated solely due to the fact it doesn’t have as much Omega 3 as other commonly eaten fish.

Does Tilapia Have Bones? (Everything To Know)