You are here: Home / The Cold Spotlight / Does AutoZone Take Used Oil? (2023 Updated) 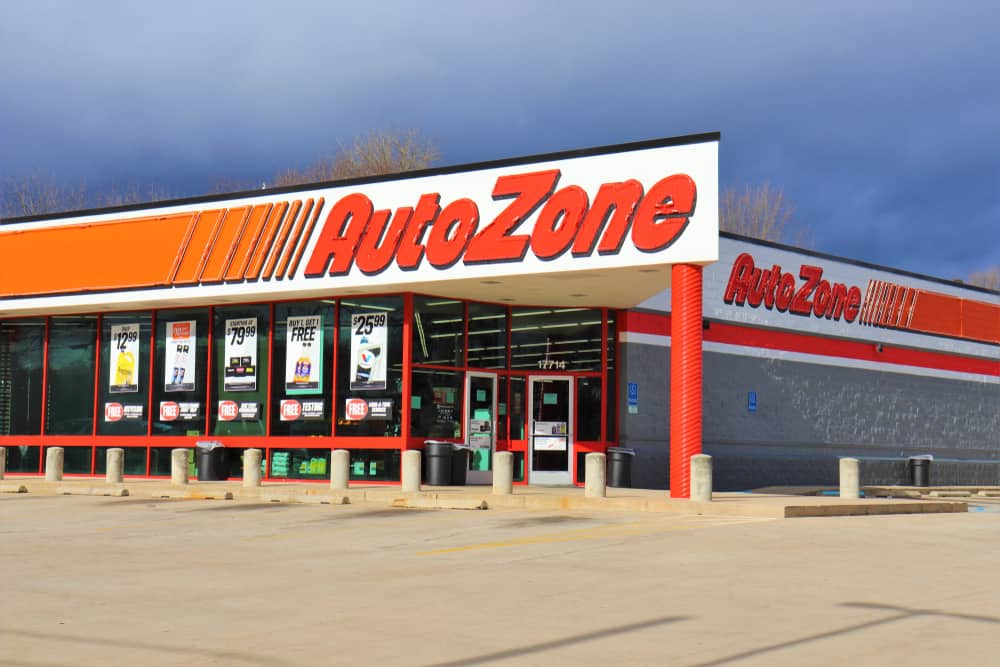 If you perform your own oil changes at home, it can be difficult finding a place to deposit your used oil.

It’s unsafe to throw it down a drain or in the sewer, as it can cause drastic harmful effects on the environment.

It’s always good to have a place in mind that accepts used oil before even attempting to do your own oil change, as this might affect whether you do it yourself at home or take your car to a professional auto tune-up shop.

More than 200 million gallons of used oil are improperly disposed of every year, with less than 60% of our used oil being recycled in the United States.

These statistics draw attention to the importance of proper disposal and recycling of motor oils. 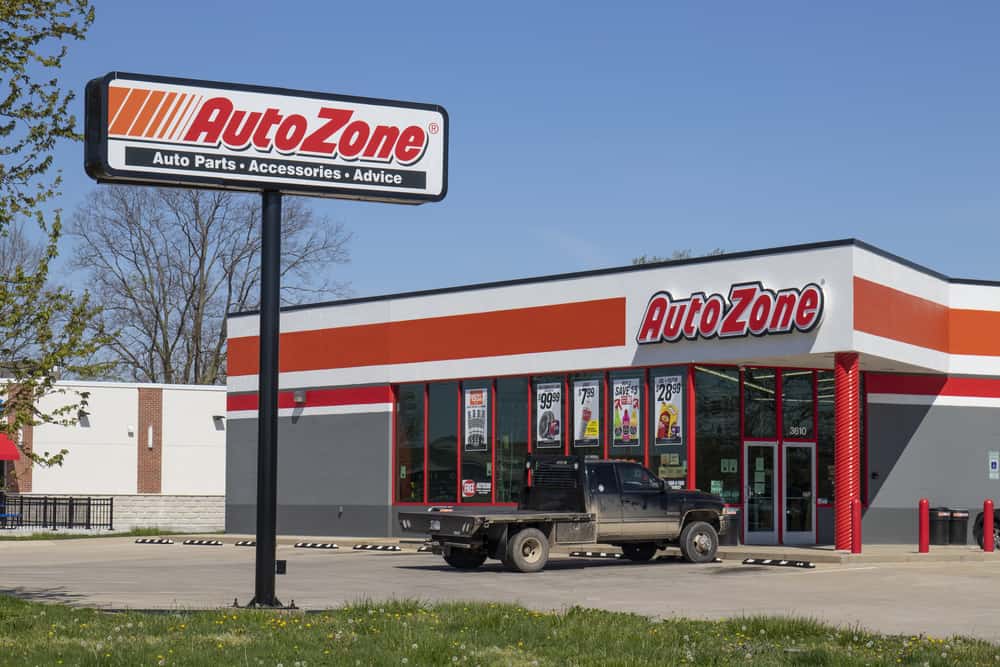 Yes, all AutoZone locations nationwide take used oil. It is also completely free to recycle your used oil at AutoZone.

In 2021, AutoZone recycled 12 million gallons of old motor oil and is on schedule to recycle even more in the coming years.

It’s recommended that you check with your local AutoZone to ask about its oil recycling program, as each location may have a different system.

With more than 6,000 locations across the country and Central America, recycling used oil is now more convenient than ever.

Typically, you can only recycle up to five gallons a day, with a maximum amount of 25 gallons a year.

You’ll also need to contain your used oil in a safe and leak-proof container before bringing it in.

How To Collect Used Oil For Recycling 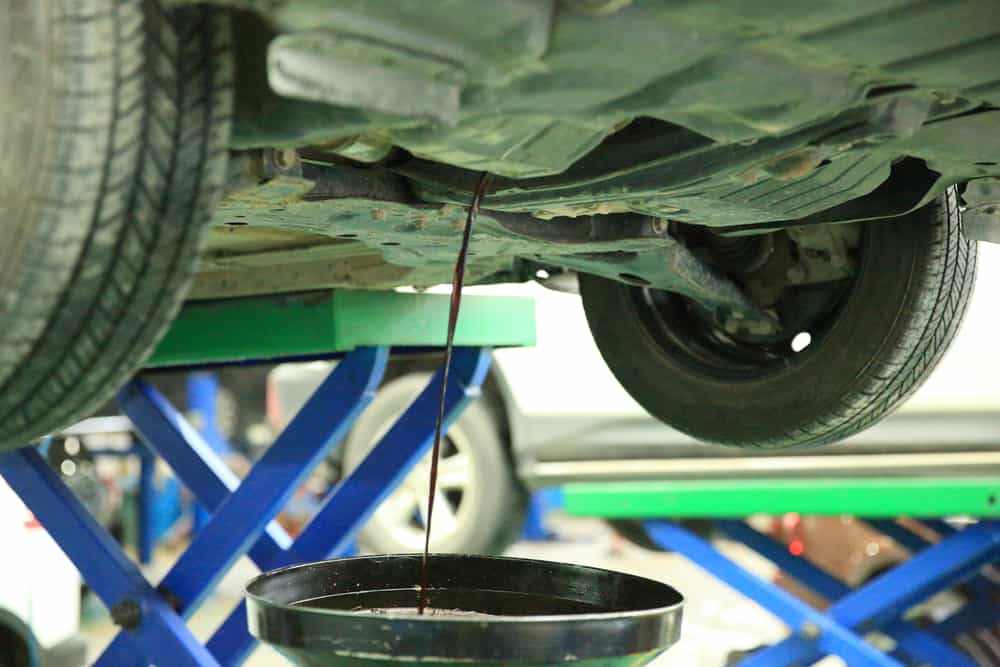 There are four easy steps to successfully collecting used oil from your car.

It’s suggested to place the used oil in either the original oil container if you still have it, or a container made of polyethylene or another heavy-duty plastic.

Take note that motor oil that’s been mixed with other fluids, like washer fluid, gasoline, or water, isn’t recyclable.

Therefore, you must ensure the storage container you choose has never been used to store other fluids at any point.

Do not use containers such as milk cartons, empty juice containers, or other containers that may have any residue of previous liquids in them.

You should also avoid using containers that once held bleach, cleaners, or other automobile fluids, like antifreeze, as well as paint cans, gasoline containers, and other metal containers.

If you can’t immediately drop off your used oil for recycling, you should store used oil in its proper container in a cool and dry place and away from anything that can disturb it.

What Are Other Used Oil Recycling Options? 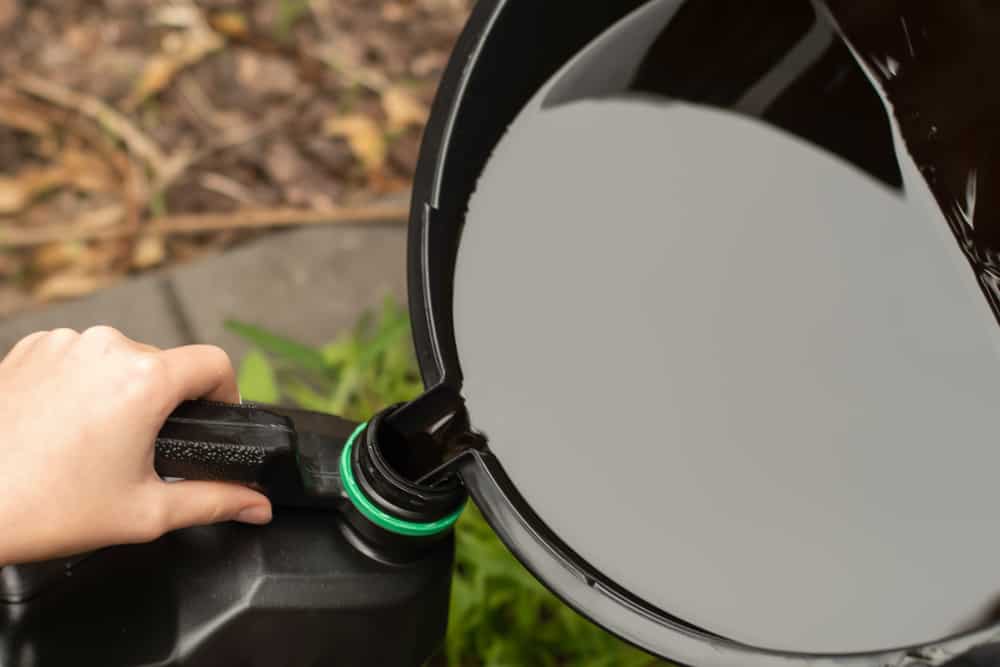 Some counties and cities across the country accept used motor oil as part of their curbside recycling programs.

Each county or city will have its own requirements, so it’s important to research these before recycling your used oil.

It is definitely not recommended to simply just put your used oil-filled container inside your recycling bin.

If curbside recycling for motor oil isn’t an option in your city, there are some other options.

They suggest taking your used oil to participating service stations, auto repair shops, and quick lubes, as many of them accept used oil.

You can also check on the Earth911 website and enter your zip code to find places near you that will recycle your used oil.

This website is great also for learning where to recycle just about anything near you.

Why Should You Recycle Used Oil? 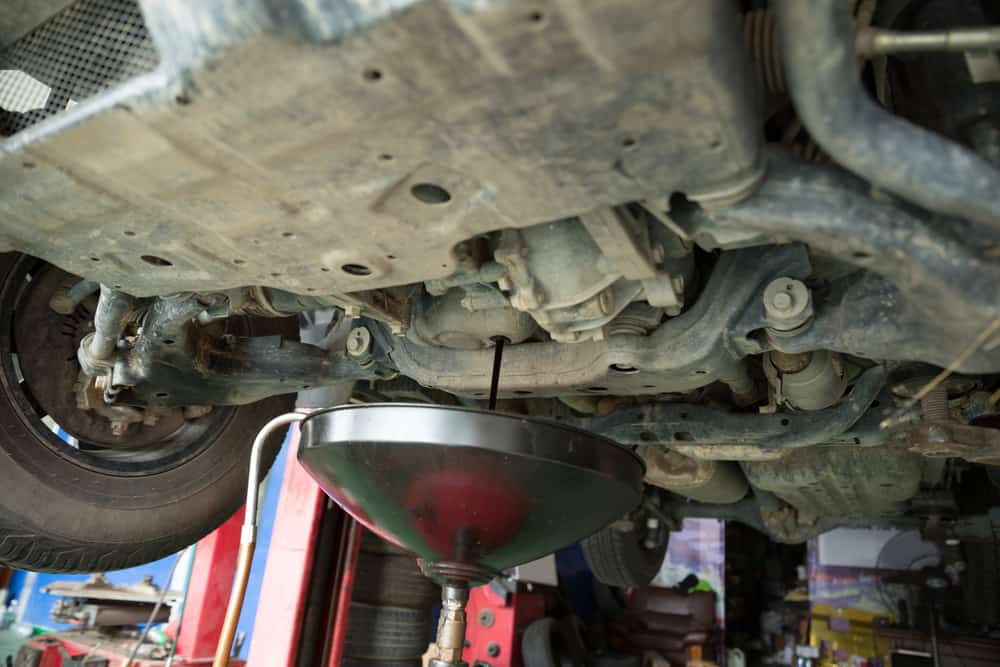 If you do your own oil changes, it’s vitally important to recycle your used oil responsibly.

Most people know how to go about recycling plastic or paper, but few know how and why to recycle petroleum or motor oil.

If someone is unfamiliar with the proper oil recycling processes, their actions can lead to harmful consequences.

One gallon of used oil can contaminate one million gallons of water, making properly disposing and recycling that much more crucial to environmental health.

By recycling your used motor oil, you’re helping to keep our rivers, lakes, streams, beaches, and groundwater clean and safe.

Pouring used oil down the gutter or in the storm drain can also harm or kill the animals and plants that live in or near those bodies of water and habitats.

In addition, proper recycling helps keep oil out of our drinking water.

Recycling used oil is the ethical and responsible thing to do to ensure years of clean water enjoyment, as well as lessen your carbon footprint.

To put things in perspective, according to AutoZone, “Two and a half quarts of clean, user-ready motor oil requires a whopping 42 gallons of crude oil to produce.

However, that same amount of clean oil can be repurposed from just a gallon of previously used motor oil.”

It’s also illegal to dispose of your used motor oil incorrectly, and this can lead to serious repercussions.

Those who choose to ignore these laws may be fined, face jail time, or be held responsible for any clean-up costs.

What Does AutoZone Do With Used Oil? 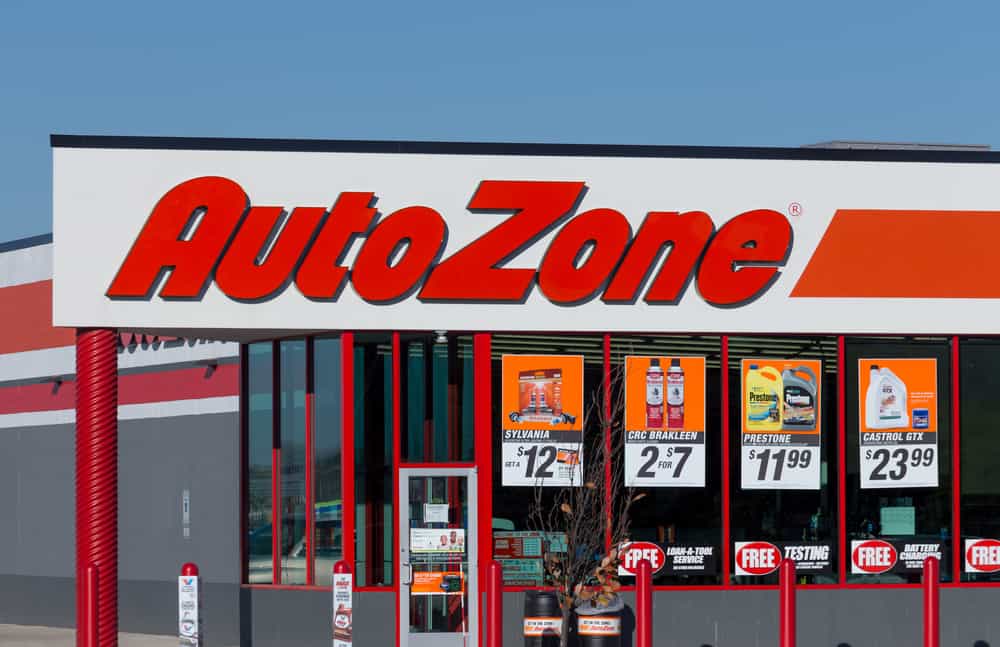 After used oil is dropped off at their locations, it’s gathered and transported to processing facilities where it is then filtered.

It’s also examined for contamination and separated into different grades.

How and where the oil is distributed, sold, or used is dependent on the grade.

AutoZone recycles its used oil in a few different ways.

One way in which the company recycles used oil is to use it as industrial fuel for its own delivery trucks, saving them from purchasing fresh oil for its vehicles.

Used oil can also be used as a lubricant for gears and brakes and as transmission fluid.

Some of their recycled oil is also used in the building of asphalt roads and parking lots, and as fuel for power plants.

When used to burn for energy, large industrial boilers are able to burn the used oil, creating minimum pollution and making used oil a desirable product for power plants and cement kilns.

Small quantities of used oil can be used in specially designed space heaters for small businesses.

Used oil can also be refined into a base stock, which is then used for lubricating oil.

The refining process works so well that the end result is often as high in quality as virgin oil.

Whatever way it’s used, recycled motor oil can be refined and redistributed essentially over and over again.

What Else Does AutoZone Accept For Recycling? 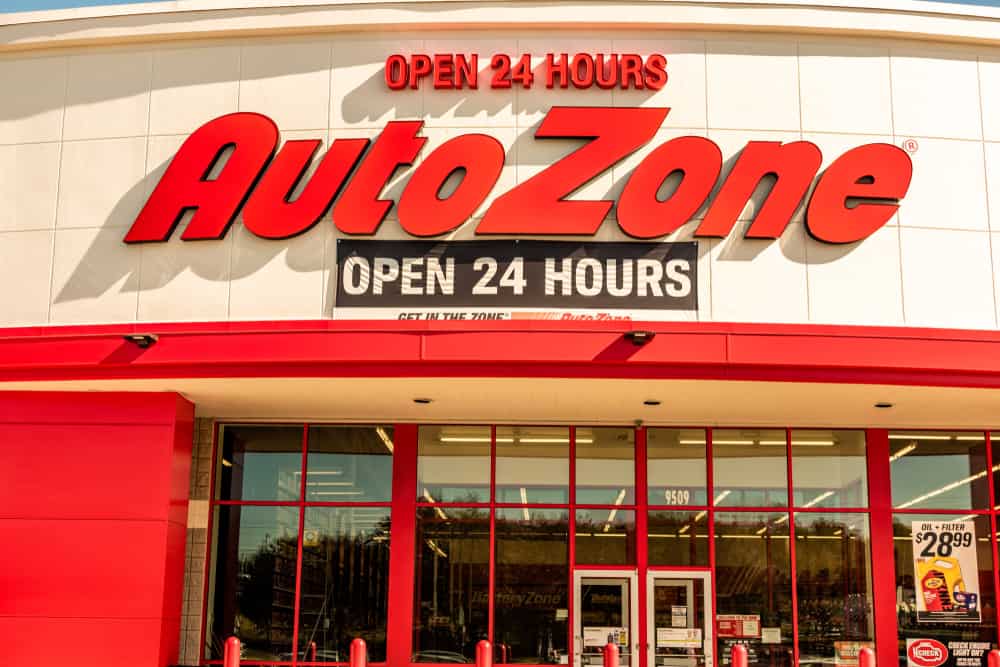 They suggest contacting your city or county for proper disposal methods for other fluids.

To recycle old car batteries, remove the battery from the car by disconnecting the negative battery cable and then the positive cable.

Make sure it isn’t cracked or leaking before placing it on a corrosion-resistant surface, like a rubber mat.

Then, just take it to an AutoZone where an associate will either refund your core deposit or issue you a $10 gift card as part of their “It Pays to Recycle” program.

If you take the battery back to the original location where you purchased it, you’ll get your core deposit refunded as an incentive to recycle your old battery.

AutoZone recycles steel and old car parts by sorting the parts and refining them.

Car parts, like engines, transmissions, alternators, and brake calipers, are remanufactured as new car parts and other products.

AutoZone uses some recycled pallets as shipping materials or by breaking them down into products like wood mulch, animal bedding, and wood heating materials.

Cardboard boxes and packing materials are used in other paper products.

As part of their plastic recycling program, AutoZone recently recycled over 1,000 tons of plastic, preventing microplastics from contaminating our rivers, lakes, and oceans.

What Are The Benefits Of At-Home Oil Changes? 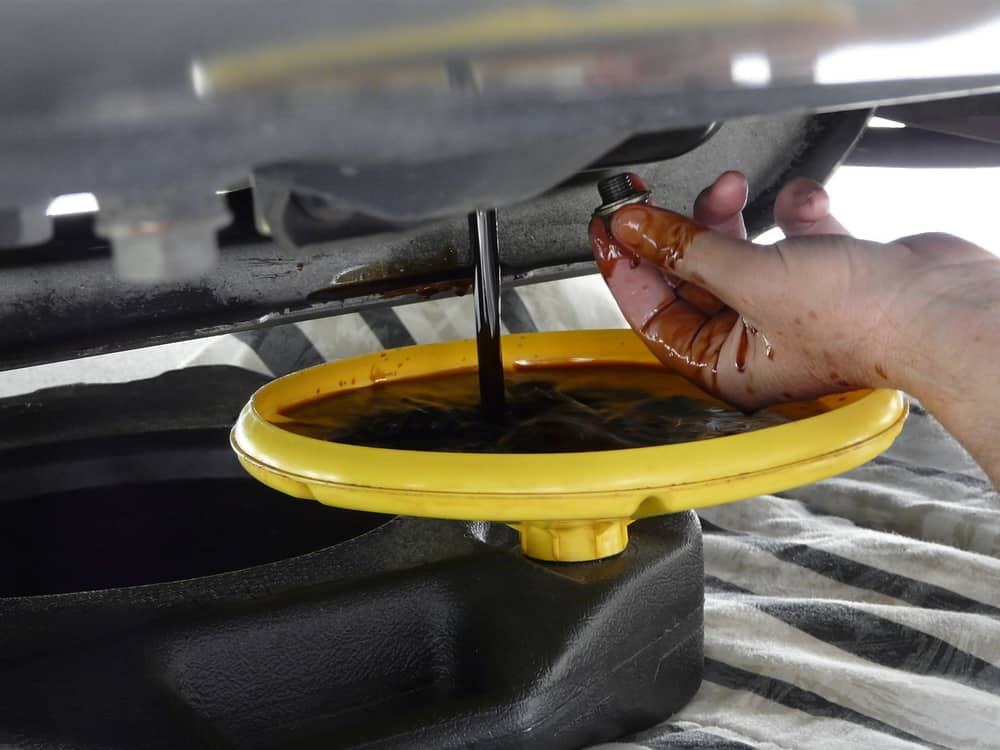 There are several advantages to changing your oil at home.

An oil change is a relatively simple process to learn and easy to do.

Many first-time car maintenance enthusiasts learn DIY oil changes as their first step in learning more about their vehicle.

Being able to change your own oil is an extremely useful skill to have, as it can save you time and money that add up through the years.

You can easily remove the hassle of making an appointment for an oil change and waiting for a couple of hours while it gets done.

As the price of oil and labor goes up, you’ll save even more money, especially by cutting down on excessive labor fees.

You’re also free to choose the brand or quality of oil you want and need.

Some service centers try to upsell you on oil you don’t need or may even put the wrong kind of oil into your car, causing your car to fail at working at optimum capacity.

When you perform your own oil changes, you know exactly what you’re getting, without the stress of having to put your trust in unreliable service centers.

Besides AutoZone, many other auto parts stores and service centers also accept used oil for free.

In addition to used motor oil, O’Reilly, Firestone, and some other auto parts stores will recycle other motor fluids, like transmission fluid, gear oil, hydraulic oil, and power steering fluid.

Check with the specific location you plan on recycling additional fluids to ensure their acceptance.

Pam Miller graduated from Southern New Hampshire University with an MA in English and Creative Writing and a concentration in Creative Non-Fiction. After working in the film and television industry for over fourteen years, she now devotes herself entirely to writing. She currently lives in Atlanta, GA with her dog, Billie Pilgrim