You are here: Home / Cold Hard Facts / Can Mice See In The Dark? (Explained) 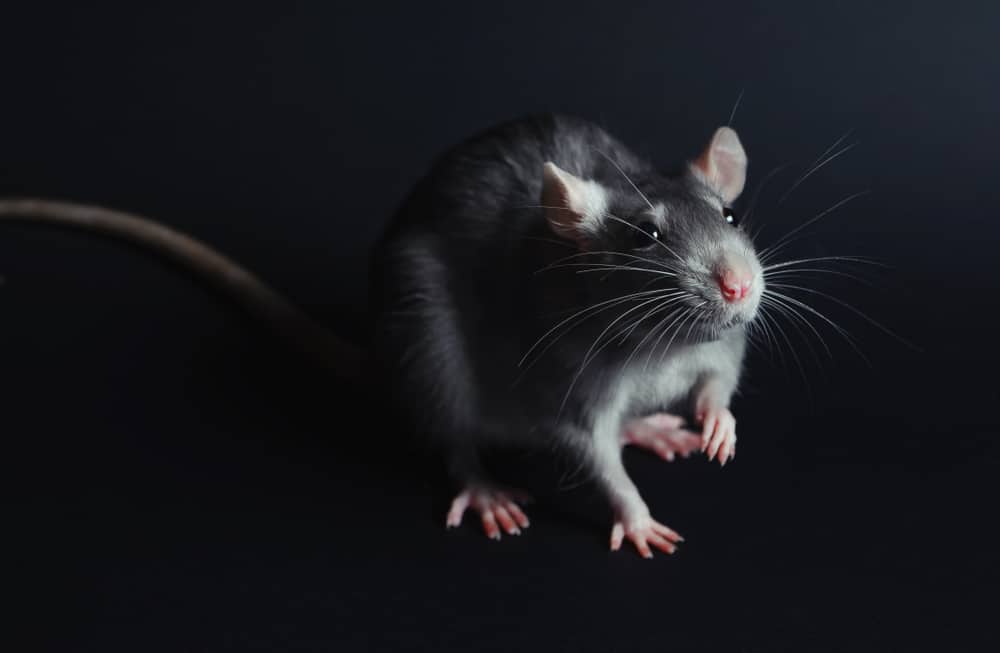 Considering that mice are nocturnal, you may wonder if they’re able to see at night.

With all the scuttling you hear, you may wonder if it’s because mice can’t see at night and are struggling to get around.

However, since they tend to scatter as soon as you turn on the light, you might also think that maybe they can see at night.

Here’s what you need to know about whether mice can see at night or not.

Can Mice See In The Dark? 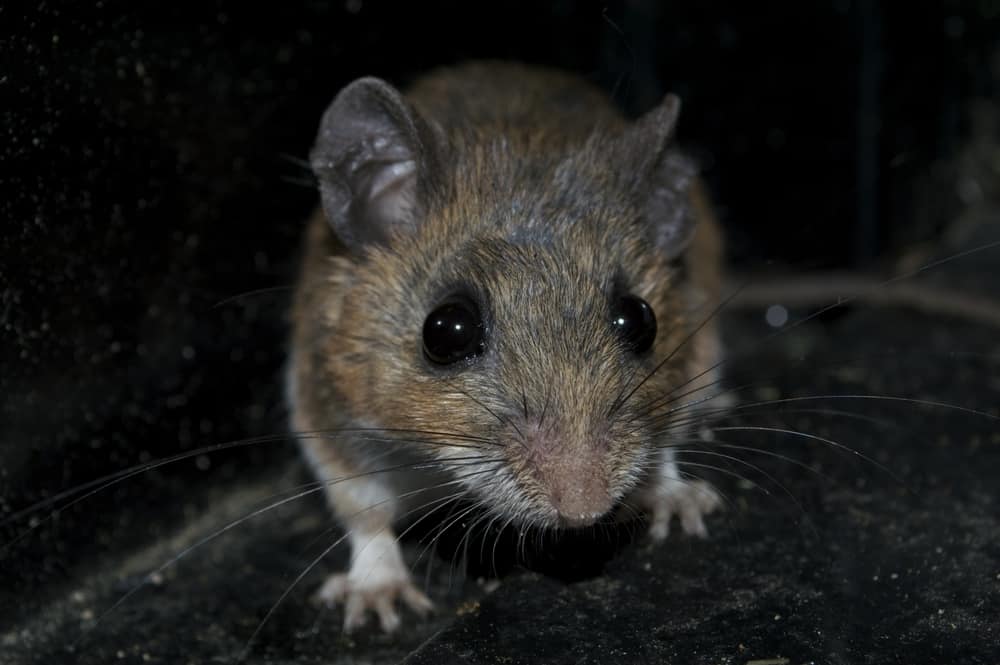 Yes, mice can see in the dark, but not very well.

According to one study, mice have poor vision overall.

It’s difficult for them to see objects that are close to them.

At night, their ability to distinguish objects from their backgrounds is even more impaired.

As such, while mice can sort of see in the dark, their vision isn’t as good as that of cats or other nocturnal creatures.

Instead, mice rely on other sensory cues to tell them about their environment.

How Do Mice Detect Their Environment? 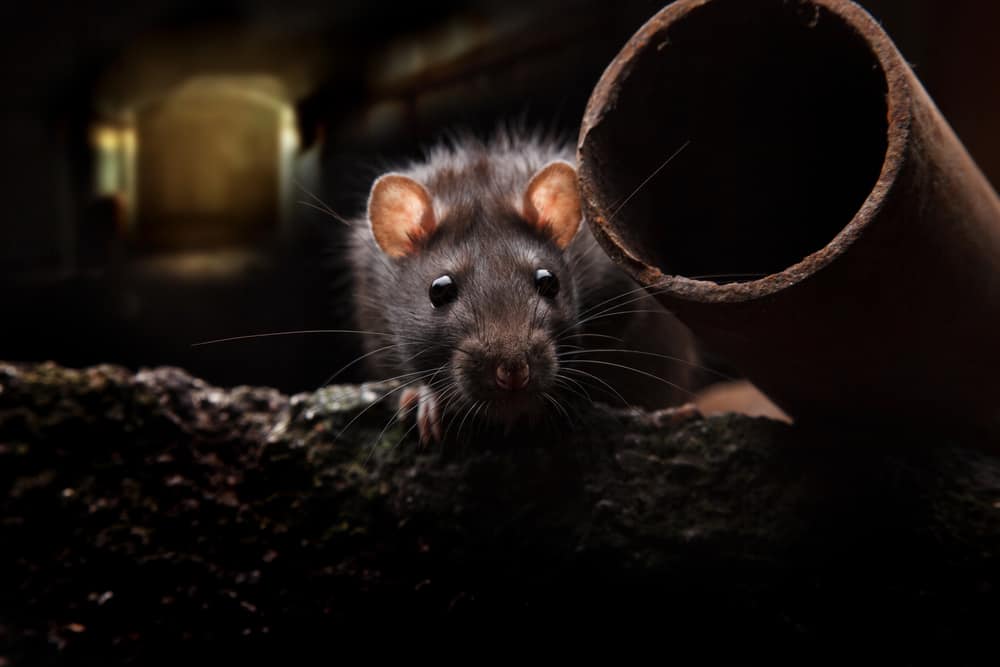 Since mice don’t have great vision, they use other parts of their bodies and other senses to stay informed about the environment around them.

Here are a few ways that mice can detect the environment around them. 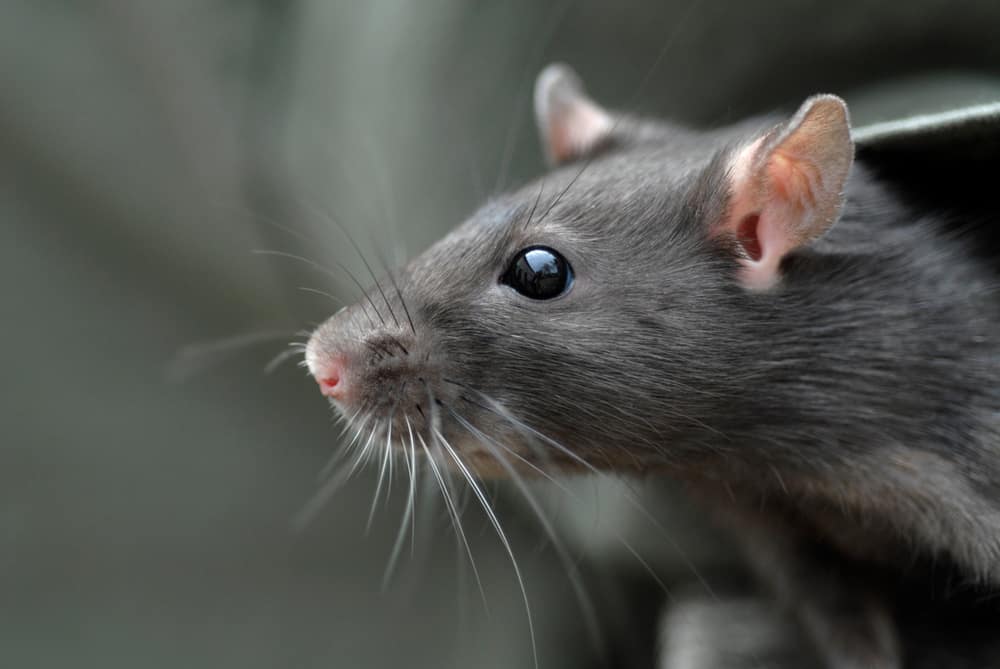 One of the most common ways that mice detect the world around them is with their whiskers.

Mice have a dozen whiskers on each side of their face for a total of 24 whiskers.

Each of these whiskers is capable of sending the mouse information.

When it touches something, the mouse can determine, to a degree, what it is that it’s touching.

Mice can even move their whiskers around to get a better feel of the object.

It’s almost as if they were holding their hands out and using them to guide themselves around objects.

If you see a mouse flexing its whiskers, then it’s probably trying to detect the world around it. 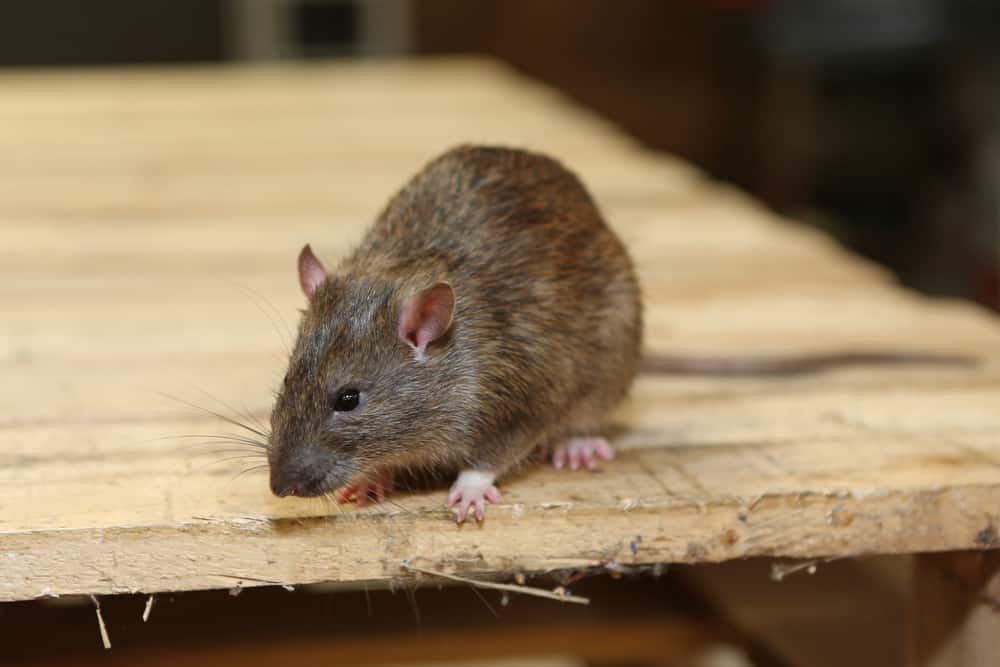 Mice have big ears for a reason.

Their big ears allow them to hear pitches as high as 91,000 Hertz.

For comparison, humans can hear pitches as high as 23,000 Hertz.

That said, mice do have problems hearing low pitches.

They tend to be unable to hear anything below 1,000 Hertz.

Humans, on the other hand, can hear pitches as low as 64 Hertz.

Because mice are often able to hear high-pitched noises, they use those pitches to communicate with one another.

You may have mice communicating with one another, and you may not even hear it.

That said, a mouse’s hearing isn’t too strong.

The quietest sound that they can detect is around 30 decibels.

To put that into perspective, the average sound level of a whisper is around 40 decibels.

Mice also have a difficult time hearing sounds through walls and other objects.

Unless the noise is extremely loud, a wall can interfere with their ability to hear accurately.

Finally, also like humans, a mouse’s ability to hear diminishes with age.

That said, mice do use their ears to listen to map the environment around them.

They’ll be listening to their fellow mice as well as listening for predators.

The soft paws of a cat, for example, are something they’ll be listening for.

While mice don’t have the strongest sense of hearing, they do use it to determine their surroundings. 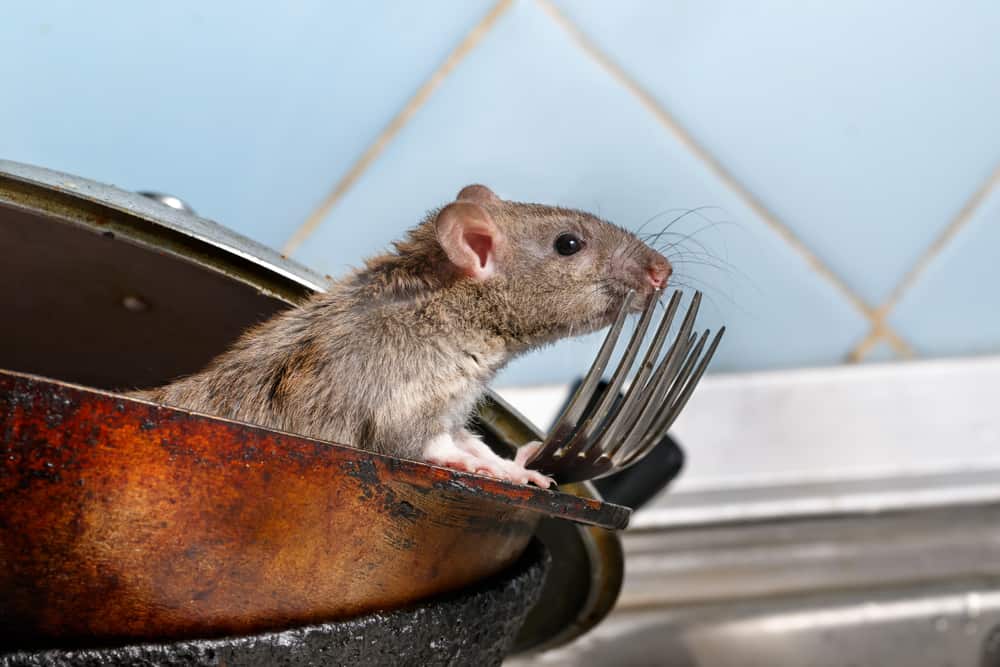 Perhaps the most powerful sense that a mouse has is its sense of smell.

Mice can detect the scent of another mouse within 10 miles.

They can even determine the other mouse’s sex and age.

Mice use their sense of smell to communicate with other mice.

They also use it as a means of direction.

Since mice leave a trail of oil where they walk, they can follow the smell of that oil back to their nests.

Mice also use their sense of smell to determine if there are any predators around.

They can smell cats, humans, and other scents that can make them aware of certain dangers around.

If the smell becomes strong, then the mice know that the predator is coming closer.

Mice also use their sense of smell to find food.

They can smell it at a pretty great distance which allows them to track down food easily.

That’s also one of the reasons you might have mice in your house.

If you tend to leave the garbage out inside of your home, then you’re potentially attracting mice to your home.

A mouse’s sense of smell is one of its primary methods of detecting the environment around it.

How To Prevent Mice From Getting Into Your Home 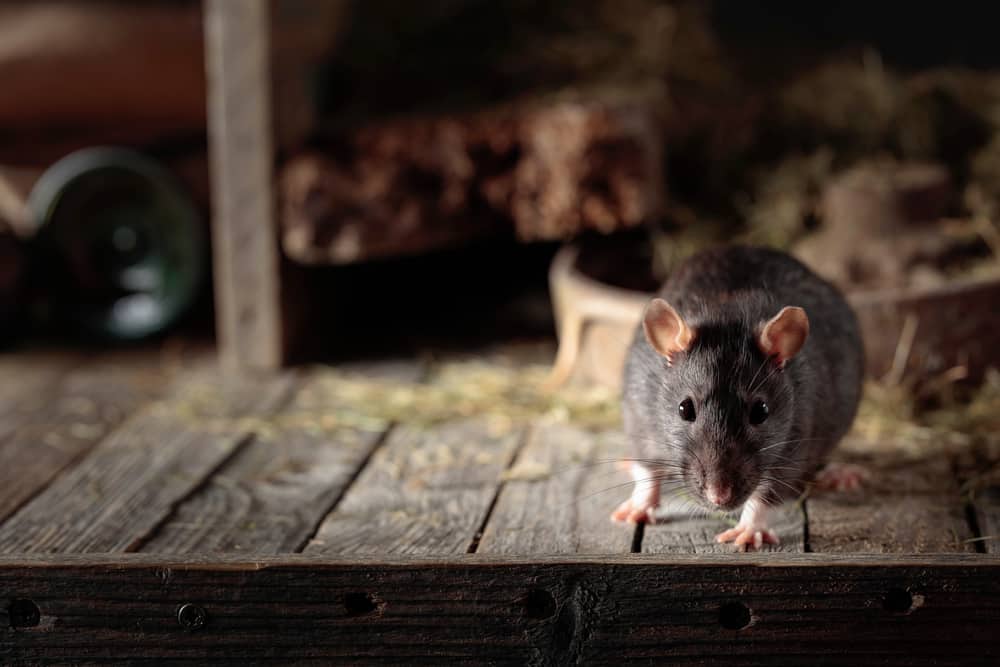 Knowing which senses the mouse prefers to use can help you come up with a great prevention plan.

By understanding how a mouse perceives the world around it, you can ensure that your home doesn’t blip on its radar as a potential source of food and safety.

Here are a few ways you can prevent mice from getting into your home.

1. Take Out The Trash 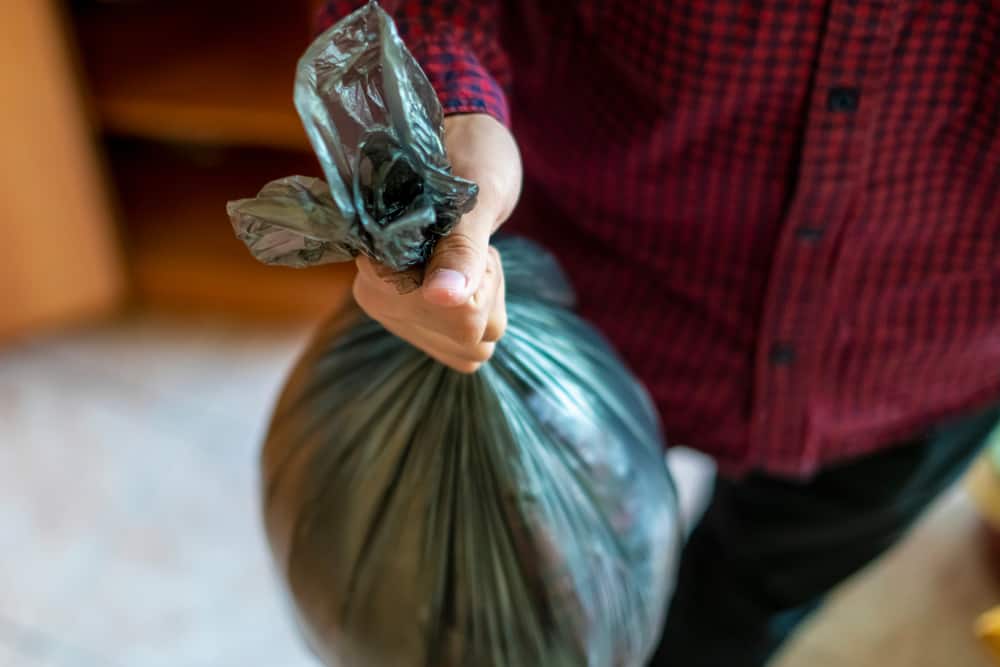 One of the best ways that you can prevent a mouse from entering your house is to ensure your house isn’t interesting to it.

Even if you have your trash bag out on the porch, deck, or by the door, you’re basically inviting a mouse to your yard.

If this is something you do habitually, then the mouse can rely on you as a frequent source of food.

Eventually, the mouse might enter your home to get to the food directly.

You need to keep a mouse’s powerful sense of smell in mind when you want to keep them out of your house.

Make it a habit to put your full trash bags into the bin regularly.

It’s also important to keep the bin at a good distance from the home.

If the mice are going to congregate anywhere, it’s better in your trash bin than in your home.

By putting your trash in the bin, you can prevent mice from entering your home. 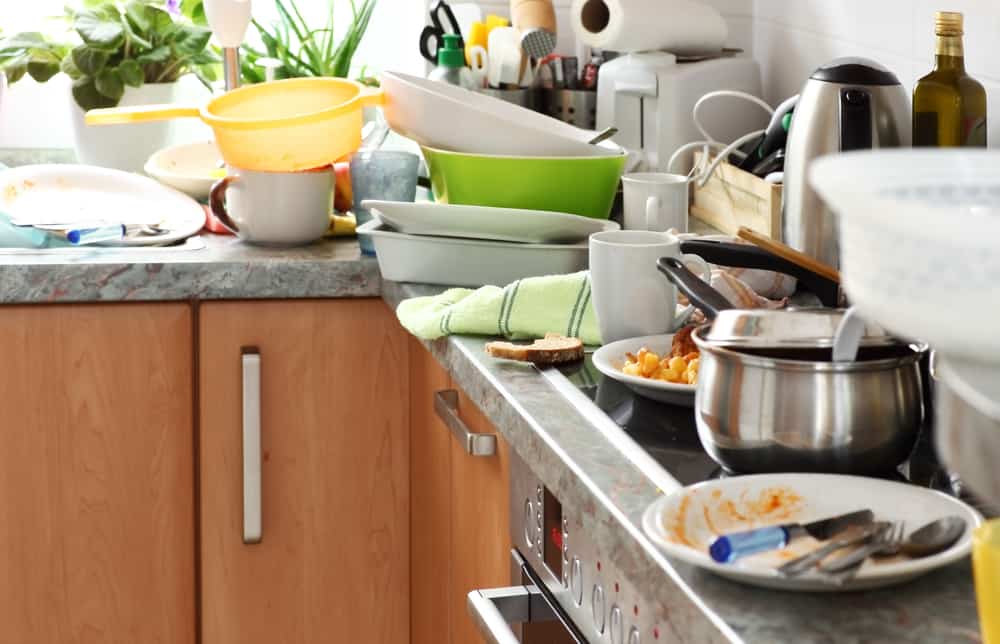 Another way to prevent mice from entering your home is if your room is dirty.

That includes both clutter and dirt.

A dirty home is attractive to a mouse because it means two things.

First, it suggests that the house is empty.

Most people tend to keep their houses relatively clean.

A dirty home suggests that there are either not that many people in it or that the people who live there aren’t home that often.

That tells the mouse that it might be a safe place to build a nest.

It also tells the mouse that are plenty of materials available to use to build its nest.

If they detect food as well, then your home is a beacon to them.

To keep mice from choosing your home to build a nest in, you’ll want to do a deep clean.

You’ll need to get rid of the clutter and do a pretty decent job of sweeping, dusting, and sanitizing the place.

Once your home smells lived in to them, they’ll have a little less interest in it.

That’s because they prefer to build in areas that seem abandoned to them or in areas close to food sources.

3. Get Rid Of Vegetation Around The House 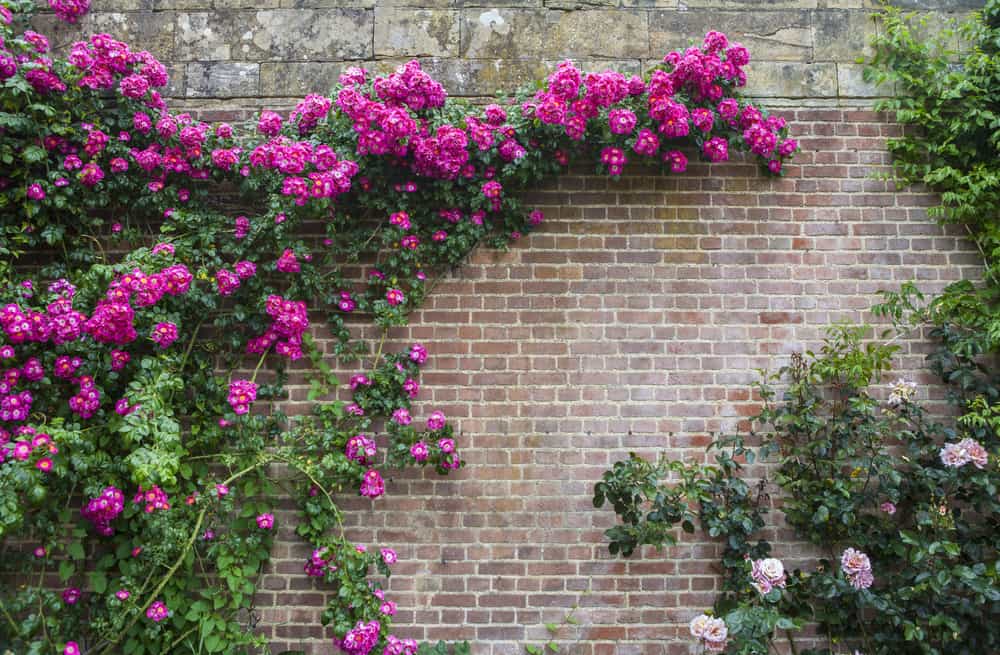 Another thing to keep clear of your home is vegetation.

In particular, you want to get rid of vegetation that allows mice to climb into your home.

They can even climb vertical walls.

Because of that, you don’t want to offer them any more help by having climbable vegetation around your home.

Mice can climb ivy and other sorts of climbing plants to get access to vents and other places.

If a mouse smells food in your home, then it can use the vegetation to get inside.

Clearing the house of vegetation ensures that mice have a bit more difficulty in getting into your home. 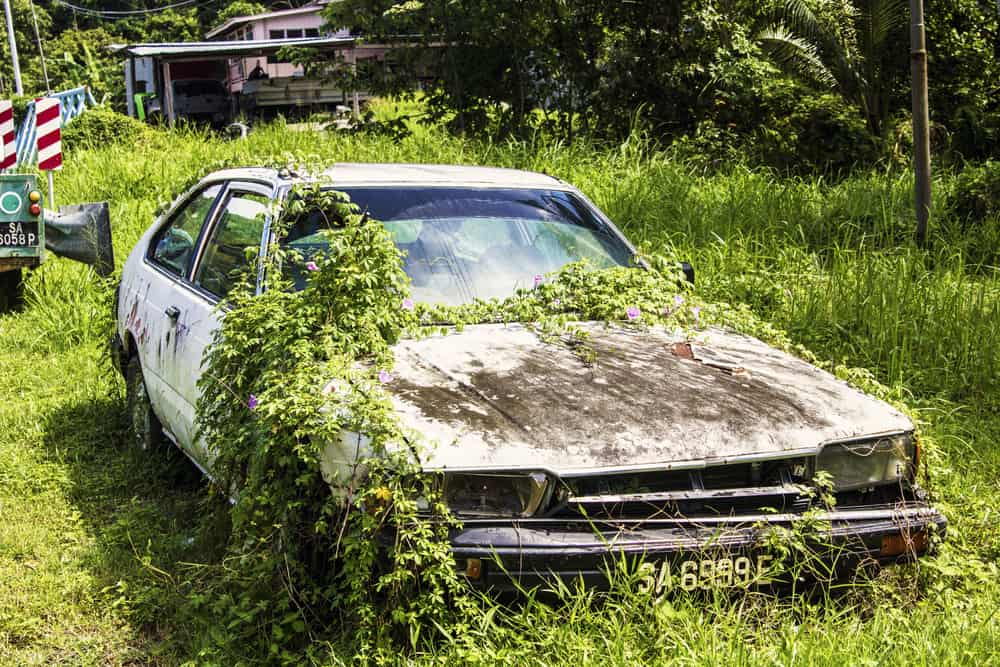 To keep mice from getting into your home, you’ll want to make sure that they don’t have a place to live nearby.

There’s no shortage of ways to get inside the car.

Since it’s abandoned, the mice typically don’t have to worry about predators either.

The problem with mice setting up shop in an abandoned car is that it allows them to be within close proximity of your home.

Since they’re close, they’re able to easily get in and out of your house for food.

Mice might not build a nest in your home if the car is relatively close by.

Instead, they might just find a way into your home, get food, and then escape back to the car.

You can keep mice out of your home by removing any abandoned cars that you have in your yard. 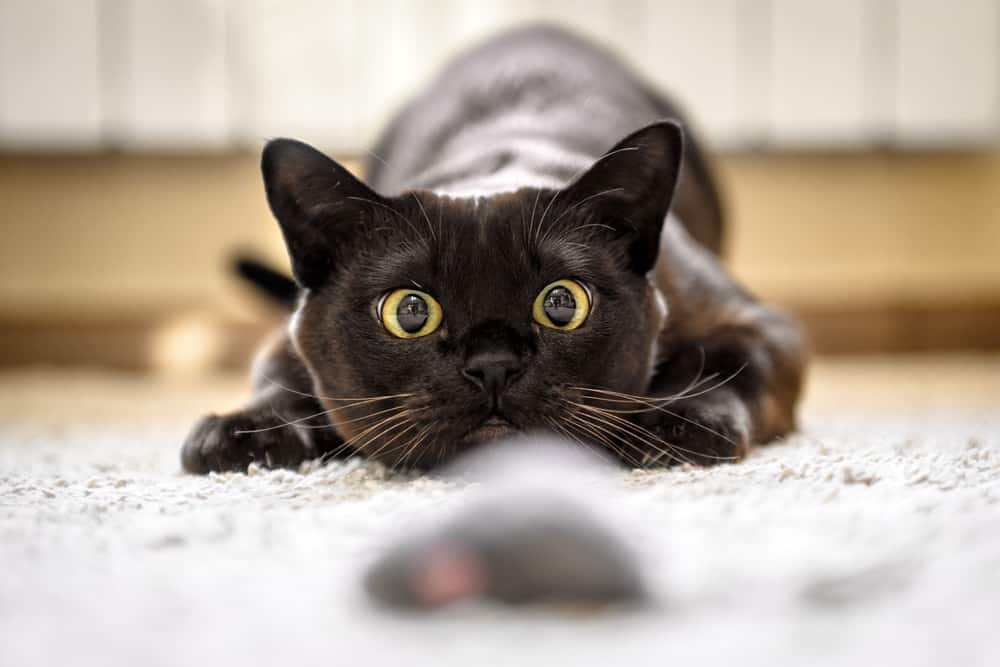 If you want to add a pet to your family, then you should consider getting a cat.

Cats are great for mice prevention because cats hunt mice.

While it’s ideal to let your cat roam your yard to hunt down mice that might be trying to get inside, you can have a cat that just stays indoors, too.

Since cats are nocturnal as well, they tend to be more active at night.

They’re more likely than dogs to catch a mouse when it comes out of its hole.

The scent of a cat can also work as a great preventative measure.

If mice smell that there’s an active cat in your home, then it becomes a risky place for them to find food.

Some may still attempt to get food in your home, but your cat can scare them off or kill them.

In many cases, the strong smell of a predator will make mice choose a different place to build their nests. 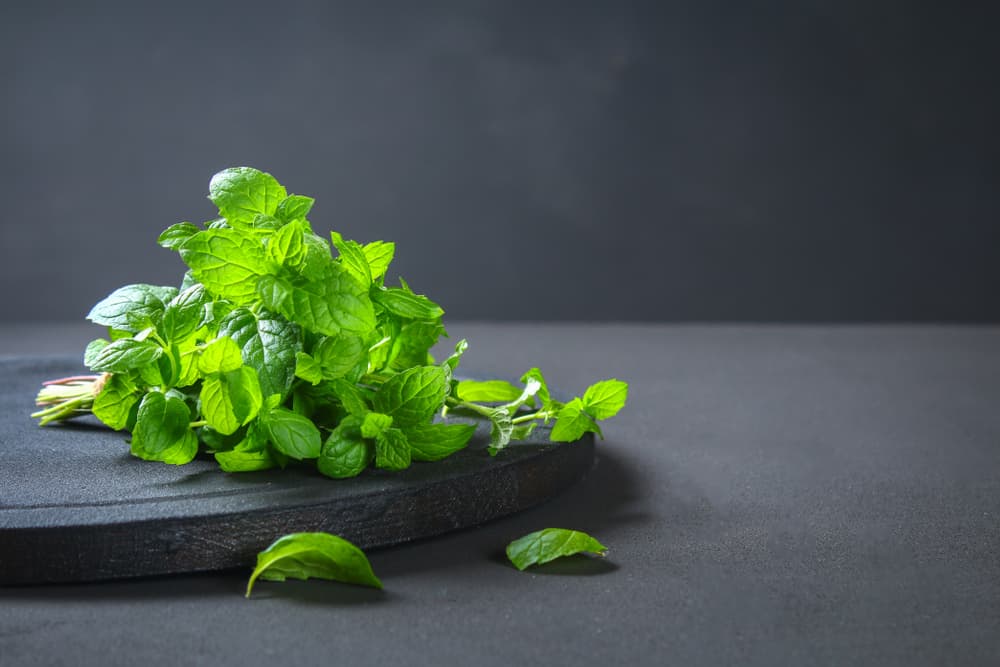 If you want to deter mice from entering your home, then you might want to try spraying peppermint oil in certain areas.

Peppermint oil isn’t the most effective means of preventing mice infestations, but it can help.

The reason mice don’t like peppermint is that it has a very strong odor.

That can make it difficult for them to smell other odors like predators and food.

It’s also unpleasant for a creature that has an incredibly strong sense of smell.

The problem with peppermint oil is that the odor fades with time.

To ensure it remains strong enough to keep mice from entering your home, you need to do a few things.

The first is to plant peppermint.

If you can plant peppermint and place those plants in areas that mice might try to use to get inside, then you can ward them off.

Plants won’t give off a very strong scent of peppermint, since it isn’t concentrated, but it can give a persistent scent.

Another thing you can do is soak some cotton balls in peppermint oil.

The scent of peppermint lasts a bit longer on cotton balls because it evaporates a lot slower.

Finally, you’ll want to spray areas of your home with peppermint oil frequently.

By making your house smell strongly of peppermint, you can discourage mice from settling inside of it.

Mice are nocturnal creatures, but despite that, they don’t have the best vision overall.

They’re nearsighted and have difficulty distinguishing between different objects at a distance.

They rely on their other senses instead.

You can use this knowledge to try the methods listed above to keep your house free of mice. 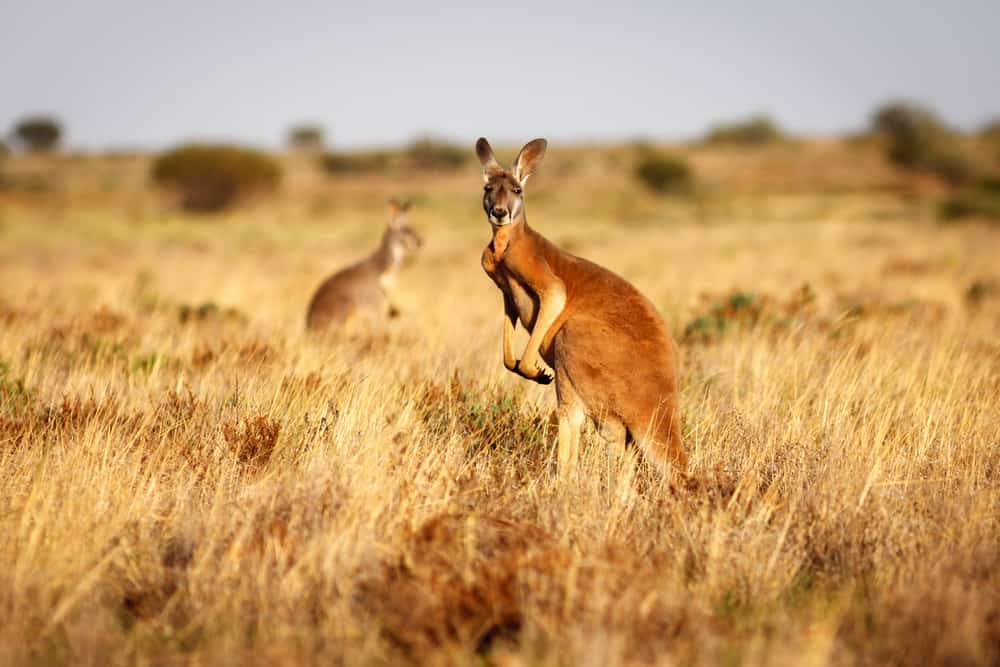 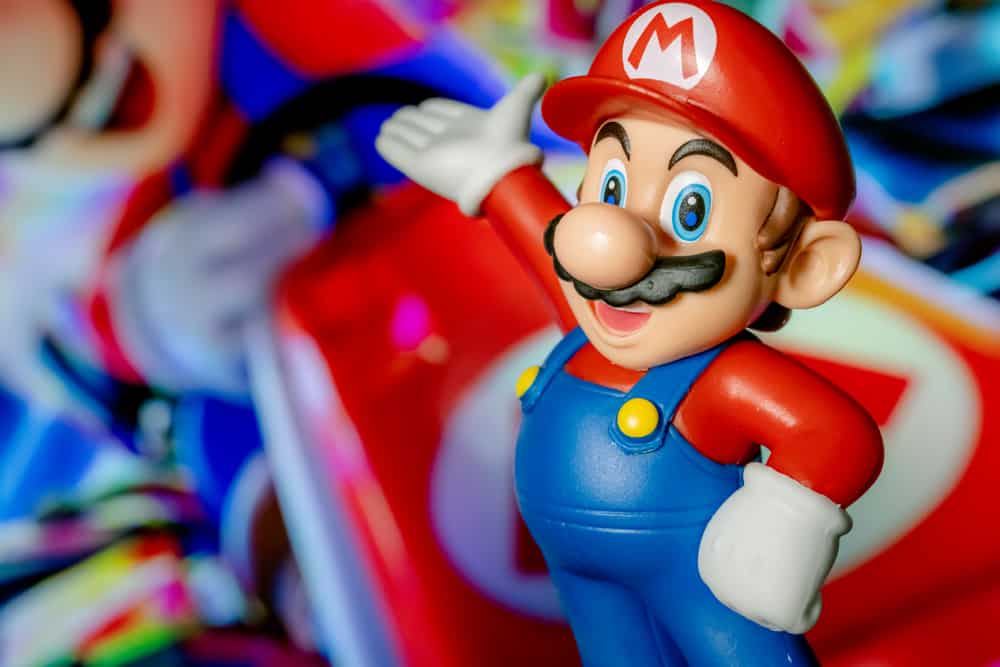 How Tall Is Mario? (His Real Height) 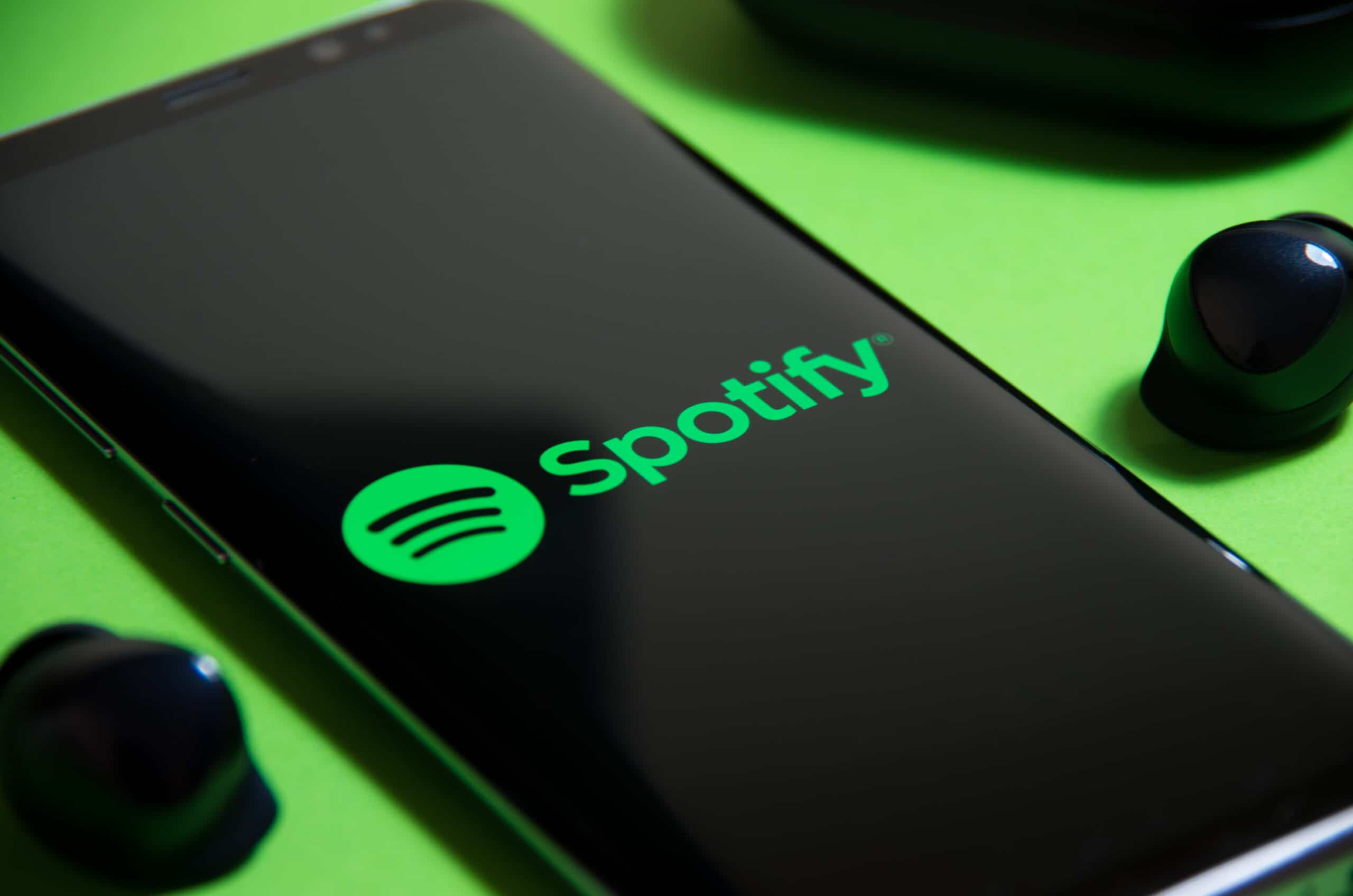 Is Spotify Premium Worth It? (10 Reasons It Is)

Can Mice See In The Dark? (Explained)