You are here: Home / Sports / MLB / What Happened To Johnny Damon? (Complete Story)

Former Boston Red Sox and New York Yankees outfielder Johnny Damon was one of the few players to balance both sides of the rivalry.

In fact, he won over the hearts of the fans with both franchises.

For his 18-year career, he was a consistent contributor in the outfield.

He was a classic style of hitter, being a speedy guy out of the left-side of the batter’s box.

He becomes the first Yankee to record 6 hits at Yankee Stadium.pic.twitter.com/wjOb73omnC

His gritty style of play was infectious, and he inspired the teams he was part of.

On many of these teams, he developed himself into their heart and soul.

Here is a look at Damon’s career story and his journey to becoming a two-time World Series champion.

Damon was the first round selection of the Kansas City Royals in 1992, making his debut with the club in 1995.

While he quickly became the team’s starting centerfielder, it took a few years until he stepped up his production.

This started a string of successful seasons that continued up until his retirement.

In 2000, his final season with the Royals, Damon dominated.

He led the MLB in runs scored with 136 and stolen bases with 46.

This solidified his spot as one of the better centerfielders in the league.

Prior to the 2001 season, he was traded from the Royals to the Oakland Athletics, where he is most known for his references in the book and movie Moneyball.

However, he didn’t have a great season with the Athletics as his numbers took a step back.

Regardless of that, he commanded a large contract that offseason as he signed a four-year, $31 million contract with the Red Sox.

Damon With The Red Sox

While he put together solid years during his first two seasons with the team, his role took another step forward in 2004.

Donning the “caveman” look, Damon was the heart of a scrappy Red Sox team.

This was all as the team embarked on a run to the World Series, defeating the Yankees after being down 3-0 in their series.

In Game 7 of that Yankees series, Damon hit two home runs and had six RBI.

However, during that offseason, Damon decided to sign a contract with the Red Sox archrivals. 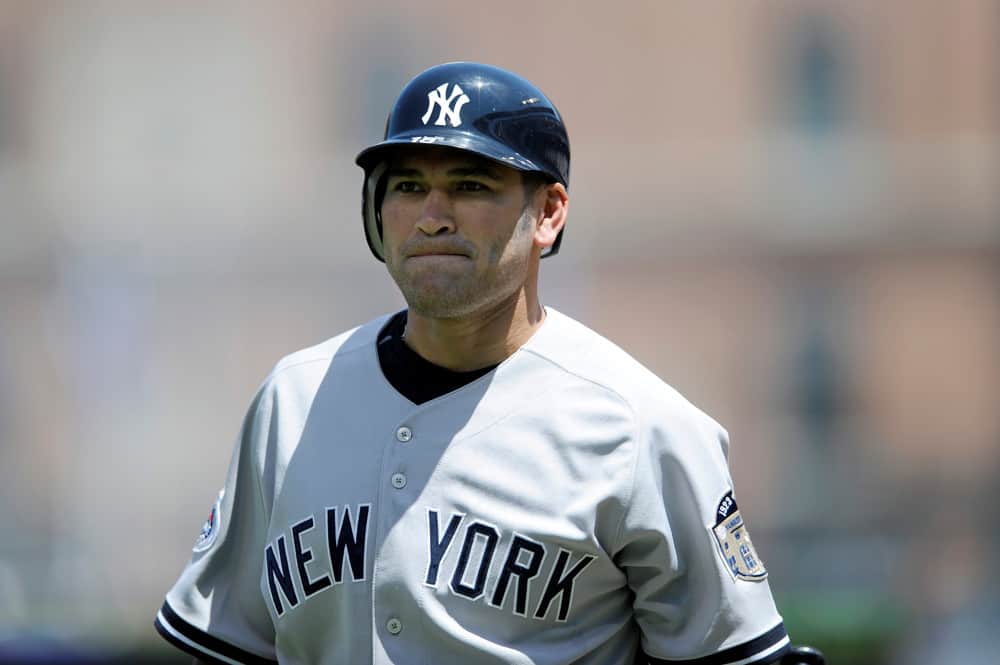 In December of 2005, he signed a four-year, $52 million contract with the Yankees.

For many, he was instantly labeled as a traitor who only cared about the money.

It was one thing for him to leave the team but going to their dreaded rivals was off limits.

Regardless of this, Damon stepped onto the Yankees and continued the production he became known for throughout his career.

In his first season with the team, he slugged a career high of 24 home runs and hit .285.

However, he is most known for his time in the Bronx because of his role on the 2009 team.

Yet again, he found himself as a core piece of a World Series contending team.

He stepped up even further in the ALCS and World Series, hitting at least .300 in each series.

His heads up base-running during the ninth inning of Game 4 against the Phillies particularly stands out for Yankees fans.

This eventually led to Damon hoisting the second World Series trophy of his career, giving fans of both the Yankees and Red Sox another trophy.

After 2009, he left the Yankees and bounced between three different teams before he retired.

These were very good numbers that approach a Hall of Fame conversation.

He put together a solid, 18-year career where he was consistently good.

In his post career life, he has appeared on a variety of reality TV shows such as Dancing With The Stars.


While he likely won’t ever make it to Cooperstown, he still holds a special place for fans of the Red Sox and Yankees’ franchise.
Get ALL the latest MLB news straight to your inbox! Subscribe to the Cold Wire MLB newsletter here!