You are here: Home / Sports / MLB / Boston Red Sox Rumors And News (Updated Daily) / Should Curt Schilling Be In The Hall Of Fame? (Breakdown) 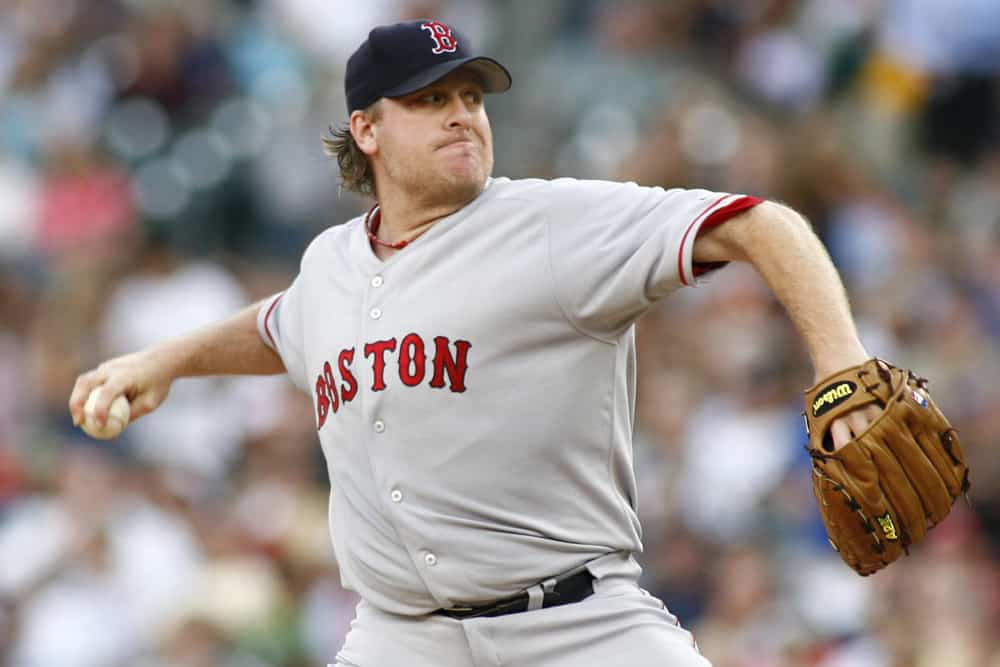 During a time of boosted offense, former Boston Red Sox pitcher Curt Schilling was one of the best pitchers of the generation.

He put up solid numbers over a 20-year career, across five different teams.

Over this time, he also collected a reputation of being a clutch postseason performer.

This included three World Series championships, one of which he was the MVP for.

In the 2020 voting, Schilling inched even closer to being elected.

Curt Schilling finishes just shy of the 75% requirement to get elected into the Baseball Hall of Fame.

Is next year Curt's year? pic.twitter.com/qb7tNow3Lf

Now, he enters his 10th and final year on the ballot with just a small percentage of votes to make it to Cooperstown.

When looking at the statistics, it would be hard to argue against his induction.

However, the debate around Schilling’s election to the Hall of Fame has become one of morality.

Here, we will look at his career by the stats, along with what may be holding his case back.

Though he debuted in 1988, Schilling didn’t establish himself as an MLB starting pitcher until 1992.

While he proved his potential as a starter, he still wasn’t able to solidify his position among the league’s best.

He struggled over the next four seasons, being limited in his total starts.

He pitched particularly well in 1997 and 1998, leading the league in games started and strikeouts each season.

During the 2000 season, he was traded to the Arizona Diamondbacks.

Here, he solidified his spot as one of the league’s best pitchers as he helped lead the franchise to a World Series appearance in 2001.

17 years ago today, the #Dbacks turned to Curt Schilling in a pivotal Game 3 of the 2001 NLCS. His final line that night in Atlanta?

Facing the New York Yankees who won four of the previous five championships, Schilling posted a 1.69 ERA in 21.1 innings.

This included a standout performance in Game 7.

Schilling finished his career wither a few more dominant seasons, before retiring with the Red Sox.

In the playoffs, Schilling was even better.

Schilling is notably known for pitching through pain with a bloody sock in an epic Game 6 of the ALCS while with the Red Sox.

This is a Hall of Fame resumé.

In recent years, Schilling has not helped his case.

He has taken to social media with hateful and dangerous rhetoric, particularly through his political beliefs.

He also tweeted a shirt that advocated for the hanging of journalists.

His actions have hurt his Hall of Fame voting in the past, especially after he interviewed noted white nationalist Paul Nehlen.

During the interview, he appeared to agree with Nehlen’s opinions which caused a dip in his voting percentage.

However, that was short-lived.

His voting totals began to go back up after 2017, reaching the point they’re at today as voters appeared to forget about Schilling’s off-field drama.

Now, with a weak incoming player class, the likelihood that Schilling makes it in is high.

The Verdict: Should Schilling Be In The HOF?

If I had a vote, Schilling would not get in.

While Cooperstown is certainly meant to represent a player’s performance on the field, their character is equally as important.

Many of Schilling’s voters suggest that since past HOF inductees were bad characters, then he deserves a vote too.

However, it is time to start shifting this narrative.

So far, he has a net loss of one vote in ballots released to the public.

If he does get voted in this time around, there will be a lot of discussion into his past.

They will not be very good discussions either.

His vote will also set a precedent for players in the future, especially someone like Omar Vizquel who has been tied to domestic abuse allegations.

If Schilling gets in, the player’s character can largely be ignored.

However, for me, it plays a large role.

Because of this, though Schilling put together a Hall of Fame career, his immoral character hurts his case severely.

The Red Sox Are Breaking A Tired MLB Narrative

Red Sox Were Reportedly Way Off In The Bogaerts Sweepstakes

The Red Sox Have Already Fixed A Major Offseason Concern

The Red Sox Make A Splash At Closer

The Red Sox Continue To Be Outbid In Free Agency

Red Sox Analyst Sums Up Why Fans Are So Mad

Should Curt Schilling Be In The Hall Of Fame? (Breakdown)