You are here: Home / Sports / MLB / Should Bernie Williams Be In The Hall Of Fame? (Breakdown) 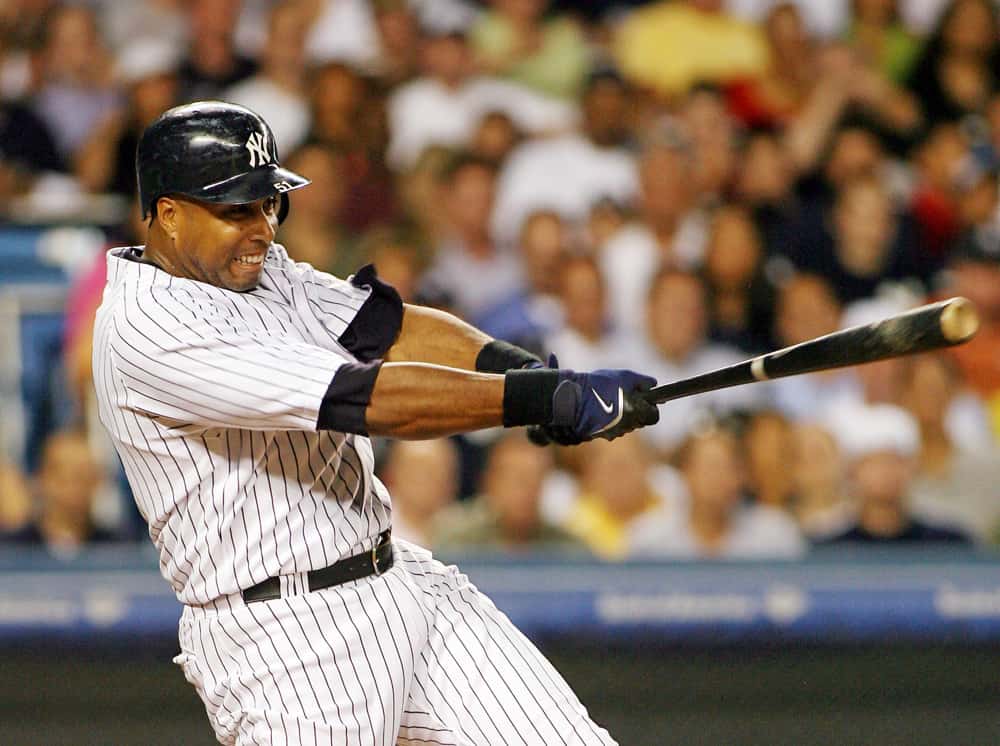 During the New York Yankees dynasty of the late 1990s/early 2000s, Bernie Williams was the team’s best hitter.

The centerfielder has been under-appreciated and overshadowed by other players on those Yankee teams.

However, without him, the dynasty may not have been as successful.

He was an adept switch hitter who, in the middle of the Yankees lineup, was a constant source of production from one of the most high-profile positions in the sport.

Now, looking back on a historic and storied career, should Williams have a spot in the Hall of Fame?

In 2013, with a stacked Hall of Fame ballot, he failed to receive 5% of the votes and fell of the voting.

That hasn’t stopped the debate around his career though.

Here we will breakdown Williams’ career, seeing if he has a legitimate case to make it into Cooperstown.

When Williams became the Yankees’ starting centerfielder in 1993, he never looked back.

This sparked a 16-year career that made him a beloved centerpiece in the Bronx.

As the Yankees began to become relevant again in the playoff picture during the 1994 lockout season, Williams blossomed into a great hitter.

In 1995, the franchise made their first playoff appearance since 1982.

Starting in that season, Williams put together eight straight seasons with a .300-plus average.

He also added 20 home runs in six of those eight years.

While the metrics don’t necessarily support him, he won four straight Gold Glove awards from 1997-2000.

It is hard to understand just how critical he was to the success of the Yankees during this period.

Has there ever been a more underappreciated Yankee or player in MLB than Bernie Williams? The dude absolutely raked during his prime and was the Yankees best hitter during their run in the 90s.

Let's appreciate a HR that started a dynasty.pic.twitter.com/T6ROHds857

He was a switch-hitter who was a call-back to an older style of hitting, fitting right into the Yankees’ adopted personality of the time.

With the success of Williams, the young stars of Derek Jeter and Jorge Posada were able to slide into a lineup and thrive.

By the time his career came to an end, he put together a 16-year career and carved a spot in the hearts of Yankees fans everywhere.

He also had a solid postseason career, playing in 121 total games.

All together, these are very good career statistics.

However, are they good enough to warrant saving a spot in the Hall of Fame for Williams?

Does Williams Deserve A HOF Spot?

For this argument, many traditionalists in the sport don’t believe Williams belongs in the Hall of Fame.

Is Bernie Williams a Hall of Famer? Was he the best offensive player on the '90s Yankees?@MadDogUnleashed & @MrBrianKenny make their cases on #HighHeat! pic.twitter.com/7d1iAA3Cw6

While his career statistics are very good, they aren’t quite at that next level.

Based on the JAWS statistics, which measures an average of a player’s total wins above replacement (WAR) and his peak WAR, Williams ranks lowly.

Among all centerfielders, Williams is 25th all-time.

He is behind 12 non-Hall of Famers on his list too.

Because of this, you can argue that Williams just belongs in the “Hall of Very Good.”

However, you can make an interesting case for him.

In a time where steroids dominated the sport of baseball, Williams remained clean.

He did so while playing in the most difficult market in the world, being under the critical eye of New Yorkers each day.

Even with this, he won the hearts of each fan in the city all while being the best hitter on the team in this time.

He is a four-time champion and helped lead the team to these, something that must be considered.

There may ultimately be a spot for Williams in Cooperstown.

While he has some retractors based on traditional stats, Williams left a mark on the sport.

He did so while putting together a solid 16-year career that has some HOF merit.

In some time, he could certainly become an Era’s Committee selection and it would ultimately be deserving.

However, regardless of this, Williams remains an icon for Yankees baseball and the organization’s great dynasty.

Should Bernie Williams Be In The Hall Of Fame? (Breakdown)