You are here: Home / Sports / MLB / Should Andruw Jones Be In The Hall Of Fame? (Argument) 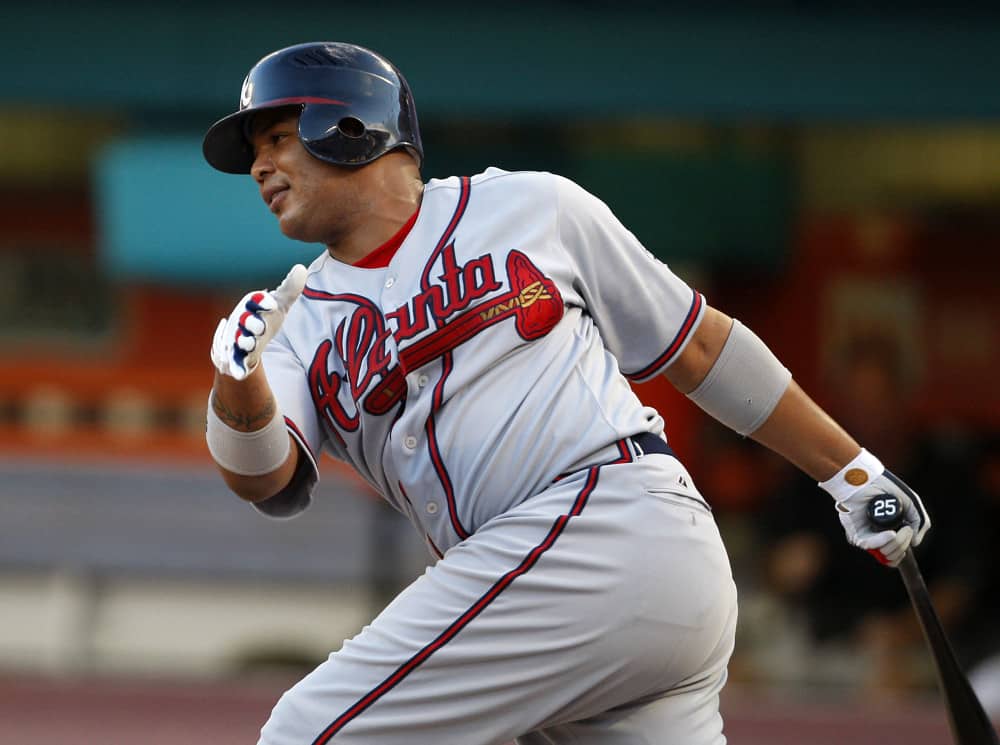 It was hard to talk about Major League Baseball in the 1990s without mentioning the Atlanta Braves.

Hall of Famers Tom Glavine, Greg Maddux, and John Smoltz dominated opposing hitters while Chipper Jones manned the hot corner and launched home runs from both sides of the plate.

There was also a young, up-and-coming star on those late 90s teams who would soon lose the “up-and-coming” label: center fielder Andruw Jones.

Jones offered a power bat behind the Hall of Fame third baseman as well as a glove in centerfield that consistently made out-of-this-world plays.

Unfortunately, baseball fans in the late 90s and early 2000s may not have appreciated this young kid from Curacao for what he was: a Hall of Fame worthy center fielder.

It is reserved only for those who were great.

At first glance, it is easy to think Andruw Jones is a borderline candidate.

When we think of Hall of Fame center fielders, we think of guys like Joe Dimaggio, Willie Mays, and Ken Griffey Jr.

Jones is simply not at that level.

But then we see guys on that list like Andre Dawson and Kirby Puckett, and we start to wonder if the gap between them is that big?

The answer is no, and the numbers support it.

Willie Mays holds the record for most times winning the award for outfielders with 12.

#TBT to when there was nothing Andruw Jones couldn’t catch. pic.twitter.com/KlfXoxgOSZ

Puckett only hit 207 although power was not a major part of his game.

The gold standard for Hall of Fame power hitters appears to be 500 career bombs.

Guys who don’t reach that number are given a pass for having another elite facet to their game.

Does Jones’s defensive ability not qualify as elite?

Here's a list of CF with more career homeruns than Andruw Jones.

Here's a list of CF with more gold gloves than Andruw Jones.

This stat category has long been considered the benchmark for assessing how valuable a player is.

Great players are the most valuable players on their teams.

In 1999, Chipper Jones won the National League MVP award and carried a WAR of 6.9.

Andruw Jones had a WAR of 7.1 that year. If Dawson and Puckett are valuable enough for Cooperstown, it is hard to see why Jones isn’t.

The only thing Omar Vizquel (42.5 fWAR, 262.1 Def) did better than Andruw Jones (67.0 fWAR, 278.8 Def) was play longer. Played 24 seasons and had exactly one more Gold Glove than Andruw, who was the hands down best defensive center fielder of all-time. https://t.co/fqdb4MvEn6

Like many guys who don’t get voted into the Hall of Fame on the first ballot, there are some aspects of Jones’s game that raise some question marks.

His career batting average of .254 leaves a lot to be desired.

The case could be made that it should be overlooked in Jones’s case as it was for Ozzie Smith and Reggie Jackson.

Both had career averages of .262 — well below the standard for Cooperstown.

Jones should be excused because of his defensive play. . . and his power helps his cause as well.

Knocking on the Door

If not for baseball legend Chipper Jones, whom many rank at or near the top of the list of greatest third basemen to ever play the game, Andruw Jones may have been the face of those late 90s early 2000s Braves teams.

As he walks up to the gate of Cooperstown, he brings with him one of the most unique power and defense combinations the game has ever seen.

He has been knocking on the door for years.

He is just waiting for 75% of the voters to let him in.

Braves Analyst Sums Up How The Front Office Won 2022

Braves Congratulate A Top Franchise Leader On His Latest Honor

The Braves Have Already Shut Down A Major Trade Rumor

Spencer Strider Had A Historically Elite Mark In 2022

Braves Fans Will Be Thrilled With Ownership's New Goal

2 Moves The Braves Should Make This Offseason

Braves Manager Comments On What Awaits In Philadelphia

Should Andruw Jones Be In The Hall Of Fame? (Argument)