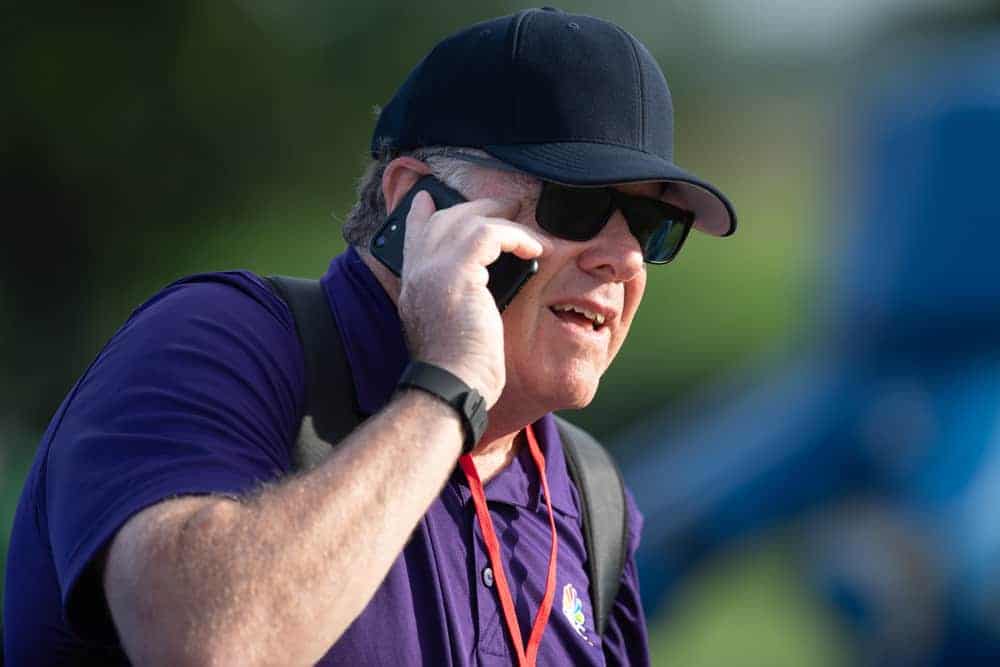 The New England Patriots currently sit at 2-5 and are staring down the barrel of a rebuild.

They are on pace for their worst record since 2000 – the first year Bill Belichick took over after being traded from the New York Jets.

Could the Belichick dynasty end in the same way?

Could the Patriots actually trade away the head coach that delivered 6 titles to New England?

According to Football Morning in America’s Peter King, it’s not that crazy of a thought.

.@peter_king on the idea of the #Patriots trading Bill Belichick: “I don’t think it’s a dumb idea,” pic.twitter.com/ou87vxAQ6b

Belichick is arguably the best trade chip the Patriots have.

King believes the Patriots would want to “get two 1s” for the future Hall of Fame coach.

However, he doesn’t see any team offering up that much for a 68-year-old coach.

Most coaches retire around 70, so it would seem Belichick doesn’t have many years left.

It’s no secret the once-great Patriots dynasty is either dead or currently dying.

There is little talent on this roster and it is clear the gamble on Cam Newton is not paying off.

In fairness to Newton, he was not given much to work with.

New England has one of the worst groups of skill position players in the league.

This offense ranks 29th in points scored per game, 30th in passing yards per game, and 29th in giveaways.

The defense has had a steep drop off from last year’s top-ranked unit.

Not bad numbers by any means, but nowhere near as good from last year when they ranked 1st in both of those categories.

The trade deadline came and went with the Patriots only making one move – sending a 2022 6th round pick to Miami for WR Isaiah Ford.

If King’s estimate of Belichick’s trade value is accurate, he would be the only asset the Patriots have that is worth a potential 1st this offseason.

One could make an argument for Stephon Gilmore, but that is unlikely.

The Detroit Lions just recently traded Darius Slay to the Philadelphia Eagles for a 3rd and 5th round pick.

It is tough to imagine a team giving up more than a 2nd for a corner who is 1 year older than Slay, even if Gilmore is more talented.

Offensive lineman Joe Thuney is playing this year on the franchise tag, while younger players Chase Winovich, Isaiah Wynn, and Shaq Mason are not players the Patriots should look into trading.

The Patriots should field any offers for Belichick.

Belichick has always been of the mindset that the NFL is a business.

Better to get rid of a player a year early instead of a year late.

Belichick is not immune to this strategy.

Once you get past the idea of trading Belichick, one has to think of the potential return the Patriots could fetch.

Belichick originally arrived in New England in exchange for the 16th pick in the 2000 draft.

20 years ago today: the greatest trade in NFL history. pic.twitter.com/izcPs4h0GV

King’s belief that the Patriots should place Belichick’s value at two 1st’s is not far-fetched.

It would be tough to find a suitor willing to pay that price, though.

As previously mentioned, Belichick is already 68.

King wonders “are [teams] going to trade away two 1s for a guy who might only coach for four years?”.

He says not to immediately dismiss the idea, as some teams may be willing to cough up the picks for the legendary coach.

The Patriots will also have to discuss any trade with Bill.

“But the other question is, clearly, would Bill want that? I have absolutely no idea if he would want that or not. If you traded him to be the HC of the NYJ would Bill have any desire to do that at all? And, if you did that you’re trading the first pick in the draft and next year’s 1 for Bill Belichick? Maybe if you say we’ll trade you the Jamal Adams’ pick at the end of the round and something else, that would be interesting. I also think, and again I do not know this at all, but just my gut feeling, there’s a big difference for Belichick between the New York Giants and the New York Jets.”

Peter seems to believe the Giants and Jets would be two potential trade partners for the Patriots.

Joe Judge is halfway through his first year with the Giants.

Adam Gase has been, at best, a disaster with the Jets.

Both teams have a history with Belichick; neither has stable coaching situations at the moment.

It would almost be poetry for the Patriots to jumpstart their rebuild by trading Belichick.

Are The Patriots Real Playoff Contenders?

Will Bailey Zappe Now Be The Patriots Starting QB?

Is Kyle Dugger The NFL's Most Underrated Safety?

Should The Patriots Stick With Bailey Zappe?

Bailey Zappe Is Making Shocking History As A Rookie

Patriots Will Be Missing 2 Key Players Versus Browns

The Patriots Are Bringing Back A Familiar Face On Defense