You are here: Home / Sports / NFL / How Bad Is Justin Herbert’s Injury? 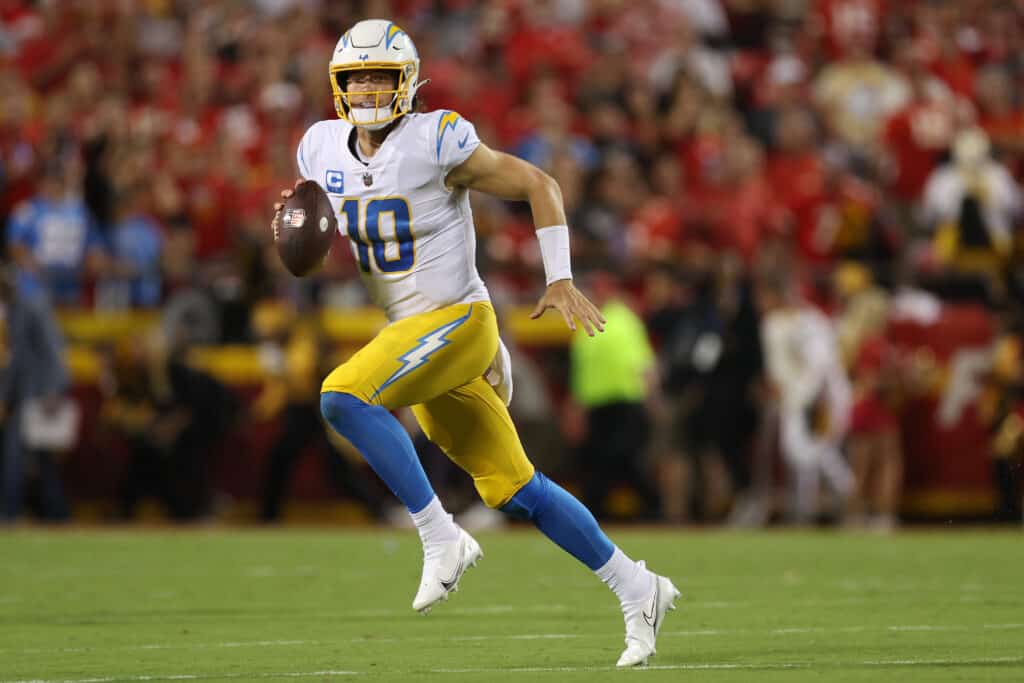 Thursday was a bad day for the Los Angeles Chargers, as they blew a 10-point second-half lead and lost to their old AFC West rival Kansas City Chiefs, 27-24.

But it got even worse, as superstar quarterback Justin Herbert hurt his ribs late in the fourth quarter and appeared to be in serious pain the rest of the contest.

It added injury to the insult of throwing a game-changing interception near the Chiefs’ end zone that was returned for a touchdown early in the final frame.

Immediately, the concern shifted from the loss and Herbert’s miscue to his health moving forward.

The next day, he was diagnosed with a fracture in his rib cartilage, and he will be considered day-to-day.

Chargers’ QB Justin Herbert was diagnosed today with a rib cartilage fracture, Brandon Staley told reporters. The team will assess where he’s at Wednesday to determine whether he can practice.

“We’ll know a lot more about practice and stuff like that on Wednesday,” Staley said. “Going to take the weekend and beginning Monday, Tuesday to learn a lot more.”

It could’ve been a lot worse, and the good thing is since Los Angeles played on a Thursday, it will have an extra three days to rest Herbert and try to get him right for Week 3.

For the first three quarters, Herbert was having his usual fantastic game.

He finished the game with 334 yards on 33 of 48 pass attempts, along with three touchdown passes.

Herbert looked very adept at getting passes through to his receivers within a tight window while placing the ball precisely in the best spot where they could get their hands on it.

This throw by Justin Herbert makes no sense if you're watching this game and know what's going on right now. pic.twitter.com/7x8PMRYKxb

Once he suffered his injury, he had plenty of trouble moving around, yet he still managed to be very productive on his team’s final possession.

With Los Angeles trailing 27-17, he converted a touchdown pass to Joshua Palmer on a fourth-and-seven to keep the team in the contest.

However, there was just 1:11 remaining, and its onside kick attempt failed, sealing the win for Kansas City.

In doing so, it proved it is still the best team in the division, but there are reasons to be encouraged about the Chargers.

For one, Herbert didn’t have a bad game per see – in fact, he had a very good game overall, besides that ill-fated pick-six.

Had it not been for that pick-six, the Chargers would’ve had a good chance of winning, and the discussion surrounding him and his team would be very different right now.

For another, L.A. wasn’t exactly at full strength.

The Chargers Fought Hard Without Their WR1

Keenan Allen, the Bolts’ top wide receiver, was out of action on Thursday due to an injury he suffered in their Week 1 win over the Las Vegas Raiders.

Allen has made the Pro Bowl each of the last five seasons, and not having him certainly hamstrung the team.

It is not an excuse for the loss, but it is something to keep in mind moving forward.

In Allen’s absence, Mike Williams, who was quiet in Week 1, had 113 yards and eight catches while tight end Gerald Everett caught six balls for 71 yards.

The Chargers’ schedule will get easier for a while, as they will host the Jacksonville Jaguars next week.

1 Stat Proves Why Justin Herbert Has To Be Excited

The Chargers Move Quick And Fill The OC Role

The Chargers Have An Intriguing OC Candidate

The Chargers Must Make A Bold Move To Turn Things Around

The Chargers Make A Big Change To Start The Offseason

The Chargers Keep Finding Ways To Disappoint And Frustrate Their Fans

Can The Chargers Defeat The Jaguars Without Mike Williams?

Brandon Staley Has Put Himself On The Hot Seat

Chargers Get An Injury Update On LT Rashawn Slater

How Bad Is Justin Herbert's Injury?