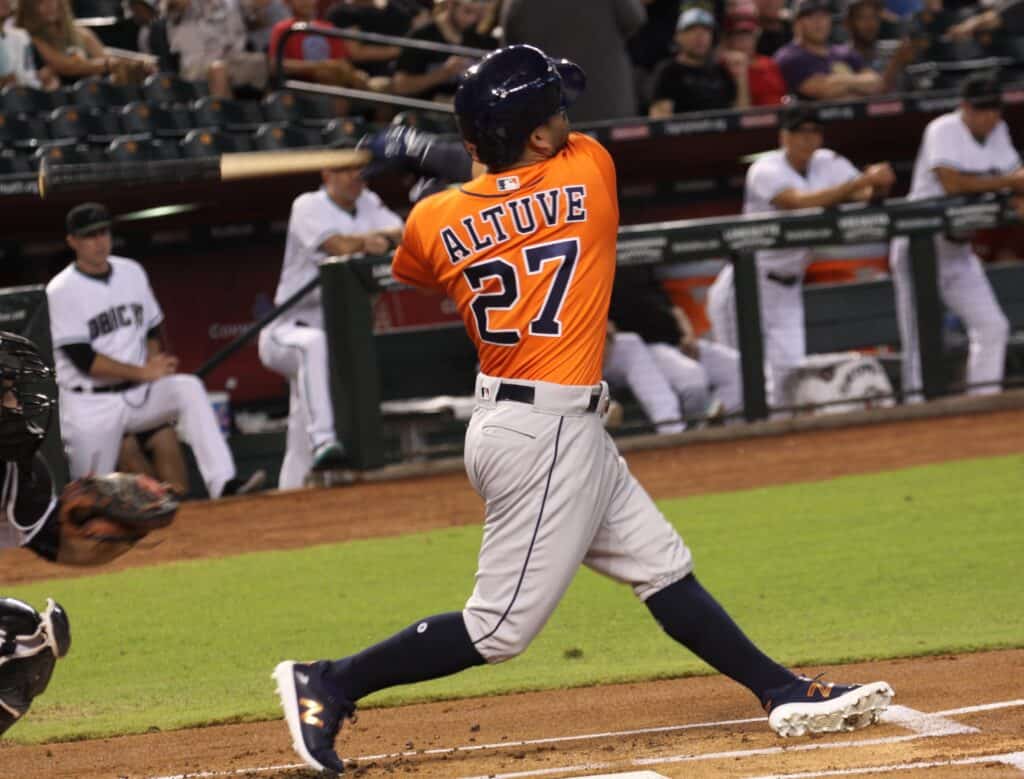 The Houston Astros are coming off a successful 2020 campaign that saw them make a deep playoff run.

Though the franchise wasn’t able to walk away with another World Series victory, they emerged as one of the league’s best teams after struggling during the regular season.

The Houston Astros have been eliminated from the playoffs. pic.twitter.com/wvpkkgu5Kq

Of course, this came as they were painted villains of the MLB after the revelation of their 2017 cheating scandal.

Now, as their stars age and enter the free agent market, the team’s core is beginning to fall apart.

This started as their star outfielder George Springer inked a contract with the Toronto Blue Jays this offseason.

The loss of Springer leaves a major hole in their lineup as they enter the 2021 season.

Here is an early look at the Astros projected lineup for this season.

If the season started today, here is how the Astros lineup would shape up:

While the absence of Springer is noticeable, this is still a dominant lineup.

It will likely remain as one of the American League’s best, producing runs at an elite level.

Altuve, Bregman and Correa form arguably the best infield combination of any in the majors.

Though they struggled in 2020, there is reason to believe that each will bounce back this season.

The resigning of Brantley brought back one of the best pure-hitting lefties in the entire league.

Michael Brantley will sign a two-year, $32M deal with Astros despite previous reports he signed with Blue Jays, per @MarkBermanFox26 pic.twitter.com/jx0BmPjQ6v

He gives them a balance in the middle of their order between power and contract.

He will look to return from that playing at a high level once again, being just one year removed from winning the Rookie of the Year award.

While anything can happen, it would be safe to bet on this lineup rebounding this year and proving to be a tough out for opposing pitchers.

Over the last couple of seasons, the Astros rotation has taken some critical hits.

The loss of Gerrit Cole to the New York Yankees in free agency took away one of the game’s most dominant pitchers from their rotation.

Then, the team got devastating news as Justin Verlander tore his UCL and underwent Tommy John surgery.

He will likely be out for most of the 2021 season as he rehabs from the surgery.

This was a major blow as the Astros lost one of the best pitchers in recent memory.

However, they still have Zack Greinke, who has shown little signs of slowing up.

Though he struggled in 12 starts last season, he will likely return to form as an elite starter at the top of the Astros’ rotation.

Framber Valdez and Lance McCullers Jr. will both look to make major steps forward this season.

They will both need to be good options in the rotation for the Astros to have much hope at making another deep playoff run.

While the Astros still have a very talented team, their recent losses in free agency and to injury are becoming noticeable.

They just aren’t quite as deep and talented, surrendering their spot as the best team in the American League.

However, expect them to still make some noise in the playoffs this year.

The Astros Lineup Remains Stacked In 2023