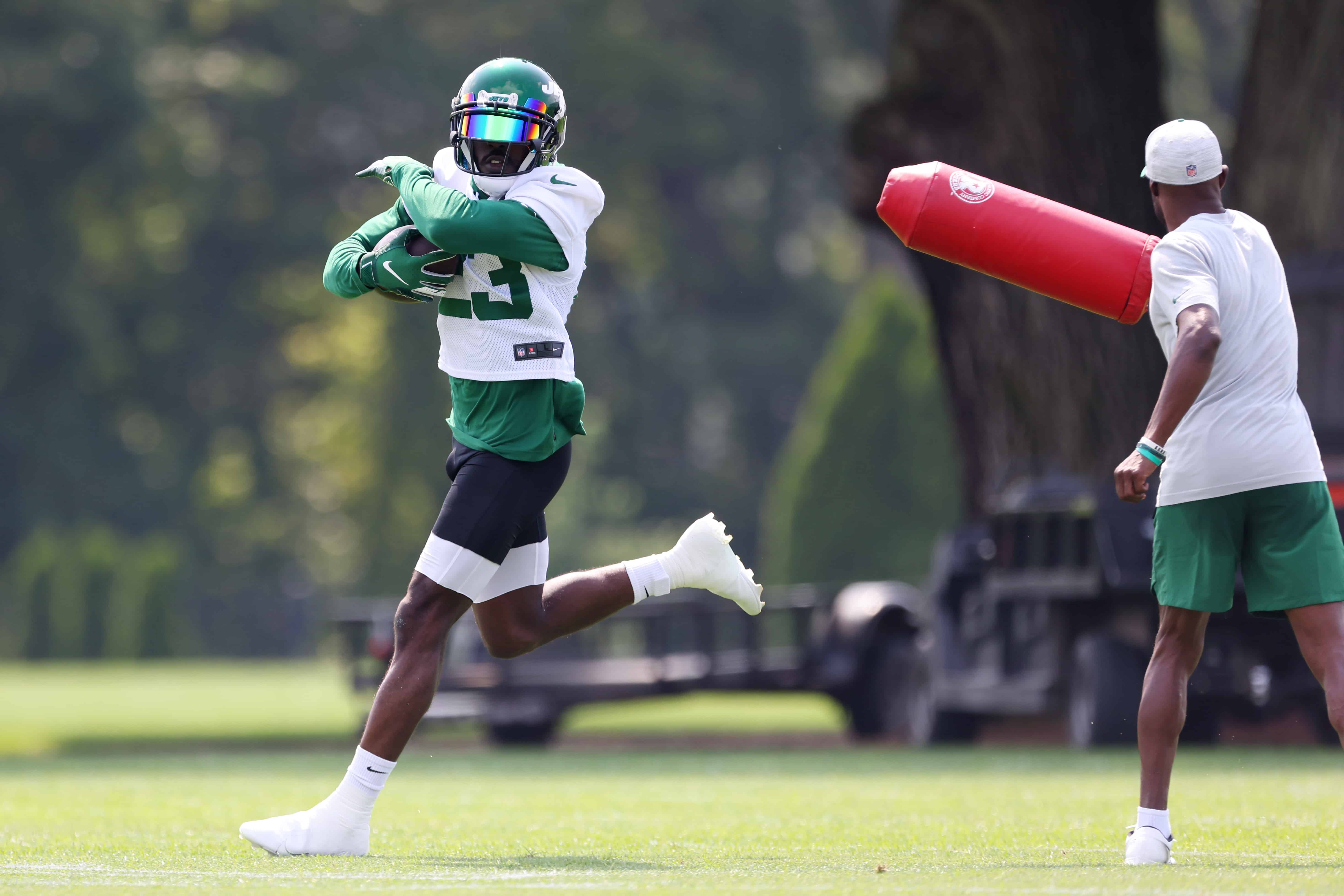 Over the past nine seasons, four times has a running back won the Associated Press NFL Offensive Player of the Year award.

Last season, the Tennessee Titans’ Derrick Henry achieved the accolade after rushing for 2,027 yards and 17 touchdowns.

The running back position is in an interesting spot amongst NFL fans and media members at this moment.

Some believe it’s best to wait until the later rounds in the draft to try and find higher value.

The Pittsburgh Steelers proved they don’t believe in that theory as they selected Najee Harris No. 24 overall in the 2021 NFL Draft.

But no matter how you find your franchise running back, it’s evident how important they are to the offense.

The running back is a catalyst whose play not only helps the team’s ground game but opens up opportunities in the passing game.

Not every team is going to have Henry, but these three teams currently enter the 2021 NFL season with less than impressive starting running backs.

Chase Edmonds has been a member of the Arizona Cardinals for the past three seasons after being selected in the fourth round of the 2018 NFL Draft.

In that time he has rushed 217 times for 959 yards and seven touchdowns.

He has added 85 receptions for 610 yards and five additional scores.

Last year, he was forced to play behind Kenyan Drake, who is now with the Las Vegas Raiders.

He started just two games and has just four games started under his belt in his brief NFL career.

But despite that relative inexperience, the Cardinals listed the fourth-year man as the starter on their first unofficial depth chart.

His 53 catches ranked third on the Cardinals last season.

However, thus far, he has yet to prove he can be an all-around running back for Arizona.

Chase Edmonds has 217 career carries in the NFL.

Of those 217, only one came inside the opponent's 6 yard line.

Arizona made things tougher on Edmonds by signing former Steeler James Conner to a one-year, $1.75 million contract this offseason.

There’s a chance Conner works as the short-yardage guy while Edmonds continues to focus on the passing game.

Which for the Cardinals, would be great for the offense.

Both players have proven they could be valuable commodities in the NFL.

However, for Edmonds to truly be considered an NFL starting running back, he must prove he is capable of shining in all assets of the role.

Edmonds is a free agent after this season.

This year will essentially determine if he has what it takes to take on an almost full-time role in an NFL backfield.

If he struggles, the Cardinals would have no problem inserting Conner into the starting role.

The New York Jets have a new head coach in Robert Saleh.

They also have a new offensive coordinator in Mike LaFleur.

Both worked together with the San Francisco 49ers.

Tevin Coleman was a running back with the Niners during both coach’s tenures.

Once they moved to the Jets, it seemed only right to bring in their former running back.

Signing Coleman made sense for the Jets as he already knows the system LaFleur is going to run.

However, while system knowledge is great, Coleman has done a terrible job of staying on the field during his brief NFL career.

In his six-year career, Coleman has appeared in all 16 games just once.

He missed eight games last season with a sprained knee.

Coleman hasn’t necessarily been bad throughout his career, as he has rushed 693 times for 2,937 yards and 24 touchdowns.

However, the Jets know he isn’t the future of the position as the team selected former North Carolina Tar Heel Michael Carter in the fourth round of the 2021 NFL Draft.

Coleman is listed as the starter on the Jets’ unofficial depth chart.

However, if he suffers the injury bug again, or overall just struggles, the calls for Carter to get more playing time will grow louder.

With a brand new coaching staff and a new quarterback in rookie Zach Wilson, it’s hard to imagine immediate success for the Jets.

But Coleman is going to have to both stay on the field and elevate his game to new heights to make it the whole 2021 season as the Jets’ starting running back.

The Houston Texans running back room is a bit of a mess.

They have four players in Mark Ingram, Phillip Lindsay, David Johnson, and Rex Burkhead who have all played in at least 40 games at the NFL level.

But all are aging veterans who don’t necessarily move the needle.

With Henry playing in the AFC South alongside the Texans, none of Houston’s current runners even come close to what he brings every play.

Recently, the Texans named Ingram and Lindsay as the co-starters.

Ingram is a 10-year NFL veteran and has been elected to three Pro Bowls.

However, he appeared in just 11 games with the Baltimore Ravens last season, rushing for 299 yards and two touchdowns.

Lindsay spent the first three years of his career with the Denver Broncos, being named to the Pro Bowl as a rookie in 2018.

While he shined then, like Ingram, Lindsay struggled last season, appearing in 11 games and rushing 118 times for 502 yards and one touchdown.

He rushed five times for 14 yards and appears to be the leader in the locker room for the starting duties.

Per PFF: Phillip Lindsay took all of the first team snaps on first and second downs last night. David Johnson was restricted to a third-down role.

But whether the starting role goes to Ingram or Lindsay, the message remains the same.

They would both have to improve dramatically for the Texans to even have some form of feasible running game.

They could prove the world wrong, but it appears as if both runners’ best days are behind them.

The Raiders And Derek Carr Reportedly Have An Arrangement

The Patriots Are Celebrating A Special Anniversary Friday

The Dolphins Continue To Stand Alone Atop The NFL

An NFL Superstar Shined In A New Pro Bowl Event

Eagles Enter The Super Bowl With A Must-See Mark

CBS May Have A Tony Romo Problem

The Patriots Have Made Another Move With Their Coaching Staff