You are here: Home / Sports / NFL / Where Do The Raiders Stand In The Playoff Picture? 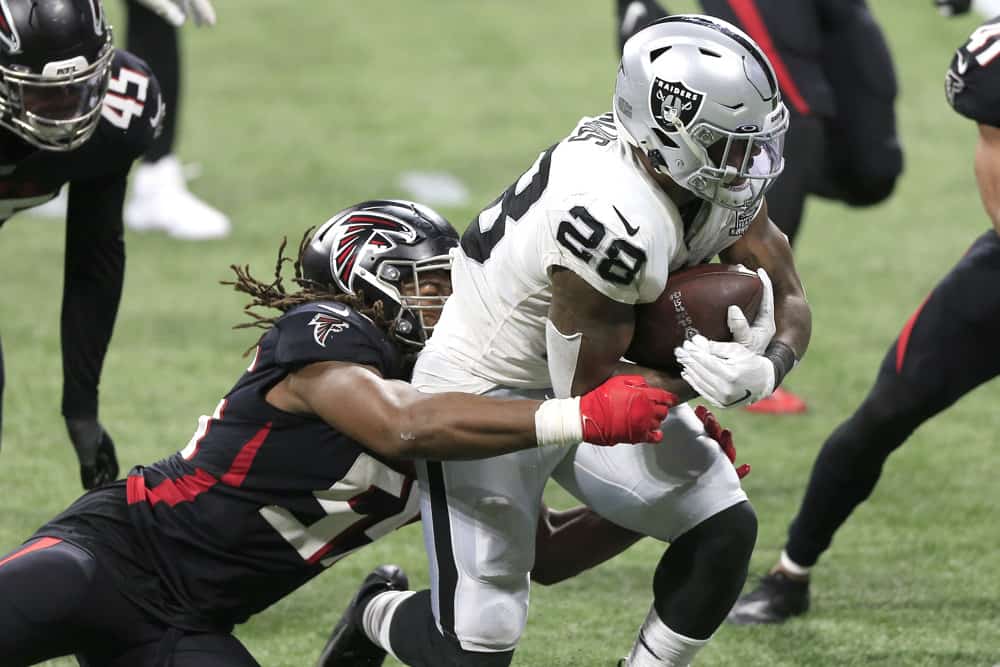 The late Al Davis would be proud of the improvements his beloved Las Vegas Raiders have made over the last two seasons.

Jon Gruden’s Raiders are currently in second place in the AFC West behind the Kansas City Chiefs with a record of 6-5.

If the playoffs started today, they would miss it by one game.

The Colts and Dolphins, with records of 7-4 respectively, would sneak in over the Raiders.

After finishing 4-12 and 7-9 in his previous two years, the Raiders have been a pleasant surprise in their first year in Vegas.

Seems like decades ago when so many were clowning Gruden for giving up Khalil Mack and tons of chatter on how he was running that franchise into the ground.

They lost tonight, but those Raiders look to be in some pretty good hands.

As for Mack’s Chicago Bears……..

With five games still left in the regular season, the question must be asked:

Can the Raiders keep this up and force their way into the playoffs?

Let’s take a look at some potential assets and liabilities on their path.

Jon Gruden has put his team in a position to be playoff contenders largely thanks to a balanced offensive attack that ranks in the top half of the league in scoring.

They rank 17th in yards compared to 11th and 23rd the previous two years.

While their yardage has dipped a bit, I am sure Gruden and offensive coordinator Greg Olson will sacrifice some yards for points and efficiency.

Speaking of efficiency, Derek Carr is really coming into his own as the Raiders’ signal caller.

After two not-so-spectacular years with Jon Gruden, many questioned Carr’s ability to operate Gruden’s offense as well as the coach’s commitment to allowing him to do so.

The quarterback has put those questions to rest in 2020 with one of his best season’s since his MVP bid in 2016.

He has thrown 19 touchdowns to only 4 interceptions with a quarterback rating of 104.9.

With weapons like Josh Jacobs and Darren Waller, Carr does not have to be special.

He just needs to be efficient.

So far, he has been just that.

While the Vegas offense has improved from last season, their defense may be what keeps them out of the playoffs.

Their defense ranks 28th in points allowed, which is worse than their 2019 ranking of 24th and only slightly better than their last place ranking in 2018.

While they have been fairly competent in stopping the run, their pass defense clearly needs some work.

In a division with Patrick Mahomes, being able to defend the pass will have to be a point of emphasis going forward.

The defense also has a hard time getting off the field.

It is easy to sometimes blame an offense for a defense’s struggles.

However, that is not the case with the Raiders.

If they want to make a run at the playoffs, the defense must be able to get off the field.

Possibly the biggest reason the Raiders still have a fighting chance is their schedule going forward.

Three of their last five games are against teams with losing records (the Jets, the Chargers, and the Broncos).

The two winning teams they face are, coincidentally, the Colts and Dolphins, the two teams they trail in the playoff race.

While the Colts have a favorable remaining schedule facing Houston twice and the Jaguars, Miami’s is a bit tougher.

The Dolphins face the Bills, Patriots, and Chiefs.

If they win the games against the losing teams and can beat either the Colts or the Dolphins, they could put themselves in a good spot heading into the 2020 playoff picture.

Even after a minor setback coming from a blowout loss to the Falcons, the Raiders still have plenty of assets on their side as they finish out the season and head into the playoffs.

All they have to do is just win, baby.

Josh Jacobs Is Feeling The Effects Of His Big Game

Josh Jacobs Was On His Own Level Against Seattle

Josh Jacobs Had A Legendary Performance On Sunday

Analyst Reveals Why The Raiders Are Stuck With McDaniels

Could Sean Payton End Up In Las Vegas?

Is This Derek Carr's Last Season With The Raiders?

Could Josh McDaniels Be One And Done?

Fans Are Calling For Josh McDaniels To Be Fired

Raiders Legend Has A Hopeful Message For The Fans

Could Josh McDaniels Already Be On The Hot Seat?

NFL Fans Are Not Happy With Josh McDaniels

Where Do The Raiders Stand In The Playoff Picture?