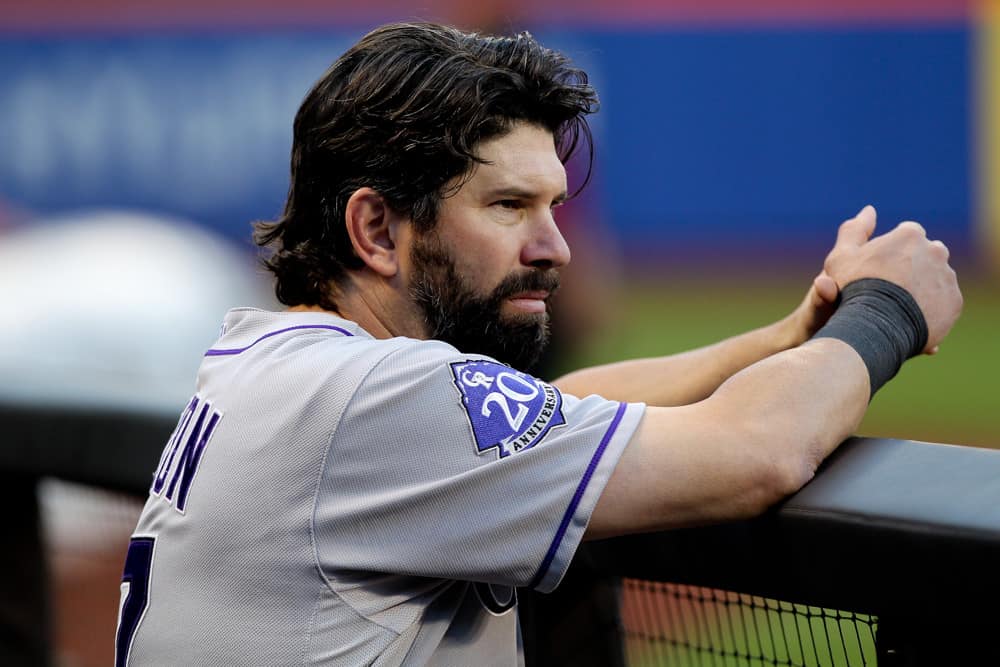 Former Colorado Rockies first baseman Todd Helton was once one of the MLB’s best hitters.

He put together a solid, 17-year career where he was consistently one of the best players in the game.

With another Hall of Fame induction cycle passing and Helton failing to earn much of the vote, it is worth looking at his career.

If you don't set goals high, you're not trying. Always push yourself and go after your dreams. -Todd Helton pic.twitter.com/ZZCWCgYsrd

Here is an in-depth look at the career of the beloved first baseman and what he is up to today.

Along with that, we will take a look at his Hall of Fame resumé.

Face Of The Rockies Franchise

Helton was drafted by the Colorado Rockies in the first round of the 1995 MLB draft.

He was expected to enter the Rockies organization and make a quick difference for the franchise.

Happy 47th birthday to #Rockies legend, Todd Helton. Here’s footage of his first #MLB homer back in 1997. (via MLB/YT) pic.twitter.com/POV3xkyAkb

However, he became a full-fledged starter the next season.

When he got the opportunity, he also stepped up and established himself as an above-average season.

In his rookie season, Helton played in 152 games and tallied a .315 batting average with 25 home runs.

This was good for a runner-up in the Rookie of the Year voting.

Helton began a string of stellar seasons following this.

Over the next 10 seasons, Helton posted a batting average above .300 each year while adding significant home run totals.

His best year came in 2000, as Helton led the league in hits, doubles, RBI, batting average and OBP.

The raw numbers are even more staggering.

Todd Helton is a HOF’er! No doubt! I was fortunate enough to play with him for 2 months in 2000. He hit .372! He was the best player on the field every game we played together except when Barry Bonds was on the field. Great teammate and leader too! #shegone ⁦@MLB⁩ pic.twitter.com/1yWLWBKDOx

These are unbelievable numbers, especially as he was snubbed of an MVP award.


In fact, he finished fifth in the MVP race even after leading the league in wins above replacement.

This embodied Helton’s entire career: he was an underrated and underappreciated superstar in the game.

While he wasn’t the flashiest player, he actually had one of the best careers from a first baseman in MLB history.

Only Musial, Ruth, Foxx, Williams, Hornsby, and Gehrig have a higher slash line than him.

His OPS is 18th highest in Major League history.

He owns the 7th highest WAR amongst first basemen.

Todd Helton should be in the Hall of Fame alreadyhttps://t.co/2ZRP347U9m via @YouTube pic.twitter.com/zgqYcjw3jx

There are some who discredit Helton for playing in the notoriously offense-friendly Coors Field.

With former teammate Larry Walker earning Hall of Fame honors in 2019, this should ease the process in his favor.

“Hopefully this does work for Todd.” Walker said after being elected to Cooperstown. “Obviously, he’s very Hall of Fame Worthy.”

It is shocking that Helton still is getting snubbed for the Hall of Fame.

He is the greatest player in Rockies history and has the statistics to back himself up.

Only time will tell, but there is a good chance that Helton makes it to Cooperstown someday.

Where is Helton Today?

Since retiring from the MLB, Helton has struggled with alcohol issues.

He was arrested for driving under the influence in 2019 and admitted into a rehabilitation program.

However, he was arrested once again for DUI in early 2020.

This came after he earned a job with the University of Tennessee baseball team as a volunteer director of player development.

In doing this, Helton was giving back to the college program that helped build him.

He won the Baseball America College Player of the Year while with the Volunteers.

Helton also was the starting QB for the Tennessee football team.

Here is @Rockies legend Todd Helton unleashing a 53-yard BOMB while he was the QB for @Vol_Football! 🚀🏈 pic.twitter.com/hKuAkcSEv5

However, he is no longer with the program.

Even though he has had a difficult time over the last couple of years, he remains one of the most loved players in Rockies history.

He is, without a doubt, the best player the franchise has ever had.

It is only a matter of time until he makes it into the Hall of Fame.

The Rockies Have Added A Coach To Fix The Offense

The Rockies Are Surprisingly Finishing The Season Strong

Kris Bryant Finally Showed Off His Power For The Rockies

Rockies Make History By Slowing Down The Dodgers

Rockies Pitcher Chad Kuhl Did The Impossible Against The Dodgers

C.J. Cron Takes Home A First In The National League

C.J. Cron On A Historic Home Run Pace To Start The Year

Rockies And Kyle Freeland Come Together For A New Deal

Rockies End A Frustrating Drought Against A Top Rival

Rockies Have A New Denver Star Throwing Out The First Pitch

Rockies Show MLB Fans Fascinating Physics Of A Base Hit

Rockies Add Another Starter In Trade With Blue Jays

Kris Bryant Was Smart To Bet On Himself

MLB Fans Have A Lot Of Questions For Kris Bryant