You are here: Home / Sports / MLB / What Happened To Mike Piazza? (Complete Story) 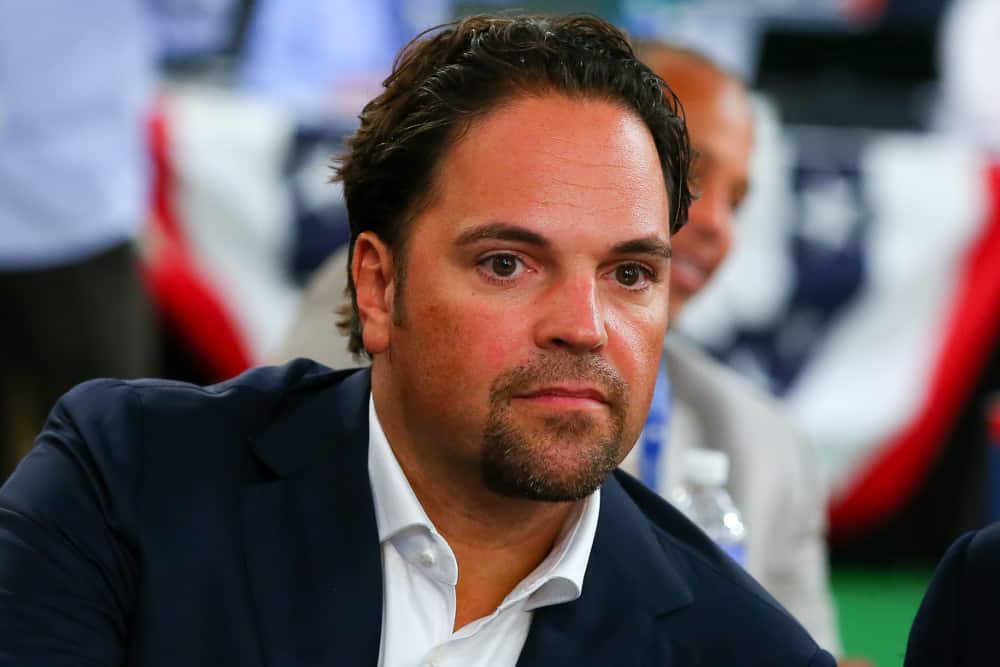 As a baseball underdog, it doesn’t get any more challenging than being a 62nd round draft choice.

From being the 1,390th player chosen in the 1988 MLB Draft, to a plaque in Cooperstown, Mike Piazza defied all the odds.

He is widely regarded as one of those most prolific offensive catchers that has ever played the game.

Piazza grew up outside of Philadelphia, Pennsylvania and admired the game of Phillies’ legend Mike Schmidt.

Little did he know that he would become a legend in his own right.

What ever happened to Mike Piazza?

Vince Piazza, Mike’s father, had his own hopes of playing baseball that ended at 16.

He left high school to begin working to help financially support his family.

Vince accumulated his own wealth selling cars and real estate and made unsuccessful overtures to buy his own MLB franchise.

He recognized Mike’s abilities from an early age and threw with his son each night.

As a childhood friend of Los Angeles Dodgers‘ manager Tommy Lasorda, Vince Piazza asked him for favors from time to time.

One of those favors was to allow Mike to be the Dodgers batboy when the Dodgers were in Philadelphia to play the Phillies.

Another favor Vince Piazza asked of Lasorda was to draft Mike; a favor that paid dividends for both the Piazza family and Tommy Lasorda.

Mike appeared on the Howard Stern show and talked about the favor.

After attending the University of Miami and Miami-Dade Community College, Piazza was taken in the 62nd round by the Dodgers – on the recommendation of Lasorda – in 1988.

He actually was a first baseman but changed to catching in the minor leagues.

His first few seasons in the minor leagues were tough ones, and he actually quit the game for a short time.

However, he put himself on the map as a top prospect when he hit 52 homeruns combined in the 1991 and 1992 seasons.

The Dodgers called him up at the end of the 1992 season and Piazza never looked back.

He was a unanimous selection for the National League Rookie of the Year.

Piazza was a 12 time All Star and a 10 time Silver Slugger.

Mike Piazza’s first career grand slam on 6/6/1994 had a little bit of everything: the homer itself was a no-doubter, the bat flip was legit, and Tommy Lasorda can be seen mouthing “Oh my God” from the #Dodgers dugout. (via MLB/YT) pic.twitter.com/OHLy0FBxTX

One of the most memorable moments of Piazza’s career came in a game ten days after the 9/11 attacks of 2001.

Baseball returned to New York on that night and Piazza hit an iconic homerun in the game to put the Mets ahead.

It was an emotional moment for players and fans everywhere.

“Sept. 11, 2001 is a day that forever changed our lives,” Piazza said. “To witness the darkest evil of the human heart and how it tore many loved ones from their families will forever be burned in my soul. But from tragedy and sorrow came bravery, love, compassion, character and, eventually, healing.

“Many of you give me praise for the two-run home run on the first game back on Sept. 21 to push us ahead of the rival Braves. But the true praise belongs to police, firefighters, first responders, who knew they were going to die, but went forward anyway.”

His number 31 is retired by the New York Mets.

He is a member of both the New York Mets and Major League Baseball Hall of Fame.

Piazza faced 1,007 pitchers during his career.

He had amazing success against the Atlanta Braves ace Tom Glavine with 6 homeruns and a .360 batting average over 75 at bats.

Glavine, also a Hall of Famer, said this about Piazza when Piazza was selected for the Pro Baseball Hall of Fame in 2016.

“Mike was a special player. The kind of guy who offensively, could change a game, carry a team…All those years we played against him, whether he was with the Mets or Dodgers, he was always the first guy you would identify as: this is the guy we’re not going to let beat us.”

Baseball has been Piazza’s life so it’s not surprising he figured out how to stay involved as his MLB career wound down.

A logical place to do it was with the World Baseball Classic Italian team since Piazza is of Italian heritage.

Piazza has a long working relationship with the Italian team; he started by playing for the team in 2006.

He transitioned to more of an advisory role in 2010 and 2012 as the instructor of the Italian Baseball Academy.

#TBT New Hall of Famer Mike Piazza was a coach for Team Italy in the 2009 World Baseball Classic. pic.twitter.com/sLT4aPxjU7

Piazza used his 70 million dollar net worth to venture in a brief ownership of A.C Reggiana, which is an Italian Soccer club from 2017-1018.

However, shortly after Piazza’s purchase, costs of the club started rising

Piazza put his wife Alicia in charge of running the team and she immediately started cutting costs.

Some of these measures included having players wash their own uniforms, which insulted many of them.

“The year before Piazza bought Reggiana, the club finished in seventh place in its division, with operational costs of around 500,000 euros,” Robert Andrew Powell explained in The Athletic. “In Piazza’s first season with the club, Reggiana finished in fifth place, but at a cost to Piazza of more than six million euros.”

Piazza tried to put the team up for sale, but a buyer was never found and a judge declared the club bankrupt.

Piazza planned to manage the Italian national team in both the 2020 European Baseball Championships and the 2021 World Baseball Classic.

Hall of Fame catcher Mike Piazza has agreed to manage the Italian baseball team, he announced in a tweet Wednesday.Piazza said he will manage the team for the 2020 European Baseball Championship and the 2021 World Baseball Classic. https://t.co/EuW4sEea7i pic.twitter.com/dJow1KhRn5

But, the Coronavirus pandemic has put these plans on hold.

Piazza has been married since 2005 and has two daughters and a son.

His family has homes in Italy and in Florida.

Max Muncy Discusses His Health For 2023

The Dodgers Have Reached Elite Status In Recent Years

Dodgers Show Off A Young Star Putting In The Work

Tony Gonsolin And The Dodgers Are Battling Over Money

Dodgers Bring Back A Familiar Face

2 Dodgers Pitchers Are Tied For A Historic Mark

The Dodgers Have Added A Key Front Office Member