You are here: Home / Sports / MLB / What Happened To Kerry Wood? (Complete Story) 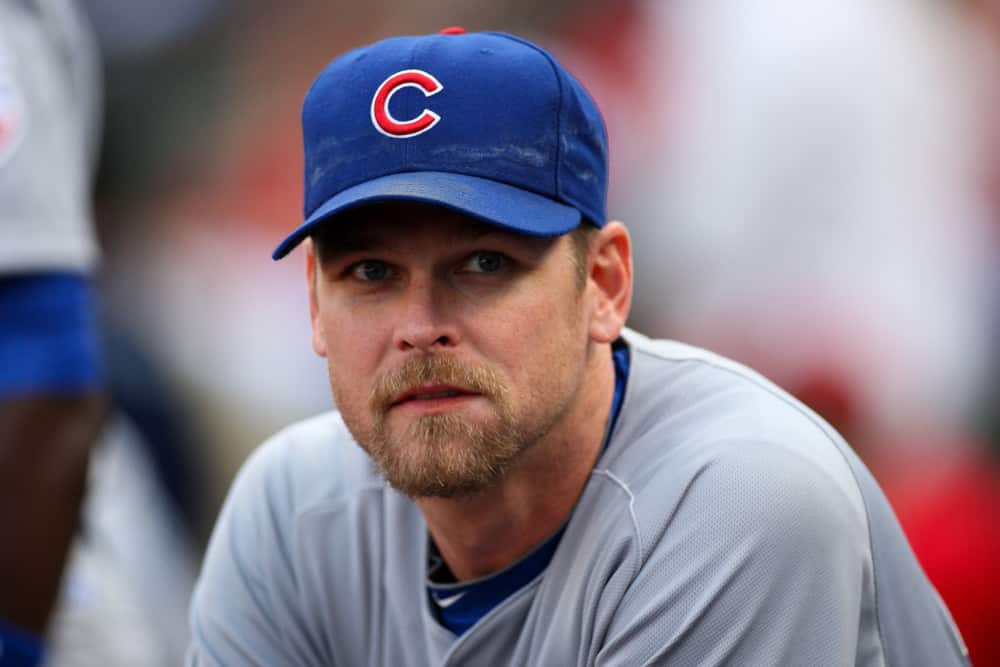 In 1998, Kerry Wood burst onto the MLB scene with the Chicago Cubs as a hard throwing pitcher with a devastating breaking ball.

Fans will remember him for his ability to strike out batters while having very little control over his pitches.

He was a strikeout machine as a rookie, tallying 233 K’s over 166.2 innings pitched.

He led the majors with 12.6 strikeouts per nine innings which, at the time, set a Major League record.

It was also in May of that year when Wood struck out 20 batters against the Houston Astros to tie an MLB record.

During this game, he made Hall of Famers Jeff Bagwell and Craig Biggio look foolish at the plate, striking the two out four times.

I mean, just take a look at these highlights from that game:

Here's 110 Seconds from day that Kerry Wood was the Filthiest Pitcher to Ever Take a Mound. 😱 pic.twitter.com/v7oYBwWU7X

However, after this breakout rookie campaign, Wood was never able to reach the same level of success.

While he did put up solid numbers throughout his career, he eventually tapered off.

It was a sad end to a career that had proved to be promising.

What happened to Wood and caused him to never reach the true potential he showed his rookie season?

Here is a breakdown of his career and the unfortunate downfall.

The Downfall of Kerry Wood

Much of this was due to injuries that placed him on the injured list throughout these 13 seasons.

Ultimately, this derailed his career.

If I had the power to change MLB history and grant any pair of injury-plagued teammates healthy careers, I'd pick Mark Prior and Kerry Wood.

It began with a sore elbow during the final month of his rookie season.

By the following Spring Training, it did not get any better.

Because of this, he elected to undergo Tommy John surgery and miss the entirety of the 1999 season.

This was also during the steroid age, where offense statistics were very inflated.

While this injury wasn’t the direct end of his career, it set off a chain of events that placed him on the injured list four different times.

Starting in 2004, Wood suffered injuries that shelved him for large chunks each season.

A triceps injury in 2004 forced him to miss a few months.

Shift To The Bullpen

By this point in his career, Wood proved that he wouldn’t remain durable enough to be in the starting rotation.

In 2007, the Cubs offered him a spot in their bullpen which aimed to give his career new life.

However, he still missed time that season with even more arm injuries.

The next season, Wood was elected to the All-Star game as a reliever as he remained relatively healthy.

Going to do something a little different on Wednesdays for a while. While we love our random Cubs, how about we take a look at some Cub greats wearing “wrong jerseys” after they left the @cubs?

At this point, the 35-year-old didn’t have a ton left in the gas tank for his career.

However, he was able to return to Wrigley Field and end his career on a strikeout.

This put his MLB storybook to a close, giving a sad end to a pitcher that had some of the most potential in the sport.

Wood had the raw talent to become a dominant pitcher in the league.

If he had begun to develop command over his career, the two pitch mix he possessed would have dominated opposing batters.

By adding a third pitch, Wood could have truly become one of the best pitchers of his generation.

When talking about Kerry Wood, it is a sad story of injuries derailing a phenomenal talent.

Because of this, he becomes a true “what-if” question in the sport of baseball.