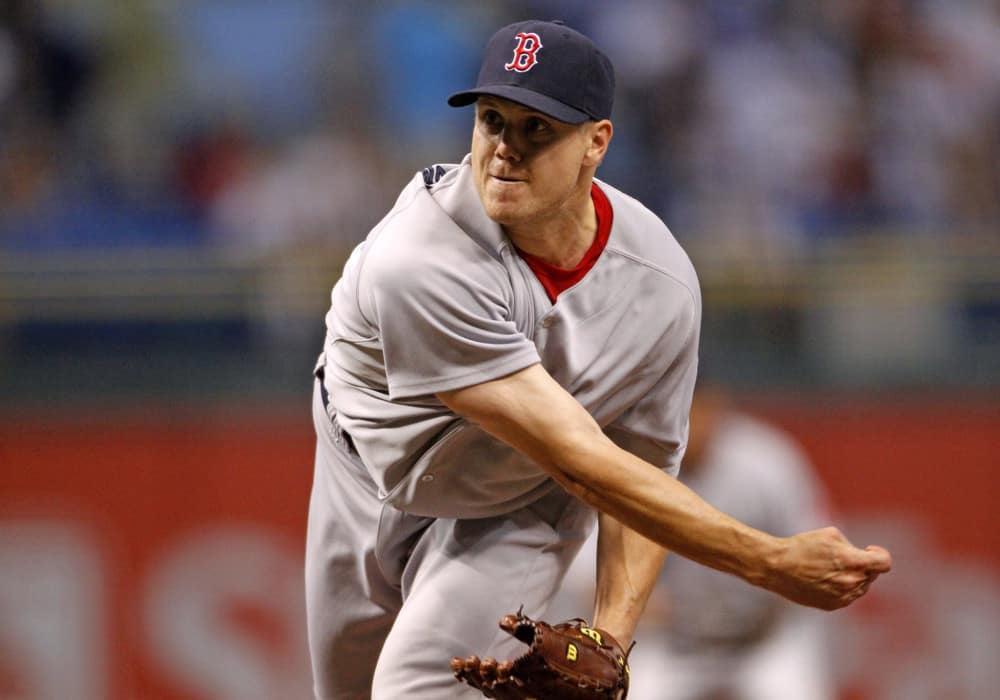 Former Boston Red Sox closer Jonathan Papelbon was once one of the best relief pitchers in the league.

He was a dominant, hard throwing right-hander that consistently stood out in the back end of the bullpen.

The next likely player to go to Cooperstown in a Red Sox cap! pic.twitter.com/L0ChXeT4qV

However, Papelbon’s time in the MLB was short.

During his final seasons, he was clouded with off-field controversies and conflicts with teammates and media.

When paired with his declining skillset, he was quickly out of the league.

We take a look at the career story of Papelbon and see what caused his downfall.

The Red Sox drafted Papelbon in the 2002 MLB Draft out of Mississippi State University.

After spending some time developing in the minors, he made his debut during the 2005 season.

He began his career as a starter, going 5.1 innings in his debut.

However, he quickly found his way into the Red Sox bullpen where he found success.

The next year, he remained in the bullpen and found his way.

In 59 games, he had a minuscule 0.92 ERA and stepped into a shared closer role with Keith Foulke.

These numbers were good enough to earn the first All-Star appearance of his career.

He became the first rookie to ever record double-digit saves in the month of April.

The next season, Papelbon returned as the team’s closer.

He became a critical part of another Red Sox championship run, having a 1.85 ERA and 37 saves.

His postseason was outstanding as well, as he threw 10.2 scoreless innings.

Papelbon is 1️⃣ of 5️⃣ in MLB history with:

Here’s Papelbon shutting the door in G2 of the 07 WS, aided by 1 of his 2 career pickoffs! pic.twitter.com/TAus0WNnvx

This turned him into a beloved member of the Red Sox franchise, being a major part of the team’s second championship in four years.

He continued his standout performances with the franchise until he became a free agent following the 2011 season.

Prior to the 2012 season, Papelbon inked a four-year deal worth $50 million with the Philadelphia Phillies.

#OTD in 2011, Jonathan Papelbon agreed to a 4-year deal worth $50 million with the #Phillies, which was the richest deal ever for a closer at the time.

Papelbon’s final appearance with the #RedSox was the infamous blown save in Game 162 against the #Orioles. #DirtyWater | #MLB pic.twitter.com/HkwllgdSXP

His first season with the team was much of the same

Papelbon pitched well on the mound, posting a 2.44 ERA with 38 saves and 92 strikeouts.

He was voted to his fifth career All-Star game and showed no signs of slowing.

Papelbon struggled in 2013, as playing through a hip injury decreased his average fastball velocity by two miles per hour.

However, he became the source of an ugly controversy late in the year.

After blowing a save against the Marlins, he was booed by Phillies fans.

During this, he decided to gesture towards the fans and was suspended for seven games.

The next year, he got into a heated argument with Phillies radio/TV commentator Howard Eskin.

This led to the team trading Papelbon to the Washington Nationals.

For the rest of 2015, controversy continued to follow Papelbon.

He was suspended for three games after throwing a pitch at Manny Machado’s head.

He also got into a heated exchange with teammate Bryce Harper following one of his at-bats.

During the game, the two got into a fight that included Papelbon grabbing Harper by the throat and shoving him onto the bench.

Jonathan Papelbon fights @Bharper3407 in dugout. Looks like he calls him out for not running it out. @Nationals pic.twitter.com/ncKvJtylmk

This started the rapid decline for Papelbon, as he fell out of favor with the organization.

Pair this with his struggles in 2016, and he was out of the league during that year.

After some rumblings of a return, Papelbon never did and retired from the MLB.

After his retirement, he has stayed out of the sport’s limelight.

He leaves behind a mixed legacy of a good pitcher but an unbearable person.

It is unfortunate as he had the potential of becoming one of the best closers in MLB history.

He will still enter the Hall of Fame ballot in 2022 and carry an interesting case with him.

Xander Bogaerts Only Increased His Value With Latest Award

Red Sox Fan Has Hilarious Offseason Plan For The Team

Xander Bogaerts Receives A Fun Nickname From His Agent

James Paxton Has Made A Decision For 2023