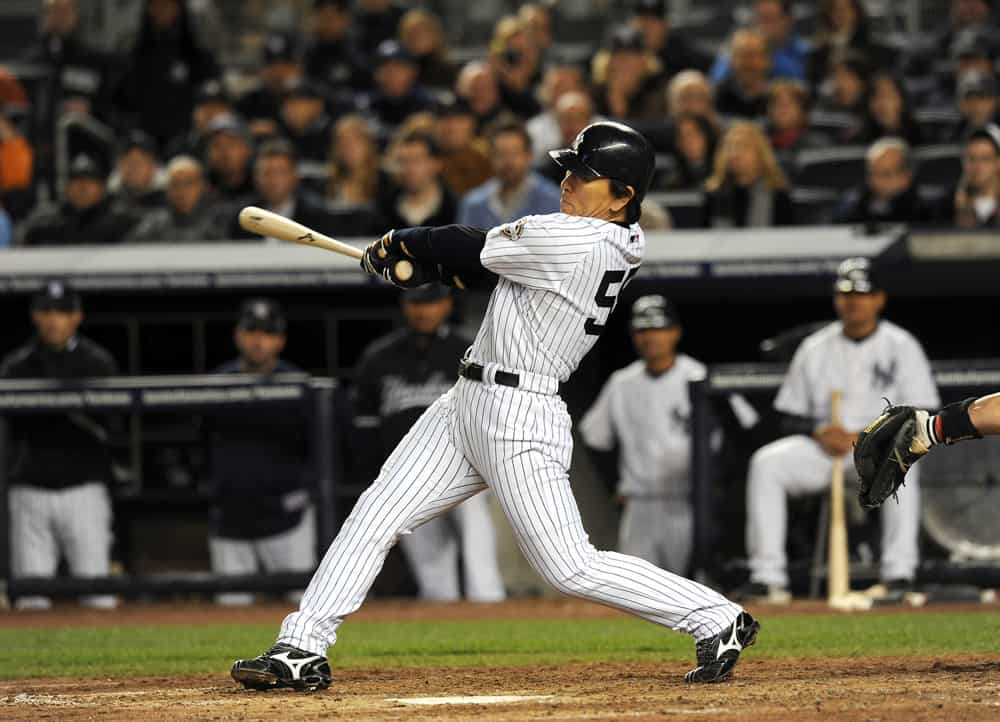 Former New York Yankees outfielder Hideki Matsui developed himself into one of the team’s most beloved players.

Happy birthday to two-time All-Star Hideki Matsui, who helped the @Yankees win the 2009 World Series when he received MVP honors for the series. A fantastic hitter, Matsui compiled 507 home runs between his time in MLB and the Japan League. pic.twitter.com/3U8nM6l4LO

Matsui began his career in Japan, where he was a dominant power hitter.

As he aged, he elected to travel to the United States and play in the MLB.

This followed the lead of star Ichiro Suzuki, who did the same just a few years prior.

In the majors, Matsui put together a solid career in a short amount of time.

Here is a look into his career story, and what he is up to now.

Matsui began his professional baseball career in 1993, when he was just 19 years old.

He joined the Yomiuri Giants of the Japan Central League, struggling in his first season.

However, he was quickly able to find his way in Japan, as the next season he hit .294 with 20 home runs.

On top of this, he posted a stellar .314 batting average.

This started a string of seasons that saw the smooth swinging lefty become one of Japan’s premier hitters.

Over the next six seasons, Matsui hit at least 34 home runs with a batting average above .290.

In his 10 seasons in Japan, Matsui totaled 334 home runs with a career .304 batting average.

Because of his performances, he earned the nickname of “Godzilla.”

Japan embraced him as one of their most beloved players and icons.

When he decided that he wanted to try his hand in the MLB, there wasn’t a lack of interest.

Eventually, he found his way onto the New York Yankees.

On this date in 2002: Hideki Matsui reaches 3-year deal with @Yankees after 10 years with Japan's Yomiuri Giants. pic.twitter.com/xLL5Q6KdhV

Godzilla in the Bronx

In December of 2002, Matsui signed a three-year, $21 million contract with the Yankees.

During his very first game in the Bronx, he slugged a grand slam against the Twins.

He manned left field for the Yankees in his rookie season and put up solid numbers.

He was also an All-Star and the runner-up for the Rookie of the Year award.

His next season was even better, upping his power totals to 31 home runs.

Matsui continued this type of production with the team over his seven seasons with them.

However, a devastating wrist injury in May 2006 shelved him for most of the year.

This would ultimately force him to stay in a stricter DH role.

Throughout his time in the Bronx, he was a consistent 20 home run and .290 hitter.

He was a major part of the franchise over this time, which became even clearer during the 2009 season.

A championship was noticeably absent during his time the Yankees through 2008, an unusual sight for a team that had won four in five years in the late 1990s and early 2000s.

In 2009, the Yankees were bolstered by some major free agent signings.

The resurgence of Matsui also helped.

However, the most important performance of his career would come deep in October.

The Yankees made it to the World Series and faced off against the Philadelphia Phillies.

Matsui was immaculate in the series, dominating every step of the way.

In 13 at-bats, he hit three home runs, had eight RBI and had an amazing .615 batting average.

He was named as the World Series MVP because of this performance.

In the offseason, the aging Matsui left the Yankees and signed with the Los Angeles Angels.

He played three more seasons in the MLB, one with Oakland and Tampa Bay following his stint in L.A.

Though it was a short career, Matsui retired as a beloved figure in the sport.

Since retiring, Matsui has remained relatively quiet and to himself.

He has spent time as a Yankees minor league roving hitting instructor, jumping between different levels.

Matsui has also helped raise money for children affected by the 2011 Tsunami that devastated parts of Japan.

In 2018, he was elected to the Japanese Baseball Hall of Fame as the youngest inductee in history.

A coach in this year’s #JapanAllStarSeries, Hideki Matsui has a place in Cooperstown. Photo: Ron Vesely https://t.co/33xMDCbnDN pic.twitter.com/Mzs1OHGWFl

While Matsui didn’t spend all of his time in the MLB, he still has an impressive career in baseball.

Yankees Fan Demands More Than The Expected This Offseason

Nestor Cortes Is Taking On A Fun New National Role

The Yankees Sent Out A Special Birthday Wish

Yankees Made Sure To Recap Aaron Judge's Legendary Season

2 Additional Moves The Yankees Should Make

Did The Yankees Make The Right Move With Anthony Rizzo?

Nestor Cortes Is Thrilled With A Specific Yankees Return

Stats Show How Aaron Judge Saved The Yankees This Summer

Anthony Rizzo Had A Simple Reason For Staying Put