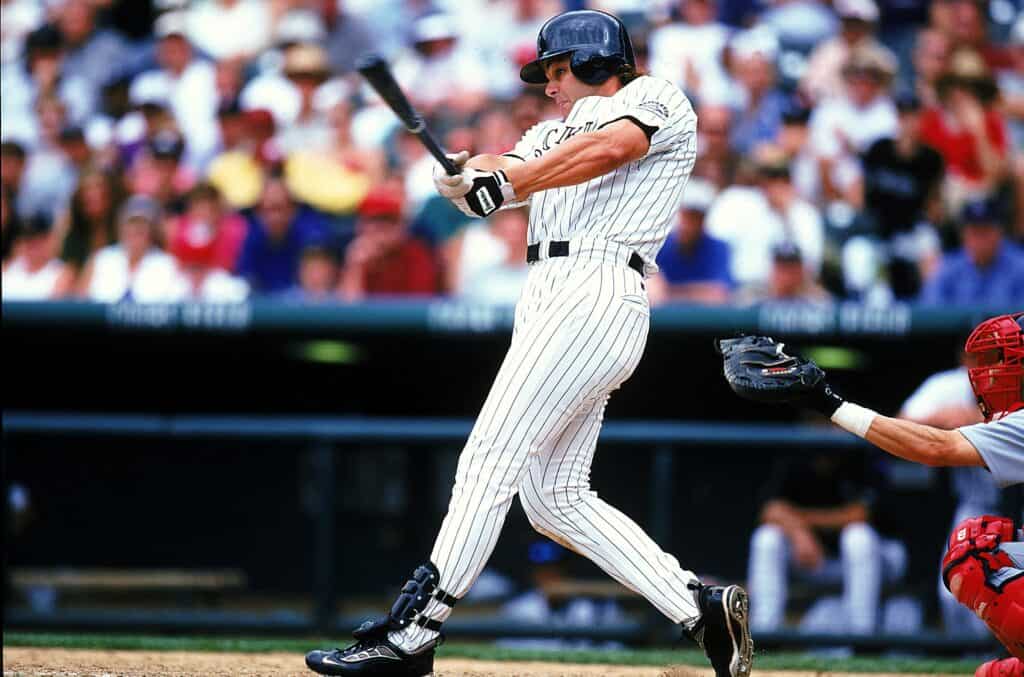 Former Colorado Rockies outfielder Dante Bichette was one of the most dominant hitters of the 1990s.

He was a blend of power and contact, proving to be a tough out for pitchers.

In the height of the steroid era, he put up numbers that still stood out.

Because of this, he became a cornerstone for the Rockies franchise that began playing in 1993.

On August 3, 1993, Gayle Gardner became the first woman to do televised play-by-play of a baseball game, sharing innings with Duane Kiper. When she said Dante Bichette needed a homer in a big spot, he delivered. 💪 pic.twitter.com/UjGdJ0AqUF

Here is a look at the career of Bichette, and what happened to him after he retired.

Bichette was far from a slam-dunk prospect.

He was drafted by the California Angels in the 17th round of the 1984 MLB Draft out of Palm Beach Community College.

From there, he worked his way through the minors posting solid numbers at every level.

This culminated in making his MLB debut in 1988.

In his first taste of the majors, Bichette hit .261 in 46 at-bats with no home runs.

The next season, he bounced between levels as he struggled to get consistent success with the Angels.

However, Bichette would be traded to the Milwaukee Brewers in the offseason for aging start Dave Parker.

back in 1991 #OTD the @Brewers traded Dave Parker to the @Angels for Dante Bichette. This seemed like a huge trade at the time. @AP 3/15/91 pic.twitter.com/44mT2hqmze

His struggles continued as he posted lackluster numbers in 1991 and 1992.

This would put Bichette at a low before he took the next step to assume his position as a top hitter.

The Brewers decided to part ways with Bichette after the 1992 season, sending him to Colorado in a trade.

This would ultimately come back to haunt the Brewers.

In 1993, Bichette pieced each aspect of his game together, registering a stellar .310 average with a career high of 21 home runs.

This would just be the start of his career peak.

He followed this up with the best season of his career in 1995.

He quickly established himself as a scary hitter in the middle of the Rockies order, forming a strong duo with Larry Walker.

While 1995 was his best year, Bichette continued registering outstanding years.

2001 would end up being his final MLB season, as he elected to retire after another solid year in Boston.

He lacked longevity, but Bichette certainly had one of the strongest peaks of his generation.

This puts him far from Cooperstown, but does not take away his reputation as one of the best hitters in the late 1990s.

Since retiring in 2001, Bichette has remained around the game.

He attempted to make a comeback in 2004 when he joined an independent professional team out of Nashua, New Hampshire.

In his first full month with the team, he won player of the month honors after hitting .361 with 13 home runs.

However, the comeback would not manifest into anything beyond this.

He then went on to become a coach where he also found success.

After the 2012 season, he was named the Rockies hitting coach.

This job lasted just a season, as he elected to not return in 2014.

He returned to coaching at the big league level in 2020, as it was announced that he was added to the Toronto Blue Jays coaching staff.

He pushes the earth down 😤 pic.twitter.com/NuJpfU9Wig

He remains with the team in the 2021 season, with an expanded role as a special assistant.

His teachings around how to hit have garnered attention from fans on social media.

Dante Bichette was a great MLB player
Member of the 30-30 Club
4x MLB All Star
Dante is currently a Coach in the Blue Jays Organization
Here’s a look to how he teaches hitting
If you want to be a great hitter, this is something you should watch
pic.twitter.com/60wspweX8q

His position with the Blue Jays served as a family reunion.

The Bichette name has not vanished from the sport, as his two sons are both in professional baseball.

His oldest, Dante Bichette Jr., was drafted by the New York Yankees with the 51st-overall selection of the 2011 draft.

However, he has struggled to get through the minor leagues.

Dante Bichette Jr's bat flips are gonna be a highlight this season (via @StPaulSaints) pic.twitter.com/kUSUSMkb7A

It is a different story for Bichette’s youngest son.

The young shortstop made his MLB debut in 2019 and developed himself into one of the league’s best.

Bo joins a collection of fellow sons of former Major Leaguers on the Blue Jays.

These include Vladimir Guerrero Jr. and Cavan Biggio.

The three form the core foundation of a youthful Blue Jays franchise that is looking to become competitive in the AL East.

A Bo Bichette triple sends 2 runs home in the 9th and this game is TIED! 🤩

For Bo, having a former big leaguer as a father proved to be critical in his development.

He even decided to skip his freshman year of high school in 2013 to work with his dad and the Rockies.

This likely helped to speed up his development, which may have led to him becoming the player he is today.

Now, Bo looks to continue the legacy that his father set years before.

While he was not a transcendent part of the sport, there was a time where Bichette was one of the game’s most feared hitters.

He will always have a special place in the hearts of Rockies fans and a distinct impact on the game.

The Rockies Have Added A Coach To Fix The Offense

The Rockies Are Surprisingly Finishing The Season Strong

Kris Bryant Finally Showed Off His Power For The Rockies

Rockies Make History By Slowing Down The Dodgers

Rockies Pitcher Chad Kuhl Did The Impossible Against The Dodgers

C.J. Cron Takes Home A First In The National League

C.J. Cron On A Historic Home Run Pace To Start The Year

Rockies And Kyle Freeland Come Together For A New Deal

Rockies End A Frustrating Drought Against A Top Rival

Rockies Have A New Denver Star Throwing Out The First Pitch

Rockies Show MLB Fans Fascinating Physics Of A Base Hit

Rockies Add Another Starter In Trade With Blue Jays

Kris Bryant Was Smart To Bet On Himself

MLB Fans Have A Lot Of Questions For Kris Bryant