You are here: Home / Sports / MLB / What Happened To Daisuke Matsuzaka? (Complete Story) 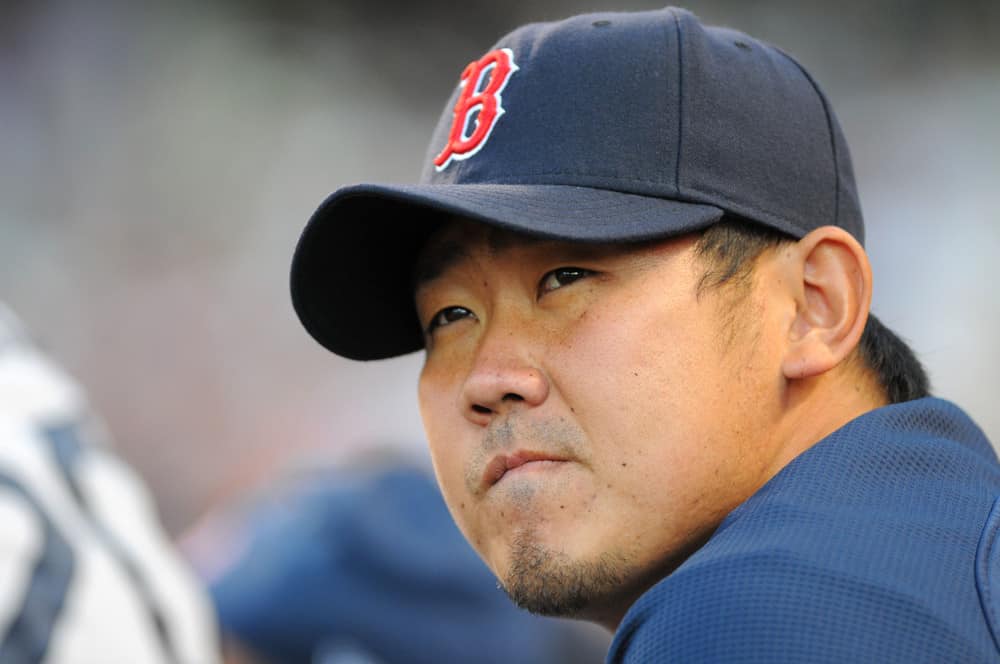 Before Yu Darvish and Shohei Ohtani took the league by storm, Daisuke Matsuzaka was the heralded pitching prospect to leave the NPB for the MLB.

Like his successors, Matsuzaka dominated amateur and professional baseball in Japan and reached legendary status in his home country.

Teams bought into his talent and were willing to pay millions of dollars to secure Matsuzaka’s services.

And for a couple of years, the American audience was able to witness the dynamic skill “Dice-K” possessed.

With a dazzling array of pitches, he was on track to be the cornerstone of the Boston Red Sox for years to come.

However, injuries stemming from overwork derailed what was once a promising career, and he was never able to live up to the hype.

Here is the rise, the fall, and the redemption of one of Japan’s most celebrated players.

Matsuzaka first garnered attention from scouts as a teenager.

In Japan’s annual high school tournament, he threw a total of 398 pitches on back-to-back outings to propel his team to the semi-finals.

Then he capped off the tournament by throwing a no-hitter to win Yokohama High School a national title.

Impressed by his efforts, the Seibu Lions took him with the first overall pick in the NPB.

Matsuzaka began his career with a bang, winning Rookie of the Year in 1999.

Just two seasons later, he won the Eiji Sawamura Award as the best pitcher in the league.

He also led Seibu to a championship in 2004, ending a twelve-year drought for the team.

Across his eight seasons with the Lions, Matsuzaka won the ERA title twice, the strikeout title four times, and was an All-Star six times.

He won tournament MVP of the inaugural World Baseball Classic and led Team Japan to a title that same year.

It was the perfect time to peak, as he soon declared his desire to play overseas.

Taking The League By Storm

With the permission of the Lions, Matsuzaka officially became an MLB free-agent through the posting system.

As a result, any club that wished to sign him had to pay the Lions compensation as well.

The Boston Red Sox blew away the competition, securing the exclusive rights to sign Matsuzaka with a bid of over $51 million.

However, the Red Sox still had to negotiate a contract with Matsuzaka and his agent, Scott Boras.

The two parties eventually agreed to a six-year, $52 million contract, which only inflated the level of expectations for the Japanese superstar.

This Day In 2007: Daisuke Matsuzaka makes MLB debut after Red Sox spends $103.1 million on his contract and paying off his Japanese team. Price boosted his “Gyroball” that no one could hit. Was all made up. Red Sox wound up paying him more than $2M per win over six seasons. pic.twitter.com/p5Vwww0QjE

And for the first two seasons, “Dice-K” was everything Boston could have hoped for.

Although he posted a subpar 4.40 ERA, Matsuzaka set a Red Sox rookie record with 201 strikeouts in his first season.

He also played an integral role in Boston’s 2007 championship team over the Colorado Rockies.

Matsuzaka made history by becoming the first Japanese-born player to start and win a World Series game.

Despite a brief stint on the DL, he still finished fourth in the Cy Young voting

Instead of taking the offseason to recover, Matsuzaka once again decided to represent Team Japan in the 2009 WBC.

He won MVP in dominant fashion for the second consecutive time and led Japan to another title.

However, he was severely hampered by his heavy workload by the time the regular season came around.

The Red Sox placed him on the DL on two separate occasions that year, and Matsuzaka was never himself from that point on.

In the final year of his contract, he made a midseason return to the club, but injuries rendered him ineffective.

Boston decided against resigning him in the offseason, so he became a free agent in 2013.

He initially signed a minor league contract with the Cleveland Indians but did not crack the Opening Day roster.

He was eventually released and latched on to the New York Mets later that year.

Matsuzaka pitched as a reliever and a starter for the Mets but never recaptured the magic he had early in his career.

Once in a while, though, he flashed the nasty repertoire that made him such a coveted player.

In his final season in the MLB, Matsuzaka had a respectable 3.89 ERA in 34 appearances for the Mets.

To continue his professional career, Matsuzaka signed a deal with the Fukuoka Softbank Hawks of the NPB.

His inability to stay healthy allowed him to make only one appearance for the team in three years.

Today, Matsuzaka is still around, pitching for the club that signed him out of high school in 1999.

Even at age 40, Matsuzaka is hopeful he can contribute to the Lions in any capacity.

Though fans in Boston may never forgive him, Matsuzaka will always be a source of pride for his Japanese fans.

Red Sox Reportedly Key In On A Veteran Free Agent