You are here: Home / Sports / What Happened To Carlos Baerga? (Complete Story) 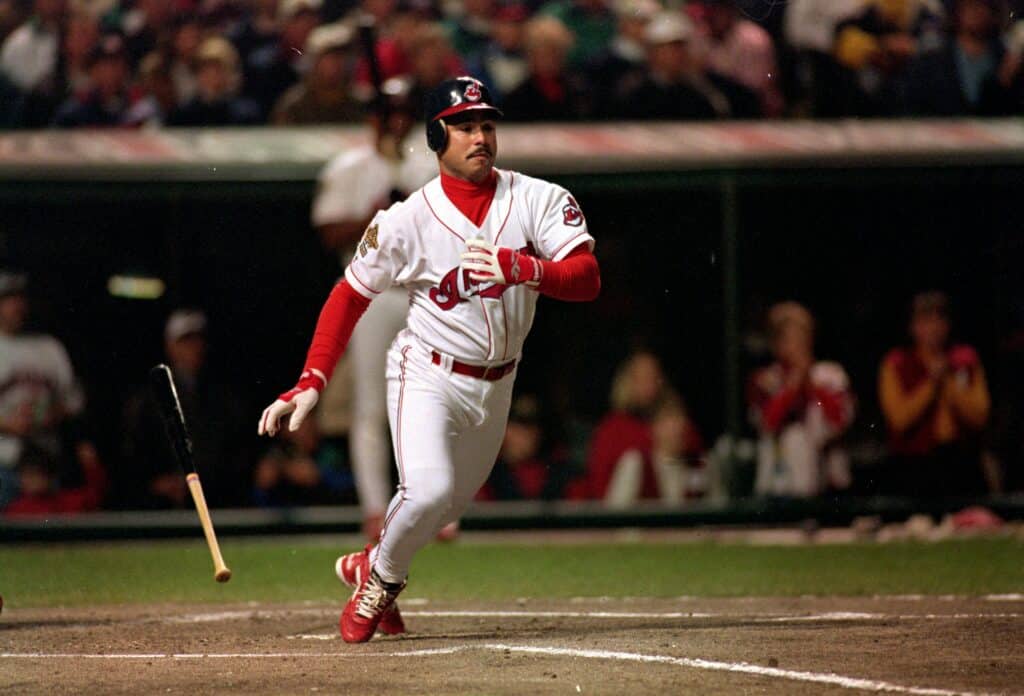 Carlos Baerga showed glimpses of being one of the game’s most consistent contact hitting second baseman during his time with the Cleveland Guardians.

He was a tough out throughout the early 1990s, consistently posting averages above .300.

However, in an era that saw growing offense, his name is typically forgotten.

His career slowly took a downfall as he developed knee problems that limited his time on the field.

Here is a look at the complete career story of the former second baseman, and where he is today.

Baerga was signed in 1985 by the San Diego Padres as just 16 years old from Puerto Rico.

The next year he traveled to the United States to begin his professional career, being four years younger than the average age at the Single-A level.

Despite this, he still stood out.

In his first season, he hit .270 with seven home runs.

He improved upon this the next season, upping his average to .305.

After a couple more strong seasons in the Minors, Baerga began getting recognition league-wide as a prospect to watch.

He entered the 1990 season ranked as the sport’s 67th best prospect.

This also came with a sudden trade, as he was shipped to Cleveland before the start of the season.

With his new organization, Baerga spent little time in the Minors.

He appeared in just 12 games at the Triple-A level, earning the call up to the big leagues.

In his first season in the Majors, Baerga didn’t experience many struggles.

While these numbers weren’t eye-popping, they put him in a strong spot to develop from there.

He did just this, developing quickly in the following years.

His sophomore campaign was stronger, hitting .288 with 11 home runs as he rotated between second and third for the team.

However, it was 1992 that solidified his spot among the league’s best second basemen.

This was good enough to earn him his first career All-Star appearance, along with an 11th place finish in the MVP voting.

He wasn’t done there, as Baerga followed up with an even better season in 1993.

OTD in 1993, Carlos Baerga became the first player in baseball history to homer from both sides of the plate in the same inning. 🤯 pic.twitter.com/RSfiOadbHr

This made him the first second baseman since Rogers Hornsby in 1922 to post back-to-back seasons with such production.

In these two years, Baerga established himself as a perennial All-Star and one of the sport’s best contact hitters.

He was also a central part of the 1995 Cleveland team that made a World Series run, coming up just short against the Florida Marlins.

Baerga’s ALCS performance helped push the team there, as he hit .400 with a home run in the six-game series.

In 1996, Baerga struggled during the first half of the season as he only hit .267, a far cry from his normal production.

During this time, he got swept into partying and drinking off the field that began harming his play on it.

Before the trade deadline, he was shipped to the New York Mets for a package that included Jeff Kent.

The change of scenery did not help Baerga, as the hit just .193 in 26 games with the Mets.

His average bounced back slightly in his second season with the Mets, up to .281, but he hit just 10 home runs.

This marked the start of a steady decline in his production, as Baerga began falling far from his normal numbers.

After signing with the Padres before the 1999 season, he began developing knee problems that kept him off the field.

He appeared in just 55 total games in that year, bouncing between the Majors and Minors.

With his skills declining on the field, he did not have a spot in the Majors for 2000.

He made his return in 2002, this time with the Boston Red Sox.

This injected some more life into Baerga’s career, as he hit .286 while primarily DHing.

In 2003 he signed with the Arizona Diamondbacks and appeared in 103 games, posting a stellar .343 average as he showed that the hitting skill was still there.

4/17/03 – Carlos Baerga recorded a career-high 7 RBI after a Grand Slam, 2-run homer, and a run-scoring double, in an 11-2 Arizona #DBacks victory over the Colorado Rockies, earning @gehrig38 his first win of the season in a complete game (102 pitches) with 10K. AZ had 16 hits. pic.twitter.com/zhPDZPcRRU

However, his next season was cut short as debilitating knee injuries kept him off the field for extended periods of time.

He spent one more year in the Majors with the Washington Nationals before calling it a career and deciding to retire.

While these are far from bad numbers, they aren’t quite indicative of how strong of a player he was early in his career.

After retiring, Baerga has remained close to the sport.

He spent some time working for ESPN as the Spanish-language broadcaster.

He also helped coach the Puerto Rican national team during the World Baseball Classic, while becoming the owner of a winter league team in his home country.

It was awesome! #WBC2017 pic.twitter.com/DWi6KnPg2Y

In 2013, he was inducted into the Guardians’ team Hall of Fame, later becoming an ambassador for the organization and making various appearances.

One included throwing out the first pitch for Game Two of the 2016 World Series, when the Indians hosted the Chicago Cubs.

While his name and numbers may go hidden in the history of the sport, Cleveland fans will always remember the period where Baerga was at the top of his game.

The Guardians Show Off Jose Ramirez Whenever Possible

Jose Ramirez Is Maintaining A Dominant Stretch In MVP Voting

The Guardians Moved On From A Former Top Prospect