You are here: Home / Sports / MLB / What Happened To Brady Anderson? (Complete Story) 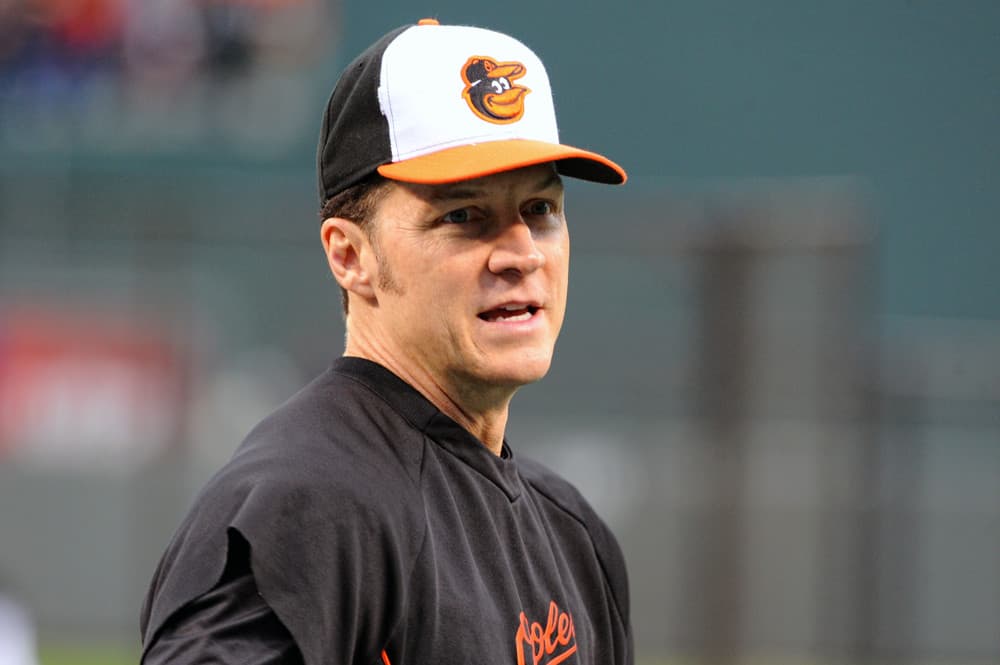 Brady Anderson and his signature sideburns are synonymous with the Baltimore Orioles magic of the 1990s.

Teammates with Hall of Famers “Ironman” Cal Ripken and Mike “Moose” Mussina, Anderson was an Orioles offensive and defensive asset.

Baseball remained a fixture in his life after his playing days.

Let’s take a look at what Brady Anderson has been up to by first recapping his playing days.

Anderson is forever associated with being a Baltimore Oriole, but his career is bookended with a brief early stint with the Boston Red Sox and a final year in MLB as a Cleveland Indian.

Only diehard Brady fans realize that he did not start his career with the Orioles.

He started with the Boston Red Sox in the 1988 season.

Anderson was traded to the Orioles that same year in a package deal that sent Anderson and Curt Schilling to the Orioles in exchange for veteran pitcher Mike Boddicker.

In the 70s and 80s, baseball players were not known for their off-the-field fitness.

That changed in the 90s, and Anderson was among those pushing the envelope of baseball players as athletes who trained their bodies in the offseason beyond trips to the batting cages.

Cal Ripken still calls Brady Anderson the best athlete he ever played with.

The other piece of the 1990s culture change in baseball was the use of performance-enhancing drugs (PEDs); Brady was often loosely accused of PED use.

To this day, he denies using them, and MLB never found sufficient evidence to punish him for it.

Brady Anderson is a member of the Baltimore Orioles Hall of Fame, Class of 2004.

Brady’s biggest career achievements are what put him in the two man 50-50 club with Barry Bonds.


Throughout his career, he was quick on the bases but surged to a career best of 53 stolen bases in 1992.

His strength and fitness helped him in center field and contributed to a long career with relatively few injuries.

Many in Baltimore never wondered where Brady went following his playing days because he held prominent positions in the Orioles front office from 2012-2019.

Brady Anderson won't be back with #orioles next season. Told he's stepping aside with all the new people in the organization and the changes. O's are altering performance/strength and conditioning structure. Will make new hires over the winter.

Brady Anderson in the 1990s brought a Beverly Hills 90210 vibe to the blue-collar city of Baltimore.

He has never been married.

To this day, who he is dating remains a persistent question.

Though he remained largely low-key, he was linked to South African professional tennis player Amanda Coetzer during his playing days.

Currently, he is dating American singer and dancer Kim Bo-kyung also known as Stephanie or Stephanie Kim; she is based in South Korea.

MLB Fans Are Given A Tough Adley Rutschman Question

Graphic Shows Why The Orioles Are So Stacked

Orioles Reliever Is Hungry For More After Stellar Rookie Season

Orioles Remain In Contact With A Top Free Agent Starter

The Future Is Bright For The Orioles

The Orioles Have 2 Young Phenoms To Watch In 2023

MLB Poll Proves How Orioles Changed Their Own Luck

Orioles Make A Puzzling Move After Acquiring A First Baseman