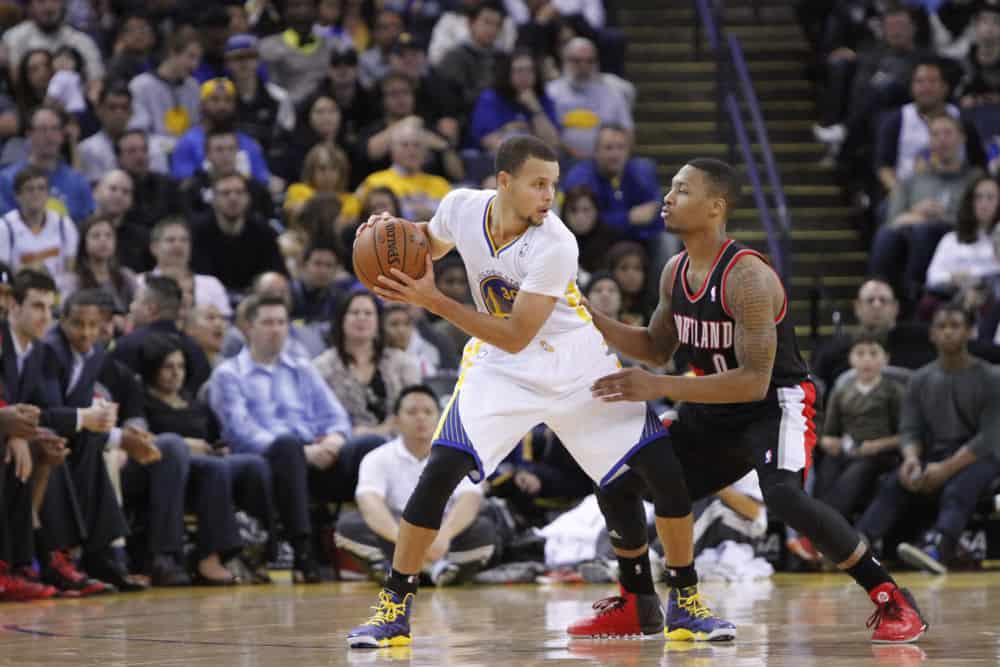 Both guards are great floor generals for their team who display top-level playmaking.

But most importantly, both players display a seemingly limitless range on the court.

Curry single-handedly transformed the way basketball was played with his high-volume shooting.

With Steph being able to shoot from anywhere, teams were forced to go over the top of the screen, giving the Warriors essentially a 5 on 4.

Lillard is just as lethal.

Lillard came into the league just as Curry started to take off and has turned into a deadly shooter himself.

With Steph 11 years into his career and Dame 8 years, it is time to start debating: just which player is better?

Shooting from deep is the first thing most people think about when they hear Curry and Lillard.

Steph is arguably the greatest shooter of all time, but Lillard is not far behind.

Here’s how the two stack up so far through their careers.

While Lillard tops Steph in scoring, the Warrior guard is clearly the superior shooter by the numbers.

Steph is widely considered the greatest shooter of all time for good reason.

Both his abilities to make shots (relative to difficulty) and create his own 3pt shots have been top tier. https://t.co/Rcy3ppAvgj

Outside of last season when he only played 5 games, Curry has never shot worse than 41% from 3.

A club that has only 8 members and includes Larry Bird, Kevin Durant, and Dirk Nowitzki.

He holds the record for most 3-pointers made in NBA Finals history.

Curry is 3rd all-time in made 3-pointers despite playing in nearly half as many games as the two men ahead of him.

He also owns 3 of the top 5 seasons in terms of made 3-pointers.

However, Lillard is no slouch from beyond the arc.

Here are Damian Lillards stats for all his 30+ shots from 14-15, split into 30-34, 35-39 and combined. Regular season, playoffs and combined. #nba #NBATwitter #PortlandTrailBlazers #DamianLillard pic.twitter.com/zunjXWDsNr

Dame is 20th all-time in terms of made 3-pointers and just made the 12th most 3-pointers ever in a single season.

Lillard also finished up a season that saw him shoot a ridiculous 125 shots from beyond 30′ and make 53 of them – good for 42%.

Steph has only attempted 136 shots from outside of 30′ in his entire career.

Even considering Lillard’s historic season from deep in 2019-2020, Steph still holds the advantage as a shooter.

Both guards consistently average greater than 20 PPG year-in and year-out.

They compliment a lethal game from deep with an uncanny ability to finish around the rim.

Lillard has never averaged fewer than 19 PPG and that happened his rookie year.

Dame Dolla is tied for 8th all-time for most 50-point games with 11 in his career, which leads the Trail Blazer franchise.

With the Blazers decimated by injuries last year and playing below expectations, Lillard went on a historic 6 game run.

His 154 points are the most any player has scored in their final three games of a season.

He is also the first player in NBA history to end the regular season with 3 straight 40-point games. pic.twitter.com/SPIdWKPN2x

He concluded the season averaging a career-high 30 PPG.

He has done so with a shot selection that would make your grandfather furious.

His ability to score from anywhere on the court has allowed him to score with ease in some games.

Curry also had one of the most efficient scoring seasons ever in 2015-2016.

All of this while averaging only 34 MPG – good for 26th in the league.

Both players are some of the best scoring guards of all-time.

Their scoring ability from all 3 levels on the court allows them to take over games.

It is hard to give either player an advantage in this category.

As is the case with all player debates, one has to consider awards and titles won.

This is the category where Steph holds a distinct advantage.

Lillard has put together a respectable trophy case.

A former ROY, 5x All-Star, and 5x All-NBA selection who has finished in the top-10 in MVP voting on 4 occasions.

Damian’s awards pale in comparison to what Steph has assembled.

Stephen Curry’s playoff record against some of nba star players

without KD he still has a winning record against all of them pic.twitter.com/FX8aCIqRxN

While accolades do not tell the whole story, they are meaningful.

Lillard has never reached an NBA Finals and has only made a WCF once in his career.

He has had plenty of memorable playoff moments but has yet to have that career-defining moment in the playoffs.

Only behind Damian Lillard’s 36-footer vs. the Thunder last year: pic.twitter.com/5NSWOrD6A3

When taking into account stats and accolades, it seems clear that Steph Curry is the better player of the two.

Lillard has closed the gap in the past 2 seasons but has not done enough to overtake Steph.

2 NBA Teams That Had A Great November

1 NBA Player That Is Quietly Having A Great Season

One NBA Team Is Consistently Leading The West

2 NBA Teams That Had A Bad November

The Usual Suspects Are Currently Leading The NBA

The Celtics Are Scoring More Than They Have In Decades

The Celtics Stay Committed To A Beloved Big Man

The Clippers Are Hanging On Despite A Lack Of Leonard

2 NBA Players That Need To Be Traded At The Deadline

Is Steph Curry On His Way To Another MVP This Season?

Luka Doncic Is Leaving The Rest Of The League Behind

Stephen Curry vs. Damian Lillard: Who's the Better Player?