You are here: Home / Sports / NFL / Should The Raiders Pursue Deshaun Watson In A Trade? 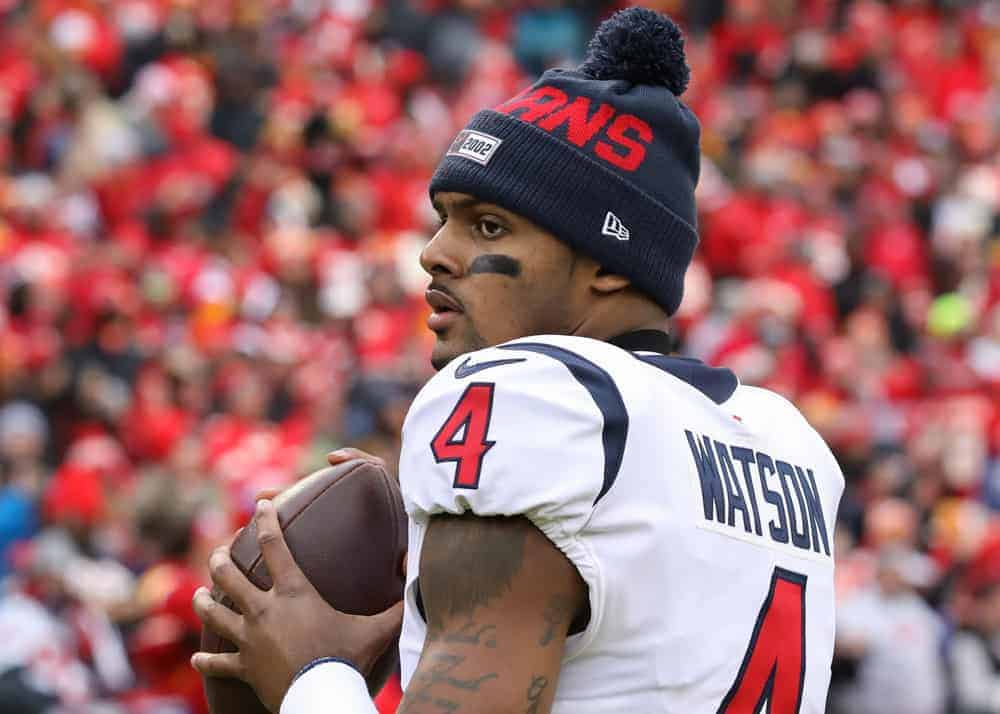 The days continue to pass, and Deshaun Watson remains the starting quarterback for the Houston Texans.

He has voiced his dissatisfaction and indicated he will not play, but the Texans have not budged.

It is not clear what the Texans’ plan is, but the Las Vegas Raiders emerge as an interesting prospect for Deshaun Watson.

Should the Raiders pursue Watson in a trade?

The answer is yes, and here is why.

1. Coach Jon Gruden Has A Love/Hate Relationship With Derek Carr

Depending on the day of the week, Gruden may voice different public opinions about Carr.

It is true that Gruden inherited Carr and would probably love to make waves by getting Watson on his roster.

Gruden has not had the success with the Raiders yet that many hoped would come when he took over as head coach in 2018.

So the .@Raiders GM @MikeMayock says that he & #JonGruden are Happy with @derekcarrqb's record of (19-29) Since Jon has been back with the #Raiders?…NO QUESTION THEY ARE TRYING TO MAKE A DEAL FOR .@deshaunwatson ! pic.twitter.com/CpMCMYqscV

GM Mike Mayock‘s comments this week about Derek Carr should be concerning to Derek Carr fans.

No GM or head coach is happy with a quarterback that delivers a losing record; let’s be clear.

Yes, the Raiders enjoyed some big wins in 2020 over playoff teams like the Kansas City Chiefs and the Cleveland Browns.

Derek Carr is a good quarterback, but he could perhaps be a great quarterback elsewhere.

There is no doubt that Mayock and Gruden have talked about Watson.

Maybe the drawback is that the Raiders’ defense left them down in 2020 so they may want to focus there.

You never know with Gruden; he is a wildcard.

He may think Watson will score more points than his lackluster defense can give up.

2. Watson Is A Good Use Of Raiders’ Draft Picks

On the one hand, giving up of your two first rounders for Watson and shipping Carr out is a lot (and he is clearly not why the Raiders underachieved). On the other, Gruden and Mayock’s track record with draft picks is mixed at best, and Watson is a stud.

The Raiders have not used their draft picks well anyway.

Deshaun Watson is more of a sure bet than any player they likely would get in the upcoming drafts.

In this case, the Raiders really have nothing to lose.

Like most teams in a pandemic year, money and salary cap is an issue.

The Raiders are no exception.

To complement Watson’s skills, the Raiders could sign some free agent offensive weapons on the cheap.

Older free agents who still have football in them but are cap casualties this year are likely choices.

As mentioned above, nobody knows what the Texans will do.

Deshaun Watson could end up sitting out the season as Le’Veon Bell did a few years ago for the Steelers.

If the Texans pursue a trade, several teams are interested.

We have heard rumblings of Carolina and Miami being at the forefront of the interested parties.

However, there would be something strangely fitting about the team now based in Las Vegas getting Watson.

Even though Watson is a huge talent, a blockbuster trade for him is a big gamble for all parties involved.

Las Vegas is a gambling city, and who better to put all of his eggs in one basket than Raiders’ Coach Jon Gruden.

A move like this fits his persona, the team’s image, and their new host city.

The Raiders May Decide For A Full Fresh Start In 2023

Stats Prove Derek Carr Was Not The Problem In Las Vegas

Stat Shows Josh Jacobs Had A Memorable Season In 2022

Derek Carr Had A Historically Bad Second Half

2 Raiders Players That Were Duds On Thursday Night Football

The Raiders Are Making A Point To Get Davante Adams Involved

Should The Raiders Pursue Deshaun Watson In A Trade?