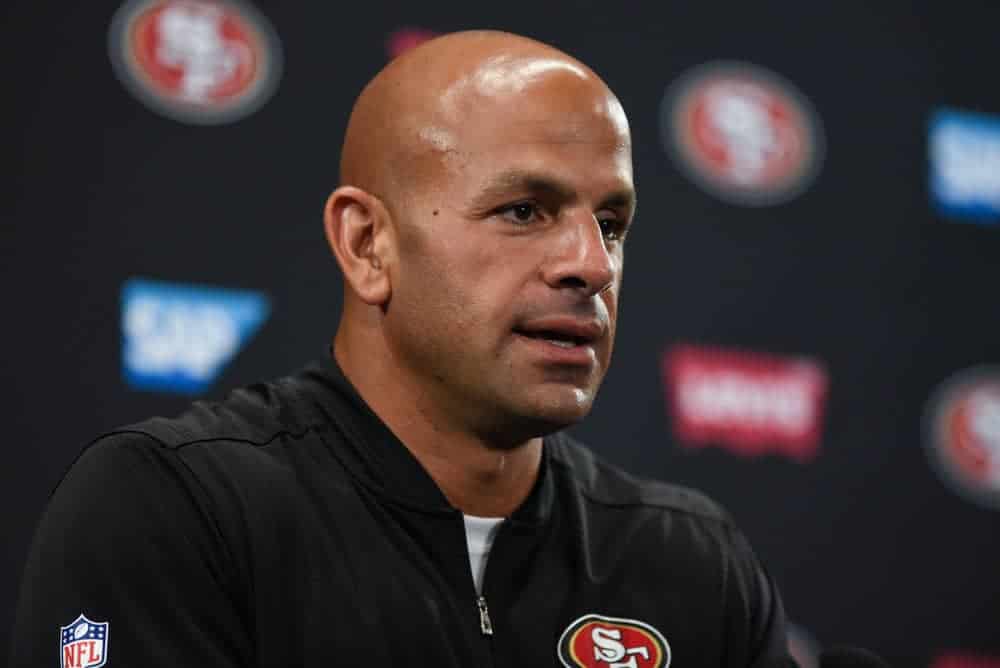 “We are, all of us, creatures of habit.”

Burrows’ thought can not more perfectly describe the history of the Detroit Lions franchise.

The Lions have not been crowned division champions since 1991.

In addition, the team has won only one postseason game since the NFL and AFL merger berthed the Super Bowl in 1967.

As such, it is easy to see how the Lions have been the living example of Burrows’ words above; mediocrity.

The team went 72-87-1 this past decade and suffered a disastrous season with Matt Patricia at the helm in 2019.

As a result, Detroit concluded last year with three wins, 12 losses, and finished last in the NFC North.

It is time for Detroit to begin a new path and rebuild a fresh identity.

The 2021 season is opportune for Lions owner Shelia Ford-Hamp, president Rod Wood, and upper brass to reboot the franchise.

Therefore, it is easy to see why the San Francisco 49ers defensive coordinator Robert Saleh would be the right choice.

Robert Saleh is the leader in the clubhouse for the Lions job, @JayGlazer said on FOX.

Lions Need 49ers Robert Saleh at the Wheel in 2021

The 41-year-old Dearborn, MI, native began his coaching career as a defensive assistant coach with Michigan State and Central Michigan, before heading to Georgia.

While with the Bulldogs, Robert helped the No. 10 ranked SEC Champions to a 10-3 record and 2005 Sugar Bowl bid.

Shortly thereafter, Selah did tours with the Texans, Seahawks, Jaguars, and helped Seattle to its only Super Bowl win in 2014.

After assisting in various roles, the San Francisco 49ers appointed the Northern Michigan alum as their defensive coordinator in 2017.

In 2019, the 49ers were first in hurrying the quarterback at 14.7 percent of the time, while ranked fourth-lowest employing the blitz.

In contrast, the 2019 Detroit Lions were at the bottom in creating pressure and the blitz; eight and eighteen percent.

In spite of being plagued with injuries and COVID-19 related restrictions, the 49ers continue to overcome.

In addition, the 49ers are also playing without safety Jaquiski Tartt and defensive end Ezekiel Ansah.

However, the team is fifth in fewest pass yards, and third in both rush TDs and rushing the passer this year.

Secondly, if the above were not enough to swing the vote in favor of Robert, the following endorsement should be.

The letter urged the Lions to hire 49ers DC Robert Saleh as head coach for the 2020 season.

#49ers’ DC Robert Saleh becoming the next HC of the Lions continues to build steam around the league. pic.twitter.com/K5MeCbSbkV

“We understand the difficulty of these upcoming decisions. As passionate and loyal Lions fans, we are asking you to hire Robert Saleh as the head coach of our team. He is the best candidate for the job and measures as such across every metric. A head coach like Robert can bring us tremendous energy and heart to the franchise and would help us reach peaks that have seemed unobtainable for so long. We have an exceptional opportunity here and we trust you to make the best decision. To turn the corner and become a winning franchise, these next hiring decisions are critical. We hope that you will consider Robert Saleh as the head coach.”

Ms. Ford-Hamp responded that the team would cast a “wide-net” to search for potential candidates, leaving no rocks unturned.

“We’re going to be looking at everything.”

Saleh Remains Focused on the Present

Currently sitting in 4th place in the NFC West, Robert is poised in getting his 49ers into a Wild Card spot.

In a recent interview, the San Francisco defensive coordinator related:

“This league is so week-to-week. We’ve got a team that’s in the middle of the playoff hunt. It’s really a non-issue for me. I don’t talk about it…I don’t have social media. So, it’s probably more for family and friends to enjoy and get a kick out of than it is for me.”

3 NFL Players Who Were Underwhelming In Week 4

3 NFL Teams Who Got Much Needed Wins In Week 4

Should The Lions Hire Robert Saleh As HC In 2021?