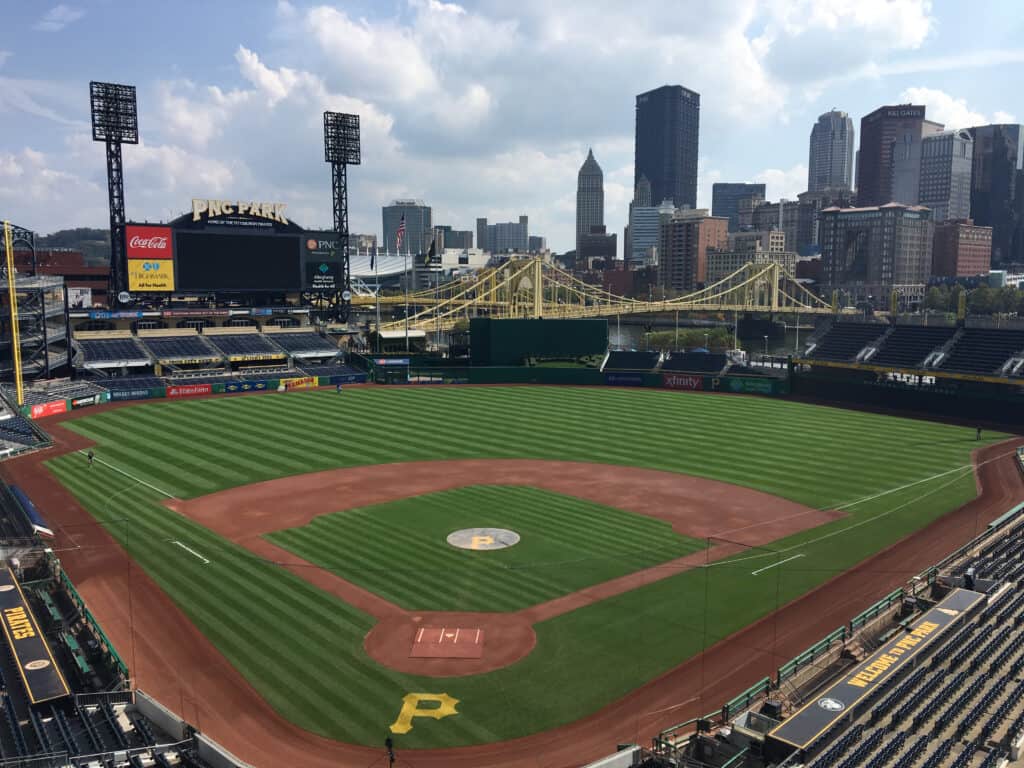 The Pittsburgh Pirates are widely considered to be one of the worst teams in the MLB.

This comes after an abysmal 2020 season that saw them in last place of the NL Central, posting just a 19-41 record.

The team will be in the midst of a rebuilding process that has already started.

They boast the first overall selection for the 2021 draft and will likely have a high selection again next year.

However, the team does have some young talent that is looking to establish themselves at the big-league level this year.

Here is an early look at the Pirates projected 2021 lineup.

If the season started today, here is how the Pirates lineup would look:

Clearly, this group is far from being one of the best offenses in the National League.

However, there are some bright spots.

Hayes is the biggest example of this as he looks to become the undisputed face of the franchise.

The 24-year-old third baseman made his MLB debut last season and exploded onto the scene.

He has been widely considered to be a potential superstar at the hot corner, possessing the potential to be dominant on both sides of the ball.

With 2021 being his first full season, it will be interesting to see how he produces.

Moran has had some production over his five-year career as he looks to take the next step forward.

While Stallings isn’t the most dominant offensive option behind the plate, he has shown some potential as a catcher.

He is an adept fielder that offers some potential at the plate.

In a full 2021 season, he will be able to show whether he can be a consistent producer at the major league level.

Beyond that, the Pirates will not have much to look forward to on offense this season.

They do have solid prospects waiting in the minors, most of whom are still a few years from making their presence known on the Pirates big league club.

In the next couple of years, the Pirates will likely have one of the strongest position player cores of any team in the MLB.

Second baseman Nick Gonzales was the team’s first round pick in 2019 and has yet to make a professional appearance.

The numbers behind Nick Gonzales back up the hype about him:

However, his dominant college numbers and standout performance in the Cape Cod League suggest that he has a bright future ahead of him.

Oneil Cruz is another significant prospect that has sky-high potential.

The 6-foot-7 Cruz is a shortstop for now but may move to the outfield, with many giving him comparisons to Aaron Judge due to his massive power potential.

It is also likely that the Pirates will land star college pitcher Kumar Rocker with the No. 1 overall selection in the 2021 MLB Draft.

This will give the team a potential future ace in their rotation.

After the Pirates traded homegrown arm Jameson Taillon, there is little hope for a dominant performance in their pitching staff this year.

However, they have young talent that will get valuable experience this year.

This is headlined by Mitch Keller, who had a few solid appearances in 2020.

Will Crowe is another young arm who has potential.

He was traded to the team as part of the Josh Bell deal with the Washington Nationals.

2021 is not going to be a pretty year for Pirates fans; it will look very bleak as the team struggles and likely finishes towards the bottom of the league.

However, there is a youth movement underway in the organization as they look to turn their story around.

Oneil Cruz Is Flashing His Power In Another League

Pirates Pass The Time With A Bryan Reynolds Hype Video

Pirates Make A Clear Award Case For A Young Star

Pirates GM Shares A Hopeful Message To The Fans

Oneil Cruz Is Racking Up Historical Marks At A Record Pace

Oneil Cruz Made MLB History With A Single

Pirates Infielder Given A Unique Suspension

Oneil Cruz Makes MLB History With A Throw To First