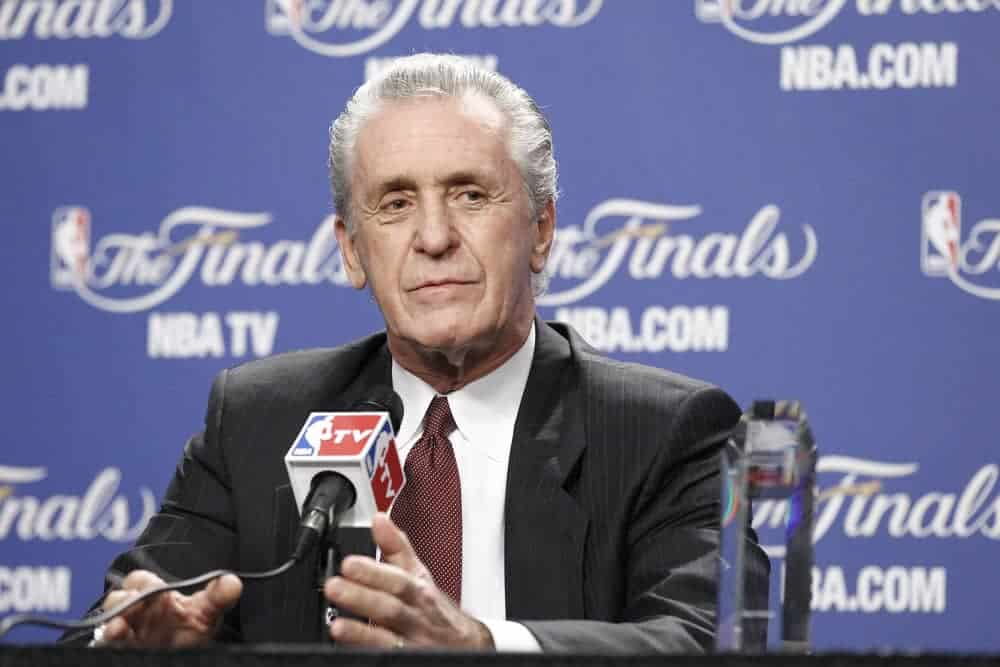 Pat Riley is one of the best coaches in Los Angeles Lakers history.

He is also one of the most well known and well liked presidents in all of the NBA.

Riley, being known for his flashy hairstyle and designer suits in his time with the Los Angeles Lakers — who many referred to as “Showtime” — is a hard worker who wants to get things done the right way in a competitive environment.

After the Miami Heat signed F Jimmy Butler, many around the league felt it would be a perfect marriage as both Riley and Butler exude the meaning of hard work.

But, Riley — hired by the Heat in 1995 as the team president — considered leaving to coach one of the most deadly duos in the entirety of the NBA: Shaq and Kobe.

As Michael Jordan was wrecking havoc on the NBA throughout the 1990’s, the Los Angeles Lakers traded for one of the best players to ever step onto the hardwood, Kobe Bryant.

Riley, who was hired as the president of the Miami Heat coached them at two different times during his tenure.

He helped lead the Heat to their first-ever NBA championship in 2006 with Dwayne Wade and ironically, Shaquille O’Neal.

From the Sun Sentinel’s Ira Winderman:

“We sat and we talked about the team,” Riley says. “And I remember the one conversation that came up and I asked them the question, I said, ‘What about Shaquille and Kobe?’ And they said . . . ”

Riley pauses, as if conjuring the tension of two decades earlier between O’Neal and Kobe Bryant.

“They really didn’t want to talk about it,” he says of the meeting with the since-deceased Lakers owner. “And I said the only way that I could come and coach the team is they give me a chance to put these two back together, to build this relationship and to keep this thing going forward, because I thought with their team, and what they had just accomplished, that they could win more championships together in Los Angeles.

During his team with the team, the Lakers captured 4 NBA Championships.

The Godfather, Lord of the Rings, the Ringmaster. Call him what you want.

The bad beef in this NBA Finals matchup

Not only are two of the most historical cities clashing for a chance to win the Larry O’Brien trophy, but we also have a bunch of enticing storylines to go with it.

During his four year tenure, he won two championships along with Dwayne Wade and Chris Bosh.

When he left, it was reported that there was some friction between him and Riley as Riley was not willing to give LeBron what he wanted.

LeBron James asked “How do you feel about Pat Riley?” pic.twitter.com/wDWJeRPfpI

He was also the recipient of one of the best blocks ever in NBA history during the highly anticipated Game 7 of the 2016 NBA Finals.

Now, Iggy has a chance to get revenge on LeBron.

Lastly, the Los Angeles Lakers were interested in signing Jimmy Butler during the offseason to join forces with LeBron and Anthony Davis.

Butler declined, wanting to be his own man on his own team and we can safely say, it has worked out thus far.