You are here: Home / Sports / NBA / Is Gregg Popovich The Best Best Coach Ever? (Argument) 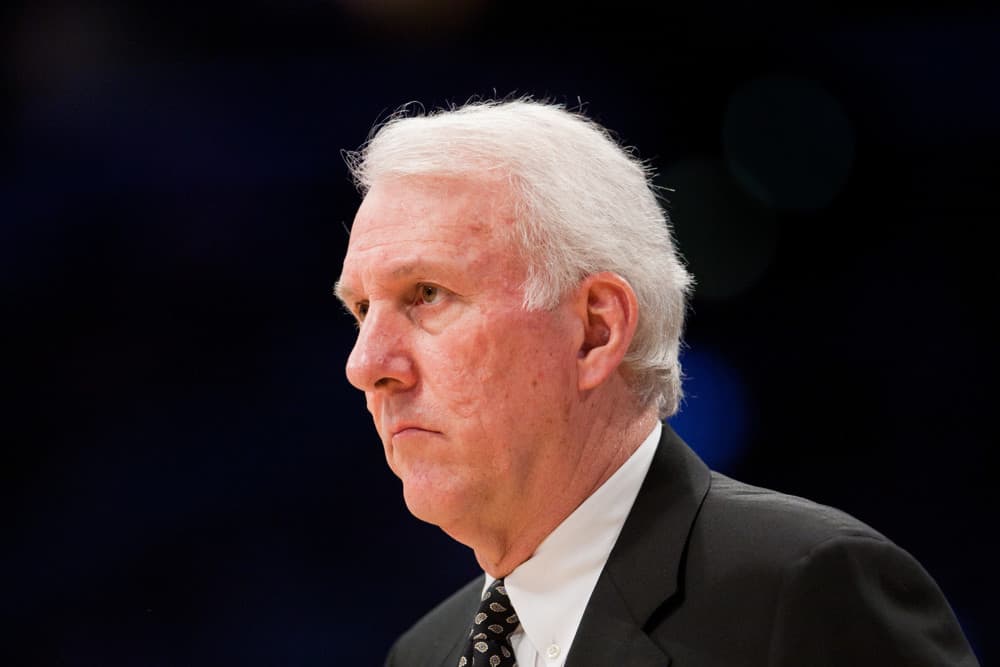 Five years after he announces his retirement, Gregg Popovich will stand before an audience in Springfield, Massachusetts and deliver a genuine, and probably witty, speech as he accepts his admittance into the Naismith Basketball Hall of Fame.

The legendary coach has over 1,200 wins to go along with five NBA championships over 25 seasons, all with the San Antonio Spurs.

Most NBA coaching wins with one franchise, including playoffs:

Popovich is no doubt a top five NBA coach of all time, but where he ranks within those five is up for debate.

Some NBA fans would argue that Pop is the greatest coach the game of basketball has ever seen.

Let’s take a further look into that argument to analyze why Popovich, even as great as he is, is not the best coach the NBA has ever seen.

Popovich’s five championships are an amazing feat, but Phil Jackson, whom many consider to be the best coach in NBA history, has 11.

He won six with the Bulls, the last being during a season that featured a multitude of drama in the front office.

His other five came with the Lakers.

Phil also beats out Pop in the winning percentage category .706 to .674.

He ranks 2nd all-time in winning percentage behind Steve Kerr who has coached in almost 1200 less games.

Kobe Bryant talks about the impact Phil Jackson had on his career.

Jackson’s accomplishments stand alone when discussing the greatest coaches ever in the game.

Pop’s legacy took a little bit of a hit when Kawhi Leonard forced his way out of San Antonio.

The Spurs’ run with Tim Duncan, Manu Ginobli, and Tony Parker was coming to an end leaving the young and promising Leonard to become the team’s go-to star.

Right before the split, Leonard was dealing with a quad injury that he felt was mishandled by the Spurs staff.

He was then even more upset by the lack of empathy from his head coach.

Long story short, Popovich and Leonard did not see eye to eye forcing one of the two to move on in order for the Spurs to move forward as a franchise.

Naturally, the 26-year-old Leonard was the one to leave being traded to Toronto where he would go on to win a championship in 2019.

Known as a player’s coach, Pop’s inability to make it work with Leonard led many to question whether Popovich’s public appearance was genuine.

His biggest competition, Phil Jackson, was known for making it work with the game’s biggest stars. Pop has coached two bonafide stars in his career, Tim Duncan and Kawhi Leonard, and only made it work with one of them.

It’s fair to say that Duncan probably would have gelled with any coach on the planet, so it is hard to give Popovich all the credit there.

Close, But Not Quite

Anyone who wants to argue that Gregg Popovich is the NBA’s greatest coach of all time certainly has a point.

The way he was able to guide the Spurs through their dynasty years was truly impressive considering Tim Duncan was his only true top rated star coming out of college.

Manu Ginobli and Tony Parker were low draft picks that developed under Popovich’s tutelage and became leaders on the floor and in the locker room.

With that being said, his accomplishments are not enough to take the reins from Phil Jackson as the best coach in NBA history.

Spurs Fans Are Humorously Hoping For The Best

The Spurs Were Pure Speed On Wednesday Night

Spurs Star Is Rivaling The Best In The NBA

3 Reasons To Watch The San Antonio Spurs This Season

Tim Duncan Had A Must-See Start To His Legendary Career

NBA Stars Come Together To Discuss A Legendary Move

The Spurs Are Returning To A Historic Venue

The NBA Honors Manu Ginobili On His Birthday

The Spurs Continue To Lead An Important NBA Category

The Spurs Have Finally Committed To A Full Rebuild

The Gregg Popovich Coaching Tree Continues To Take Over

Is Gregg Popovich The Best Best Coach Ever? (Argument)