You are here: Home / Sports / NBA / Philadelphia 76ers Rumors And News (Updated Daily) / Is Doc Rivers Overrated? (3 Reasons Why He Is) 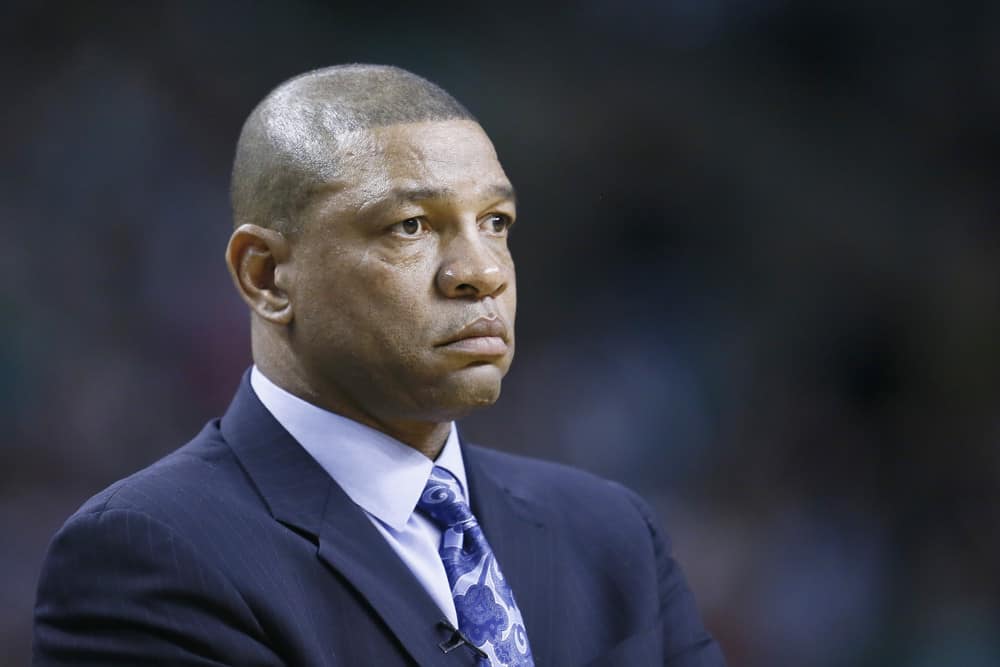 Philadelphia 76ers head coach Doc Rivers has been a staple in the NBA since beginning his coaching career in the 1999-2000 season.

With his 945th career victory, @DocRivers has the 10th most wins among head coaches in NBA history. pic.twitter.com/S9ZAkOtx8W

He is most known for his nine seasons with the Boston Celtics.

Here, he won the 2007-2008 NBA championship as the team formed the first modern super team.

After his time in Boston, Rivers spent seven seasons with the Los Angeles Clippers where the team became a source of critique.

Because of the lack of success from the Clippers in this time, a lot of people began to relook at Rivers as a coach.

Is he actually overrated?

Since winning a championship, he has been seen as one of the NBA’s better coaches.

However, this isn’t actually the case.

Here are three reasons why Rivers is actually overrated.

While Rivers only spent five seasons in Orlando, the Magic were very bad.

This was his very first coaching gig in the NBA, so it is understandable that it would take some time to become better.

However, the team struggled with mediocrity under Rivers.

However, they never won more than 45 games over this stretch.

These teams had some talented rosters as well, bolstered by wing duo Grant Hill and Tracy McGrady.

Over this time, McGrady especially developed himself into one of the NBA’s best scorers after averaging 32.1 PPG in 2002.

However, while the team was solid offensively, they consistently struggled defensively.

Over their first 11 games, the team went an abysmal 1-10 and led to the firing of Rivers.

His failures in Orlando hinted at the idea that Rivers actually struggles at making the most out of a poor situation as a coach.

Unfortunately for him, this would get reinforced even further in Boston.

In his first three years with the Celtics, the franchise did not see much success.

He led the team to an extremely poor 24-58 record during the 2006-2007 season, once again exposing his struggles of putting together a dominant product on the court.

That offseason, the Celtics went out and brought Ray Allen and Kevin Garnett to Boston.

This joined them with established star Paul Pierce to form a strong “big three.”

In their first season together, the Celtics won an NBA championship.

After this, many began viewing Rivers as one of the NBA’s better coaches due to the championship ring.

One of his former players, Glen Davis, reflected on how Rivers got too much credit for their success.

“What Doc had in ’08 was special and he was lucky as hell … Lucky as hell. The year before that they was wearing trash bags … But then the next year they win it, now he is one of the best coaches ever? I’m just not feeling that. You know what I mean? You give credit to KG, you give credit to Paul Pierce, you give credit to Ray Allen. Those are the guys who made sure whatever Doc needed to be done, got done,” said Davis.

It is hard to deny that Rivers was likely the beneficiary of star play from that “big three.”

After they left the Celtics, the team went right back to struggling.

This might be a sign that Rivers isn’t quite as good of a coach as it seems.

While the Clippers always put up solid regular season numbers under Rivers, their playoff runs were nonexistent.

This was a major criticism of the team over this time.

There were a few years that, under Rivers, many thought they had one of the most talented teams in the Western Conference.

While they did run into the Golden State Warriors many times, they struggled to get over the hump.

This was most evident last season.

In the Western Conference semi-finals, the Clippers were up 3-1 over the Denver Nuggets.

With two of the best players in the league between Paul George and Kawhi Leonard, the team blew their series lead.

There was a lot of blame placed on Rivers because of this and rightfully so.

He once again proved an inability to lead in tough situations.

Yet again, this proved to be another example of how Doc Rivers is overrated.

While he isn’t necessarily a terrible coach, he seems to just lack the ability to take a team above and beyond.

He has been the product of star players over his career.

Now, with the 76ers, he is in another role with a talented roster.

However, if he can prove that he can lead the team to a successful season, he can start to shift that narrative.

The 76ers Fell Apart On Monday

Is Doc Rivers Overrated? (3 Reasons Why He Is)