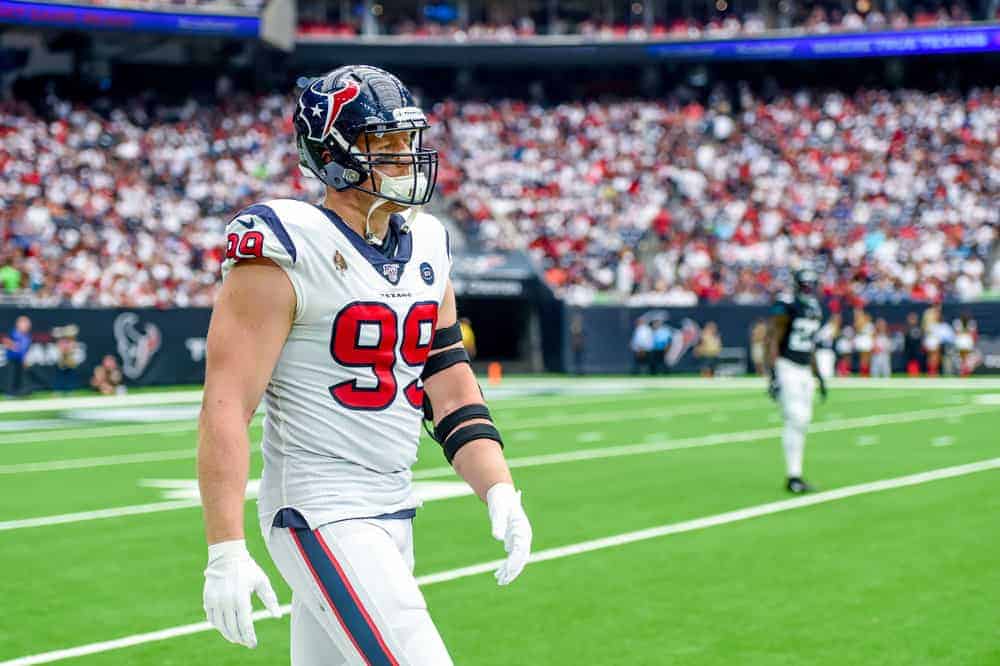 J.J. Watt has been one of the biggest names in football since he stepped foot in the league.

Watt has been the face of the Houston Texans since they drafted him 11th overall in 2011, but he just decided they aren’t cutting it.

As Houston’s star defensive end, J.J. Watt revealed that he has been very disappointed with almost every aspect of his team, especially recently:

Soon after the comment, in the same interview, Watt added:

The future Hall of Famer has almost every trophy you can earn as an NFL player:

There’s one trophy he is missing and it happens to be the most important one, The Vince Lombardi.

Watt and the Texans have never even made it to the Conference Championship.

When healthy, he is one of the best players in the league, already ranking 31st all-time in career sacks with 101, but Watt’s performance might not even be his most valuable asset anymore.

Watt is the 5th most followed NFL player across all social media platforms, having one of the biggest individual fan bases in the NFL.

No doubt Watt is trying to chase the last trophy for his case, and there are plenty of teams who would benefit from having him on the roster.

It seems like there's a good chance that both JJ Watt and Deshaun Watson won't be on the Texans' roster next season. https://t.co/HbjzHKtfby

Let’s look at 3 of my favorite landing spots for J.J. Watt.

This rumor is kicked around more than any other, as the Steelers are contenders, and J.J. Watt’s little brother, T.J. Watt, is a member of the team.

It may not be as obvious as it seems.

The Steelers are set to be negative $20 million in cap space this off-season.

With Pittsburgh having quite a few players they need to re-sign this off-season, as well as Watt being owed $17.5 million next season, he seems to be more of a luxury than a need.

Keep in mind, the 6-time Super Bowl Champions would also have to give up valuable draft picks to obtain Watt.

The Steelers are serious contenders, and I think they should use their picks and cap space (as little as it is) on getting over the hump to forming a Super Bowl roster.

With all of this being said, Watt could still add a lot of value to the team.

The Steelers have one of the youngest defenses in the NFL with an average age of 26 years old.

Watt could help lead this young defense and fill some holes the Steelers might be missing next year.

Bud Dupree, who has racked up 19.5 sacks for the team over the last two years, is set to become a free agent this off-season.

Although everyone would love to see this happen, I don’t think it’s the smartest move for Pittsburgh.

Who knows though, crazier things have happened.

The Green Bay Packers are even more serious contenders than the Steelers.

On top of that, Watt is from Wisconsin and went to college there as well.

The Packers’ cap space situation seems to be about the same as the Steelers, being around negative $20 million in the hole, but they still need a lot of pass-rushing help.

Za’Darius Smith racked up 12.5 sacks while no one else on the team could even achieve 5.

Here is the final look at the 2020 regular season Defensive QB Hits vs. Plays Run.

Watt could go to Green Bay, help the team improve their roster while growing his brand on a bigger team, and chase a Super Bowl.

We have already seen the Packers make a move like this before with superstar defensive end Reggie White in 1993 after he made a name for himself in Philadelphia.

White would go on to win a Super Bowl with the team in 1997.

The Dallas Cowboys are the biggest team in American sports as far as social media followers and revenue.

Watt could grow his brand exponentially while also bringing even more attention to the already popular football team.

Also, if you look at the chart above, the Cowboys are the worst of the three teams in defensive pressures.

Dallas isn’t just the worst of the three teams on this list, they are one of the worst in the league.

The Cowboys were ranked 28th in ESPN’s pass rush win rate, with only 37% success.

With Demarcus Lawrence and Randy Gregory in the rotation next season, the addition of Watt could be exactly what this defensive lines needs.

On top of that, the team is possibly losing their #2 sack leader in Aldon Smith this off-season.

Watt could also help be a positive locker room influence and a leader on the field for this team.

The 5-time Super Bowl champions are also closer to being contenders than it might seem.

Dak Prescott was out most of the season, and Dallas’ offensive line was in shambles.

With a healthy off-season, a decent draft, and the right moves in free agency, this team could be deep in the playoffs this time next year.

Watt could do all of this without leaving Texas, and benefit enormously from being a part of America’s team.

The Texans Are Interviewing A Rising HC Candidate

Texans GM Comments On His Future Status With Team

The Texans Are Joining An Unfortunate Club

The Texans Continue To Hold An Important Mark For 2023

The Texans Have The Fast Track To The No. 1 Overall Pick

The Texans Are Trying Out Davis Mills One Last Time

Texans QB Has A Hilarious Message For Myles Garrett

The Texans Remain Linked To A Star College QB

The Texans Have A Key Advantage In Adding Young Talent