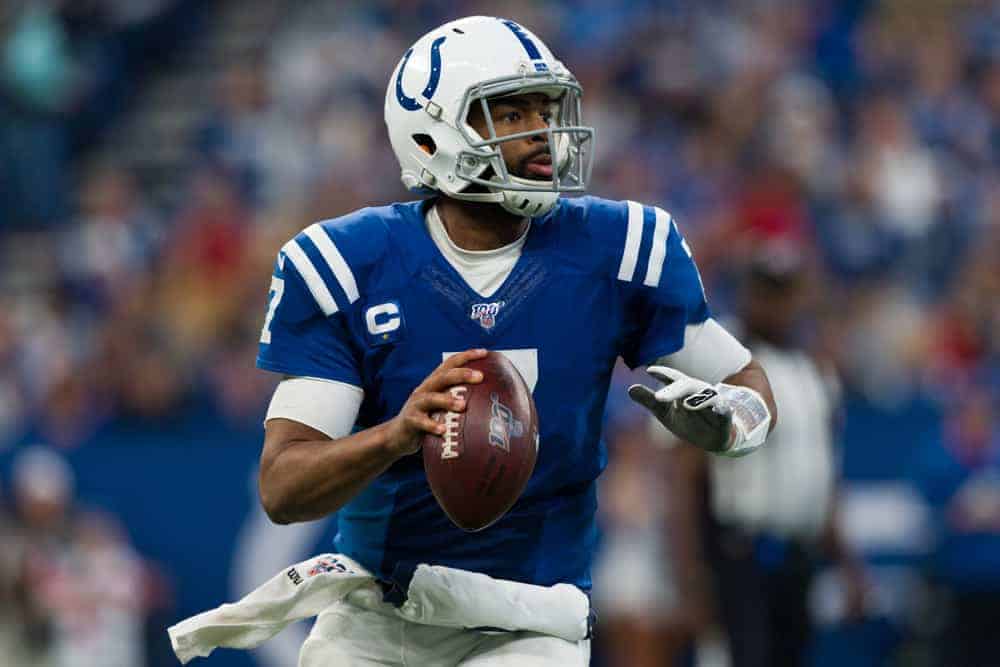 Jacoby Brissett is the poster child for the 2019 Indianapolis Colts team that started strong but faded down the stretch.

Critics jumped all over his second-half performance.

Brissett threw only four touchdowns over his last eight games and had a QBR of 45 over that stretch.

He barely completed half his pass attempts over the last four games.

Indianapolis went 2-6 to end the season short of the playoffs at 7-9.

They say his performance proves he is no more than a backup passer.

The buzz in Indianapolis is all about Philip Rivers coming to the Colts in free agency. General manager Chris Ballard hasn't tipped his hand as far as the team's plans at the position and did praise incumbent Jacoby Brissett in a presser this week sources tell me

But Colts linebacker Darius Leonard is having none of it.

#Colts LB Darius Leonard (38:05) was asked if he’s thought about Philip Rivers being his QB in 2020? The answer on RapSheet + Friends: “No. Why would I do something like that? I believe in Jacoby (Brissett).” Hear Leonard, #LSU WR @JJettas2 & more: https://t.co/Wp9xco8R8U

Leonard Pushes Back on Forgetful Critics

At one point last season, Indianapolis was 5-2 with Brissett at the helm.

He sported a 65% completion rate with 14 touchdowns against 3 interceptions over 7 games.

Brissett was just one week removed fro an AFC Offensive Player of the Week performance heading into Week 8.

He complete 4 of his first 5 passes in Pittsburgh when he went down with a knee injury.

Brissett made it back onto the field for a Week 9 matchup against Jacksonville.

Indy won that game despite Brissett throwing for under 150 yards.

Four losses piled up after that, including the next to Houston with an even poorer statistical game.

Put in Chad Kelly! I can’t take the Jacoby Brissett show anymore in 2019.

Brissett managed to throw for almost 600 yards over the next two weeks.

Tennessee and Tampa Bay each put up over 30 points and Brissett was unable to outscore either.

Indianapolis managed a big Week 16 win over Carolina, but Brissett was not a weapon.

Leonard feels Brissett´s knee might have played a role down the stretch.

But the quarterback wasn´t the only Colt who was hurt.

Indianapolis coaching staff and the players won´t blame injuries for their 7-9 finish.

Instead, they´ll offer the company line that injuries are part of the game and mention the next man up.

But the fact is Indianapolis ended the 2019 season with a banged-up TY Hilton, a promising rookie in Zach Pascal, and four receivers signed during the season.

Colts GM Chris Ballard on Jacoby Brissett and possibly drafting a QB: “Even when Andrew was our quarterback, we still studied the quarterback position.”

Neither Hilton nor Pascal managed to catch 50 passes, although they led the team in receptions.

The other receivers included three wideouts signed off the practice squad and Dontrelle Inman, signed off waivers in December.

That is the rationale Darius Leonard uses when defending Brissett.

“I believe in Jacoby,” Leonard told NFL Network´s Ian Rappaport.  Jacoby is a pretty good quarterback and he showed that early in the season when he had everyone healthy. You can look at any quarterback, when your WRs go down, of course, your numbers go down. But when he had everybody he went 5-2.”

When asked if Brissett was more like the Colts´first-half quarterback than the Brissett we saw in the second half, Leonard doubled down.

Should Indianapolis Give Brissett the Starting Nod in 2020?

Darius Leonard is a good teammate, one that would never throw anyone under the bus.

He might be correct about Brissett´s true abilities being on display over the first 7 games.

However, not everything about those games indicates Brissett is a future franchise quarterback.

Irsay on Brissett: “We’re really opened minded. There’s a lot of ways this could turn. But right now, Jacoby is the starter."

Not a lot of confidence in Brissett from the #Colts GM and owner. pic.twitter.com/5PJEF001rj

Even when he was winning, Brissett was not a prolific passer.

Be barely averaged 220 yards per game during his 5-2 stretch.

He sported a good completion rate that awarded him with a 99.3 passer rating.

But Brissett´s average depth of target was under 8 yards, good for 21st in the NFL.

His receivers gifted Brissett with an 11th-best 5.5 yards after the catch, helping the quarterback´s rating.

2019-20 Jacoby Brissett big-time throw percentage = 2.3% (38th)#Colts offensive ceiling is significantly lowered with a QB who won’t take risks. Was apparent in play-calling from Reich all throughout last season. pic.twitter.com/Oq1kJEyHHa

Brissett´s rate of passes thrown over 20 yards ranked 29th in the 32-team league after Week 7.

His statistical history is one of a game manager, not a franchise quarterback.

Jacoby Brissett´s second half might not be the reason quarterback rumors are swirling at Lucas Field.

A New Frontrunner Has Emerged In Colts' HC Search

Colts Fans May Be Gearing Up For Jeff Saturday Again

The Colts Are Having Trouble Picking A Head Coach

The Colts Have Another Intriguing HC Finalist

One Candidate Is Emerging As A Favorite For Colts' HC Position

Colts Are Bringing In Broncos Coach For A Second Interview

The Colts Made Sure To Conduct An Expected Interview

The Colts Are Interviewing Everyone For Head Coach

Colts GM Comments On His Commitment To A New QB

Colts GM Admits His Faults At An Important Position

Fans Are Still Talking About Matt Ryan Being Benched

Jeff Saturday Is Still Getting Roasted For Last Week's Loss

Darius Leonard On QB Situation: "I Believe In Jacoby Brissett"