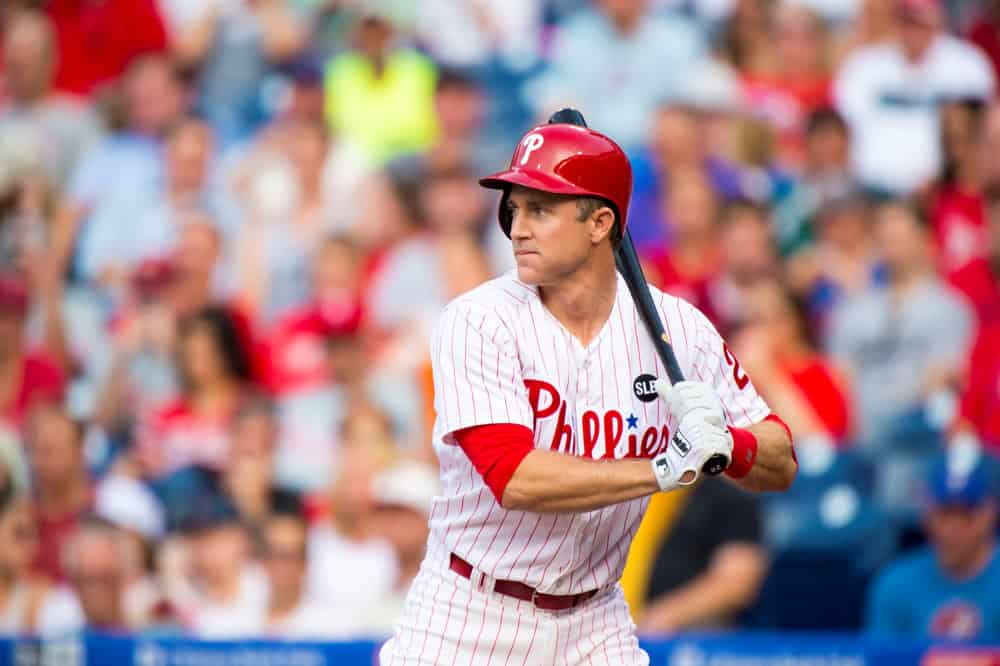 Former Philadelphia Phillies second baseman Chase Utley was one of the best at his position during his time in the league.

At his peak, he was a blend of power and average that few see at second base.

He was also the core of a dominant Phillies team.

Utley was a major reason that they were able to make back-to-back World Series appearances.

Chase Utley, you are the man.

His gritty play style helped drive an offense that was full of firepower.

This helped him quickly develop into a fan favorite.

Here is a look at Utley’s complete career, and where he is today.

The Phillies’ Heart and Soul

Utley was drafted by the Phillies in the first round of the 2000 MLB draft.

He spent just a few seasons in the minor leagues, making his debut in the majors in 2003.

After a couple of lackluster seasons, he emerged as the Phillies starting second baseman in 2005.

This production didn’t drop off, as he followed it up with an even more dominant 2006 season.

In 160 games, he led the league in runs scored and slugged 32 home runs.

On top of this, he hit .309 and earned his first career All-Star appearance.

This started a string of five straight All-Star seasons where he was arguably the league’s best second baseman.

However, he would truly win the hearts of Phillie fans in 2008.

In 2008, Utley continued his stellar play during the regular season.

However, he would help make a statement with the franchise in the playoffs.

The Man being The Man.

Chase Utley with quite a shot in Game 1 of the 2008 NLCS. pic.twitter.com/178sdjwNJf

He helped lead the team to an NL East divisional title and watched as they dominated in the postseason.

They ultimately won a World Series title, defeating the Tampa Bay Rays 4-1 in the series.

This was the franchise’s first championship in 28 years, with Utley etching his name in Phillies history.

He followed the championship season with another successful year in 2009.

Once again, Utley hit 30-plus home runs and led the Phillies to another World Series.

Though they came up short, it was an accomplishment to make it to consecutive fall classics.

This would be the peak of his career, as Utley’s production steadily declined following that year.

He made one more All-Star game with the Phillies in 2014, being traded to the Los Angeles Dodgers the following year.

With the Dodgers, Utley began taking more of a leadership role.

He guided a team full of youth into the playoffs.

However, he would become engrained in criticism after his controversial slide into second against the New York Mets.

In Game 2 of the 2015 NLDS, Utley went hard into the base looking to break up a double play.

He went out of the base path and targeted Mets shortstop Ruben Tejada.

A run scored on the play, but Utley broke Tejada’s leg and ruined his career.

There was a lot of fallout from this, including a two-game suspension given by the MLB to Utley.

While this left a scar on him later in his career, it personified Utley’s older style of play.

His production continued to decline after this until he retired after the 2018 season.

Since retiring, Utley has remained away from the game.

He made the decision to hang up his cleats so he could spend more time with his children.

“There’s a lot about retirement that appeals to me,” Utley said. “Having the ability to make my own schedule has been nice. I’ve been told where to be and what to wear at what time for a long time, so that’s been a nice change. This is the first summer I’ve had in probably 20 years. It’s all new territory to me, but I’ve enjoyed it a lot.”

For someone who was in the sport for so long, it is understandable that he’d want to take a step back.

It is deserved for someone who dedicated himself to the sport and won the hearts of fans.

Now, as Utley continues in retirement, his name will begin garnering Hall of Fame attention.

Though some of his traditional statistics fall short of typical Cooperstown marks, he will still have an interesting debate.

There is a chance that we could see him in the Hall of Fame someday.

J.T. Realmuto Comes Out On Top In Elite Group Of Catchers

Josh Harrison's Agent Put Together A Cool Graphic On Sunday

Former No. 1 Pick Shares Next Stage In MLB Journey

The Top Pitching Prospect In Baseball Belongs To The Phillies

Phillies Not Predicted To Have Much Success Over Next 10 Seasons

Phillies Are Looking At A Hefty Payroll In 2023