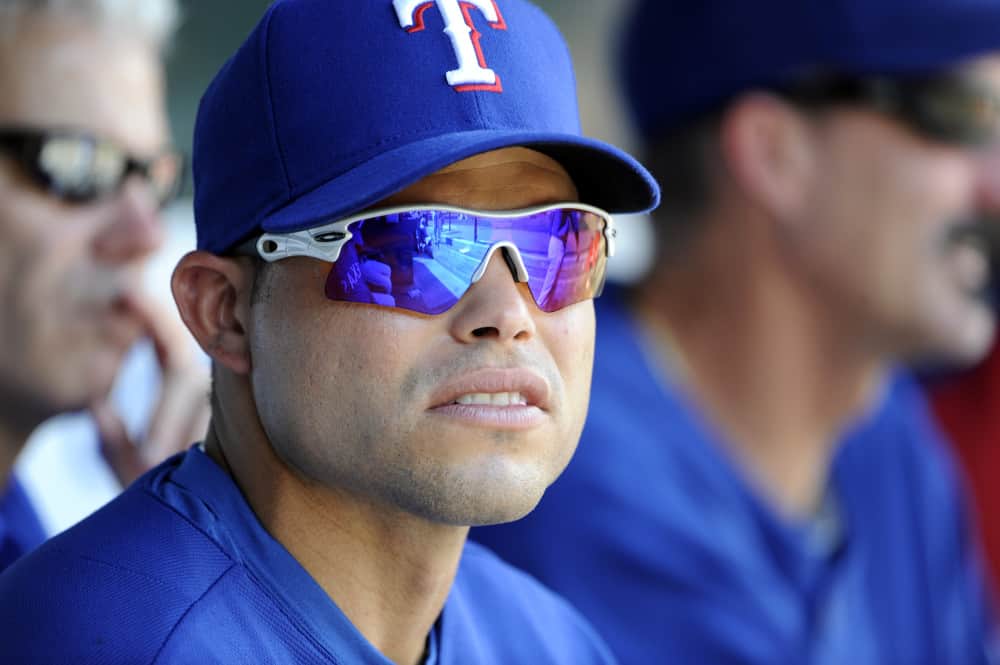 Former Texas Rangers catcher Ivan Rodriguez was one of the greatest catchers that the sport of baseball has ever seen.

He had unprecedented longevity behind the plate, bouncing around the league while still producing at an elite level.

By the end of his career, Rodriguez tallied a staggering 13 Gold Gloves and 2,844 hits, both of which were the most ever by a catcher.

This earned him a spot in the Hall of Fame class of 2017, as he was inducted in his first year of eligibility.

Here is a look into the complete story of Rodriguez’s career and where he is today.

Rodriguez was signed by the Texas Rangers in 1988 at the young age of 16-years-old.

He grew up in Puerto Rico, where he admired the play of Cincinnati Reds catcher Johnny Bench.

This clearly translated into his own play on the field.

On his first day of Spring Training camp after being signed, a Rangers coach began calling him “Pudge”, due to his short and stocky frame.

Ever since then, the nickname stuck.

There was little wasted time before Rodriguez proved this talent, as he went 3-3 in his professional debut.

It was a quick minor league stint for someone that young, as he played less than three full years in the Rangers’ system.

In 1991, he started the season with the Tulsa Drillers in AA, playing in 50 games before being called up to the Major Leagues.

Rodriguez made his MLB debut at just 19-years-old, an astonishing mark at a position that is known for knowledgeable veterans.

He quickly became one of the league’s best.

This performance gave him a spot on the Rangers’ roster for the next season, where he quickly became the best catcher in MLB.

He began to evolve into a perennial 20 home run hitter while allowing stolen bases at the lowest rate in the league.

This culminated to the 1999 season, where Rodriguez had one of the best years from a catcher in MLB history.

Because of these stellar numbers, Rodriguez was named as the American League MVP at the end of the year.

It was the final piece of hardware needed to cement his legacy.

However, his career would not stop there.

After leaving the Rangers following the 2002 season, Rodriguez would find new homes around the league.

In 2003, he became an integral part of the Florida Marlins team that won the World Series.

On this day, Oct 4, 2003. Pudge Rodriguez held on for the final out. Marlins advance to the NLCS pic.twitter.com/9ykeZhi0AT

All the while, he kept playing at a high level.

He was, without a doubt, one of the best catchers in MLB history.

This is where his career begins to get muddied.

Jose Canseco, former player and noted steroid user, alleged in his book that Rodriguez was one of the players who took performance-enhancing drugs.

While the book has been criticized for its refuted claims, it did identify some actual steroid users.

However, Rodriguez never failed a test and never had his name included in any of the major reports.

The controversy continues with his 2004 stint on the Tigers, where he entered camp looking noticeably younger and stronger.

This translated to four renaissance years at a position where age is not a friend.

Regardless, even as the team ramped up steroid testing in 2005 after the book’s release, Rodriguez remained clean.

The damage had already been done by then, and many raised an eyebrow at his career.

Because of this, he went from a surefire first-ballot Hall of Famer to one who squeaked through.

Where Is Rodriguez Now?

Since retiring, Rodriguez has stayed around the game.

Right after announcing his retirement, he re-joined the Rangers organization as a special assistant in 2013.

Here, he served in a variety of roles like international scouting and player instruction.

His knowledge of the game and talent behind the plate offered critical instruction to developing players.

He then joined FOX Sports Southwest as an analyst for pre and postgame coverages.

Along with that, he was elected to the Texas Sports Hall of Fame in 2014.

After being inducted into Cooperstown, the Rangers decided to retire his number seven.

The Rangers did not stop there, as they also honored him with a statue outside their new stadium in 2020.

Outside of baseball, he opened a pizza restaurant in Texas.

The venue is part of a new entertainment district in the City of Arlington backed by the Rangers.

For Rodriguez, the restaurant offers him a chance to greet fans who eat there.

Today, you can still get Rodriguez’s takes on various topics within MLB.

He recently opened up about his frustrations with the sport, specifically with the overuse of analytics.

Rodriguez argued that this has taken the fun out of the sport, as it has become too much of a boom-or-bust style of play.

His interest in today’s league makes sense, especially as his son recently made it to MLB as a pitcher.

Dereck Rodriguez is carrying on the legacy, appearing in games for the San Francisco Giants over the last three seasons.

Dereck Rodriguez has pitched 6+ innings and given up 2 runs or less in his last 8 starts. Yesterday, @DereckrodRF3 tossed another quality start. [powered by @Biofreeze] https://t.co/3oTExNxv2R#SFGiants pic.twitter.com/0WfGc5d6Fs

Now, he has been picked up by the Tigers, his dad’s former team.

However, he has some lofty expectations to live up to.

While steroid allegations placed a dark cloud over Rodriguez, there is no denying how talented he was.

He made it to MLB at 19-years-old and lived up to the hype.

Few others can do this, especially not for a 21-year career.

He was a unique talent that etched his place into the history books as one of the best catchers in the sport’s history.

Ian Kinsler Discusses His New Role With The Rangers

Rangers Welcome Back A Franchise Legend

Rangers Add A Veteran Catcher On A Minor League Deal

Rangers Add A Depth Piece To Their Bullpen

The Rangers Have Quickly Revamped Their Rotation

Is Jacob deGrom Taking A Shot At The Mets With His Comments?

Jacob deGrom Declares His Goal With The Rangers

Does Jacob DeGrom Make The Rangers A Serious Contender?

MLB Insider Details A Surprise Rotation For The Rangers

Rangers Could Be Zeroing In On A Top Pitcher

The Rangers Have A Star-Studded New Leadership Group

Rangers Add An Experienced Voice Next To Bruce Bochy