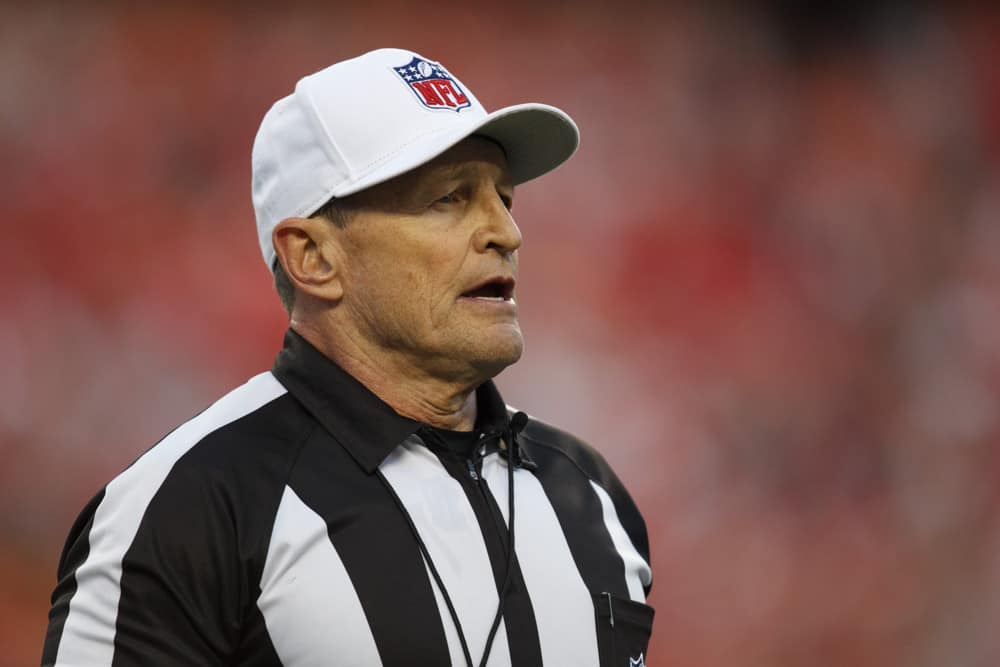 The NFL is one of the toughest leagues to officiate in all of professional sports.

There are penalties that can be called on every play.

Whether that is a subtle hold from an offensive lineman or someone running a fraction of a second before the ball is snapped.

There has not been a single game in NFL history that has been officiated perfectly.

With that being said, there are certain officials that make fans and players alike question how they got the job in the first place.

Here are the 5 worst referees in NFL history.

Triplette is no longer employed by the NFL.

This retirement in 2018 came along with a collective sigh of relief from everyone involved in the NFL.

Before coming into the league, he was a bronze star recipient in the Persian Gulf War.

Triplette went on to have a 22 year career in the NFL.

He began to discuss his retirement in private as soon as 2017.

Some of his worst performances came in his very last year as an official.

In a game against the Buffalo Bills and the Miami Dolphins, after an fight, Triplette ejected a player on the wrong team, who was not on the field, and in fact did not even exist.

This led to a ten minute meeting between the officiating crew trying to figure out what had happened.

We followed this up with awful calls in the Kansas City Chiefs and Tennessee Titans game.

During this game, he was far too eager to blow the whistle.

He called multiple plays dead far before they should have been.

One cutting short a sack that may have led to a forced fumble that could have changed the course of the entire game.

If you ever wondered where the tuck rule came from, it was Coleman.

In a 2002 playoff game, Coleman called for a video review after Oakland Raiders cornerback Charles Woodson knocked the ball out of Tom Brady’s hand that was recovered by the Raiders.

Coleman overturned the ruling on the field and ruled that it was an incomplete pass using the tuck rule as his reasoning.

After this game, NFL owners voted 31-1 in favor of abolishing the tuck rule.

The sole owner that voted against the rule being changed was Robert Kraft, owner of the New England Patriots.

After this, Coleman never officiated another Raiders game in his career.

He went on to retire after officiating the 2019 Pro Bowl.

Walt Coleman to retire at Pro Bowl with streak of not officiating #Raiders game dating back to ‘Tuck Rule’ game https://t.co/Iynvov7W5i pic.twitter.com/ZEbBQD32QG

Hochuli was one of the most liked officials during his time in the league.

Along with this, jokes went around about the size of his arms.

There was not really one specific game in which Hochuli made an awful call that ruined a game.

However, there are certain stats that point to he was not a great official.

One of the biggest stats being that he and his crew led the league in redacted penalties.

This doubting and second guessing of their own calls led to a lot of confusion and frustration from fans and players alike.

Hochuli retired from the league in 2018.

Hussey has two big things that stuck out that he did wrong.

The first stemming from a 2017 game against the Chicago Bears and Green Bay Packers.

A call that Hussey missed in the game led to consideration of discipline from the league.

Bears linebacker Danny Trevathan hit Packers receiver Devante Adams in the head while he was considered a defenseless receiver.

This was a textbook case of targeting and no matter how you feel about the rule, it should have been inforced in this situation.

When asked by the league why there was not an ejection, Hussey said “From my perspective I just didn’t see enough to have it rise to that level”.

The next thing that stuck out is a bit of a contradiction of the first point.

That being he often called way too many penalties.

In 2015 he and his crew led the league in called penalties.

Green is another official who has two major marks on his career.

The first comes from a 2003 game during his time as a back judge.

Green missed that a lineman on the Giants lined up in the wide receiver spot was interfered with during a field goal attempt.

This led to a rule change in which it was announced officiating mechanics would be changed on field goal attempts and last second plays.

The commissioner of the league at the time said it was the most disappointing officiating blunder he had seen.

In a game against the Pittsburgh Steelers and the San Diego Chargers, Green deemed a lateral play the Steelers ran at the end of the game illegal.

After the game, it was deemed as the wrong call.

This led the league to discuss potential administrative improvements for replay that would help prevent mistakes like that from happening in the future.

Josh Allen Is Trolling The Patriots In A Savvy Way

The Packers And Bears Are Fighting For All-Time Supremacy Sunday

Lamar Jackson Continues To Get Good News On The Injury Front

Is Lamar Jackson Worth Being The Highest-Paid QB?

Justin Jefferson Is In A Class By Himself Since 2020