You are here: Home / The Cold Spotlight / Why Do Coaches Wear Headsets? (Explained) 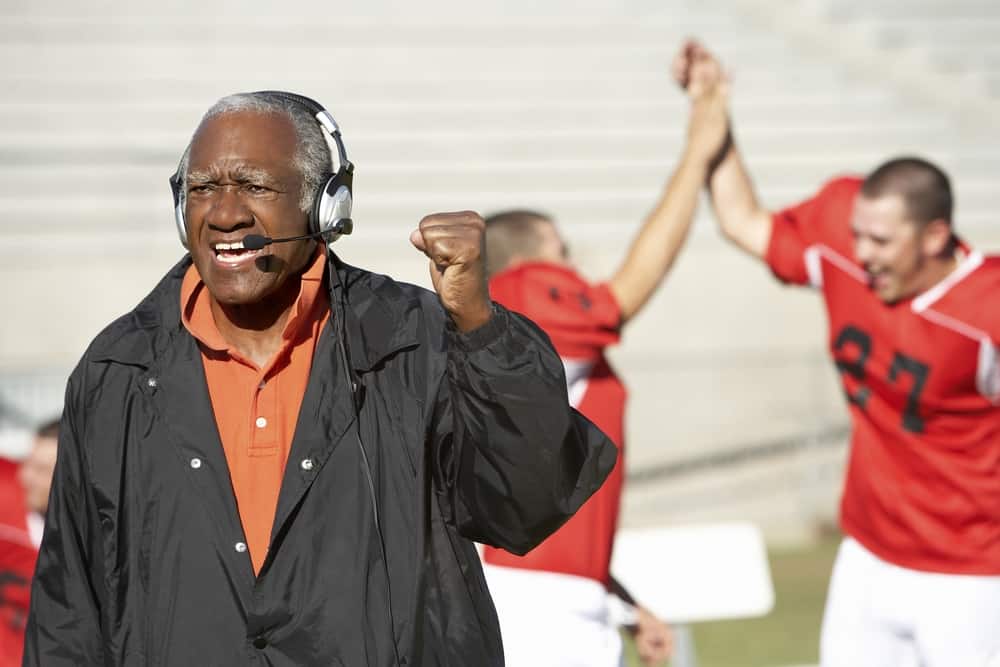 While watching football or other sports, you may notice that the coach is wearing a headset.

You may even spot them speaking into the headset from time to time.

Considering that they have tons of staff members around them, you may wonder what the headset is for and whom they’re speaking to.

You may even wonder if they’re using the headset to speak to the players during the game.

Knowing why coaches are wearing headsets can help you better appreciate the game since you’ll understand what they’re doing when they’re speaking into the headset.

Why Do Coaches Wear Headsets? 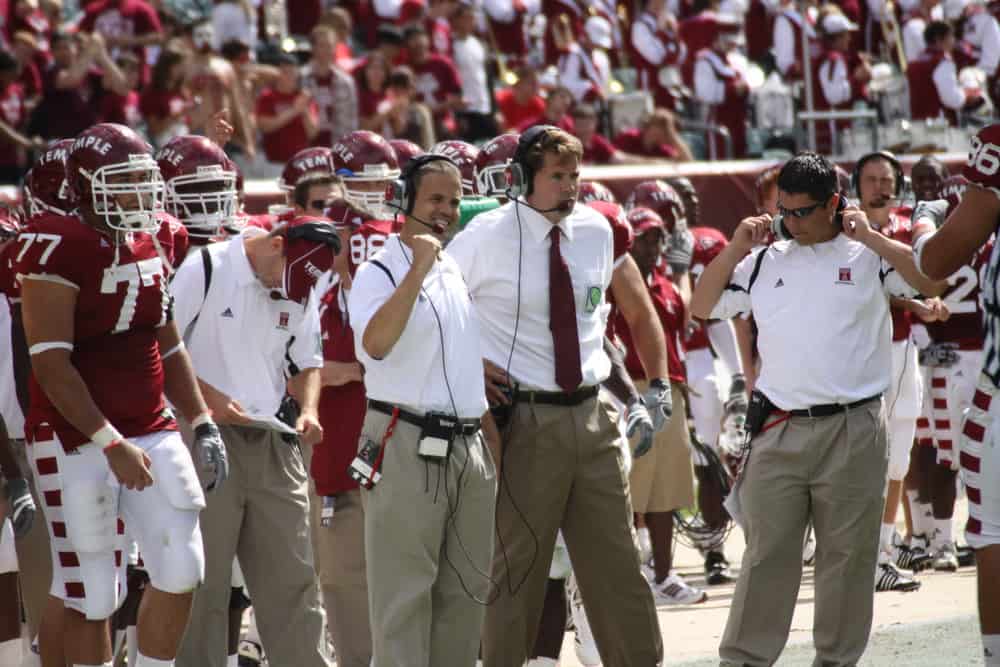 Coaches wear headsets because it allows them to talk to other coaches on the team.

While the head coach tends to receive the most media coverage, he isn’t the only coach on the field.

There are other coaches up in the box who have a unique bird’s eye perspective of the field.

They’re able to tell the head coach about certain formations and whether a player becomes injured.

They can tell if a quarterback is having a problem or if they’re performing well.

They’re then able to relay that information to the head coach via the headset.

From there, the head coach can give the necessary information to his quarterback.

After all, it isn’t just his fellow coaches whom he is in communication with.

Coaches are also able to speak with their quarterback through the headset.

If you see a coach wearing a headset, then it’s because he’s speaking to other coaches and players who aren’t nearby.

When Did Coaches Start Wearing Headsets? 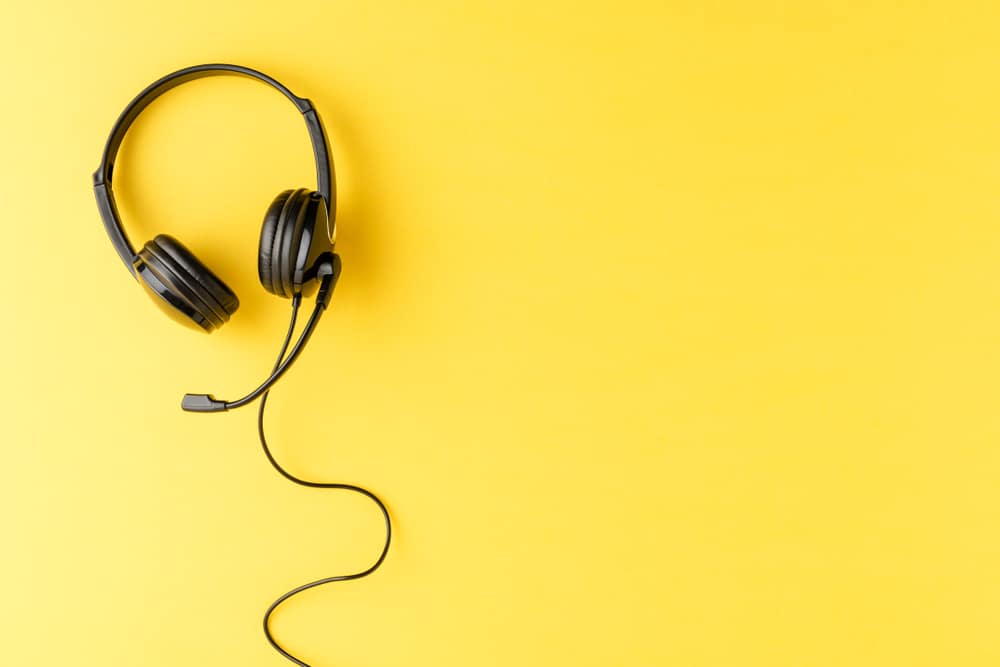 You can trace the root of coach-player communication all the way back to 1956.

The idea came from Ohio inventors.

They designed a radio receiver that allowed the coach to speak to the quarterback.

They secretly put it into the helmet of their quarterback, and the coach was able to impart secret information to him.

Eventually, the NFL discovered this and quickly banned the use of the technology.

They believed that it gave teams an unfair advantage.

They changed their tune in 1994, however.

In 1994, the NFL approved a system that they had more control over.

They quickly came up with rules regarding the use of headsets.

At the time, Motorola made all the headsets and receivers for the NFL.

While headsets used to be banned, they’re now a common feature on the sidelines of any NFL game.

Can Quarterbacks Hear The Coach? 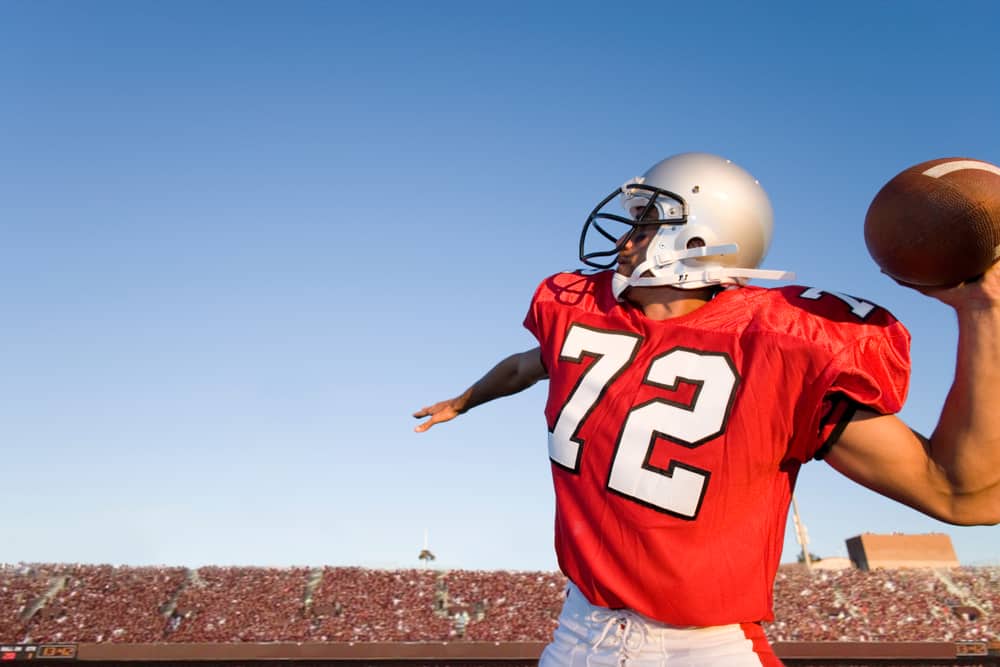 Yes, quarterbacks can hear their coach.

To ensure fair play with the use of headsets on the field, the NFL made a few rules.

One of those rules is that only two players on the field can have a receiver in their helmets.

In most cases, it’s the quarterback on the offense and whoever is leading the defense.

The NFL limits how many players have receivers to ensure the game is still fair.

Because there’s a game clock, most teams have a certain amount of time before they have to put the ball in play.

That means they can’t stand around listening to all the instructions they’re receiving.

If every player had a radio transmission in their helmets, then it could create some confusion.

It’d create chaos which would hold the game up and be unappealing to fans.

As such, only having two players on the field with radio receivers ensures both fair play and more organized play.

Another rule that the NFL instituted was that all talking would stop 15 seconds before the game clock runs down.

Essentially, as soon as the game clock shows that there are 15 seconds left, all communication stops.

This also ensures that one team doesn’t gain an advantage over the other.

If coaches were able to continue to speak with their players all throughout the game, then they could make them aware of open receivers.

That wouldn’t make a very enjoyable game either.

While quarterbacks can hear from their coaches, it is strictly regulated to ensure fair play.

What Are The Benefits Of Coaches Wearing A Headset? 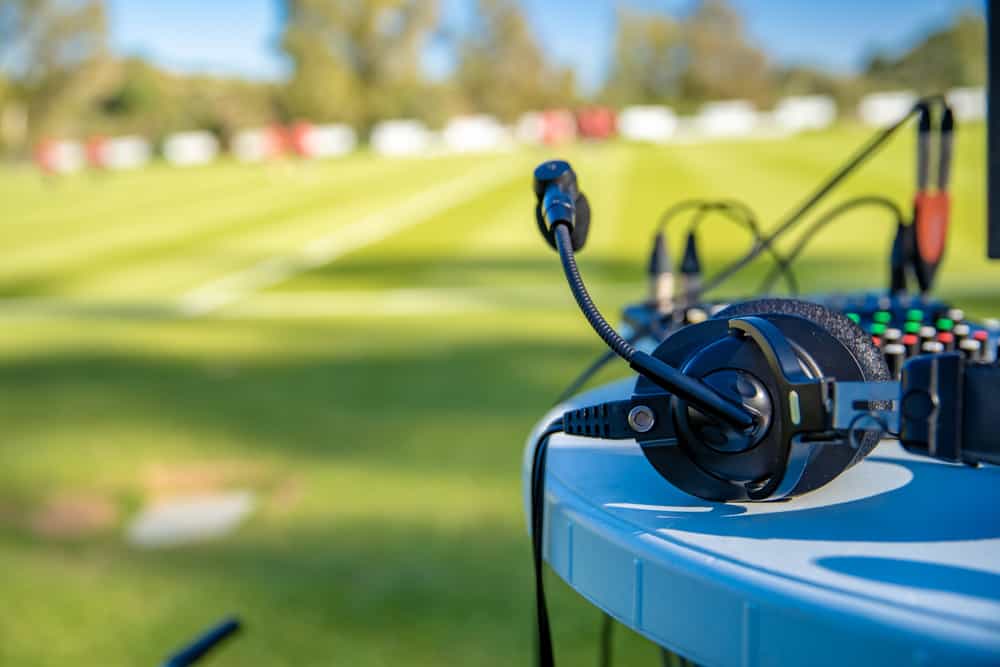 While the NFL finally approved the use of headsets, you may have a few concerns.

The use of headsets on the field has actually helped improve the game in a few ways.

Here are a few benefits of coaches wearing a headset. 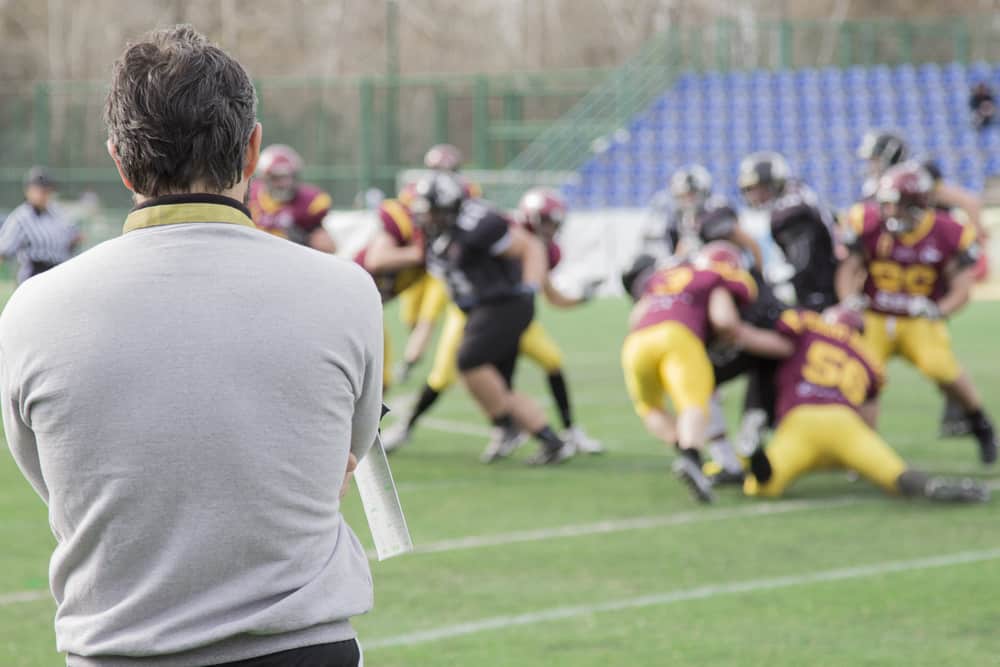 One of the most important benefits of headsets is that they allow the coach to have faster communication with his quarterback.

The head coach can receive rapid information from another coach, then relay that information to the quarterback.

The game doesn’t have to stop so the quarterback can run to the sidelines to see what his coach wants.

Quick conversations can happen inside the helmet instead.

Few people want to see their quarterback running back and forth to their coaches to speak with them.

They want to see the quarterback playing the game.

By allowing headsets, faster communication between the two is now possible which results in a game more focused on the actual action. 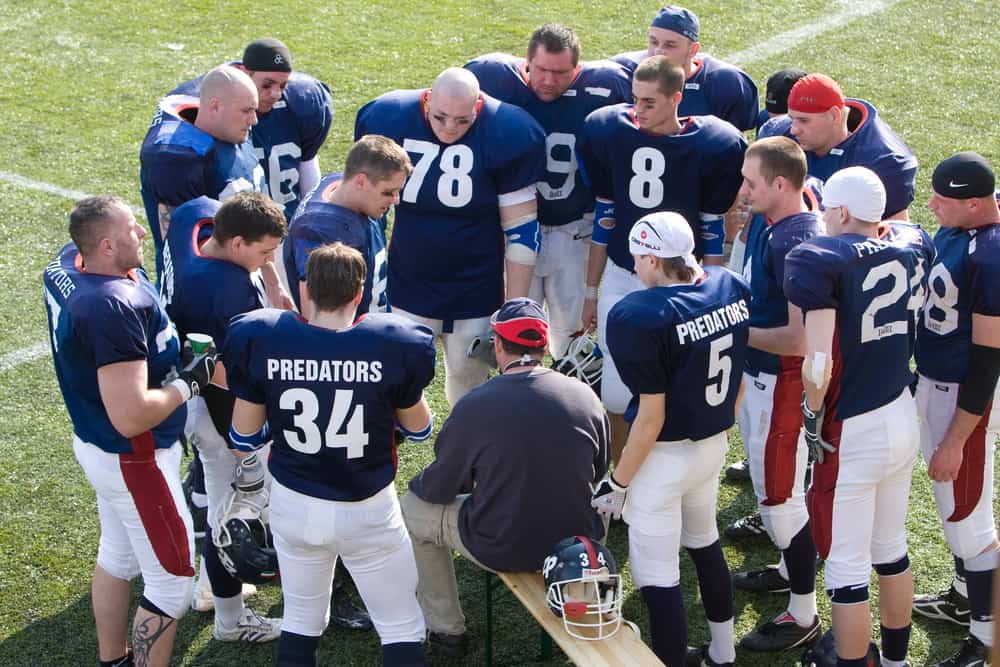 Part of this comes from the coach’s ability to quickly speak with the coaches who are up in the box.

They can tell the coach what they’re seeing which allows the head coach to revise certain plays.

They’re then able to tell the quarterback the updated plan.

The quarterback can run the new play, which might be a better play than what they had intended to run.

It might result in gaining some ground or even a touchdown.

It makes for a more exciting game.

Headsets are beneficial since they can lead to better play calls and better games. 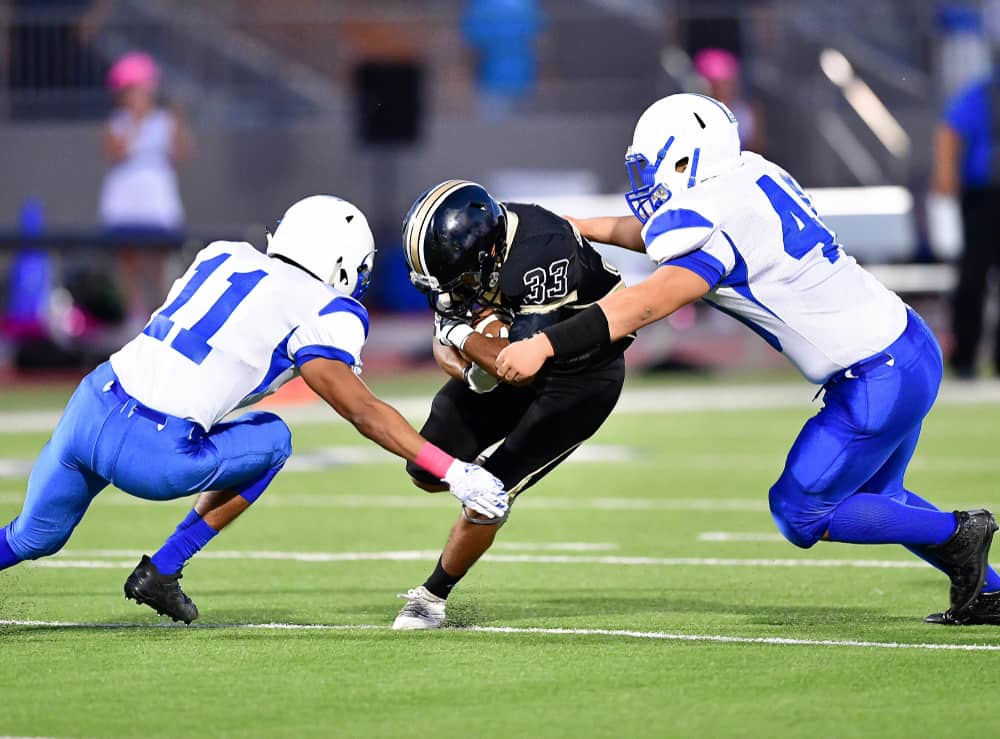 One of the reasons why the NFL decided to allow headsets in the first place is that they wanted to speed the game up.

A problem with football games is that they tend to last a long time.

One of the reasons behind the longer games was that the quarterback would have to run to the coach for instructions.

Football fields are quite large.

The constant back-and-forth eats into the game time.

Headsets allow coaches to quickly tell their quarterbacks what they want from them.

The NFL can now save that time which makes the game more enjoyable to watch. 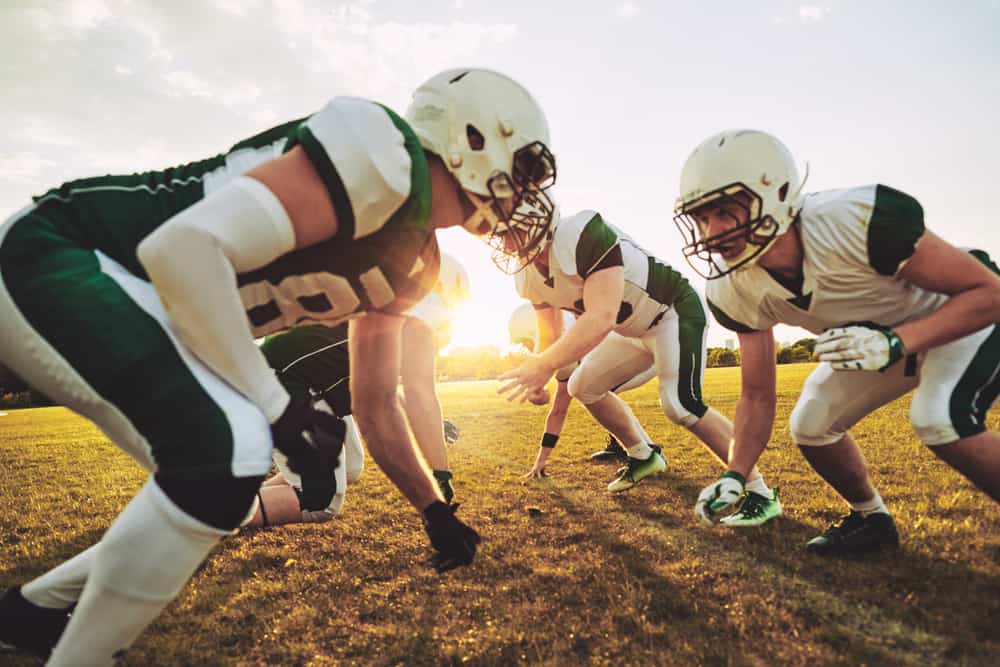 A final reason why wearing headsets is beneficial is that it reduces the risk of spying.

Spying is a real concern in the NFL.

They don’t want lip readers on the other team to know what they’re saying.

Otherwise, they might see what play the coach is calling for.

They’ll then be able to call a defensive play that can shut that down.

Headsets allow coaches to safely instruct quarterbacks and defensive players on what to do next without any risk of spying.

It makes the game fairer and more enjoyable to watch.

Coaches wear headsets to communicate with other coaches and with some players.

The use of headsets is beneficial since it helps speed up gameplay and makes imparting plays less risky.

Despite the benefits of using a headset, they’ve only been legal in the NFL since 1994.

Why Do Coaches Wear Headsets? (Explained)