You are here: Home / The Cold Spotlight / Why Do Coaches Cover Their Mouths? (Explained) 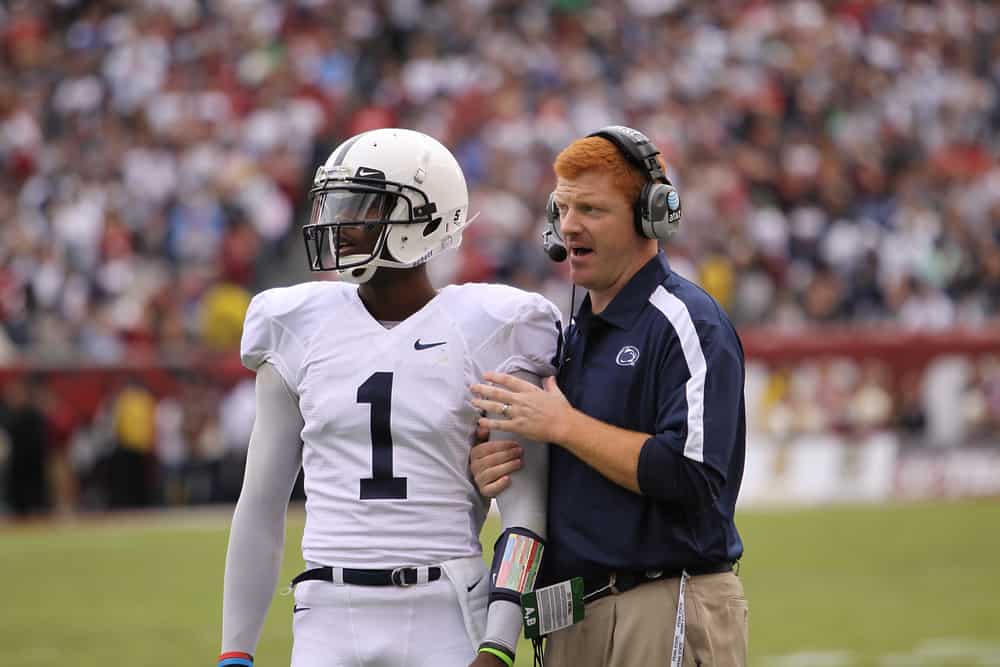 When watching an NFL game on TV, you’ll often find the coach pacing along the sideline.

Coaches can be enjoyable to watch.

They’re either stony-faced and serious or a bundle of nervous energy.

Why do they clearly and deliberately cover their mouths when speaking?

Why Do Coaches Cover Their Mouths? 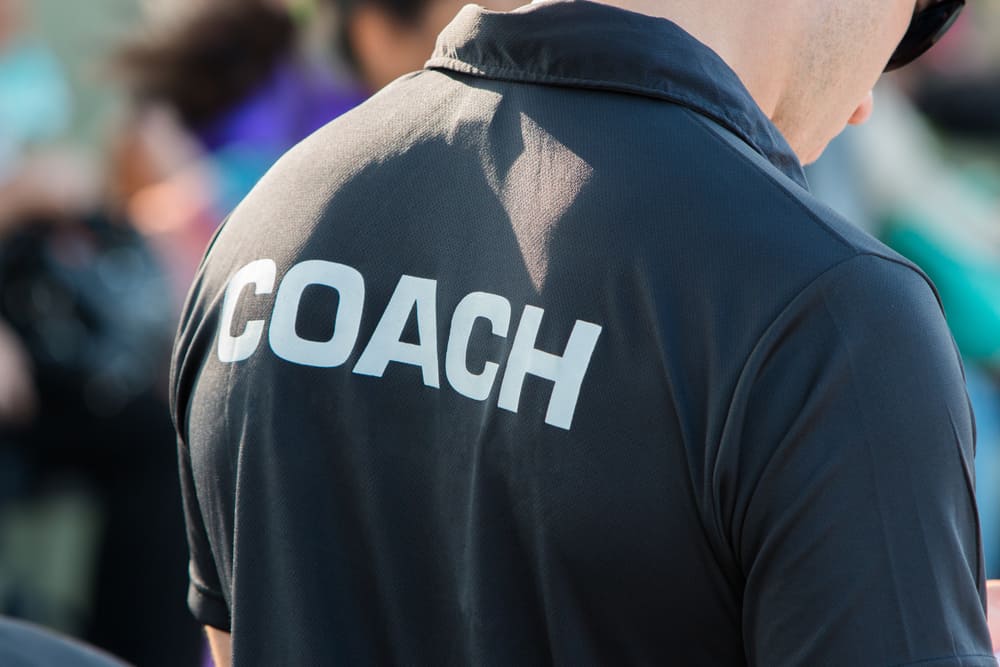 Coaches cover their mouth to ensure the other team doesn’t know what plays they’re discussing.

Espionage is rife in professional sports.

When you know what plays or plans the opposing team has, you can make a play that counteracts that plan.

For example, if you know that the opposing team is going to toss the football to the left, you can have your best players stationed to the left.

It inhibits their ability to get an edge over you.

Instead, you have an edge over them.

Obviously, if a team gets caught spying on another team, dire consequences can occur.

As such, if teams want to spy on each other, it has to be a covert operation.

One of the easiest ways teams used to spy on each other was by reading the coach’s lips.

The coach would tell the play he wanted the team to run, and if the opposing team could read his lips, they’d know what was happening.

To avoid that, coaches these days cover their mouths.

They’ll either use their hands or a piece of paper to ensure their mouths aren’t seen.

This is important because cameras often zoom in on the coach when they’re talking to a player.

A spy at home could call or text the other team to let them know what was coming.

By keeping the camera from also seeing their mouths, the coach can keep the play a secret.

Why Do Coaches Wear Headsets? 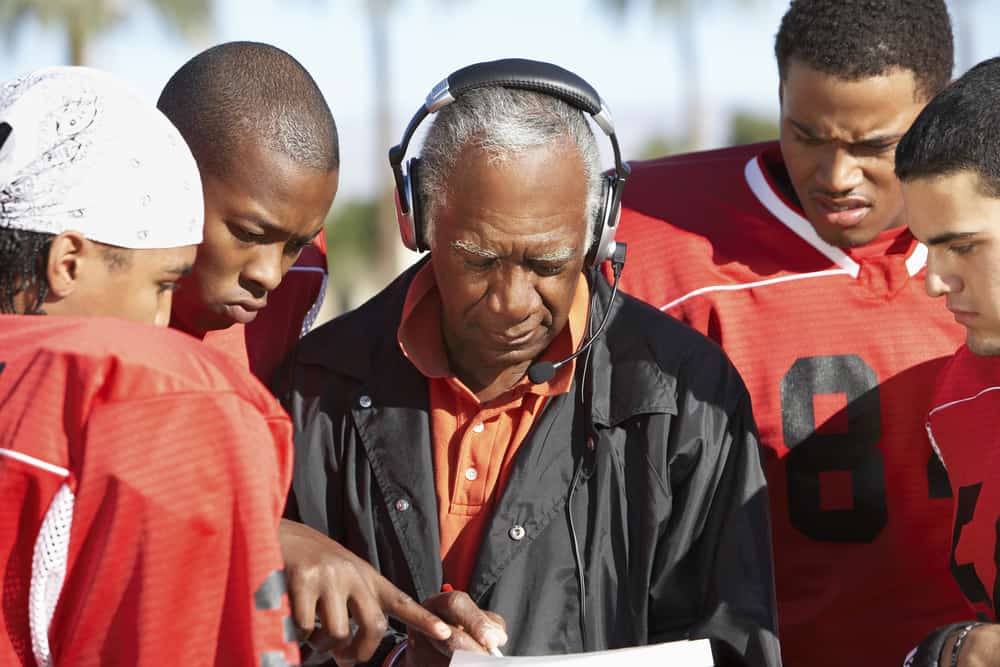 Coaches wear headsets to communicate with other coaches and with their players.

For a long time, radios and headsets were banned in the NFL.

They saw it as a form of cheating.

That changed in the 1990s when the NFL realized that having headsets and radios could help speed up play.

That was and remains an ongoing problem.

Before headsets were in use, players would have to run to the sidelines to receive instructions from their coaches.

If coaches had any last-minute changes, the player would have to run all the way there to hear them, then run back.

It added extra minutes to the clock that didn’t need to be there.

One of the rules that came out of the agreement to use headsets was that the quarterback could only have a receiver.

They would be unable to talk back to the coach.

As for the coach, they could speak to the quarterback and one defensive player who was in charge of the defensive line.

These days, coaches also use their headsets to speak to booth coaches.

Because booth coaches have an aerial view of the field, they’re able to relay information to the coaches on the field.

The coaches on the field can then tell the quarterback what plays they want them to run.

Coaches essentially use headsets to deliver quick information to each other to help speed up play as well as provide an interesting game for audiences.

Do Coaches Talk To Quarterbacks During Play? 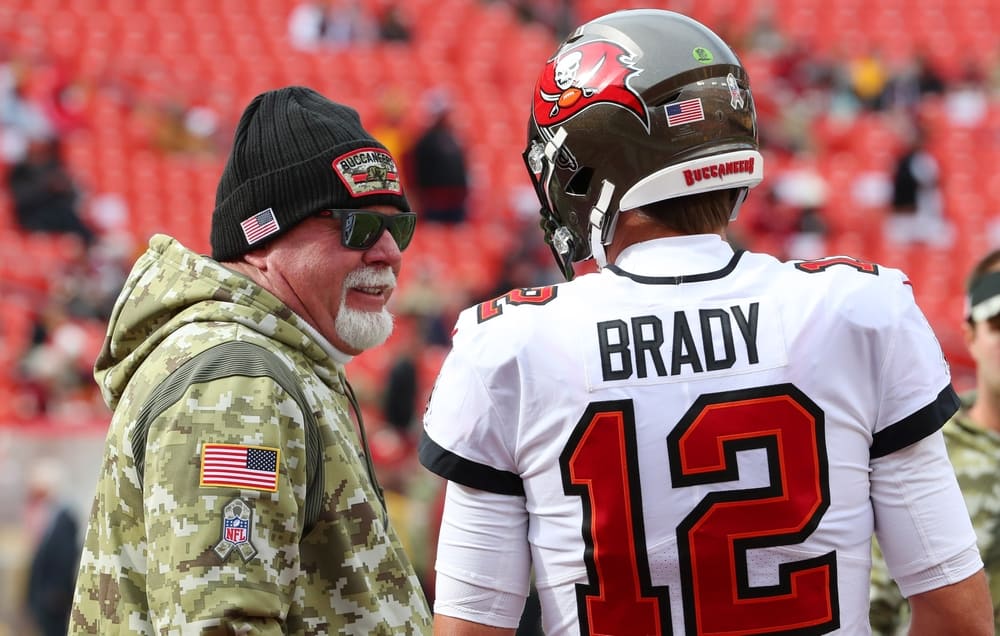 Yes, coaches do talk to quarterbacks during play.

However, once the game clock reads 15 seconds before the play is in motion, all communication gets cut off.

This keeps coaches from being able to tell their quarterbacks to throw to the left instead of right, for example.

Once the game clock reads 15 seconds, it’s up to the players to perform the play as best they can.

If the play doesn’t seem to be panning out, it’s also up to the players to adapt on the spot.

They won’t have their coach talking in their helmet to tell them what to do instead.

This extra rule of headset use ensures that the game stays fair and fun.

If players had coaches telling them what was happening, there would likely be a lot less drama on the field.

Players would have a greater chance of avoiding sacks, for example.

Before 15 seconds, however, the coach can tell the quarterback all kinds of information.

They might tell him to run a certain play or to be aware that one of their players is coming off the field.

You can tell which players have headsets in their helmets by a sticker.

The helmets with headsets have a sticker on the back usually in a noticeable color.

Along with the 15-second rule, there’s also a rule that states that if one team’s headset isn’t working, then the other side can’t use their headsets either.

Otherwise, one team would have an advantage over the other.

If you see a coach speaking into their headset, there’s a good chance it’s because he’s speaking to a player on the field.

Why Do Quarterbacks Tap Their Helmets? 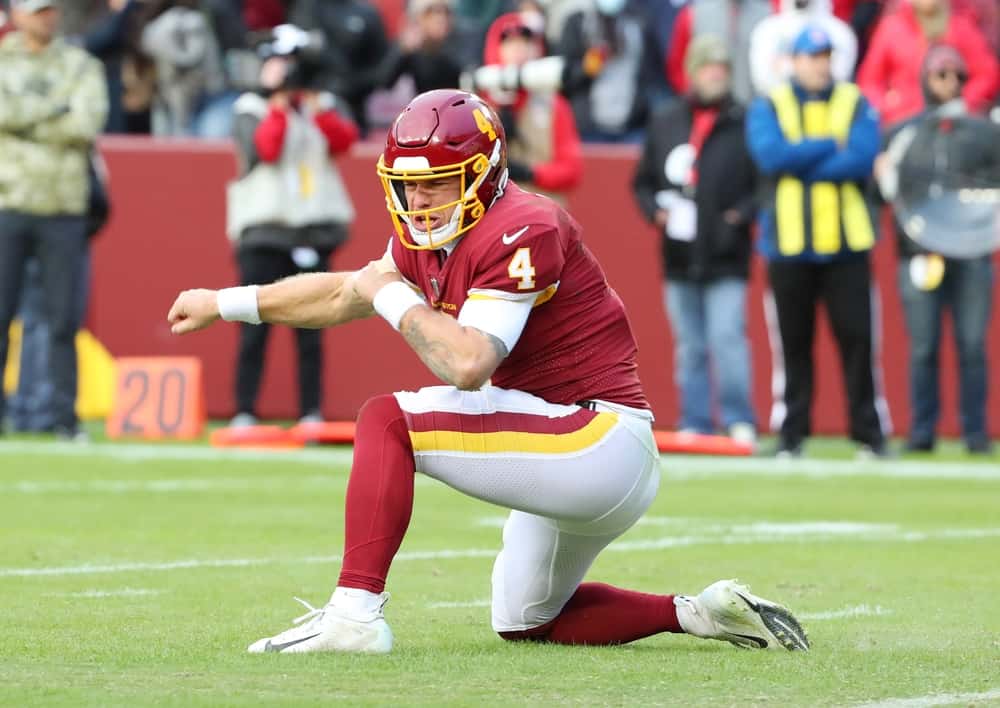 Quarterbacks tap their helmets to make their players aware of something.

This usually occurs when they need to make a change to the play.

They might notice something about the defense, then tap their helmet to signal to the others that they need to speak.

It tells the rest of the team to pay attention.

In many cases, the quarterback will issue a new play.

If they notice that their current play isn’t going to be successful based on the defense’s formation, they might make a quick switch.

Tapping their helmet makes the others aware that something important is happening.

They might also tap their helmets to call out cover.

If they notice that coverage is particularly heavy in one area, they might make their teammates aware of it by tapping their helmets first.

They’ll then shout out some information about the specific coverage area.

Some quarterbacks might also tap their helmets to let the others know they’re getting information from the coach.

Since the coach can speak to them in their helmet, the quarterback may need a moment to listen.

To signal this to the others, they might tap their helmet.

Once they have the information, they’ll let the team know what the plan is.

Quarterbacks tap their helmets to make their team aware.

Why Do Quarterbacks Have A Towel? 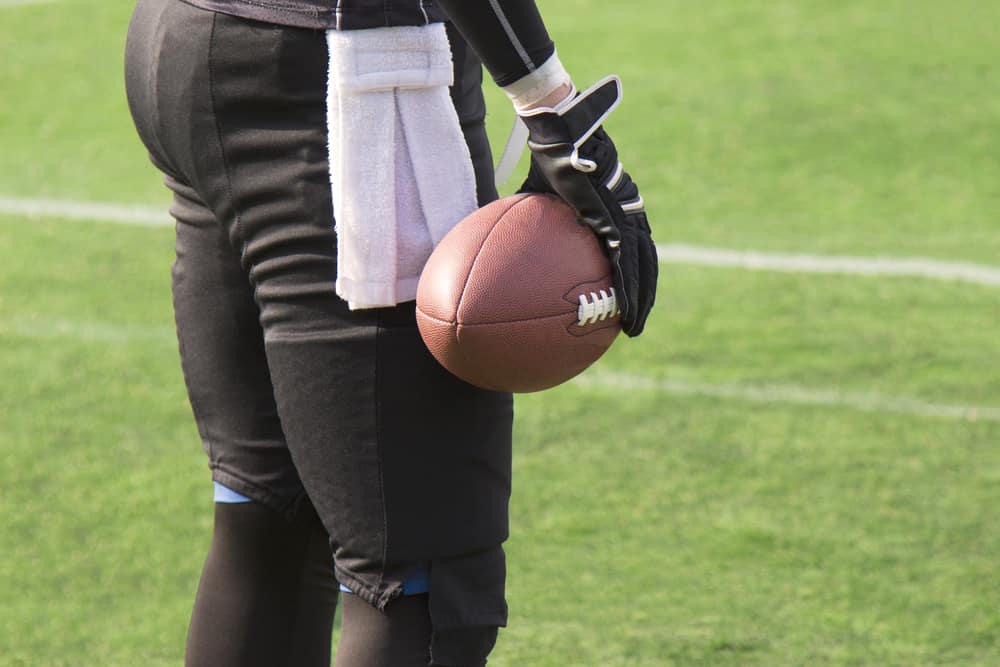 A common sight on a football field is a quarterback with a towel hanging from their pants.

You’ll often see them touch the towel after handling the ball.

You may wonder why some quarterbacks have a towel in the first place.

Quarterbacks have a towel to keep their hands and arms clean.

Because they’re directly handling the ball, there’s a good chance that if the ball is wet, their hands are also going to get wet.

That can lessen the friction between the ball and their hands.

It increases the chances of the ball slipping out of their hands.

The last thing any quarterback wants to do is drop the ball after a snap.

It can lead directly to a fumble and completely change the course of a game.

To ensure they’re able to get a good amount of friction on the ball, you’ll see quarterbacks wipe their hands and arms on the towel.

The towel is mostly used when it’s raining or snowing.

However, because it’s not uncommon for a quarterback’s hands to get sweaty, they’ll often use a towel throughout the game no matter the weather.

It’s not uncommon for receivers to have towels, too.

Since they’re also handling the ball, they want their hands to be dry to have a greater chance of capturing the ball.

However, having a towel streaming after them isn’t always ideal.

That said, if you see a quarterback with a towel, it’s because they’re trying to keep their hands dry and clean for better grip.

Do NFL Teams Use Lip Readers? 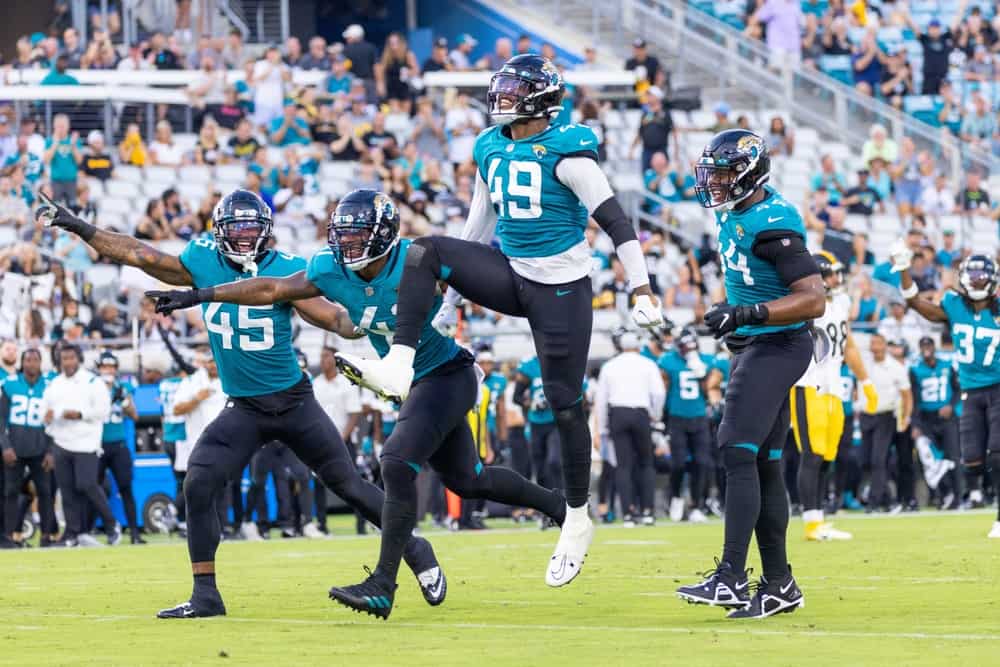 Yes, some NFL teams do use lip readers to give them an edge.

While they likely won’t ever admit it, The New York Times revealed that some teams employ a lip reader.

The lip reader sits on the sidelines and tries to read the lips of the coaches and players.

They then inform the coach of possible plays or actions that the other team is intending to take.

The lip reader might have another job, too, to keep their cover.

They might be a waterboy, for example, or even a trainer.

As a result, they’re able to read lips while performing their other tasks.

Some coaches might prefer their lip readers to remain in the booth.

They might be watching the other team on a monitor with coverage provided by a camera.

Since they have a different perspective of the coach, they might be able to see what they’re saying.

That’s why a lot of coaches are careful to keep their mouths covered.

They don’t want any lip readers on the other team to know what information they’re relaying to their players.

Some NFL teams do discretely have lip readers on their teams.

How Do NFL Teams Spy On Each Other? 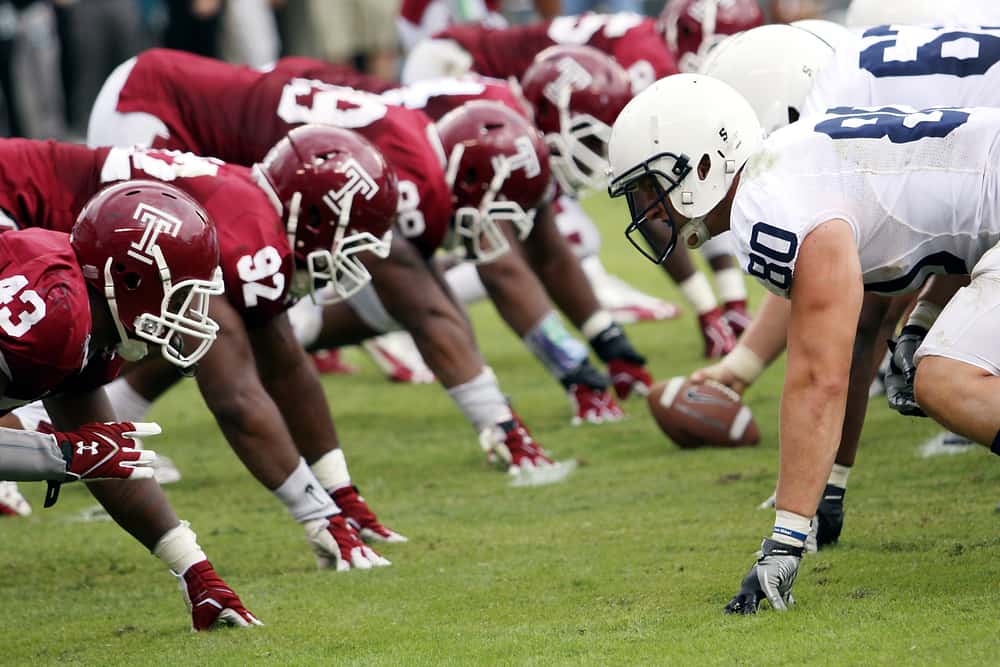 Spying in the NFL is something that has been occurring for decades.

Although the rules prohibit spying, it doesn’t stop coaches and teams from trying unique ways to gain information about their rivals.

Here are a few ways that NFL teams spy on each other.

One of the main methods that NFL teams use to spy on each other is lip reading.

They’ll employ a lip reader who will sit in during practice or a game and read as many lips as possible.

All you need to do is cover your mouth.

You just have to remember to do that each time.

It’s not uncommon for the media to attend practices.

They want to break stories about the up-and-coming team for that season.

Some NFL teams in the past have spent spies disguised as reporters.

They’ll attend a practice with the cover that they’re reporting on a player or a coach, but in reality, they’re memorizing or recording plays.

A lot of teams now have rules in place that prohibit media coverage or limit it.

A final way that some NFL teams spy is by stealing iPads.

A lot of team players use iPads that contain play information on them.

Security will confiscate the iPads often to ensure they don’t fall in the wrong hands.

Hacking is another concern.

As football uses more technology, there will likely be more opportunities for teams to steal information from one another

Coaches cover their mouths to prevent the other team from seeing what they’re saying.

Lip reading, and several other methods, are often used by some teams to steal information about plays. This then gives them an edge over their rival and helps them win the game.