You are here: Home / Cold Hard Facts / Why Do Chinese Swords Have Rings? (Everything To Know) 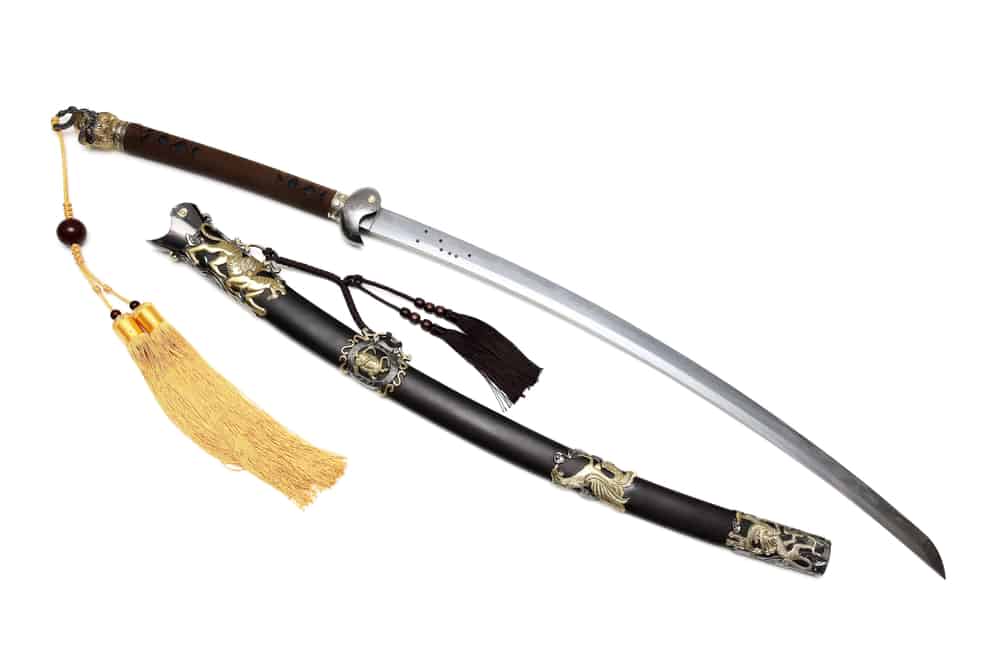 Swords are just as much a piece of cultural art as they are weapons.

The way that each swordsmith crafts a sword is based on the teaching of their past and the needs of the times when the swords were made.

Why Do Chinese Swords Have Rings? 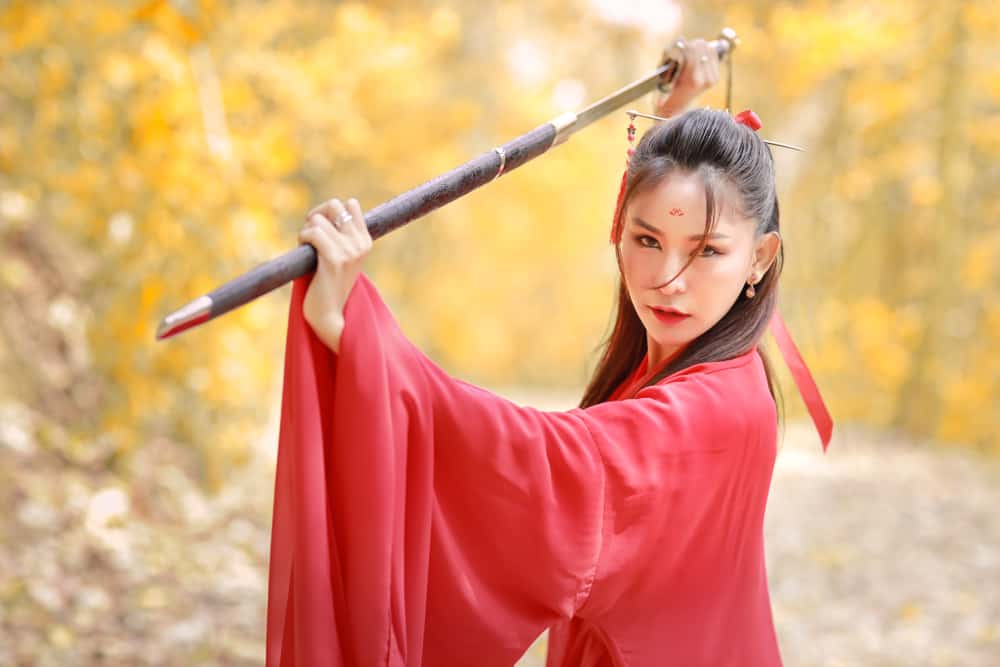 The rings on a Chinese sword such as the dadao serve many practical purposes.

Their key functions are balance, intimidation, and protection.

The needs and etiquette of the time also played a heavy role in their involvement.

The first purpose of the rings of a dadao is to serve as a counterweight, in order to increase inertia.

If a soldier were to swing two swords at the same speed with different weights, the heavier weapon would do more damage.

The heavier the weapon, the harder it will cut.

The rings of the sword help manipulate the center of gravity, thus allowing for more control.

The rings on a dadao are also meant to help the wielder intimidate any enemies.

Some dadao wielders would shake their swords in the air, creating a loud clanging sound.

They would accompany the sword shaking with yelling to spook any weaklings.

The rings also serve as a way to keep the user protected in two ways.

The Chinese swordsmiths knew that if a swordsman wedged their sword too deep into their enemy, the sword would get stuck and the swordsman would be vulnerable as they tried to yank the sword out.

Therefore, the swordsmiths put the rings on the back of the sword to keep the sword from getting stuck too deeply in someone.

If the sword still got stuck despite the rings, the swordsman could still pull the sword out by the rings for an easier grip.

The second protective function that the rings served was to help trap long, thin swords, such as a katana.

This wasn’t the use for the rings on every ringed sword, but those who had swords with larger rings used this tactic to their advantage.

The most common Chinese ringed sword is the Dadao. 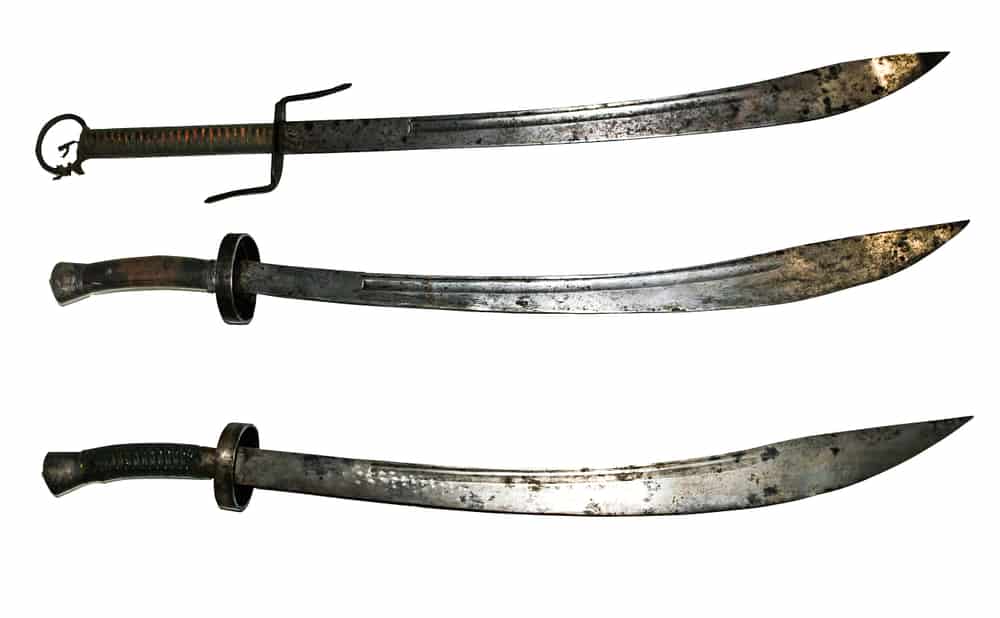 During World War II, the Chinese Army was struggling to hold back the Japanese forces who were hitting the Chinese army harder than a tsunami.

The large country was outmaneuvered by the fearsome island nation. While many Japanese swordsmen had katanas by their side, the Chinese government had the Dadao.

The dadao is about the same length as a katana, but the dadao has a much wider blade that is arched back towards the wielder.

This extremely heavy sword could be used to give one mighty swing to kill your opponent.

Thanks to its size, the dadao is extremely durable and was the weapon of choice for harsh, intense combat.

It was said to have taken off the heads of enemies in a single swing and that some governments considered making steel collars to protect their soldiers from being beheaded by its gnarly blade.

Even with its intense damage output, the Dadao was much simpler to make than other swords.

During the night of Xifengkou in World War II, the Chinese Army gave 500 of its best swordsmen well-crafted dadao, and they defeated 3,000 soldiers.

However, by the end of the night, only 20 of the original 500 men were left alive.

The Japanese forces had more technological weapons available to them, but the finesse and pure strength of the dadao soldiers kept them alive.

Villagers who had the soldiers staying with them would tell tales of how long these soldiers would train with their swords and how tirelessly they trained.

The soldiers would even help the tiny villages with chores, like cutting wood, just to build up more muscle.

There were other swords that Chinese swordsmiths have made, but not all of them have rings. 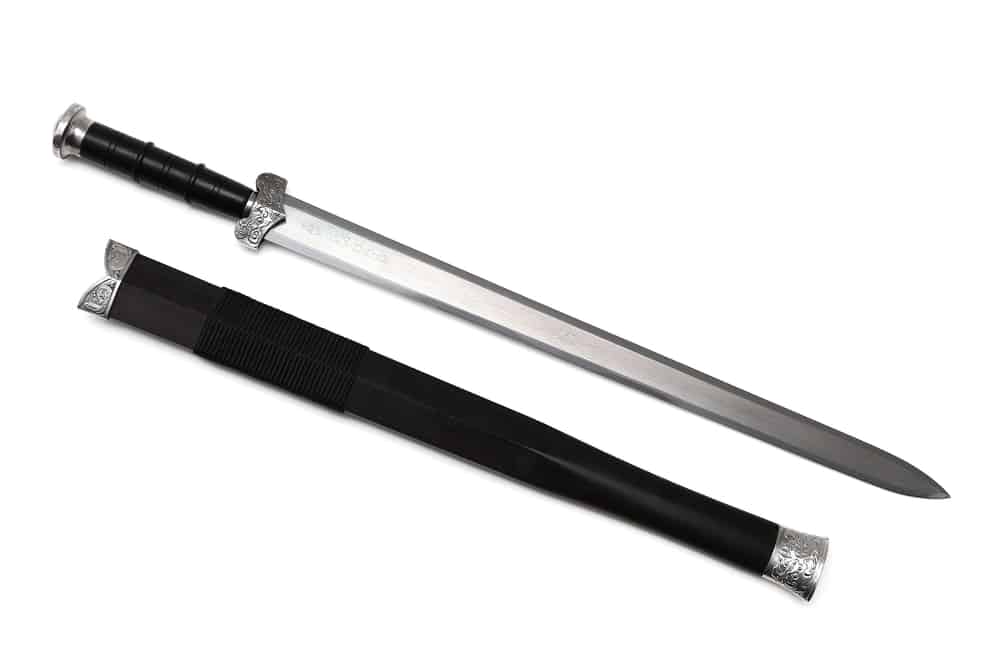 If a swordsman preferred something a bit more refined, they may have chosen the jian over the dadao.

The jian was known as the gentleman’s weapon thanks to its sleek design.

The jiànfeng is the sharpest part of the blade and is used for piercing enemies.

The zhongren isn’t as sharp as the jiànfeng, but it is stronger.

It is used for cutting enemies.

The jiàngen is the dullest part of the blade and helps strengthen and support the whole blade.

Unlike the dadao, most jian are made for single-handed combat.

However, the larger the sword, the heavier it will be.

Some jian are big enough to require both hands to be able to wield it effectively.

Most jian were made with bronze, going back as far as 2,500 years ago.

There are still swordsmiths who continue the tradition of sword creation who make jian out of many high-quality, precious metals.

Although the sword was previously only used by the scholar class of China, now many of those who study tai chi study the jian’s long, sophisticated blade.

Many modern martial arts masters have learned how to use this weapon with great skill.

Like a rapier, the jian is meant to deal more damage by stabbing your enemy with the sword rather than slashing them with it.

High-ranking officials of the Chinese army carried these swords as a sign of their skill and their reputation. 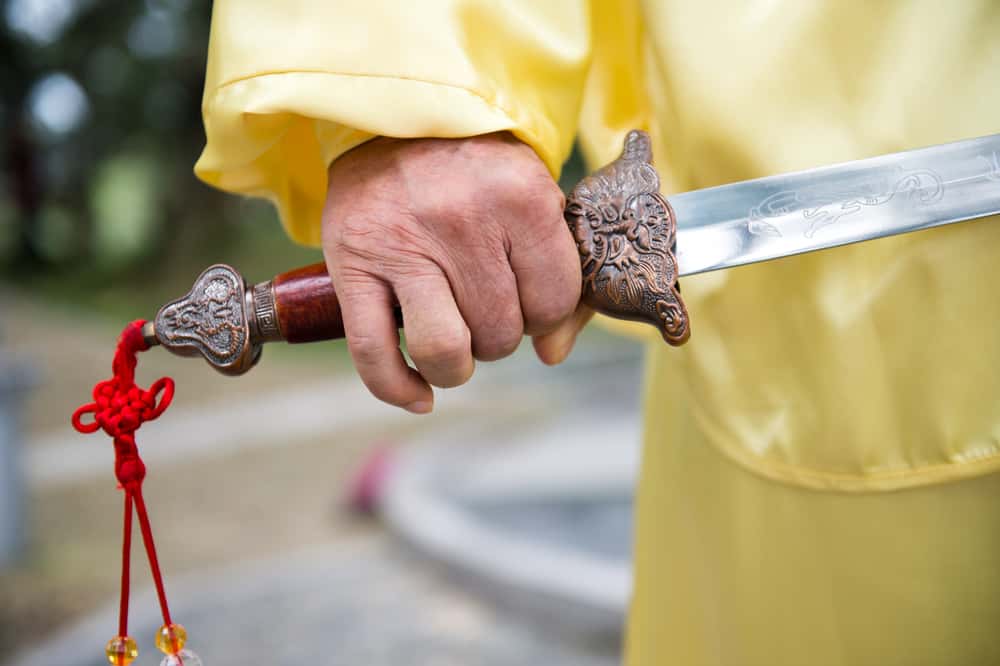 During the Han Dynasty, the zhanmadao reigned supreme.

This sword was seen as one of the best anti-cavalry swords.

These large swords would be able to slice through even a horse’s leg, taking a rider off their horse in a single swing.

The sword has a single, curved blade and an extended grip for the two hands it took to swing this long sword.

These swords could be up to six feet long!

The name “zhanmadao” translates to “chopping saber“, which is exactly what they did.

The zhanmadao has been around longer than the katana.

While China wasn’t the only country to make the zhanmadao, they were the ones to popularize and perfect the blade.

Some claim that the zhanmadao was the inspiration for famous Japanese swords such as the katana and the wakizashi.

The zhanmadao was good for more than just fighting cavalry.

It could also be used for clearing out large, crowded groups of men.

The slightly curved design of the zhanmadao helped make it an incredibly versatile weapon in battle.

Sadly, due to the prolific use of the swords and their age, there are not many left from their prime.

The ones that museums have managed to find and keep safe have extremely intricate designs on them and beautiful wrappings on the handles.

These swords may have been made for war, but their beauty was not to be forgotten. 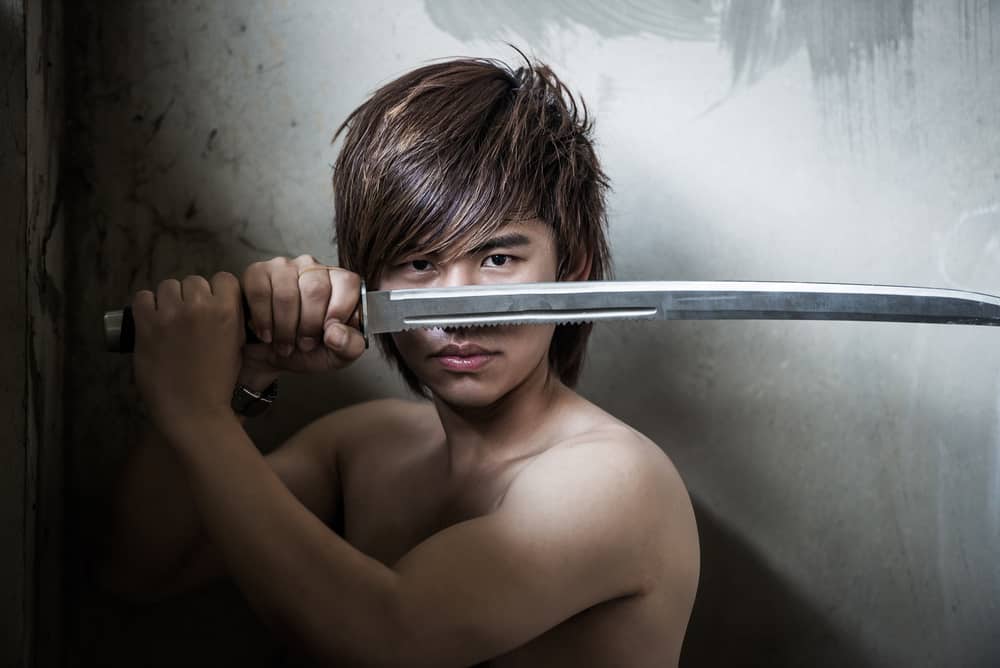 The Liuyedao is a much smaller sword than the zhanmadao, but its smaller size is no disadvantage.

The liuyedao was popular during the Ming and Qing dynasties thanks to the gentle curve of its blade and chop-and-slice fighting style.

This sword weighs two to three pounds, with a blade that is anywhere from 36 to 39 inches in length.

This sword is often called the willow leaf saber.

The liuyedao is made by adding multiple layers of steel, which gives the blade the appearance of flowing water.

The liuyedao could have either a thick or a thin blade.

If a liuyedao has a thin blade, it may also be called a miáodāo, or a “sprout saber”.

Among modern-day sword collectors and historians, the liuyedao is a fan favorite.

The liuyedao is one of the most refined and beautiful swords of Chinese origin. The bent hilt helps give the saber an even more unique look. 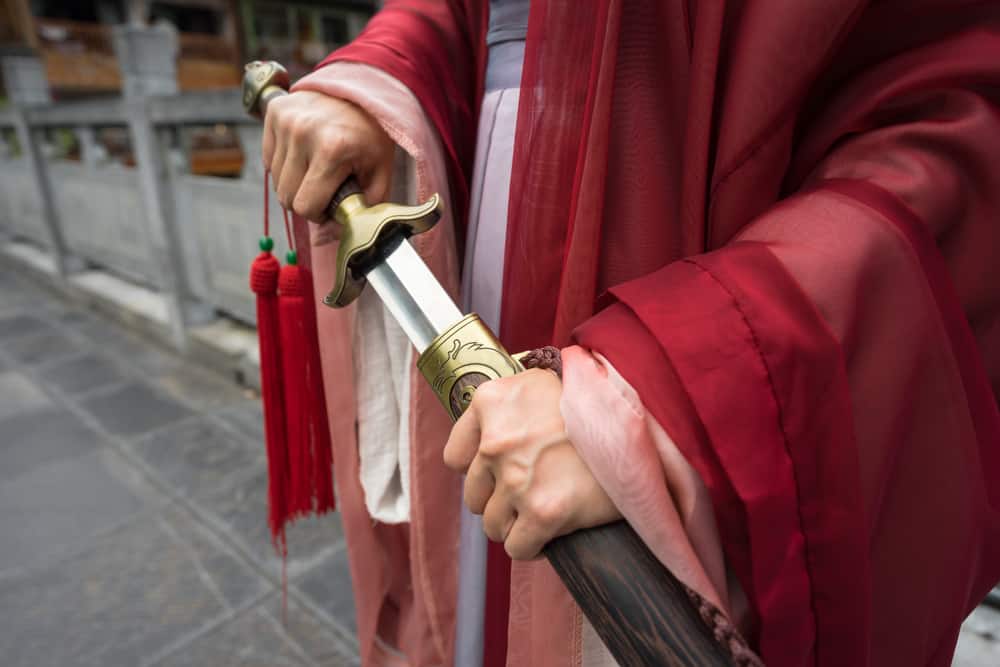 The wodao is one of the oldest types of swords in Chinese history.

The long sword has a thick blade that curved at the very end, which was made for hard, powerful strikes. The wodao’s name means “sword of the wo people”.

The wodao was the preferred weapon of General Qui Jiguang of the Ming Dynasty, who filled his armory with these swords.

Jiguang believed that the swords gave his military a competitive advantage over other armies.

The strength that it took to wield the wodao made General Qui Jiguang’s armies train for years to master the weapon.

This weapon had a blade that was 30 to 35 inches long.

The large blade made it impossible to wield with one hand, so both hands were necessary in order to swing it well enough.

The wodao’s popularity spread through the world and inspired the designs of many other swords.

Even Japanese Samurai would occasionally carry a wodao, although most samurai would use the tachi, which was created using the same framework as a wodao. 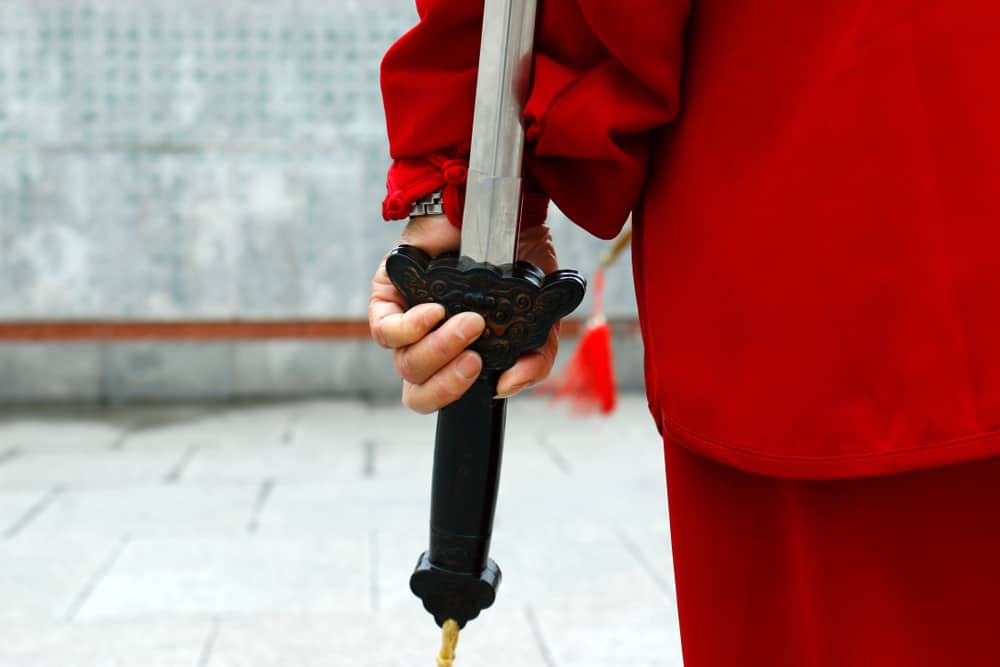 The yanmaodao, or the Goose Quill saber, may look like a katana, but it is actually a completely different weapon.

Much like the liuyedao, the yanmaodao is formed by folding metals to forge the long, thin blade.

The ripple effect that is caused by the folding gives the sword its goose feather appearance.

The yanmaodao was created during the Ming dynasty, but with its sleek, elegant design, it remained popular into the 18th century.

When the sword was first forged, the metals were folded to cleanse them of any impurities.

Although metals can now be bought in pure form, the folding method is still used to keep the feather-like design feature of the sword.

The yanmaodao is known for its ability to cut and slash enemies with ease.

Although it may not be as hard of a hitter as the wodao or the zhanmadao, this lighter sword is able to release faster, more agile swings.

There is a subtle curve to the blade that allows the wielder to build up more inertia in a single swing.

The yanmaodao offers little to no resistance when cutting thanks to the slight curve and sharpness of the blade.

The yanmaodao took into consideration the long history of swordsmithing when it was created.

Swordsmen who were looking for that sword that had the best of every feature turned to the yanmaodao.

Like the jian, the yanmaodao was excellent for thrusting attacks and stabbing through enemies.

Much like the dadao, the yanmaodao was still able to cut and slash through enemies with ease.

Chinese swordsmiths take great pride in the history of their art.

They would learn from those who came before them and used techniques and technology that were modern for their time.

The art of sword making continues to this day, with both modern and traditional methods. 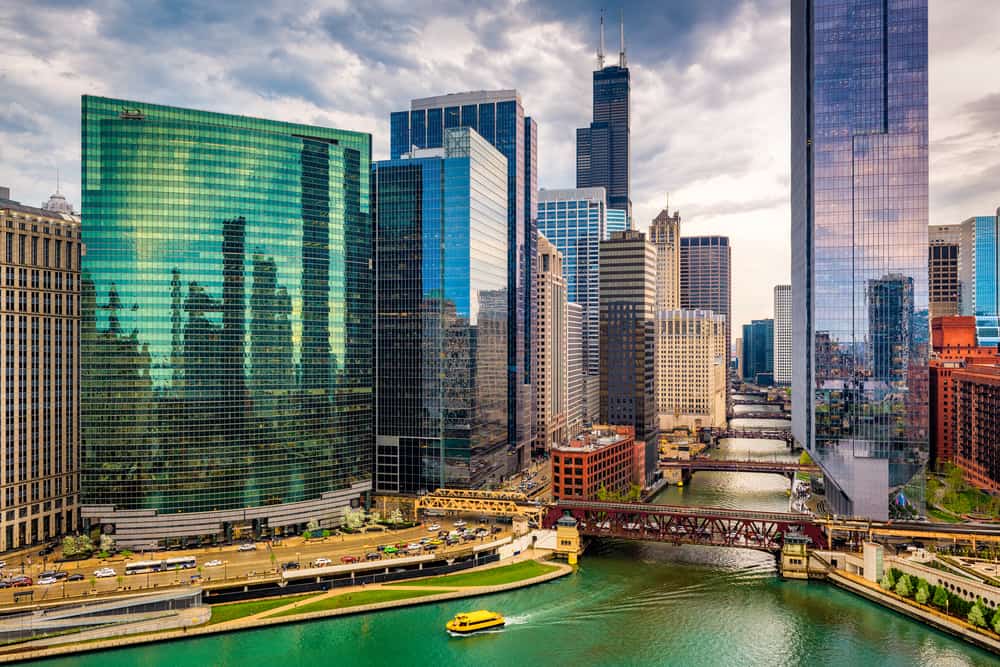 Why Is Chicago Called The Windy City? (Explained) 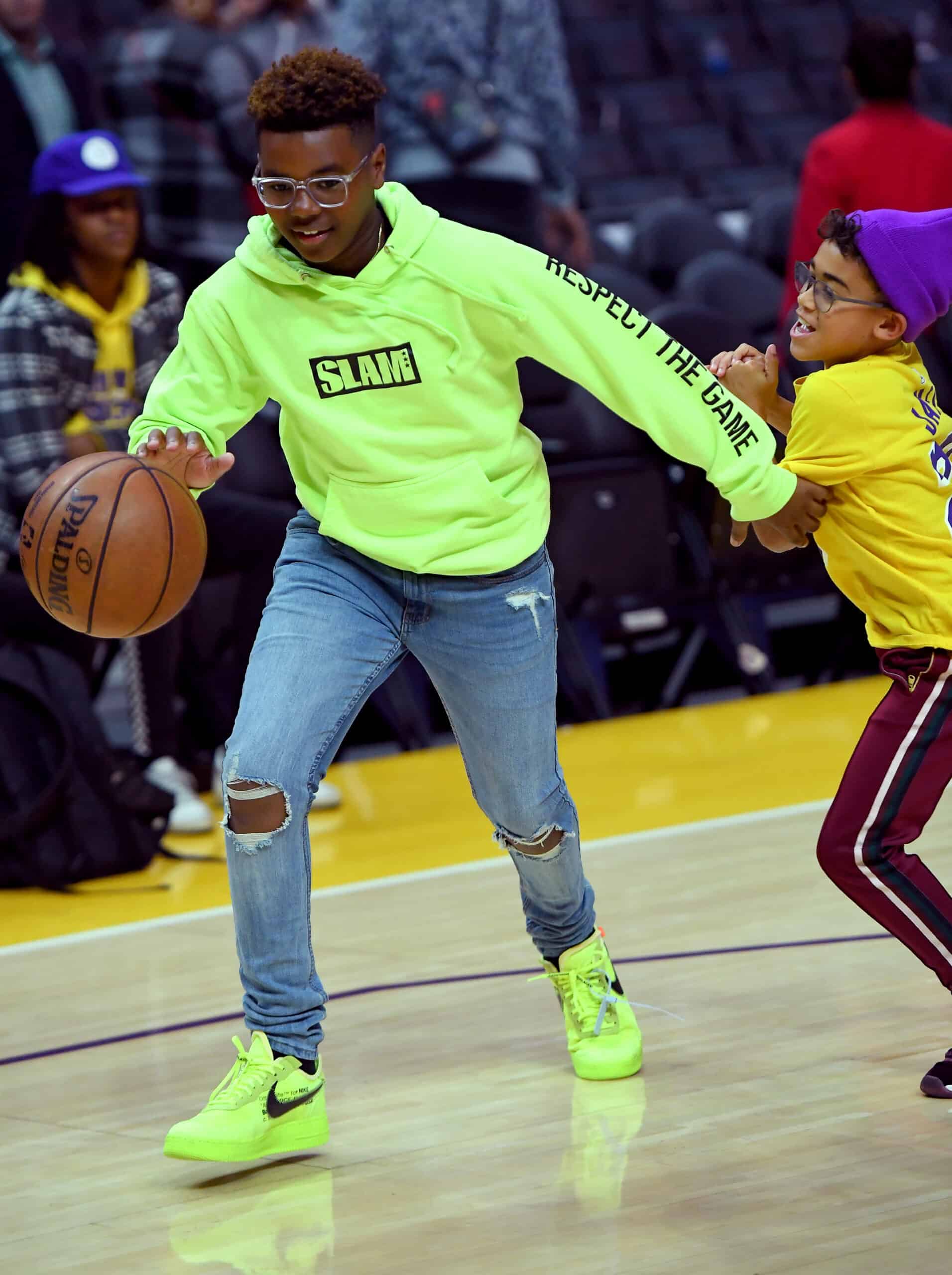 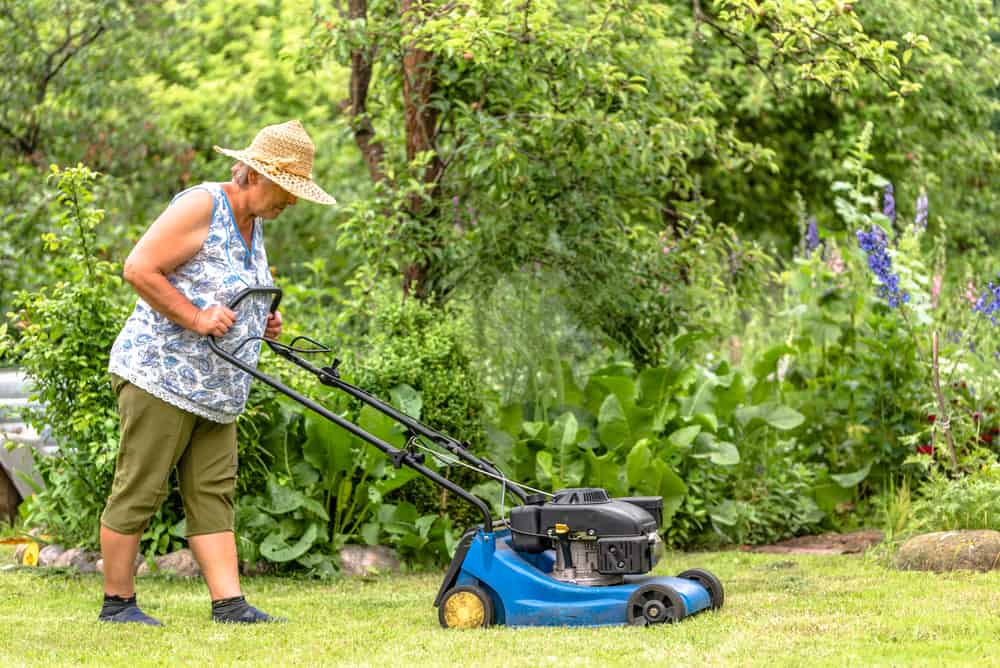 What Temperature Is Too Hot To Mow Grass? (Explained)

Why Do Chinese Swords Have Rings? (Everything To Know)