You are here: Home / The Cold Spotlight / Why Are There Few Volcanoes In The Himalayas? (Everything To Know) 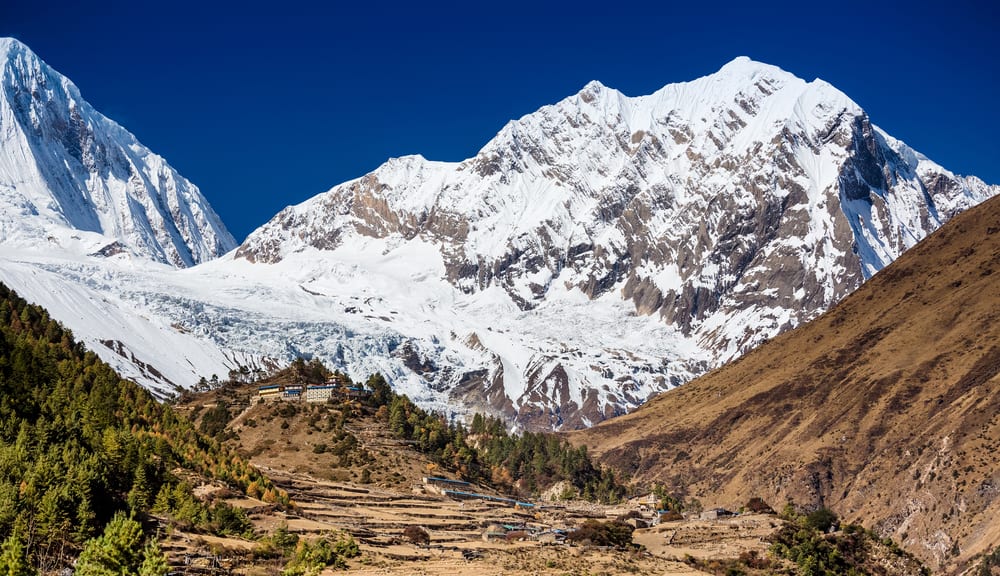 The Himalayas are a mountain chain located in the northeastern region of India and span five countries.

These countries are India, Nepal, China, Bhutan, Pakistan, and Afghanistan.

The mountain chain has many treasures in many ways.

Their history would be a magical thing to hear if they could talk.

One way they don’t speak is through volcanic activity, but they do have another voice, and here, you’ll learn what and why.

Why Are There Few Volcanoes In The Himalayas? 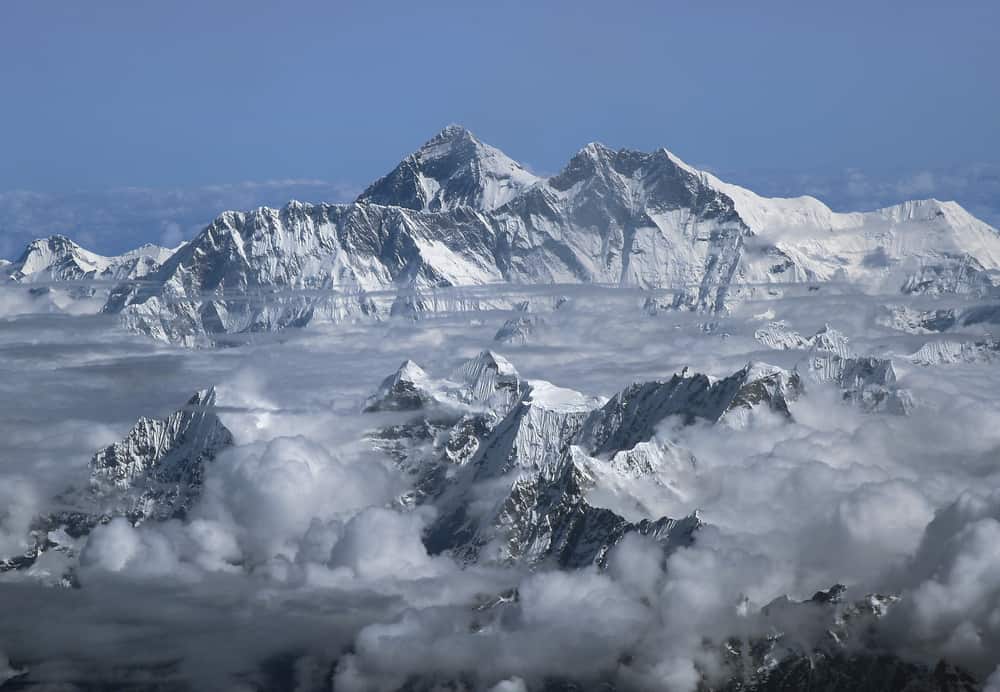 There are few volcanoes in the Himalayas because there are no subducted plates.

It is an earthquake zone, and yes, there are volcanoes, but no eruptions.

The geology just doesn’t support it at this time.

This is because the earth is an ever-changing landscape.

India is a major player in the making of the Himalayas.

Continents move all the time through minor tremors, major earthquakes, and silently under the sea.

India has been moving north for 40 million years.

It’s been gently—and sometimes not so gently—bumping into Asia for the whole time.

This is what has been creating the Himalayan mountain chain.

The term ‘creating’ is used because mountain chains are never finished being formed.

Are There Volcanoes Close To The Himalayas? 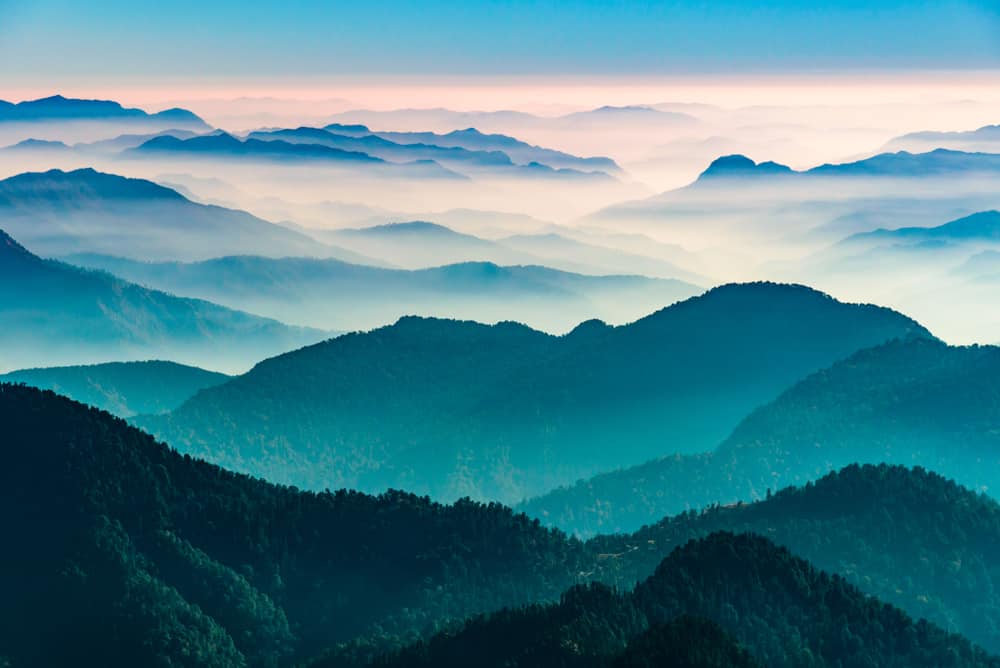 No, there aren’t any volcanoes near or in the Himalayas or South Asia as a whole.

There are plenty of areas in the world with volcanoes.

There are 1,500 of them currently that can be potentially active, and 500 of them have erupted in human history.

What Is The Ring Of Fire? 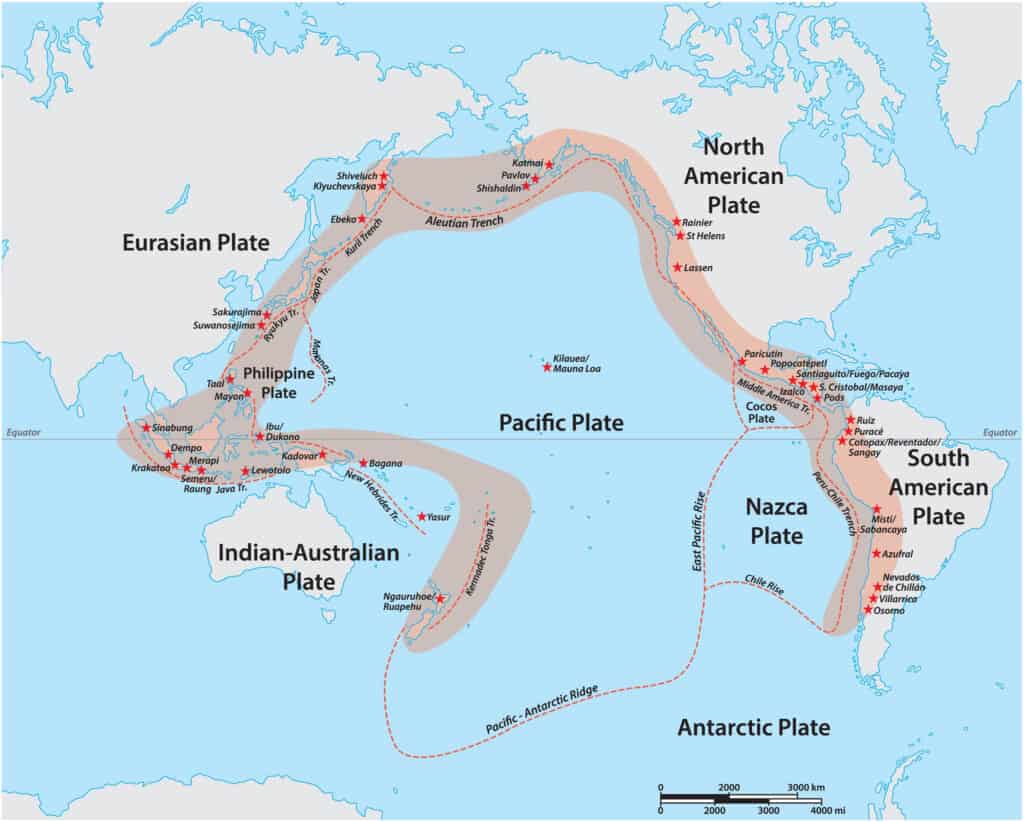 The Ring of Fire is where most of those said volcanoes are, seated around the Pacific Rim.

Hawaii is in the ring’s center and the outer edges are made up of the US and Cascade Alaskan ranges, Indonesia, Canada, Philippines, Guatemala, Mexico, Antarctica, Russia, Papua New Guinea, Peru, Taiwan.

These are the most volatile areas on the planet when it comes to volcanic activity.

The glow of a pyroclastic flow is not uncommon in these spaces from time to time.

It’s as beautiful and destructive as nature can be.

Are Volcanoes Under The Ocean? 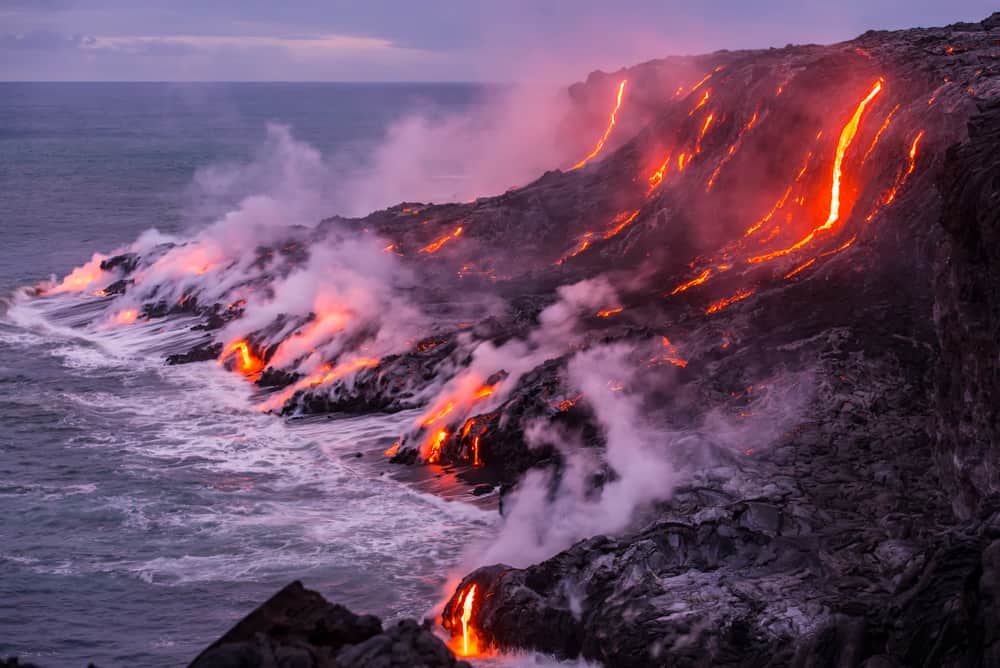 Oceanic volcanoes occur in what are called the spreading ridges.

Scientists believe that 80% of volcanic eruptions occur on the ocean floor.

They aren’t that easy to find.

There was one discovered that was named the West Mata Volcano.

This monster is located 4,000 feet in the depths of the Pacific Ocean.

Are There A Lot Of Earthquakes In The Himalayas? 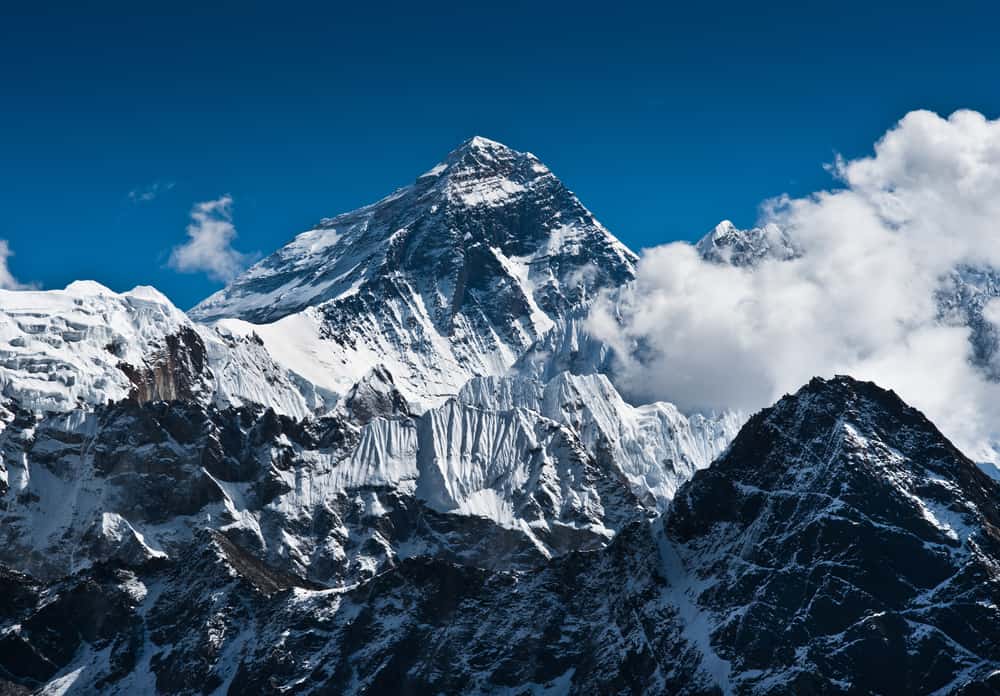 Yes, at any given time, there are earthquakes in the Himalayas ranging from small to quite large.

First, it’s important to know that the Himalayas house some of the highest mountains on the planet, including the world-famous Mount Everest.

It’s that well known because so many people want to conquer it by climbing to the peak.

Some succeed, but the mountain has claimed the lives of many others.

It’s a risk they understand before they begin the venture upward.

There is a 2,000-kilometer region, called an arc, that seismologists and other scientists have marked out as the place most likely to serve up a significant earthquake.

For this to be accurate, they’ve used seismic reports dating back to the 16th century.

This data was obtained not by using modern equipment.

The evidence is in the ground showing dramatic signs of shaking and stretching for that time. 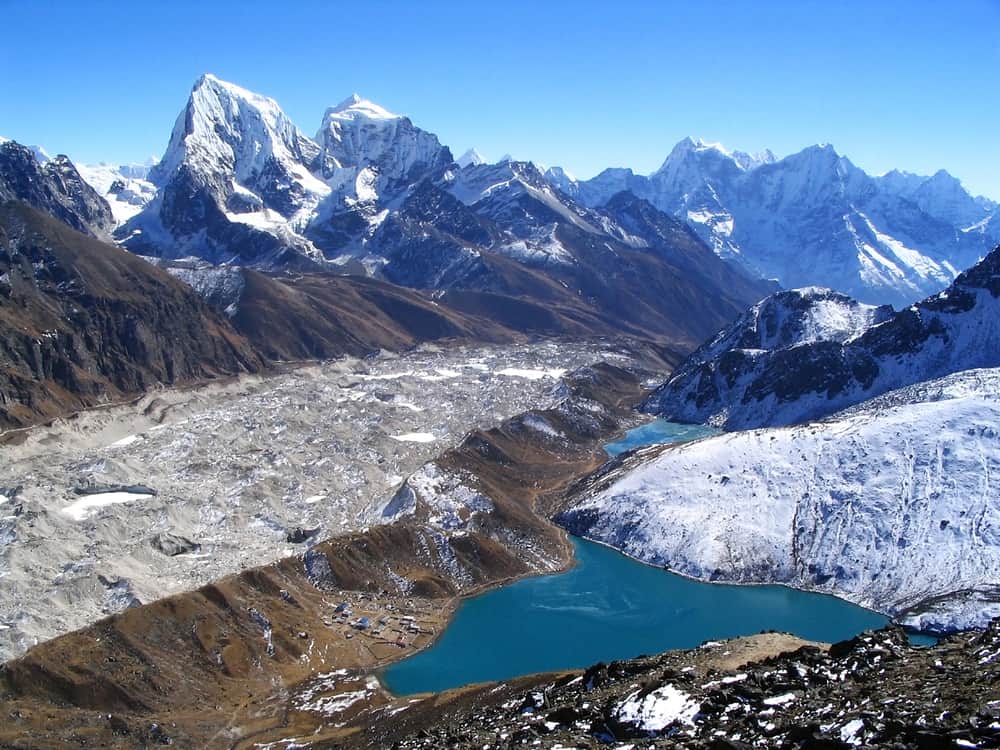 The crumple zone is a name given to the Himalayas due to how they were formed.

As the continental plates in what is now India and Asia collide, this literally caused a crumpling, rather than subduction in the earth below.

This is why there are no volcanic eruptions as subduction is needed for this to occur.

Crumpling does, however, provide much in the way of earthquakes.

How does this happen?

Earthquakes will happen in the portion of the arc where the land on the Indian side has not fallen under the Asian side of the equation.

Once the land gets locked to the point where it has to give, it will do so violently and thus cause a severe earthquake.

In 2015, the Ghorka earthquake in Nepal can be showcased as the perfect example of the aforementioned seismology.

The activity originates from the Main Himalayan Trust region that houses the plate boundary fault line.

How Are Crumple Zones Studied In The Himalayas? 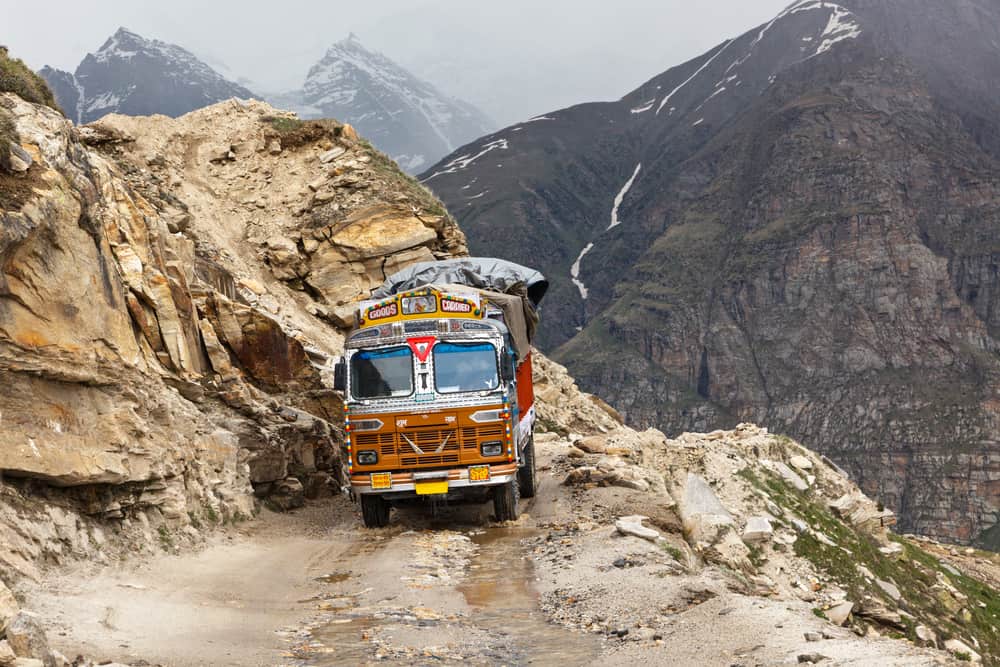 The California Institute of Technology (CalTech) is one of the most active in the study of seismic activity in the Himalayas.

Their job is to pinpoint what areas are most at risk.

This is a delicate and precise monitoring process.

In short, they compare the known rates at which the two continents will converge each year.

Taking the readings in their history, plus the geological evidence we discussed in the previous section, seismologists then compare that routine velocity to the relative velocities from up to 270 GPS stations scattered throughout the region.

Are There Large Populations In Danger Of Earthquake Destruction? 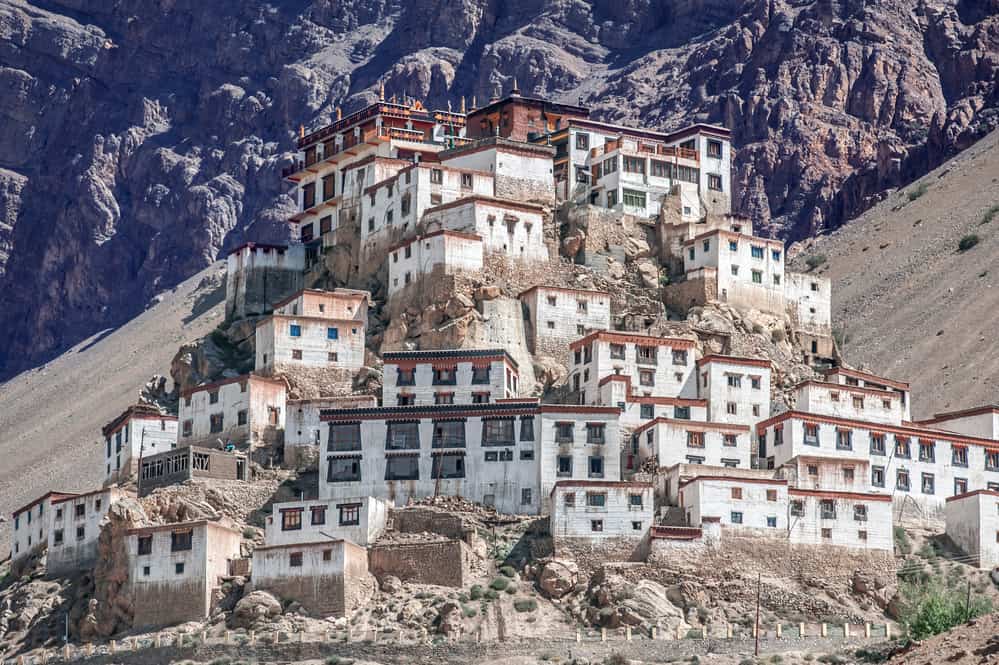 There are large swaths of population that reside along the dangerous parts of the arc, largely in India, Nepal, and Bhutan, running hundreds of miles.

The estimated strength of many possible earthquakes is at a magnitude 8.5. In this case, widespread destruction and deaths may occur.

The support of that estimate comes from the historical accounts of seismic activity between 1505 and 2015.

The work has been crucial in the design of the Himalayan Seismic Map.

With this, they can see changes in the Himalayas that they could surmise a pattern of and possibly contribute to the safety of the population.

However, there is really nothing that can be done to prevent anything in that regard.

The Himalayas are a large, towering part of nature, and nature does what it wants regardless of where we decide to live.

How Can Himalayan Countries Prepare For The Next Big One? 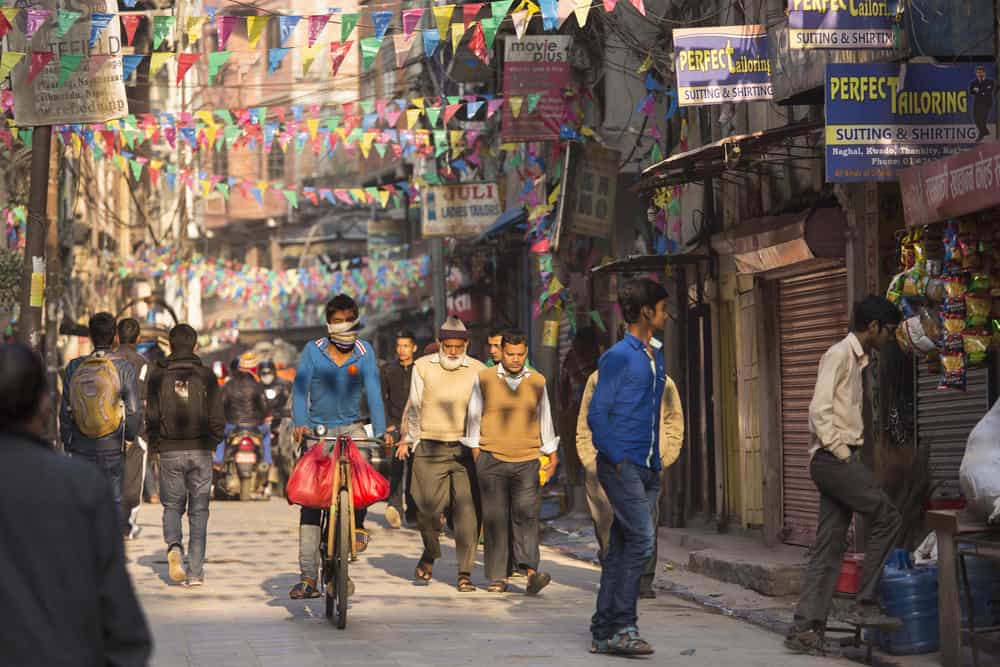 They can prepare for another one, and looking at the history will teach them much about how to do so.

It’s hard for one to think of the devastation that could ensue for the people in the nations of the Himalayas.

The world looked on in horror and sadness as Nepal tried to pick up the pieces after the two devastating earthquakes in the spring of 2015.

They are calm and resilient people there and did well with what they could to recover, but to no avail, with 8.1 million people in need of emergency assistance and 8,000 people dead.

The emergency teams were called to halt the rescue effort after the first earthquake because they felt they wouldn’t be finding survivors.

Unfortunately, it may take years to help everyone, and a full recovery has not been made as the needs outweighed the budget.

Some of the hardest hit were the small outlying villages and most of Kathmandu.

It’s much more common to have earthquakes in South Asia, but the problem for the Himalayan arc is it’s far more probable for severe earthquakes to happen there and not in the southern region.

This leaves the population quite vulnerable.

How do they prepare for the next inevitable one since most of those people cannot afford to relocate easily, if at all?

Then, other natural disasters get spawned by our shifting Earth, even silent ones.

Flash floods and deadly landslides can happen without warning, but they are virtually guaranteed after an earthquake.

What Are The Steps That Must Be Implemented For Himalayan Earthquakes? 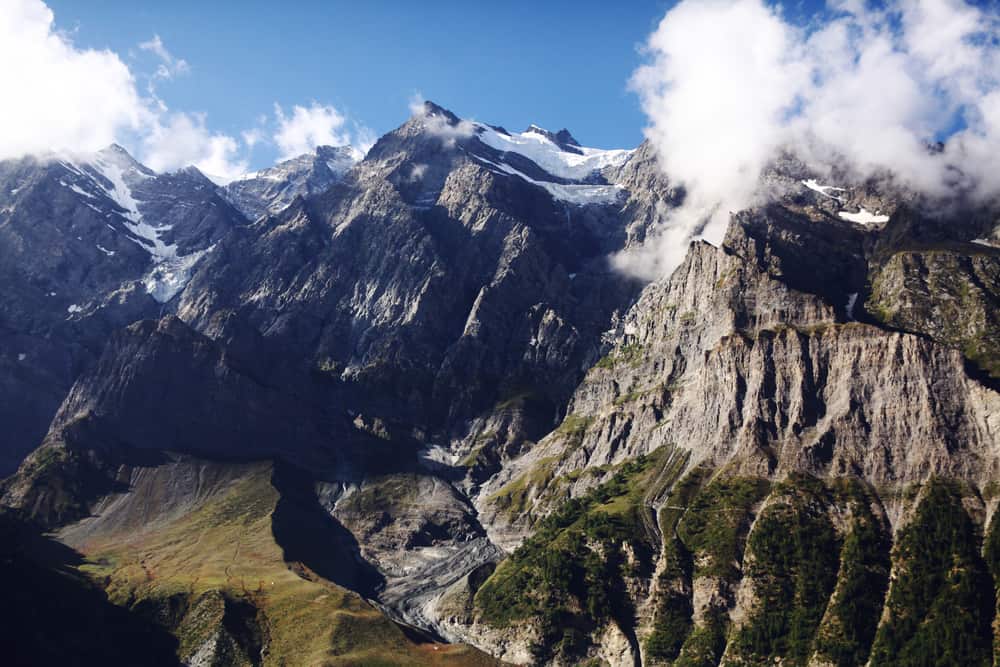 These regions, including much of South Asia, can take a chapter from Japan and New Zealand’s books of earthquake preparedness, as they are the leaders in this by far.

The first thing is compliance with earthquake structural codes for buildings.

There’s no sense in having other plans in place if structures fall apart and leave people vulnerable to ride it out in the streets and school buildings to fall on the innocent.

It’s not the fault of the residents.

It’s expensive and something has to be done to revamp the present system in order to accomplish earthquake safety.

According to The Third Pole, right now, the National Society for Earthquake Technology (NSET) is working tirelessly to retrofit schools, hospitals, and other important institutions, to come up to speed in the building code.

Evacuation drills comparable to those of Japan and New Zealand are also taking place, but much more must be done before any amount of comfort can be had by the countries in the Himalayan arc.

What Is The Most Vulnerable Densely Populated City Affected By The Fault Line? 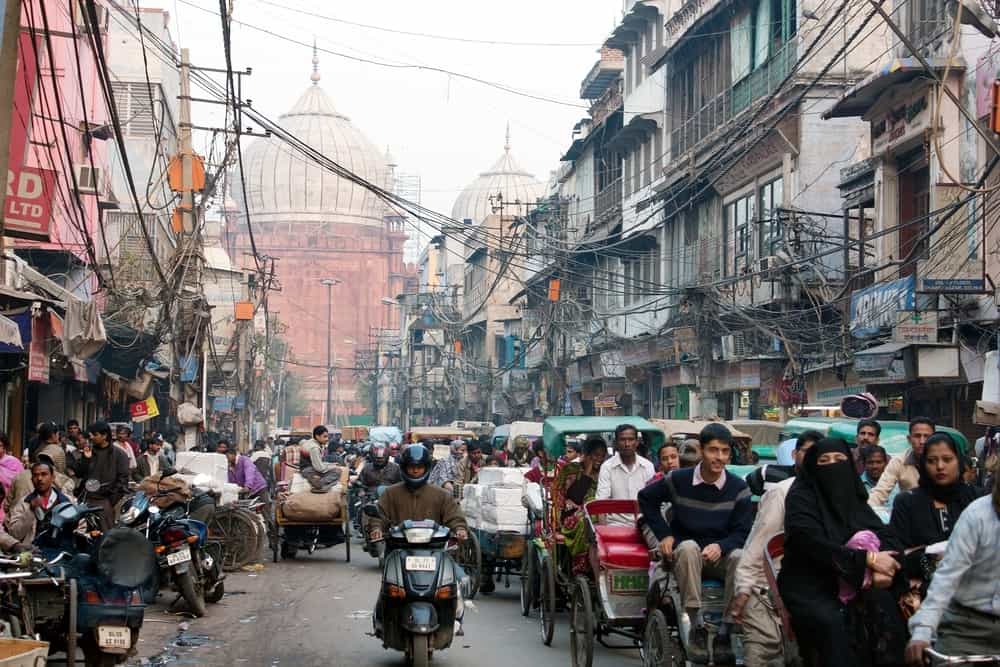 New Delhi is a densely populated city with all the hustle and bustle of America’s metropolises.

Experts say that the solution is more about the construction of stronger buildings rather than the reinforcement of the old ones or even the complete renovation thereof.

It has been suggested by the experts to use rubber tires as a reinforcement and impact resistant solution to earthquake damage.

Do Volcanoes Cause Tsunamis? 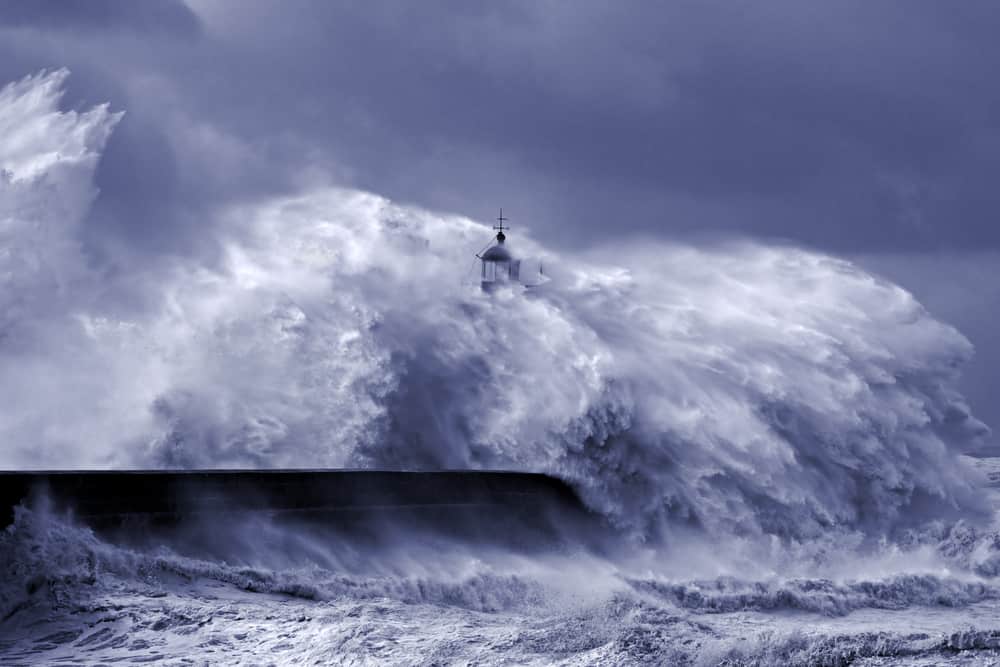 Volcanoes can cause tsunamis by causing a chain reaction from eruptions that take place far beneath the oceans to the earthquakes that follow.

A volcano does not have to erupt for a tsunami to take place, though.

Tsunamis are sometimes mistaken for storms like hurricanes or cyclones.

They do not come from the air and are not storms.

They happen during any weather from what’s going on underneath the surface, not above.

There are warning signs if you happen to be close enough to the beach, but by then, it can be too late to escape.

You’ll have to take cover on high ground very quickly.

If you see the ocean pull back to reveal a much larger shoreline, then it’s ready to come back with a vengeance.

This is also not 100% guaranteed, but if you see it, get out of there quickly. 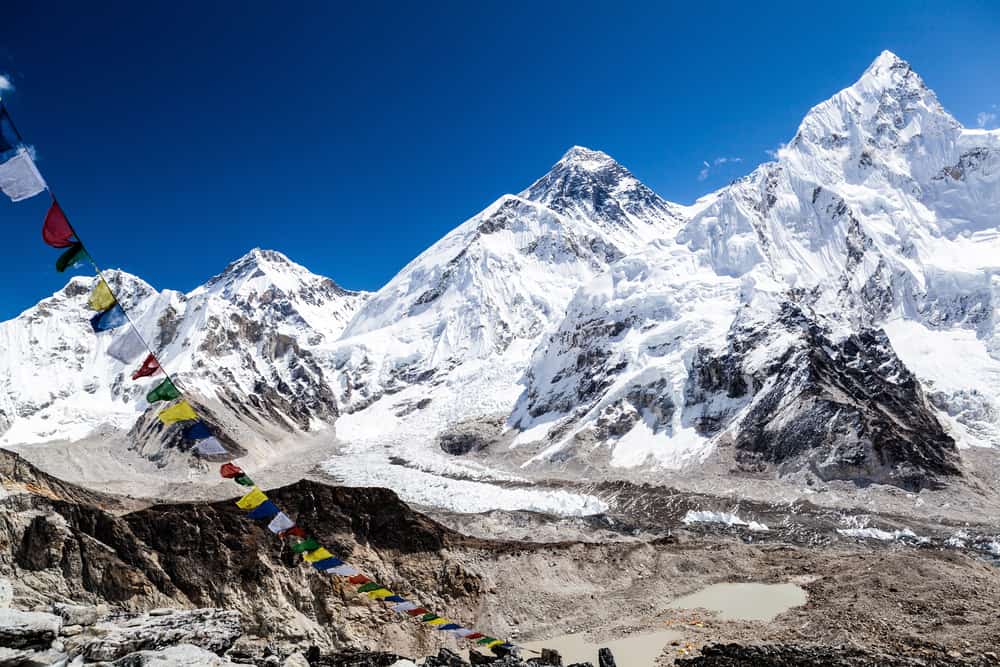 The study of volcanoes is the key to finding out just how islands and other landmasses are formed.

They are beautiful things that birth the very lands we stand on today and call countries and nations.

A volcanic eruption can leave death and destruction in its wake.

They can cause earthquakes that are devastating and tsunamis that wipe out whole islands.

That’s the violent birthing pains of the Earth itself.

What comes after is what has been created: the new landmasses, the cleansing of oceans, and the most fertile soil on the planet.

New life can begin from here.

With the help of the volcano, the Earth can and will take care of itself.

Why Are There Few Volcanoes In The Himalayas? (Everything To Know)