You are here: Home / The Cold Spotlight / Why Are Sesame Seeds On Buns? (Everything To Know) 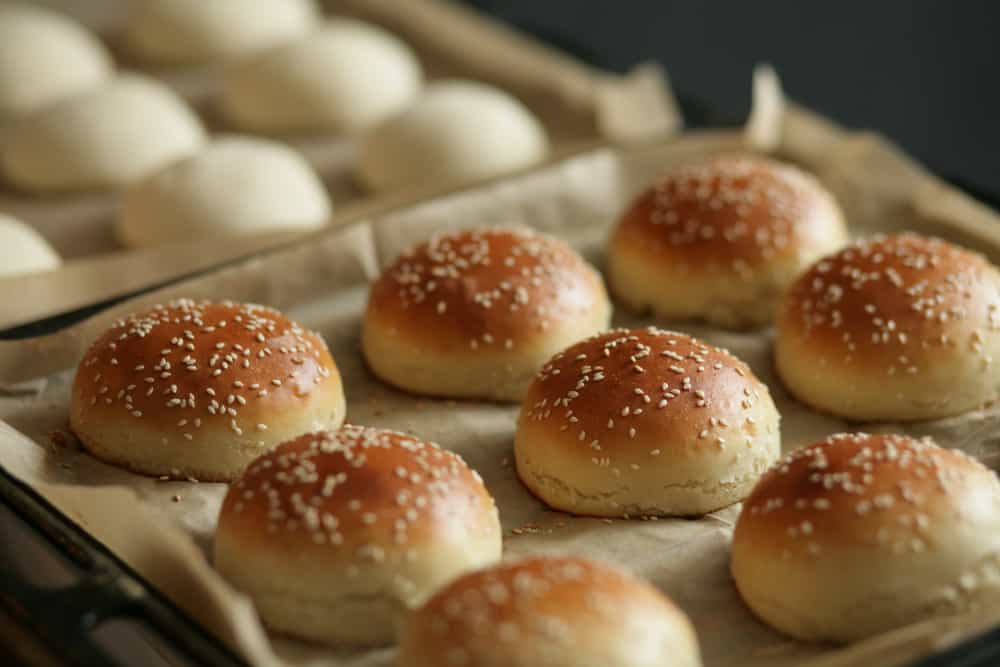 A sesame seed is a multifunctional little seed.

It’s a tasty one, too, with a rather nutty flavor which is why it’s used in foods like tahini.

They are most commonly found on hamburger buns, and McDonald’s made them a household item through their commercials and their company jingle that sang about the two all-beef patties, special sauce, lettuce, cheese, pickles, onions on a sesame seed bun.

Why Are Sesame Seeds On Buns? 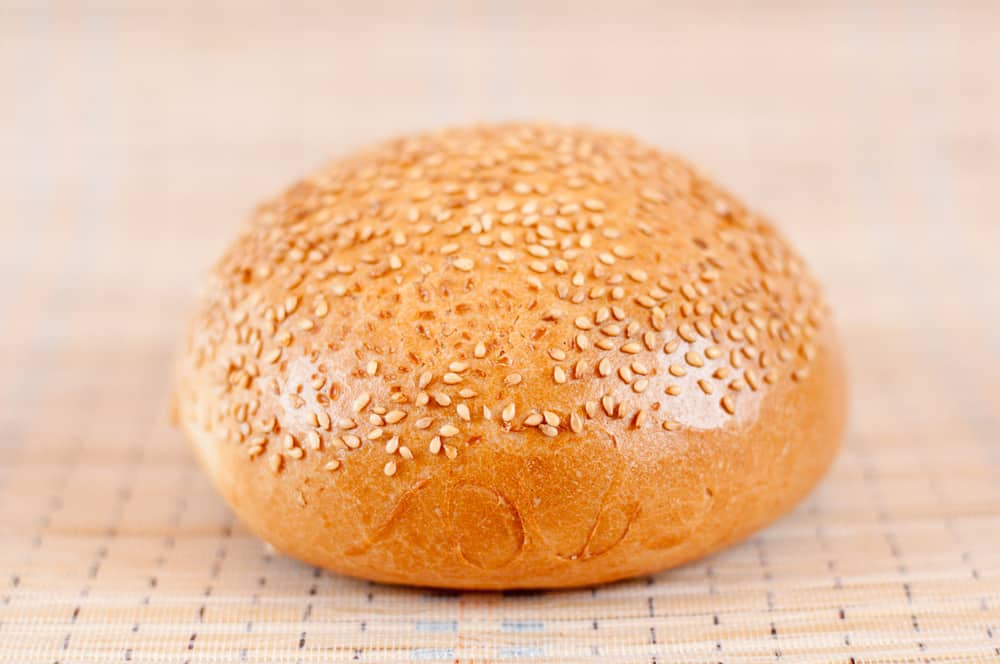 Sesame sees are on buns because they add flavor, but mostly texture and make the bun more interesting than just a plain white or brown bun.

Typically, they are used on hamburger buns in fast-food restaurants like Burger King and sold at grocery stores and bakeries. 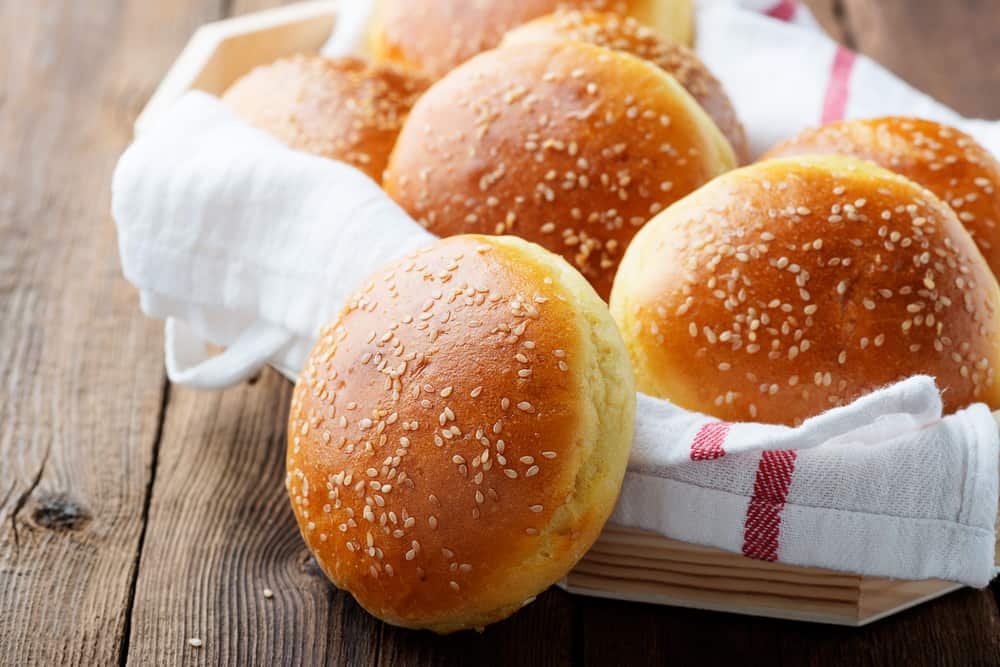 Oscar Weber Billy from Oklahoma was apparently the first person to put sesame seeds on a bun.

A man lovingly referred to as Grandpa Billy cooked up some hamburger patties and placed them just as lovingly on his wife’s yeast buns which had sesame seeds atop them.

The buns are from her secret recipe.

We don’t know if it still is a secret.

It seems we love to taste them.

Baking bread back then was simply incredible.

You could almost imagine the smell of warm yeast buns in the air.

The culmination of that great culinary experiment was an absolute success, and every July 4th, Grandpa Billy served them up to family and friends.

How Do Sesame Seeds Stick To Buns? 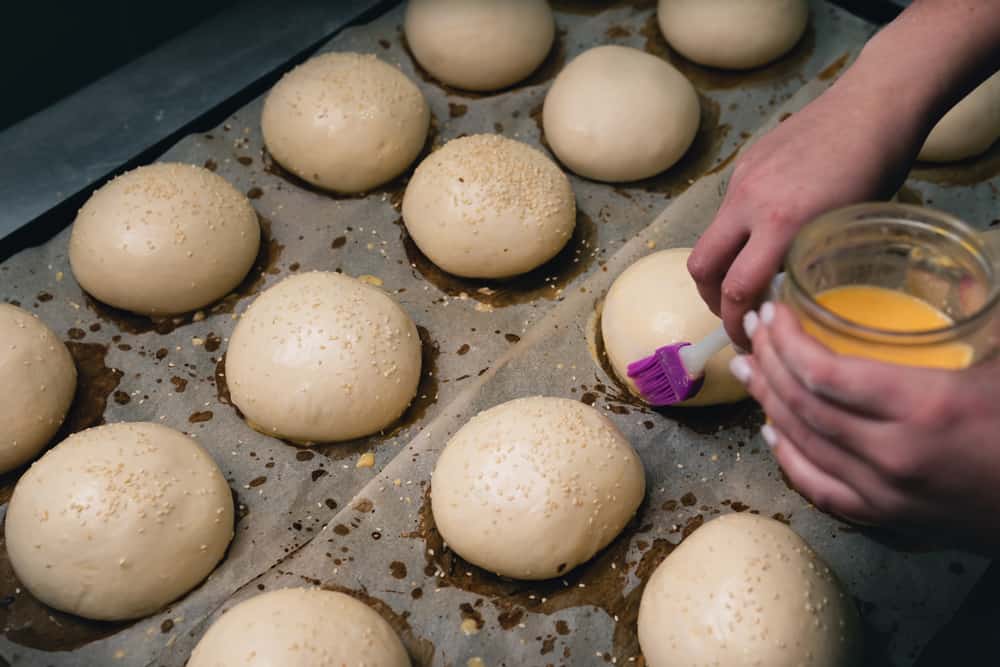 There are several ways to get the sesame seeds to stick to buns.

The first way was to get them to stick to the proofed dough prior to baking.

As they are baked, about ten percent of them will fall off and the rest will hang on as long as the buns are handled properly.

This is not the absolute best way to do it, but it works.

The second and more effective way to do it is a little melted butter brushed on with a pastry brush while they are baked and still warm.

Water has also been used, and egg wash which is just egg and milk.

Milk alone has been used as well.

It was reported that places could use a high-grade magnet to charge the seeds and allow them to hold on to the bun using static electricity.

It seems like a lot to do for a bun, but it’s interesting and it works.

Someone must have been quite enamored with the relationship between the sesame seed and bun to even contemplate such a feat. 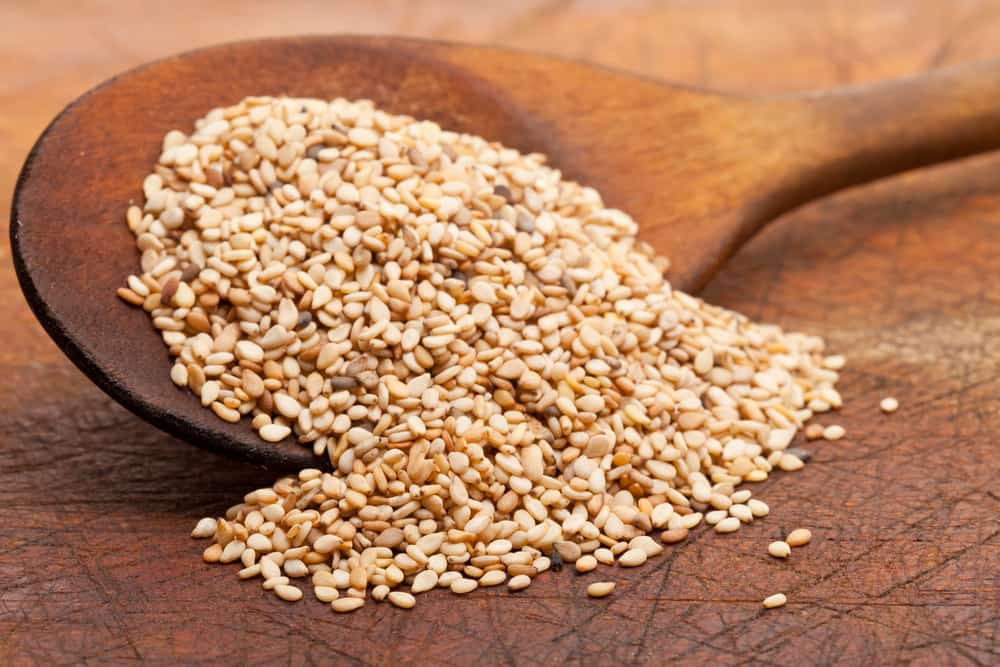 Yes, they do in a sense.

They add a nutty, sweet taste, but in a light way.

If they are placed atop hamburger buns, the flavor is almost unnoticeable.

If you use it in tahini or another recipe that doesn’t have any strong flavor, they will lend a nutty, sweet flavor.

How they mingle depends on the strength of the flavors they are mixed with.

They show off their flavor when incorporated in light oils.

Is There Only One Type Of Sesame Seed? 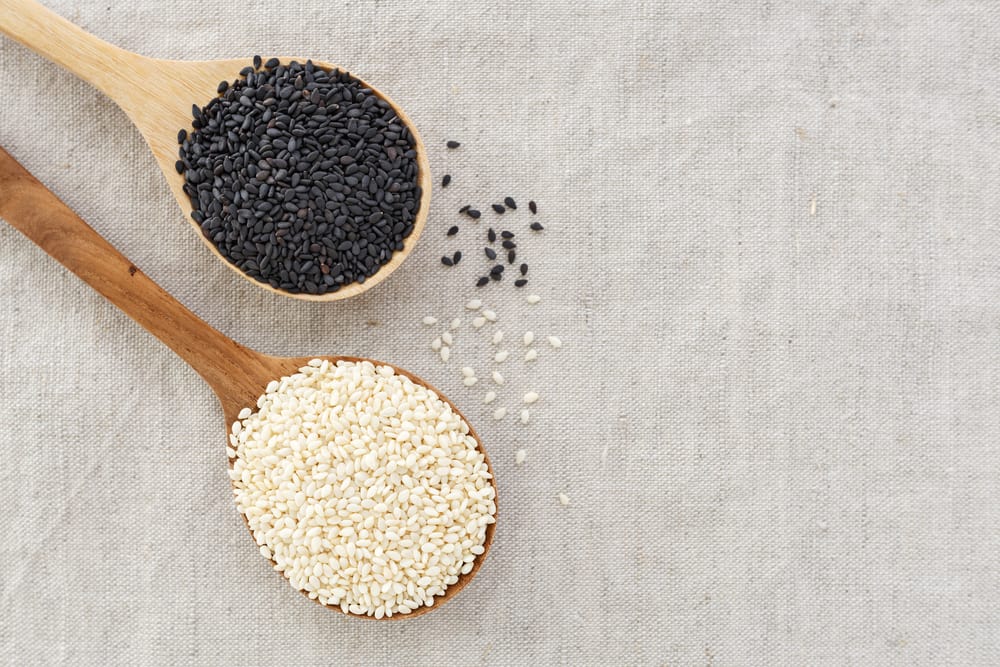 No, there are two types.

The white sesame seed is the light, nutty, sweet, flavored one and the ones you see on hamburger buns.

There are also black sesame seeds, and they lend a more bitter taste.

How Do You Release The Flavors Of Sesame Seeds? 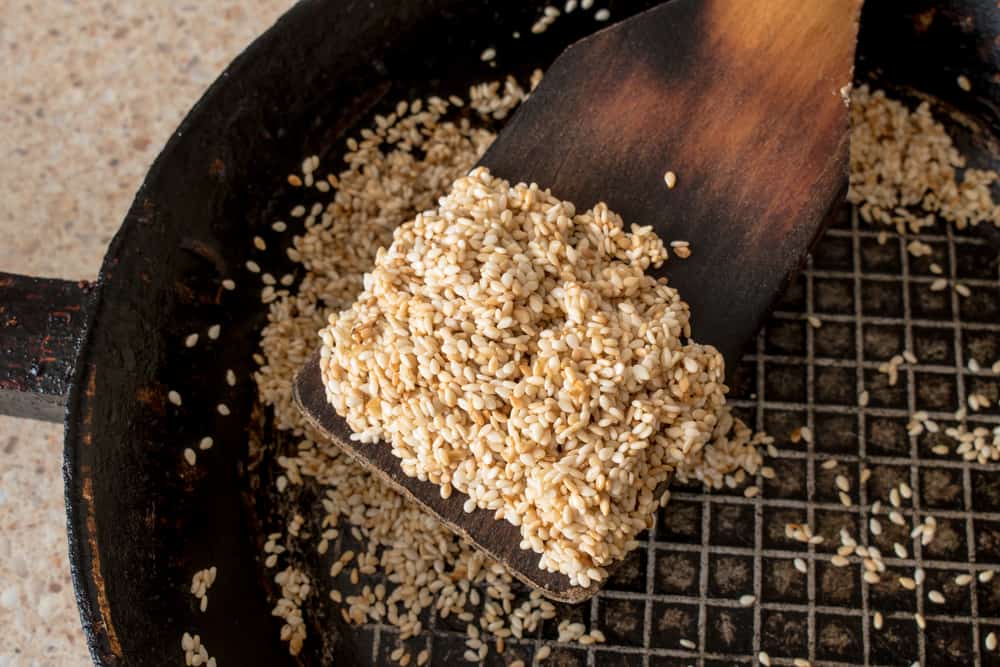 You release the flavor of sesame seeds through cooking.

There are two ways to do this, and both methods are quick and actually toast them rather than cook them in the traditional way.

In a pan, you can add them dry over medium heat while stirring every now and then for three to five minutes or until you can see them turn a golden, brown.

The second way is in a 350-degree (F) oven, turning every few minutes for eight to 15 minutes until they are a golden brown color.

What Can I Put Sesame Seeds On Besides A Bun? 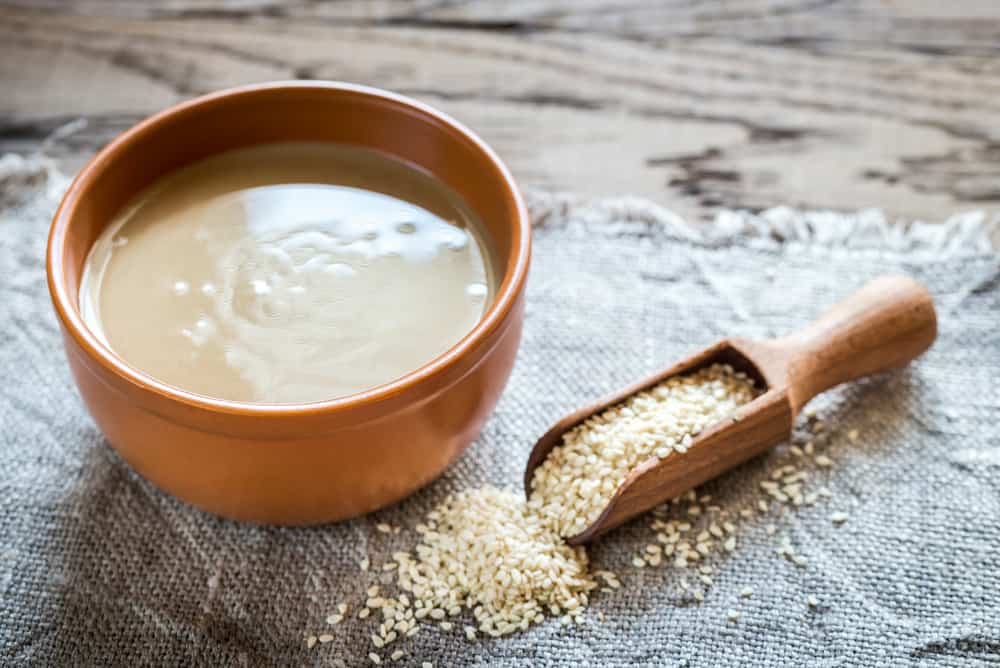 Sesame seeds can be used as a condiment or in a paste like tahini.

You can use them in both savory and sweet dishes, in soups, in any stir fry dish.

Any baked goods can be enhanced with sesame seeds.

Beef with sesame seeds is another popular one.

Strips of beef with bell pepper, bean sprouts, celery, honey, and soy sauce are sauteed together with sesame seeds strewn throughout.

How Do I Buy And Store Sesame Seeds? 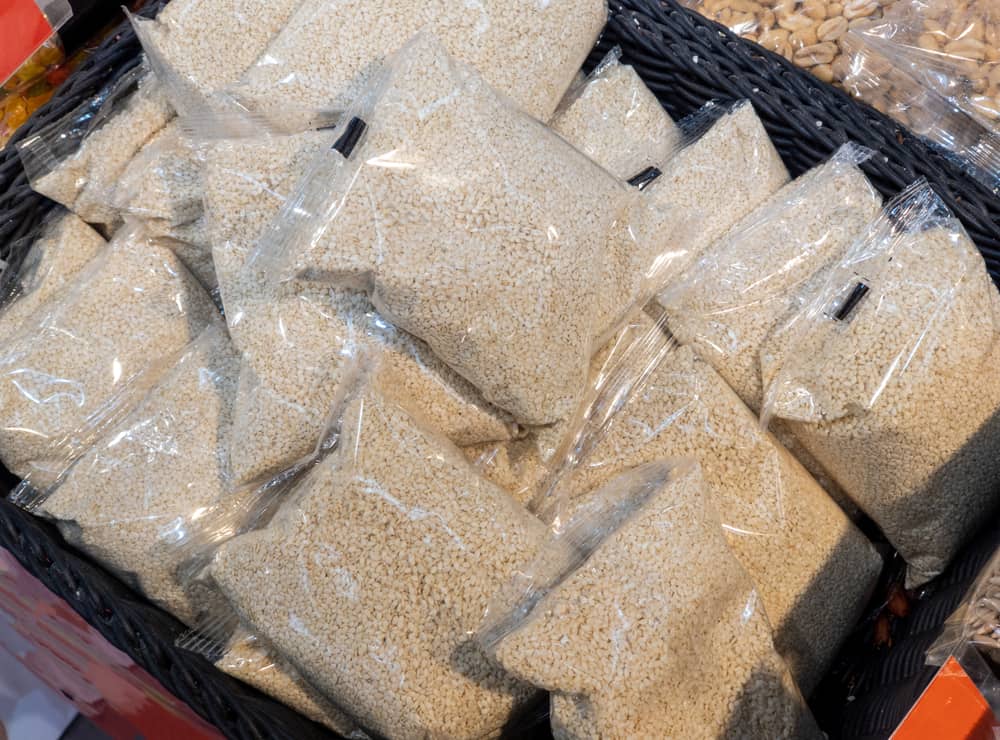 Buy them from any grocery store in plastic bags or bottles.

Buying smaller quantities is best if you don’t use them daily because they will go rancid fast.

If you do have use for them in bulk, you can get them in a Middle Eastern store, a bulk grocery supply, or health food grocery.

You should store them in an airtight container in a cool dry place away from heat or direct light or sunlight.

What Is The Nutritional Value Of Sesame Seeds? 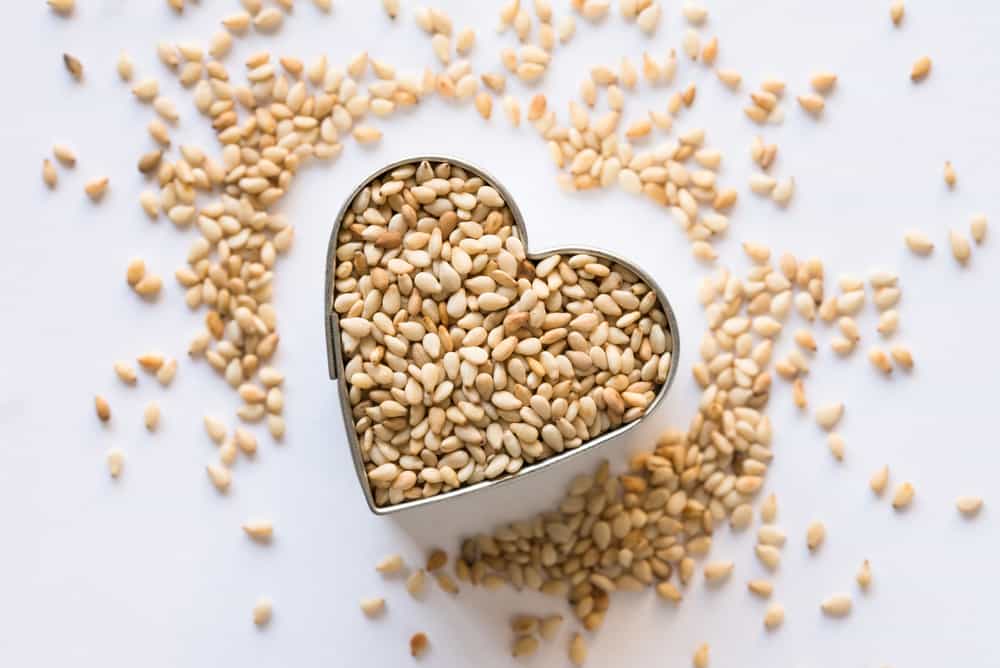 We don’t get enough minerals from our foods due to poor soil.

Copper is a top mineral that sesame seeds are known for.

They are also a great source of several other minerals that are important for health, such as iron, magnesium, calcium, phosphorus, and manganese.

How Do I Make Tahini Out Of Sesame Seeds? 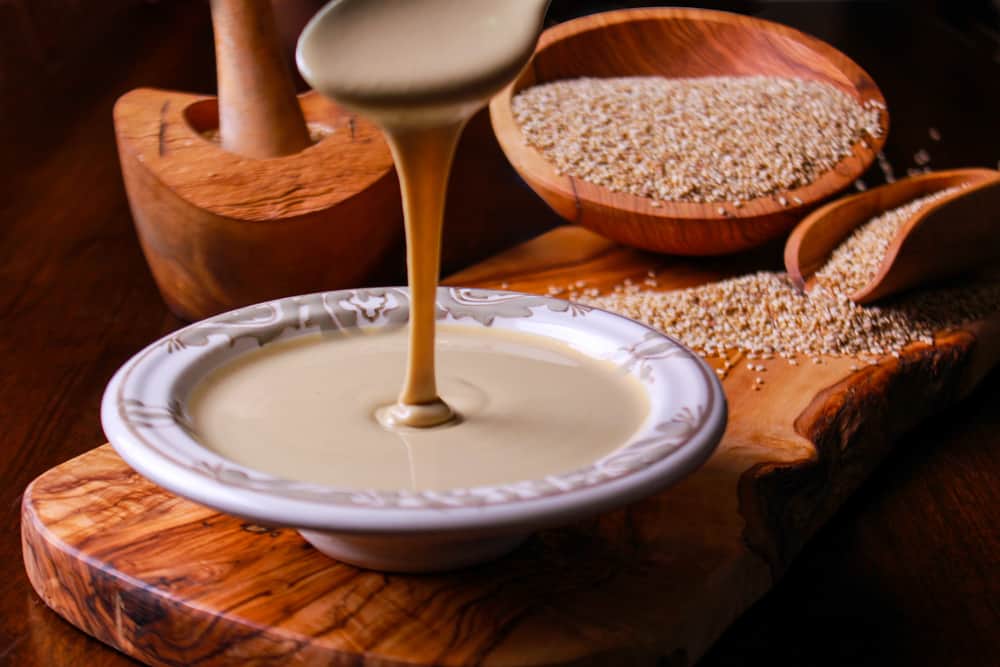 Tahini is the easiest recipe ever.

A child that is responsible enough to go into a kitchen can do this with a parent just supervising.

That is how easy Tahini is.

Tahini is used in many Middle Eastern dishes.

The most popular ones you may have heard of or even tried are baba ghanoush and hummus.

There are a plethora of dishes that use this tasty paste. 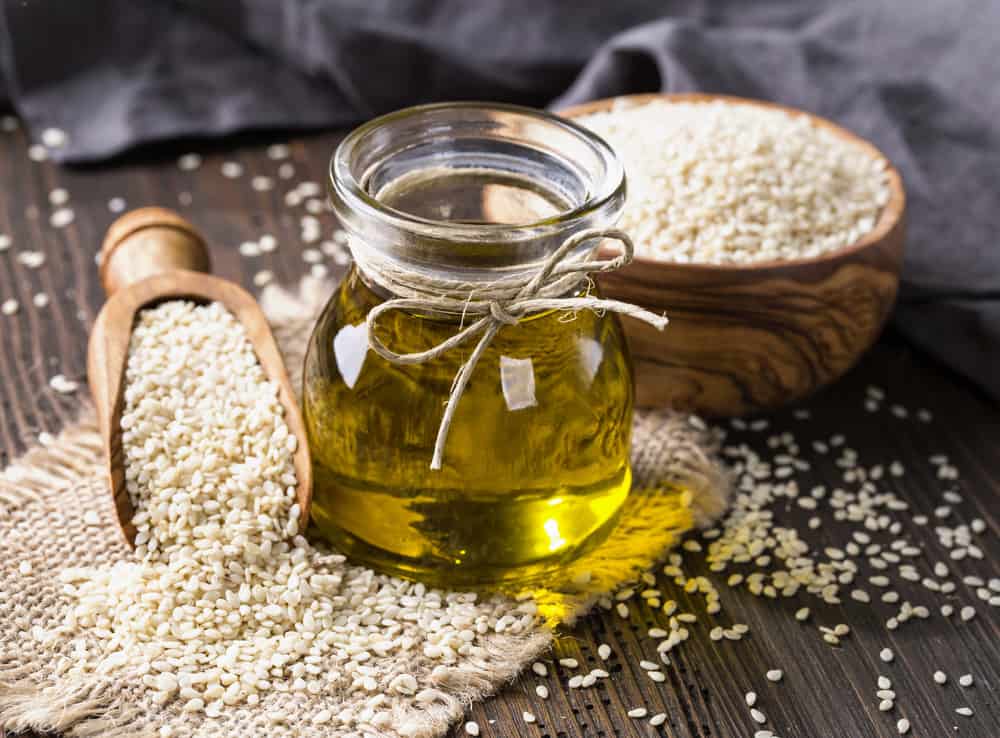 Take the seeds and lightly toast them in the oven at 350 degrees for five minutes, turning once or twice.

Don’t let them get brown or at least not too much.

You can also do this in a frying pan for a bit less time over low heat, not medium heat as we said before, and remove them before they turn brown or just as a light golden color starts to emerge.

Once off the heat, let them cool completely for 20 minutes.

Take out the blender or food processor.

On the setting for sauces on the food processor or pulse or low-speed blend on a blender, pour in the five cups of sesame seeds.

Now, gently and gradually pour in the 1½ cups of olive or other vegetable oil.

Make sure you blend until the mixture is thick but still pourable.

You can even use sesame oil, but otherwise, olive oil is recommended.

Olive oil will amplify the already nutty flavor that you want in tahini because the dishes that it’s put in are specifically made for that flavor.

Using a common vegetable oil like corn oil can skew the flavor.

Some sesame seed batches don’t come with a proper punch of flavor, so a deep green, extra virgin olive oil, first of the season, is best for enhancing any nutty flavor that will last through the cooking.

What Are Sesame Seeds In Chinese Cooking? 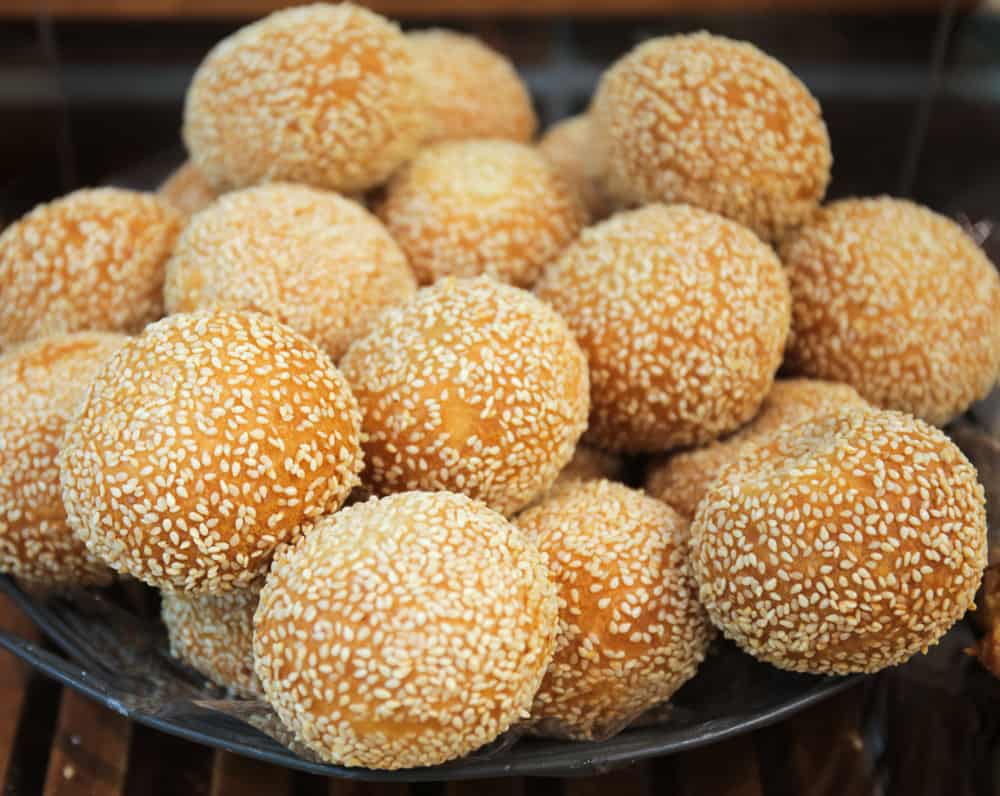 The sesame seed is a flowering plant and the seeds come in a tidy little pod.

They boast the highest oil content of all the known seeds on the planet, and that’s the attraction for using it in a variety of recipes from around the world.

Perhaps the Chinese use it even more than anyone else, both the white and black varieties, in many recipes.

Sesame oil is also used in a complement of massage and aromatherapy oils in the East as well as here in the West now.

The oil is plentiful and not as expensive to extract and bottle in larger quantities as some of the other preferred oils used for this purpose.

It’s the best oil to cut other oils with.

The Chinese will use the sesame seeds akin to how they use it in the Middle East and grind them into a paste with oil as in the tahini recipe.

The difference is that the Chinese are fans of the toasted sesame seed.

They make the sesame paste by pulverizing the toasted seeds and then creating a paste.

One of the most popular dessert items on the Chinese menus that offer Dim sum are the Chinese Sesame Seed Dessert Balls called Jian Dui.

Below is a quick recipe.

Understand that you do need to deep fry them and turn them constantly.

Shallow frying will not work as the balls need to be submerged in the oil in order to expand. 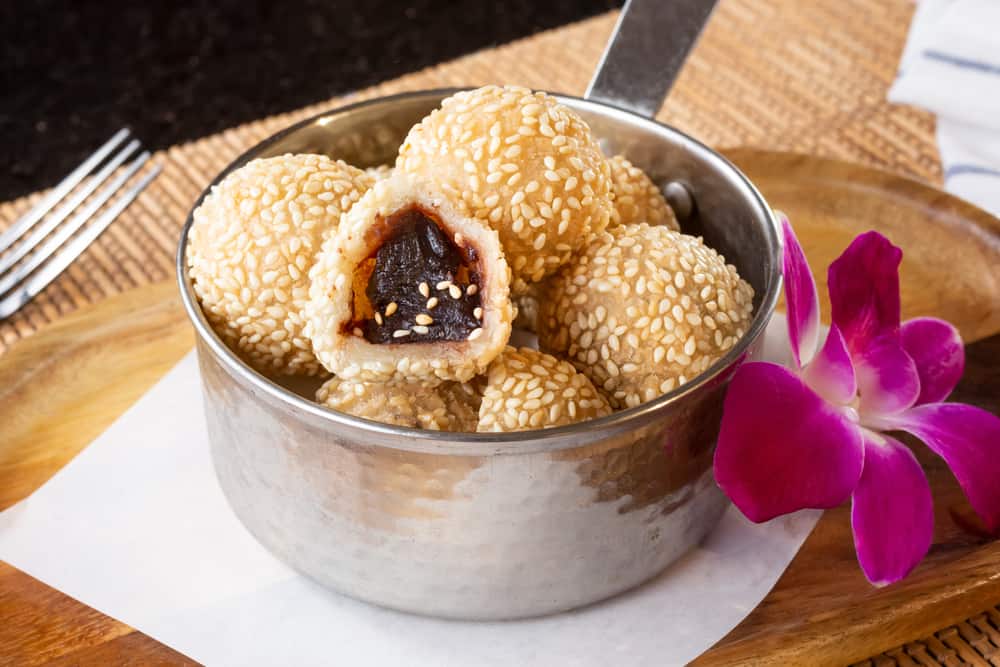 6 cups of vegetable oil for deep-frying, so choose one with a low smoke point.

You can use more if you like or less.

We recommend ½ cup or more.

You may or may not use it all.

It’s better to have more than less because you can’t safely stop the cooking process to augment the ingredients.

Choose a wok or a very deep pan that can easily hold three inches of oil.

Bring the oil to 250 degrees Fahrenheit.

Make sure you have a thermometer.

This can be dangerous, so no kids, animals, or anything that can cause an accident should be in the kitchen with you.

In fact, make sure you are wearing shoes that cover your feet entirely and with good traction as oil can splatter onto the floor, and you can slip.

Take the sesame seeds and spread them out on some parchment paper.

Dissolve the brown sugar in one cup of boiling water.

Put the rice flour in a bowl and make a hole in the middle.

Gently and slowly pour the melted brown sugar into the well.

Mix the rice flour and the sugar together until you have a paste.

Now, to make the balls.

Pinch a golf ball size piece of dough off and shape it into a cup by making an indentation with your thumb.

Make it a bit deep and then fill it with the bean paste in the hole.

Make sure you cover the paste with the dough, even if you have to add more dough to totally encase it.

Dip each ball into some water and roll it gently in the sesame seeds.

Make sure you don’t start putting them into the oil until they are all dipped into the sesame seeds.

You want the cooking time to be even.

Place the balls in the oil and then, as they turn brown, with a spatula, press each ball to the side of the pan.

Watch them as they expand to about two to three times the original size.

Why Are Sesame Seeds On Buns? (Everything To Know)