You are here: Home / The Cold Spotlight / Why Are NFL Tickets So Expensive? (Top 10 Reasons) 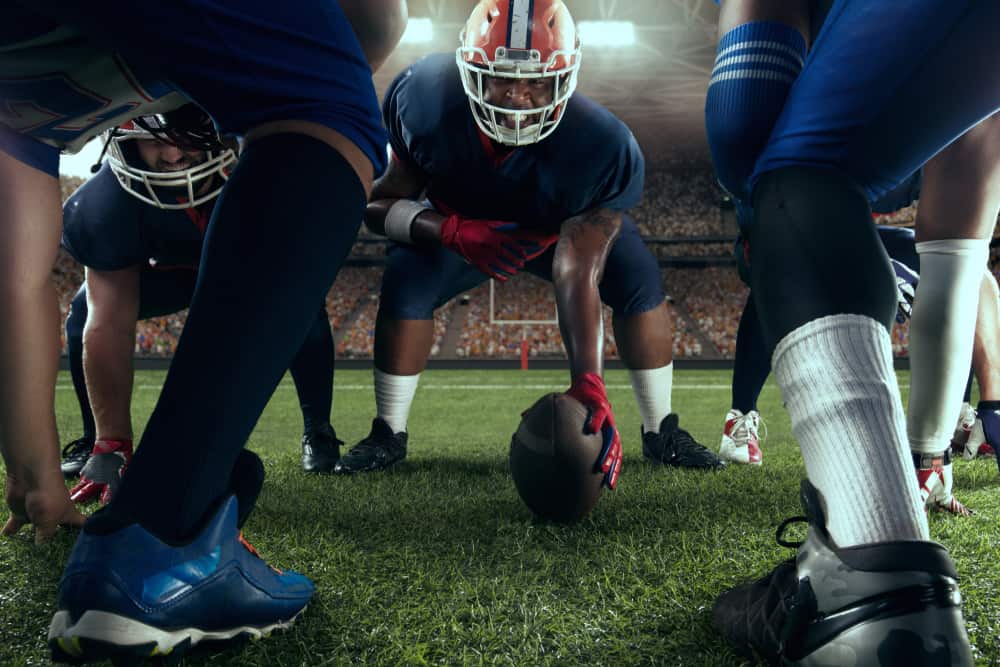 The popularity of football has grown along with the ticket prices.

Why are NFL tickets so expensive?

Why Are NFL Tickets So Expensive? (Top 10 Reasons) 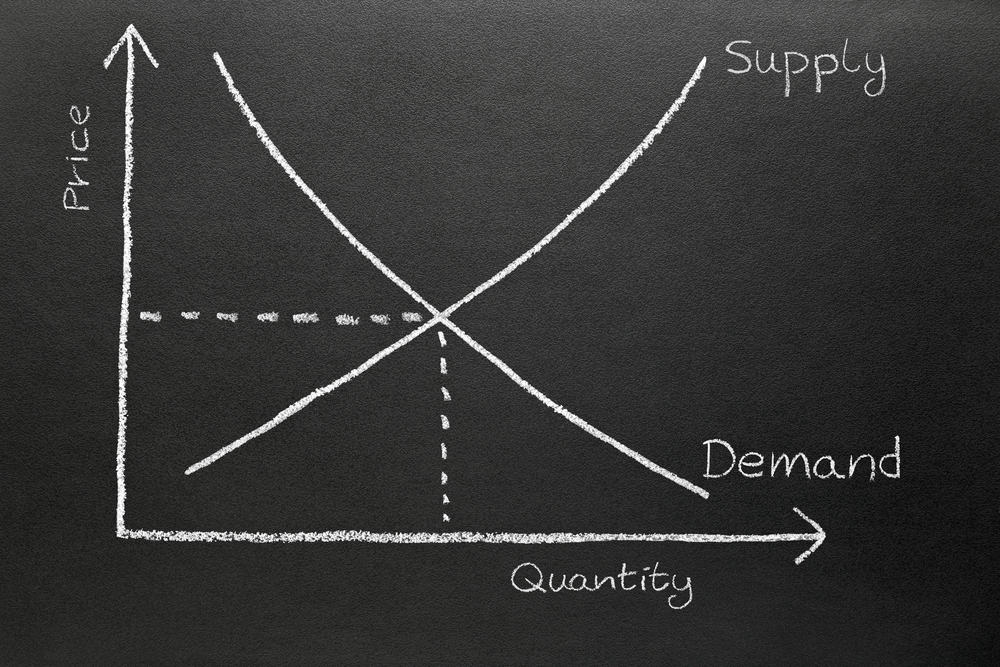 Buyers will treat NFL tickets as a high commodity item as long as more individuals want to buy them than actual tickets are available.

Therefore, as a result of the sport’s popularity and the high demand, NFL tickets are notoriously expensive.

While it might be tempting to place the blame for the high ticket costs on the owners of the NFL teams, it’s best to blame the fans who are willing to purchase tickets at high prices.

If the fans weren’t supporting the demand, then the prices wouldn’t remain high.

Conversely, the demand is lower during preseason games because most starting players (especially QBs) don’t play in the preseason.

Because of this, season ticket holders tend to avoid attending preseason games as well as games against teams with little star power.

As those games approach, you’ll likely be able to find plenty of unsold seats at reasonable prices in the secondary marketplace. 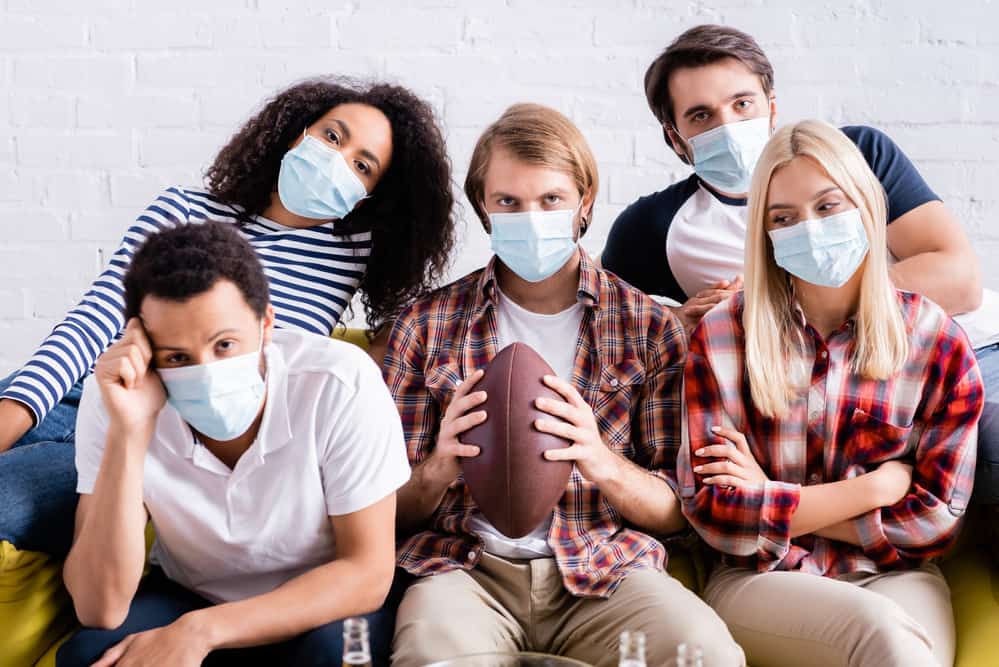 Even though inflation is at a 40-year high, consumers are still willing to spend a lot of money on live entertainment and sports.

People want in-person experiences, especially since they’ve been cooped up for a couple of years without attending large events.

Now, people want to get out of the house and live life to the fullest.

Backing that theory, the United States and Western Europe had a massive 10–20% spike in the savings rate (amounting to a doubling of annual savings in 2020), leaving many households in a strong position to spend money.

The NFL knows that consumers have pent-up demand and they are ready to spend money.

With this pent-up demand post-Covid, NFL owners are raising prices and expecting a significant profit from the increased demand.

Seatgeek, the secondary market platform, reported that ticket prices for future NFL games in 2022 average $307 after the league schedule was recently revealed.

Although this price is lower than last year’s average of $411, it is more than the average of $305 in 2020, when the NFL teams reduced attendance because of Covid.

Before Covid, the average cost of a ticket was $258. 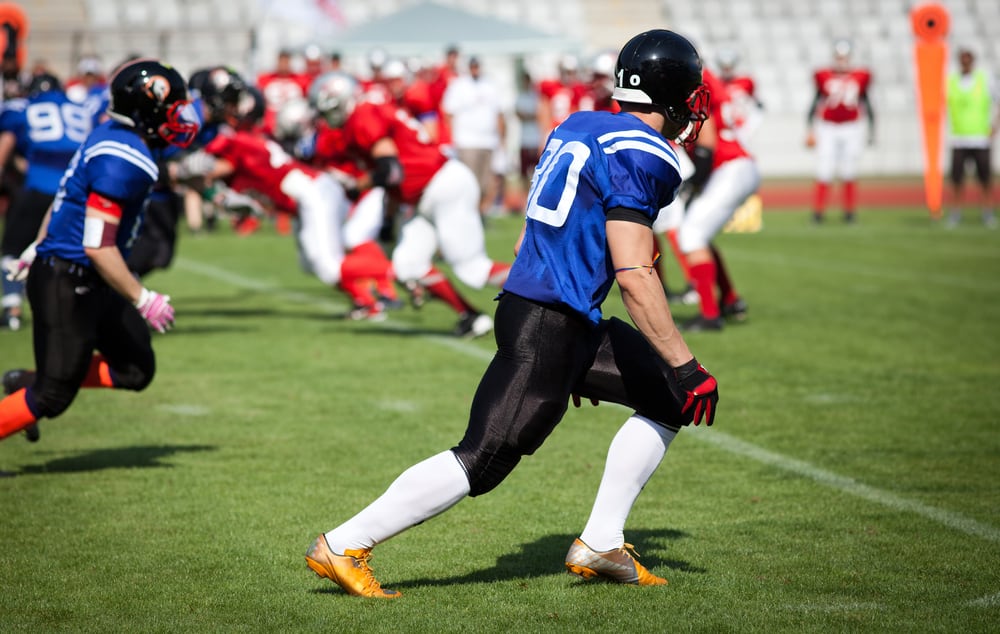 It used to be that the NFL played sixteen regular-season games until 2021 when the NFL increased it to 17 games for each team.

While this may sound like a lot, the NFL plays the fewest games per season of any professional sport.

For example, the NBA plays 82 regular-season games per team before the playoffs, while the MLB has 162.

With each MLB team playing 81 regular-season games in its home stadium, they have considerably more time to bring in revenue from ticket sales than the NFL.

The NFL is lucky if it has ten home games, with some teams only having eight home games

With thousands of fans flooding in once a week, it’s understandable that the biggest league in the country would charge more, even if it’s a little excessive.

In short, the NFL charges high prices for their tickets to make up for the small number of games in their season.

With each team playing just seventeen games a season and salary costs of at least $100 million, clubs strive to maximize the value of every seat in their stadium and every parking space. 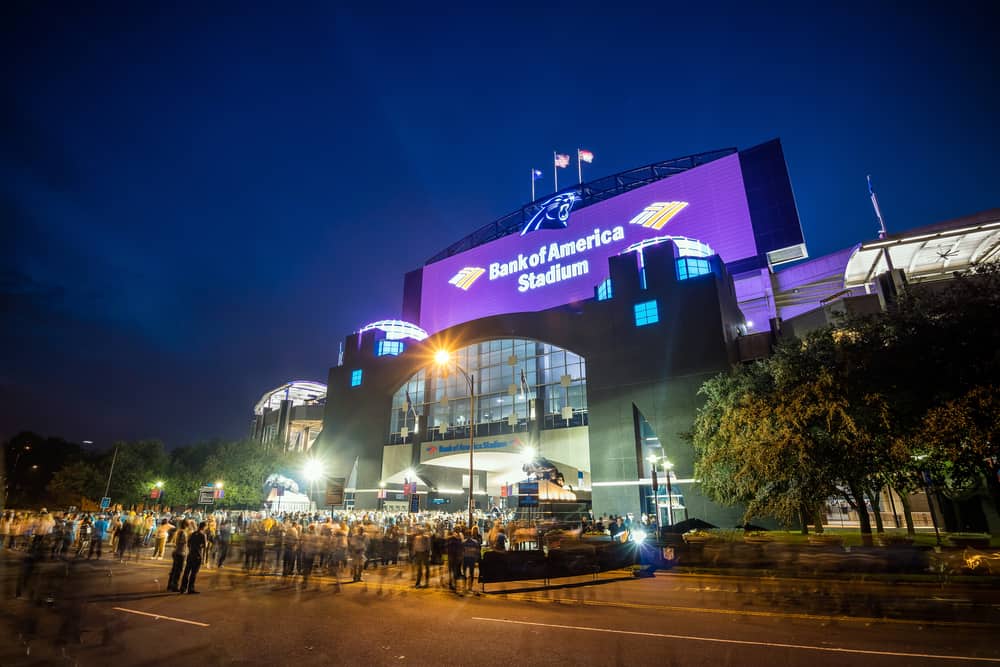 Upwards of 80% of available seats go to season ticket holders.

That leaves roughly 20% of the stadium seats to sell to the general public.

Not only is it hard to find a seat, but the prices of those limited tickets are through the roof.

This is part of supply and demand in economics.

More people want NFL tickets than there are seats.

In addition, the people who want these seats generally have the money to pay the higher prices.

The biggest stadium houses the Dallas Cowboys in Arlington, Texas.

In contrast, Soldier Field, with a capacity of 61,500, is the smallest stadium.

While you might think that Soldier Field would have higher ticket prices because of the limited seating, the Chicago Bears were placed 25th in NFL.com’s power rankings at the end of the 2021 season, with only the Jaguars and Texans below them.

Therefore, the valuation of an NFL team’s ticket prices is based on many things simultaneously. 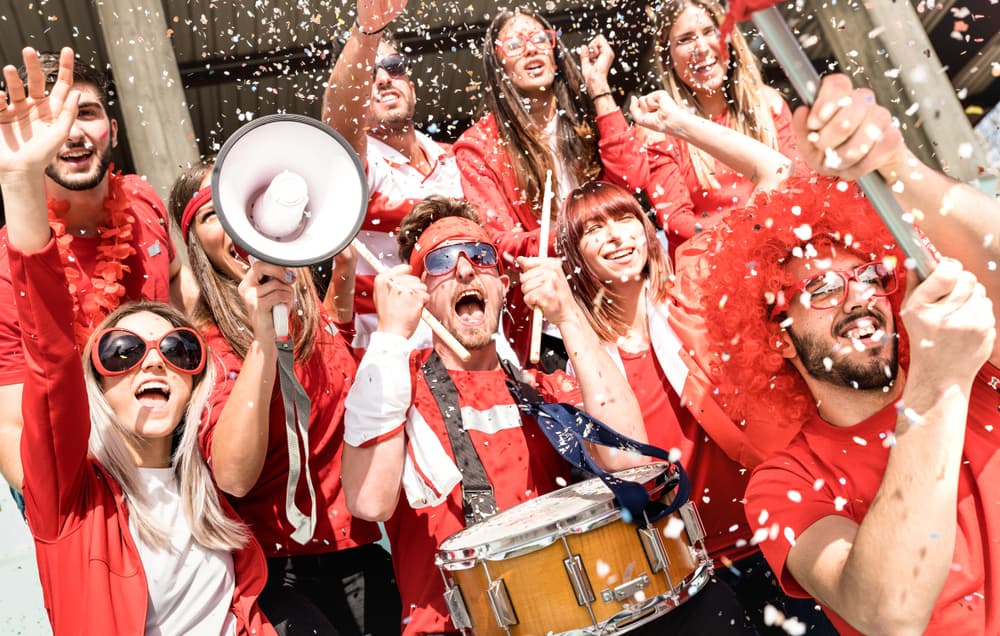 The sheer magnitude of people is the first thing you notice while attending an NFL game.

When there are so many fans rooting for the same team, the noise from cheering can be overwhelming.

The crowd roar may get your adrenaline going when the home team makes a major play.

Unfortunately, you won’t be able to enjoy this while watching the game from the comfort of your own home.

Fans also have a strong sense of belonging.

Sports have a unique ability to bring people from all walks of life together for the same goal.

Another aspect of an NFL game’s atmosphere is the feeling of being a part of something bigger than oneself.

For example, being a part of a crowd that causes the other team to commit a false start penalty or forces the opposing quarterback to call a timeout makes you feel like you’re a part of the game.

Home teams try various things throughout the game to engage and energize the fans.

Their responsibility is to keep the crowd involved in cheering for the home team.

One way that they achieve this is by showing a highlight reel of the team’s best plays before the game.

In addition, music and audio calls from the play-by-play broadcasters often accompany these videos.

When you’re at the game, you can watch any part of the game rather than just the camera view on TV.

Going to the game is your best option if you enjoy observing how the defense moves when the ball is snapped or how the receivers execute their routes.

Attending a major sporting event, such as an NFL game, is unique.

However, because fans want to have this incredible in-person experience, NFL teams can charge more for the opportunity. 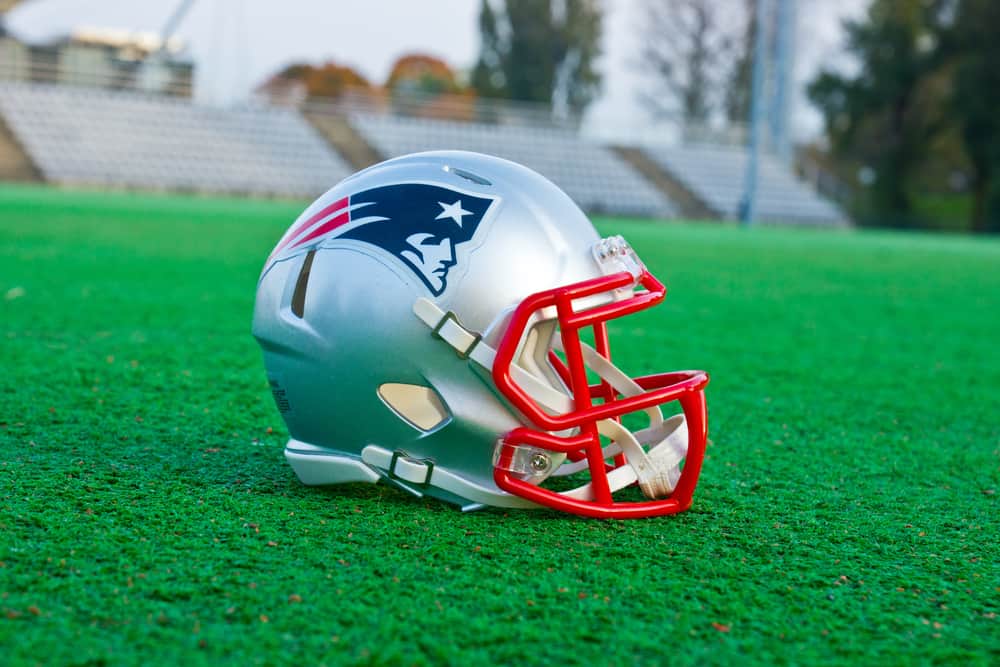 Winning is critical to the financial success of most NFL teams.

Because of the team’s success, the New England Patriots have long had some of the most costly tickets in the NFL.

Based on a team’s success, teams can mark up the ticket price list.

The Tampa Bay Buccaneers, a small market team, had the third-highest ticket price at $513.

Two seasons ago, Tom Brady led them to a Super Bowl victory.

In short, the better a team’s record, the more the NFL can charge for tickets. 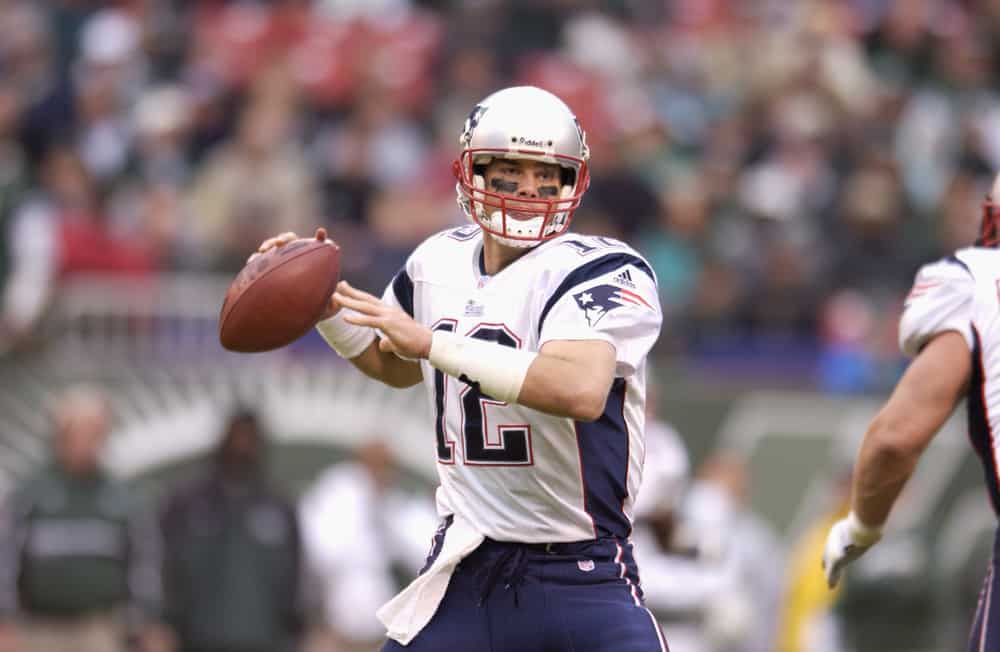 In addition to team performance, a star quarterback can make or break the pre-season excitement for a team.

In short, there’s a definite correlation between high ticket prices and a popular quarterback.

For example, when the Buccaneers acquired Tom Brady in 2020, they raised their ticket prices as much as 15%.

8. Season Tickets And The Rise Of The Secondary Market

According to NFL insiders, a team’s season-ticket holder base is about 80%.

However, in many situations, the bulk of a team’s season-ticket buyers are ticket brokers.

Then the ticket brokers sell the tickets on the secondary market.

For example, SeatGeek is a ticket marketplace where customers may sell their tickets on the secondary market, but it is also the primary ticketing tool for some leagues and venues.

Ticket prices on the secondary market fluctuate significantly more than those on the primary market.

Teams are aware that fans buy on the secondary market.

To get around the exclusivity clauses, teams sell season tickets to brokers, who then sell individual game tickets to fans on secondary market sites.

The ticketing corporation and the venue can only generate money this way.

Season tickets, on the other hand, do not have service fees.

The advantage of the secondary market, however, is that you can almost always use it to get tickets to an event after they have sold out at the box office.

The disadvantage is that they’re likely to be a lot more expensive.

The laws of supply and demand govern this secondary market.

Because there is a limited supply, ticket scalpers can charge a premium for the opportunity to attend the game.

According to TicketIQ, the top five highest average secondary market ticket costs in the NFL for 2022 are:

The Las Vegas Raiders have the most costly secondary market tickets in the NFL by far at $739. 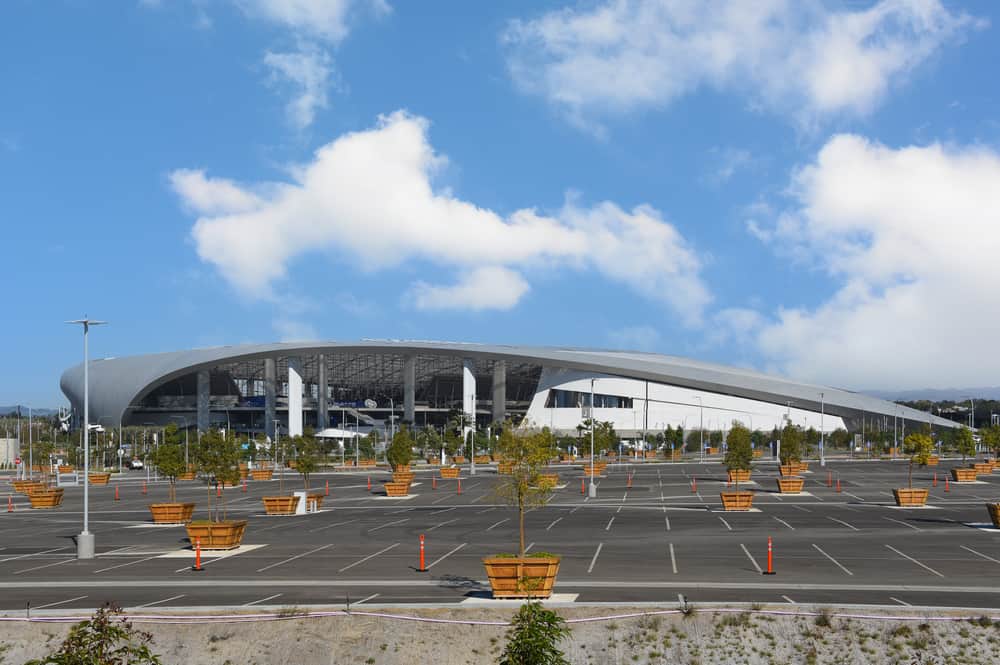 When an NFL team moves into a new facility, ticket costs rise an average of 35%.

In the short term, a new building is lovely, but it exacerbates the problems in the long run by reducing the number of people who can afford to attend games regularly.

Both stadiums opened up for the 2020 NFL season.

SoFi Stadium, which houses both the Rams and the Los Angeles Chargers, debuted in September 2020 after reportedly costing somewhere between $5 billion and $6 billion to construct.

SoFi Stadium is regarded as the first “indoor-outdoor” arena of its sort, having open sides and a translucent ceiling.

The Los Angeles Chargers, with their new stadium, have the third most expensive NFL ticket in 2022, averaging $361 per ticket.

A new $1.9 billion domed stadium for the Las Vegas Raiders was built utilizing a combination of private and public financing after the NFL formally approved the Raiders’ move from Oakland to Las Vegas in 2017.

With the new stadium, the Las Vegas Raiders ticket prices are one of the highest in the league in 2022.

On the secondary market, a Las Vegas Raiders home game ticket at Allegiant Stadium in 2022 costs $595.

The Atlanta Falcons and Atlanta United play in Mercedes-Benz Stadium.

The average ticket price for the Atlanta Falcons the year before they moved to their new stadium was $78.83.

However, when they started their new season at the Mercedes-Benz Stadium, ticket prices soared to $104.08, rising over 30%.

The state of Minnesota paid almost $350 million, the city of Minneapolis paid roughly $150 million, and the team and private donors paid the balance of $550 million.

Ticket prices for the Minnesota Vikings had stayed relatively flat for several years before constructing the new stadium.

While a smaller increase than that of the Atlanta Falcons, it’s still an increase to the faithful Minnesota Vikings fans. 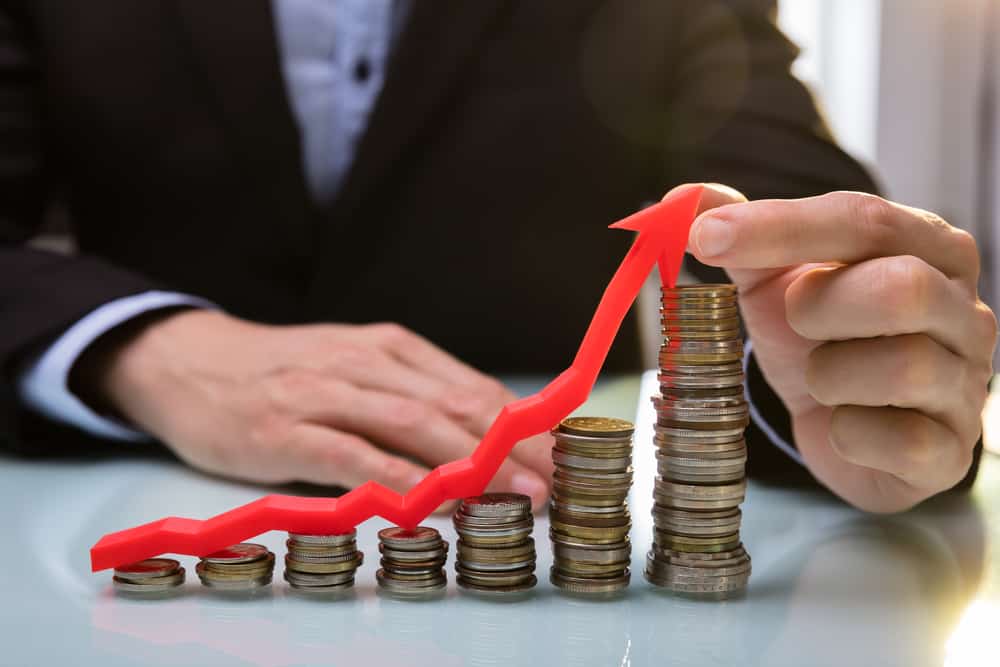 People have adjusted their spending habits as the consumer price index rises at unprecedented rates.

With inflation rates at an all-time high, many consumers are limiting spending on day-to-day items, but not on experiences.

This new focus on experiences means that live sports are in high demand.

With inflation as high as it is, along with the high demand for in-person sporting events, NFL owners can charge pretty much what they want and the fans will come.

As we’ve seen, consumer behavior doesn’t change when it comes to sports expenditures and good times.

Why Are NFL Tickets So Expensive? (Top 10 Reasons)