You are here: Home / Cold Hard Facts / What Is Goat Meat Called? (Everything To Know) 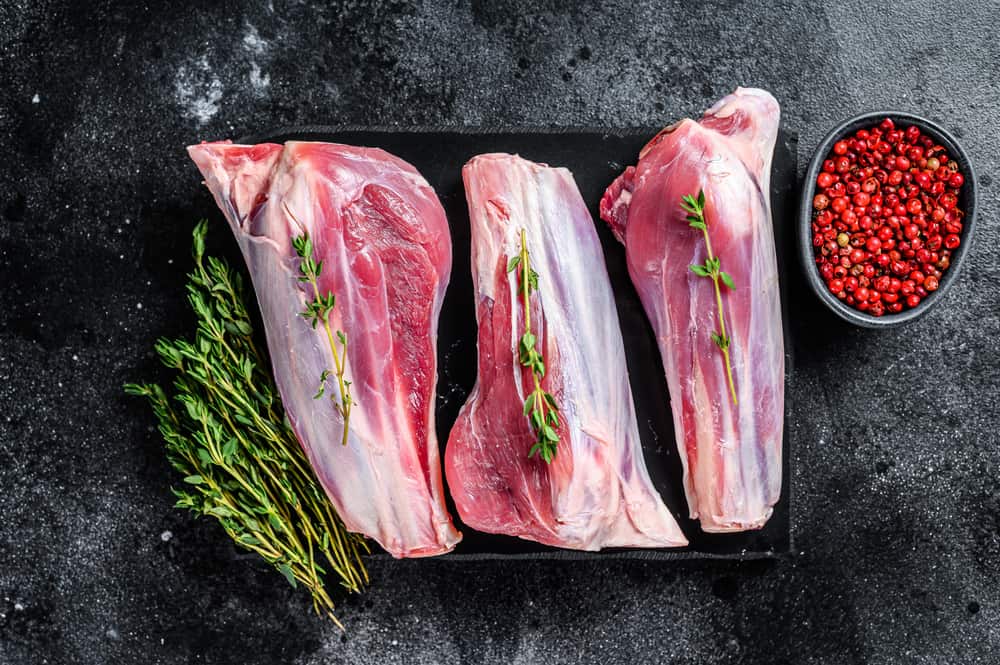 While extremely popular throughout the world, some people prefer to pass on the red meat dish thanks to memories of feeding goats at the petting zoo or farm.

Whether you want to seek out or avoid ordering goat at your local exotic restaurant, you should learn what the meat is called so that you get exactly what you order.

What Is Goat Meat Called? 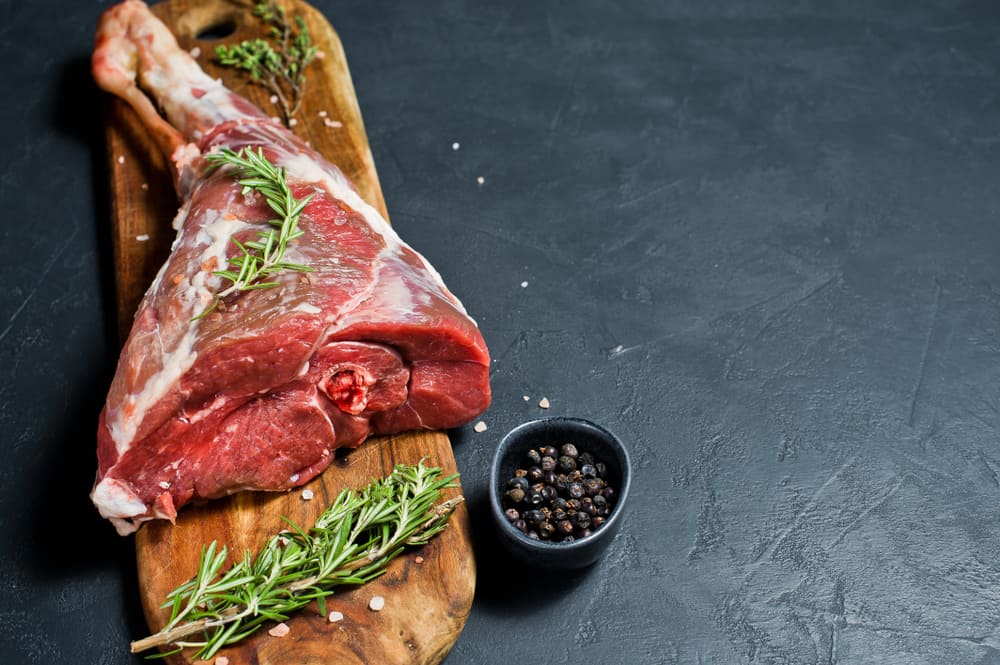 Most Americans call goat meat “goat” for simplicity, but adult goat meat is known as “chevon” in culinary circles.

Italians use the phrase “capretto,” and Spanish/Portuguese speakers say “cabrito” or “chivo.”

In South Asia (especially India) and the Caribbean, the term “mutton” is used the most often.

However, the word can refer to both goat meat and sheep meat.

(For our purposes, we will use “goat” and “goat meat” except for in places where geo-specific phrases better fit the context.) 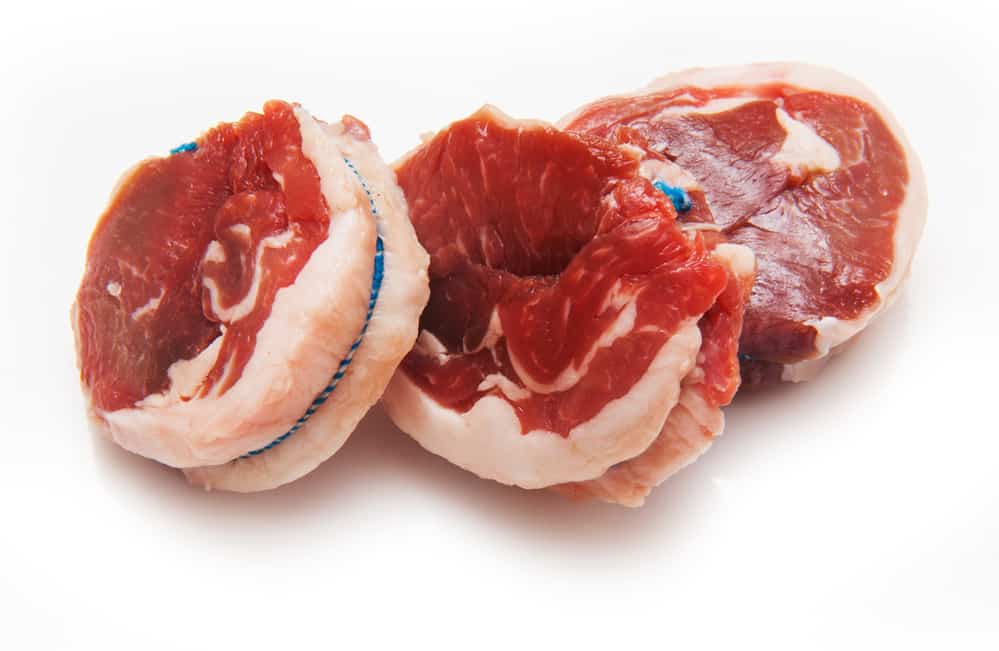 It tugs at the heartstrings a bit to think about a young goat being led to the slaughter for our enjoyment before it even gets the opportunity to mature.

The taste of that meat, though…

Eating goats is extremely ethical thanks to the sustainable and efficient operations compared to other, larger animals.

However, most goat meat you encounter will come from kid goats three months of age or younger.

Kid goat meat tends to be milder and more tender (thanks to the higher fat content) than adult goat meat, making it a more luxurious option.

Of course, you’ll have to pay for the higher quality.

There’s also the matter of depriving a kid goat of the opportunity to grow up.

Kid goat meat is also a highly sustainable meat option, meaning that we save more resources for us humans while getting as much meat as possible.

Farmers also fatten the goats up as much as possible to make the meat tender.

They’re none the wiser while they’re in their food coma.

Standard goat meat has been a staple dinner meat around the world for centuries.

Many countries found a way to feed their families thanks to the inexpensive and high-protein meat.

Adult goat meat will have a stronger flavor and be tougher.

Adult goat meat is mostly used for sausages and chili since it is too tough to be used in other dishes. 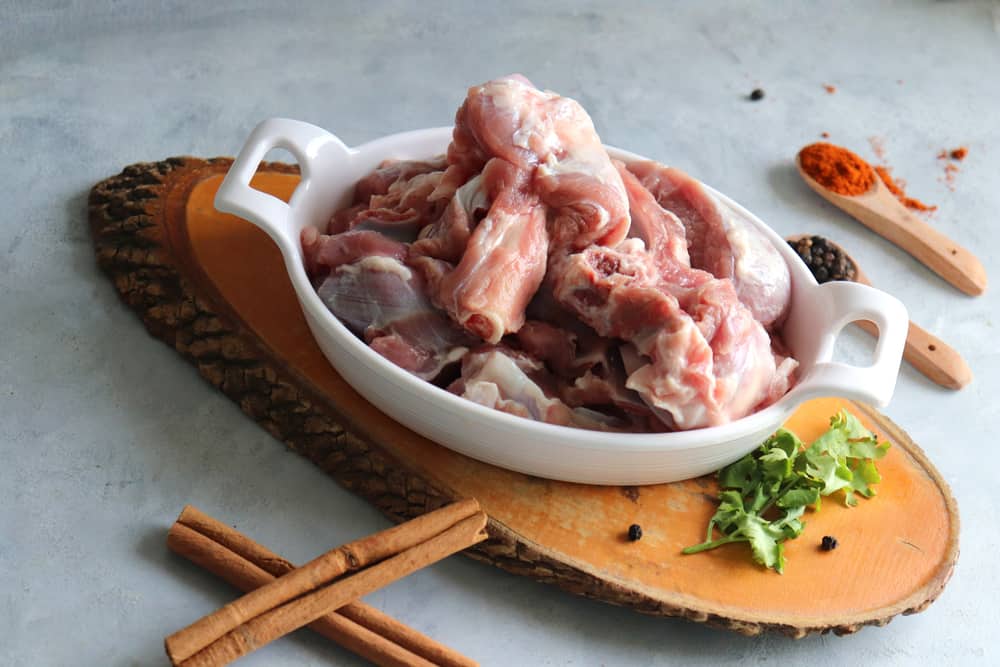 The right cut of goat meat can mean the difference between a successful dinner with empty plates and polite but pitiful smiles with plates full of discarded meat. 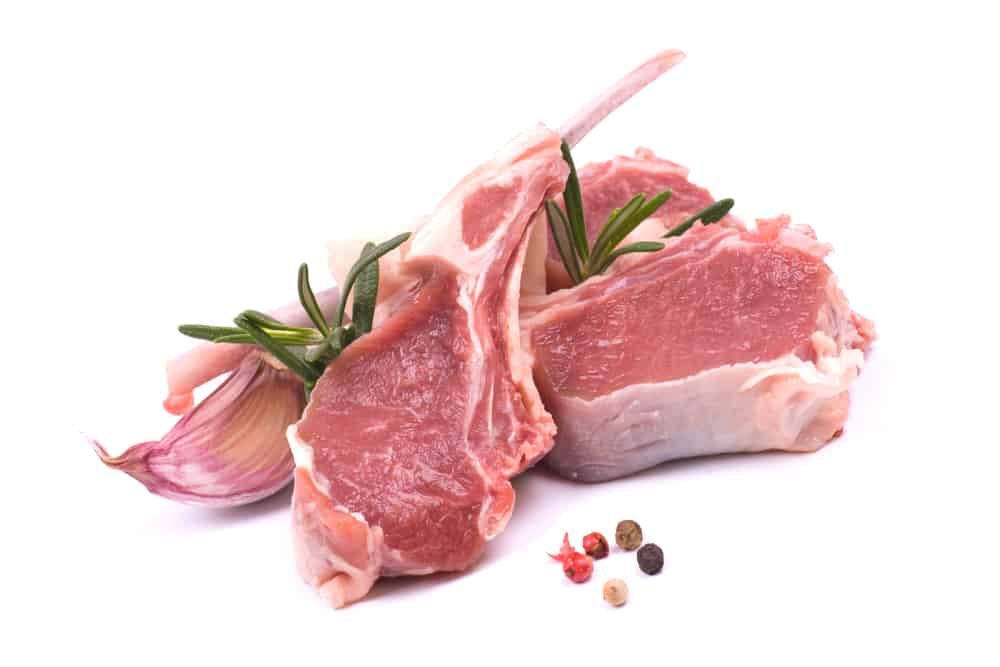 No one would mistake a goat for a lamb while they are frolicking in a meadow.

However, it gets trickier to distinguish these two vastly different animals when they are on the plate in front of us.

Both red meat options are great tasting and full of nutrients, but we will cover some of the main differences so that you can place an educated order.

Goat has much less fat than lamb, making it easy to distinguish between the two pieces of meat.

While it may not sound appetizing at first, the massive amount of white fat on lamb creates a marbling effect in contrast with the ruddy color of the lamb meat.

The fat melts away when cooked, diminishing the scrumptious imagery.

When you bite into the lamb, you will taste the fat in the meat.

A piece of goat meat will have much less fat, depending on the cut of meat, meaning there is little marbling.

Both pieces of meat will look similar once cooked.

It’s easier to tell the difference before it goes on the grill.

For both goat meat and lamb meat, you will find the most (and the tastiest) fat in the muscles.

What meat do you want for a tasty piece of protein?

It all depends on your particular taste, but, when push comes to shove, more people seem to prefer the taste of lamb meat over goat meat.

Both goat and lamb taste great, but they have distinct flavors.

While many factors affect the flavor, such as the cooking method and cut of meat, certain characteristics shine through.

When you bite into a piece of goat meat, you will notice a slightly sweet flavor mixed with a stronger gamey note.

It will also require a knife and a significant amount of chewing thanks to its slightly tougher texture.

Lamb, on the other hand, absorbs the fat content, making the meat tender to the point you may not even need a knife.

Goat is healthier than lamb in numerous ways, but in our humble opinion, the difference isn’t significant enough to sway your food order unless you’re on an unusually strict diet (in which case, you probably shouldn’t be eating red meat anyway).

Both goat and lamb are safe for relatively healthy people to eat in moderation.

With that being said, goat is the way to go if you are making your decision based on nutrients.

It’s one of the leanest red meats available with similar nutritional value and very little cholesterol.

As a comparison, please also see the nutritional content of chicken, considered by most to be the healthiest meat option:

If you prefer the taste of lamb meat to goat meat, don’t deprive yourself.

Swap fatty sides for vegetables and eat small portions to avoid a harsh punishment at the gym the next day.

However, some of us naturally like the taste of goat better as it is, allowing us to eat well and still feel fit.

Tips On How To Cook Goat Meat 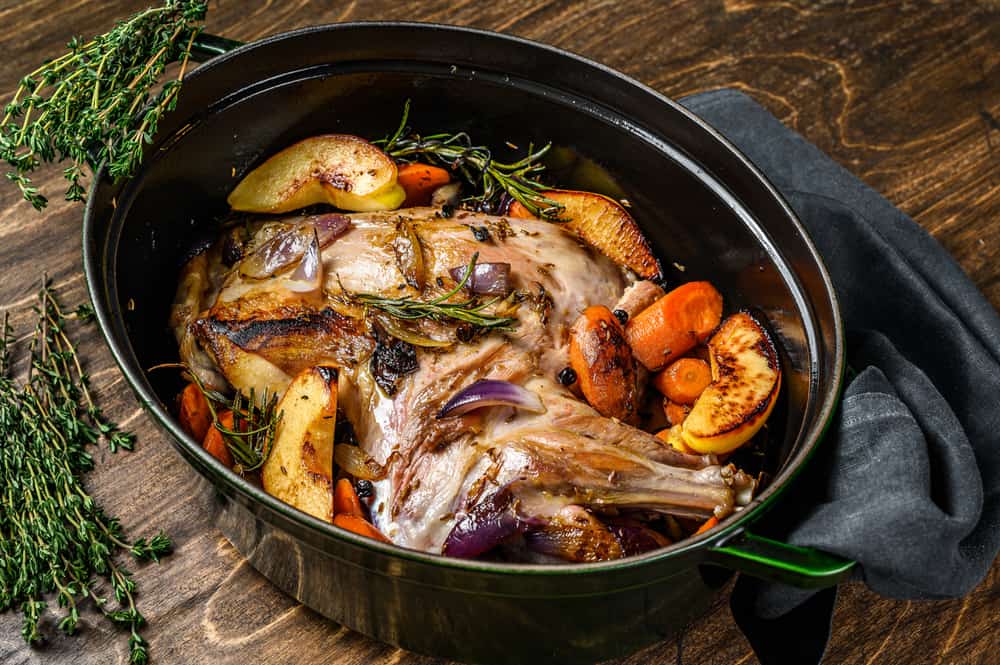 Like most pieces of meat, you can cook goat meat using multiple methods.

Most cooks smoke or grill goat meat, but you can also bake or roast it in certain situations.

The method you choose significantly affects the flavor.

If you aren’t sure of your own preference or those of the other people coming to dinner, experiment with both methods.

Smoked goat retains the flavor especially well thanks to the low temperature.

It’s the preferred cooking method of chefs making a chevon dish, but you can get similar results (without the additional smoky flavors) by baking the goat meat.

People who like the strong taste will appreciate the smoked goat.

The high temperature of grilling dries out the meat rather quickly, taking some of the flavors with it.

It produces a milder flavor.

To prevent the meat from getting dry, use a marinade.

You should also keep the meat away from the direct flame.

Someone who prefers lamb or has picky taste buds may prefer the grilled goat, even if it is a bit dry. 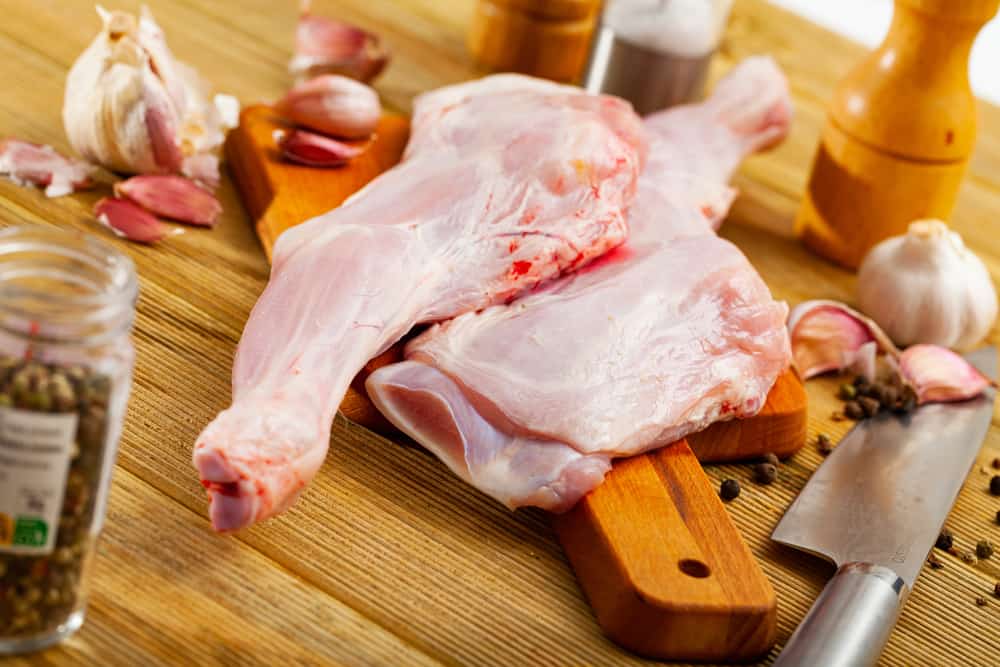 There are a number of dishes that incorporate goat meat.

They come from all over the world, but all provide a delicious way to eat your goat meat and develop your culinary skills.

Put goat into your stew with broth and vegetables for a hearty dish that the whole family can share and doesn’t cost too much.

This versatile option offers a lot of opportunities.

The stew is poured over a plate of rice and beans.

The strong flavors provide you with a unique meal that you can customize to your liking.

Usually served over rice, Indian biryani usually uses the meat from the chest, shoulder, and forearms.

Cut small pieces of meat and put them onto a skewer along with Mediterranean-themed veggies and throw the skewers on the grill until charred.

Once ready, place skewers on a serving plate and let people serve themselves.

A new fad in Chicago-land Mexican food, chefs put a lot of work into the perfect seasonings and cooking methods to make goat tacos (barbacoa tacos) and goat soup (birria).

For a special treat, dip the barbacoa taco into the birria.

The flavors and tenderness of the meat require experience, so unless you’re a good cook, let the professionals give you the full experience.

Similar to any other roast, you will roast a large piece of meat and garnish it with vegetables such as potatoes and carrots.

This is the simplest option, which may appeal to picky eaters.

Easy to cook, you must cut the roast in order to serve it.

Roasting can severely dry out the goat meat if you aren’t careful, so use a thick rolled loin or rack of ribs.

The Popularity Of Goat Meat 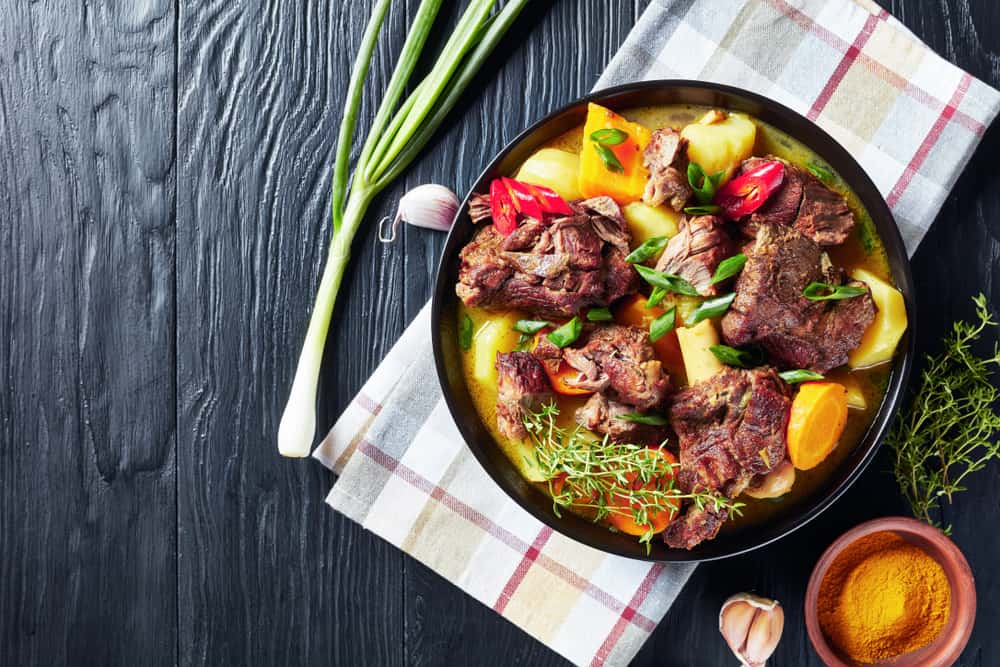 Goat is the most commonly consumed red meat in the entire world with about 65% of the world’s population eating this meat regularly.

Farmers enjoy the inexpensive cost of goat farming and the high amount of product generated as a result.

Goat meat is popular throughout Africa, even used in wedding celebrations as a sign of prosperity and good luck (and to feed all the guests).

Numerous countries in Europe, such as Greece, put goat meal in their dishes as well.

In fact, they raised and enjoyed goats since ancient days and had numerous gods depicted with characteristics of goats.

With this delicious food so close to home, what’s taking so long for America and Canada to reap the benefits? 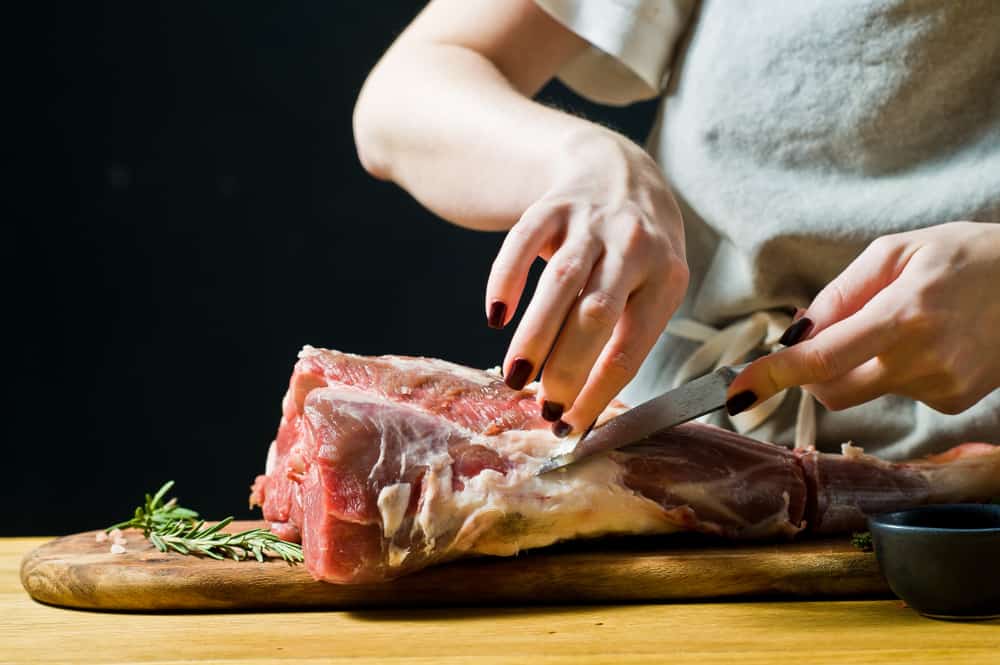 Goat meat popularity may not be so evident here in America, but the United States appears to be catching on.

Goat numbers continue to double every 10 years, at least for the last 30 years.

The trend doesn’t appear to be ending any time soon.

Goat usually appears at high-end restaurants here due to its local novelty, surely generating a lot of money for those restaurants thanks to the almost criminal profit margin for the same quality of meat that sells for a fraction of the price in other countries.

We may start buying goat meat from street vendors, similar to kabob stands in other countries or American hot dog stands, if consumers enjoy the taste and normalize it.

Why would anyone eat a hot dog from a street vendor if they can have a grilled goat kabob?

Well, that depends on whether the hot dog has ketchup on it, but that’s a topic for a whole other article.

Goat meat goes by several names, but as long as you stick to a quality cut of a kid instead of an adult goat, you should give the yummy food a try if you haven’t already.

You don’t even have to worry about cheating on your diet since goat is even healthier than chicken.

However, if you prefer lamb or beef, enjoy whatever food you like.

Just finish your plate so you don’t waste the animal’s sacrifice, and whatever you call the goat meat, call everyone to dinner. 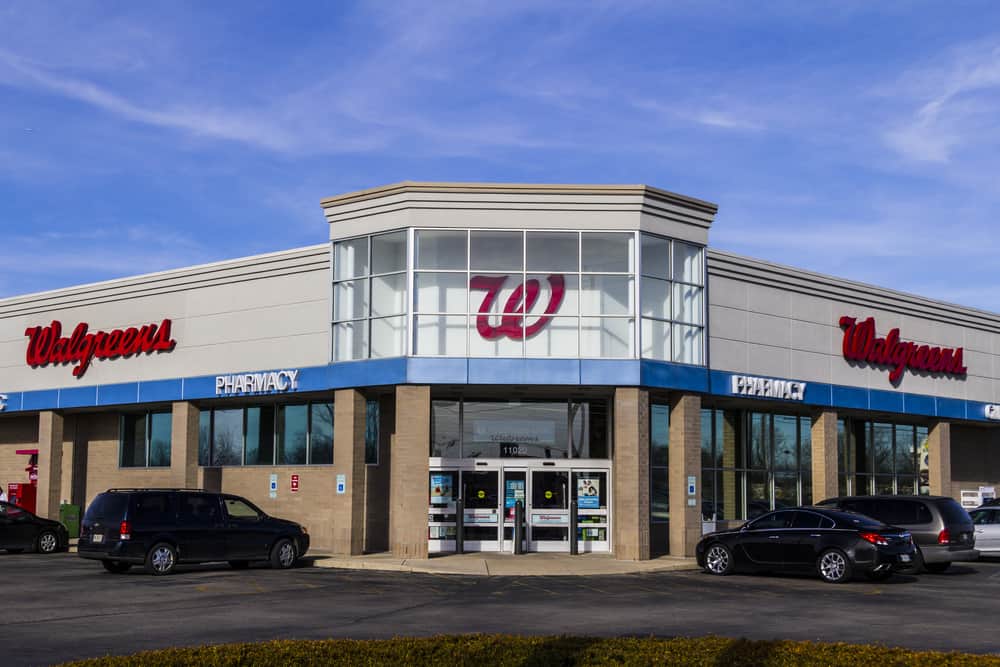 Does Walgreens Do Curbside Pickup? (2022 Updated) 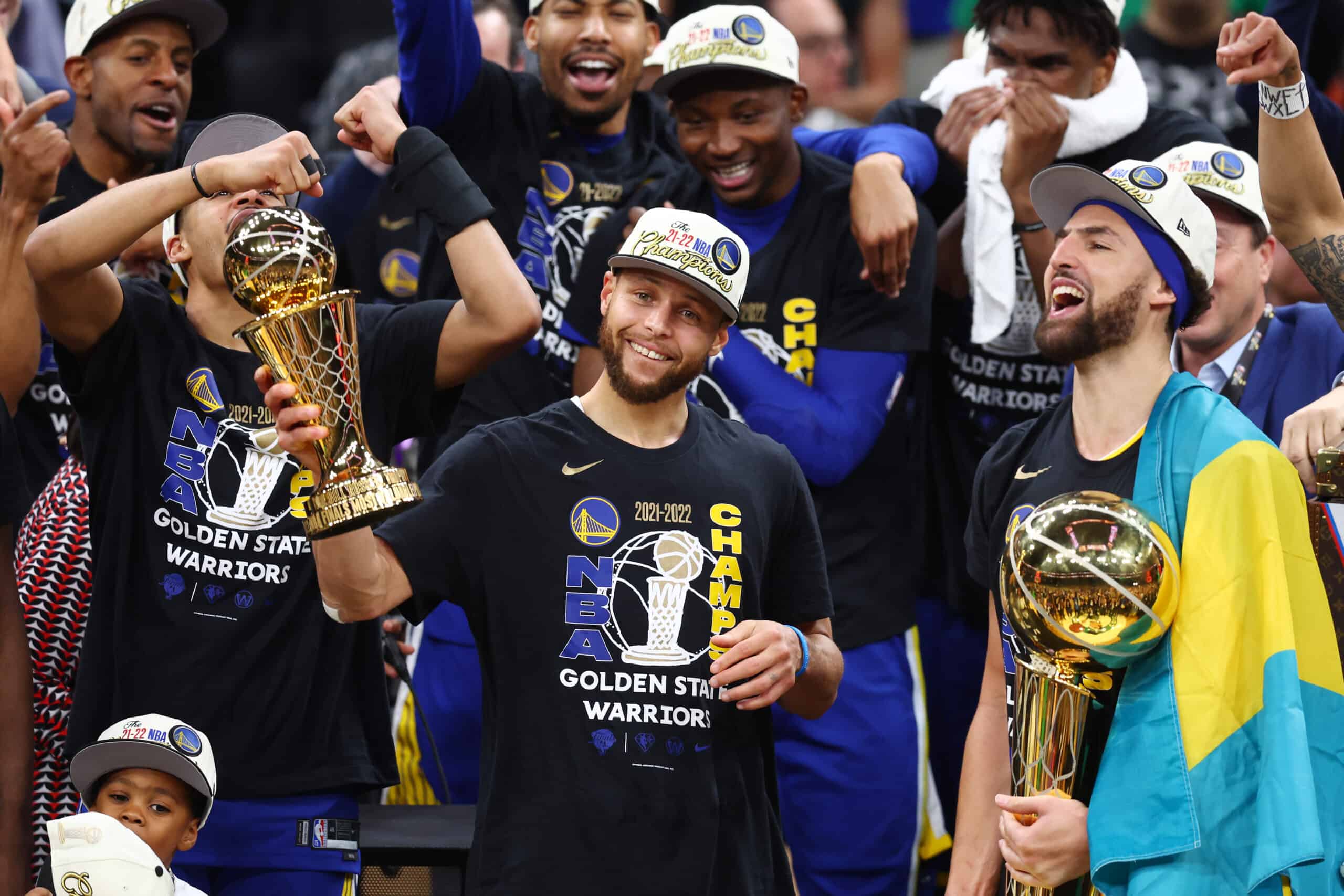 Why Are The Warriors Called The Dubs? (Explained) 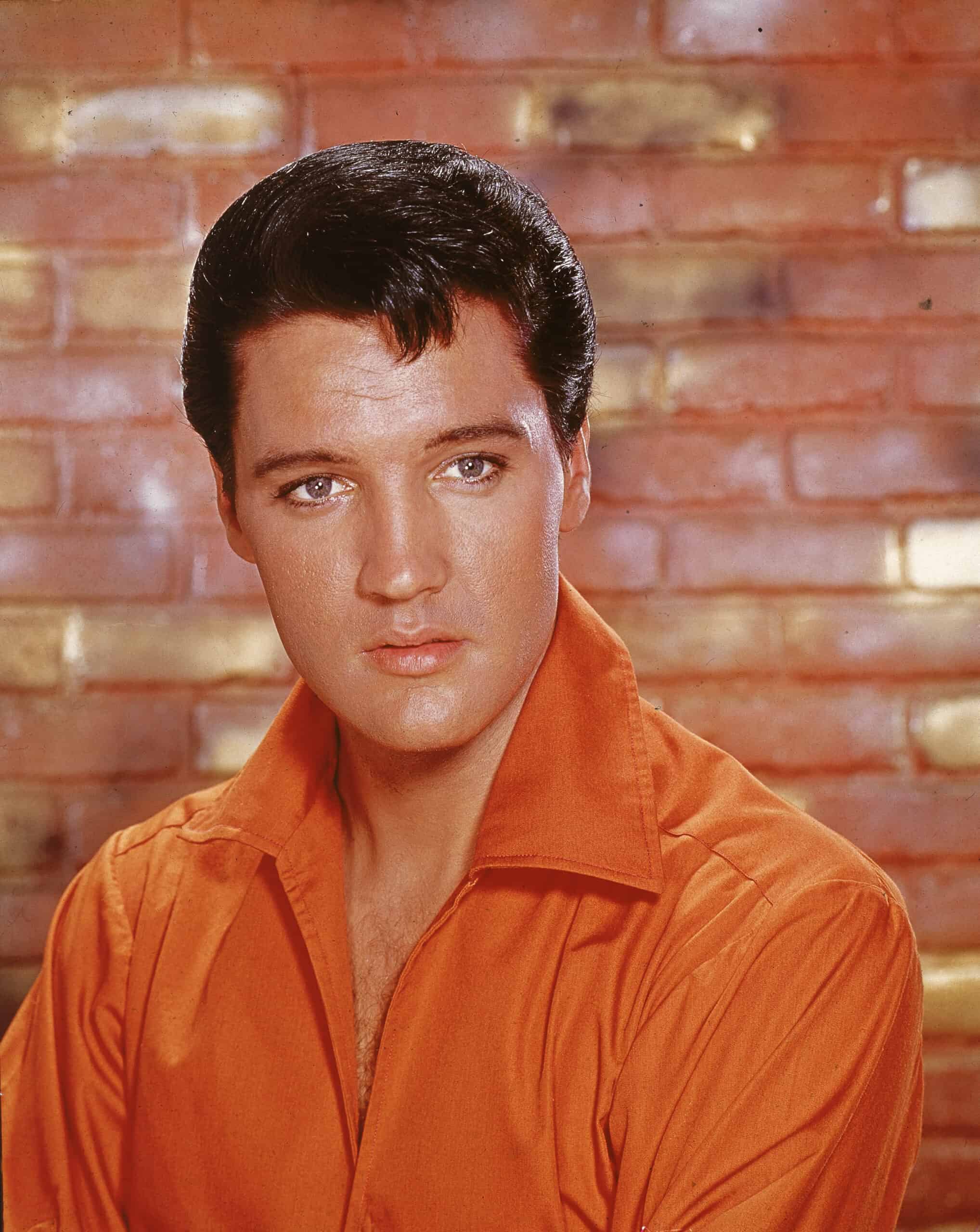 Why Is Elvis Presley So Famous? (Explained)

What Is Goat Meat Called? (Everything To Know)