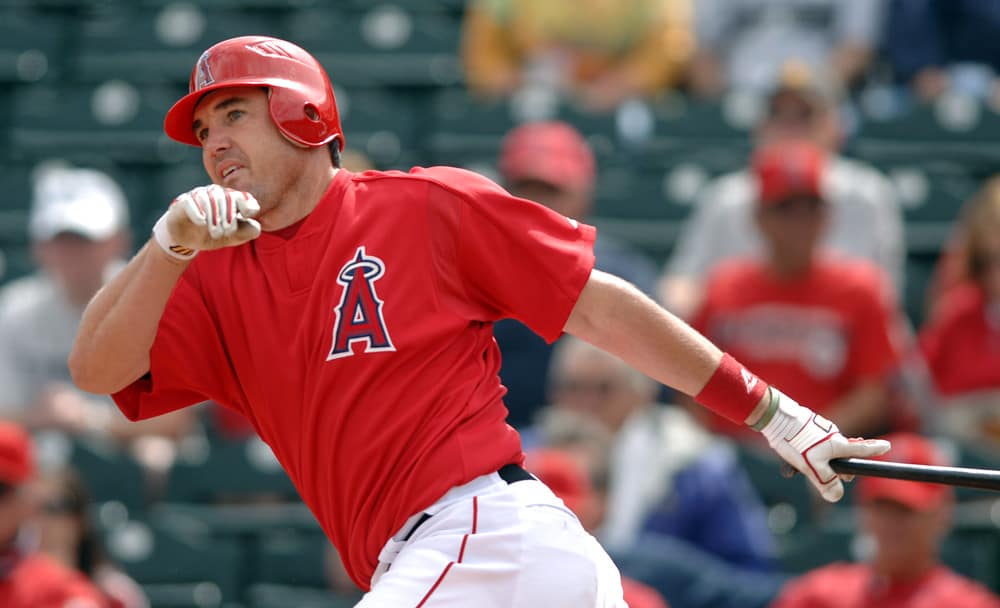 He became a consistent source of offense in the middle of the Angels lineup, being a threat to all opposing pitchers.

During an era with rampant steroid use, Salmon seemed to stay clean.

While being clean, he still put-up solid numbers as an all-around hitter.

He also crafted himself into a well-respected player by Angels fans who look upon his time in Anaheim fondly.

Salmon was an underrated superstar, and it becomes clear just how good of a player he was when breaking down his time in the MLB.

Here is an in-depth look at Salmon’s career, and why he was forced to have a quicker retirement than expected.

Before Mike Trout was even born, there was already a player with a fish-related name developing his career with the Angles.

You mean to tell me tim salmon made his MLB debut — in New York— two weeks after Mike trouts first birthday pic.twitter.com/kzHh4KAQQe

Salmon was drafted in the third round of the 1989 MLB draft by the Angels.

He spent a few seasons in the minor leagues, having his first full MLB season come in 1994.

This earned him Rookie of the Year honors, as he won the award handedly over the rest of the American League.

After the strike-shortened 1994 season, Salmon came back with the best year of his career in 1995.

Though he finished seventh in the MVP voting, the numbers show that he actually deserved more consideration.

His season WAR of 6.6 was actually higher than three of the players who finished ahead of him.

He continued a string of standout out seasons from 1995-1998, where he hit at least 26 home runs each season.

This would prove to be his peak, however, as he never quite reached the same level of production.

Salmon had an injury shortened season in 1999 that foreshadowed some problems that would come later in his career.

However, his true moment as a cornerstone of the Angels’ organization came in 2002 when the team was competing in the playoffs.

After making it into the playoffs as a Wild Card, the Angels fought their way to a World Series matchup against the Barry Bonds led Giants.

On the biggest stage, Salmon shined and led the team.

October 20, 2002:
The Angels tie the series up at one a piece, with Tim Salmon providing two two-run home runs and Troy Percival shutting the door in a 11-10 win of Game 2 of the 2002 World Series. pic.twitter.com/lKhgv6G5JF

In the seven-game series, he hit .346 with two home runs and five RBI.

This was his sole postseason appearance in his 14-year career as the Angels were a very poor team over these years.

However, Salmon made the most of it and helped lead the franchise to their lone championship.

After this, the decline of his career approached rapidly.

Salmon appeared in just 60 games during the 2004 season as he was hampered by injuries.

This continued into 2005 as he was forced to sit out the entire year due to left knee and rotator cuff surgery.

At this point, many doubted that Salmon would ever be able to return to Major League baseball and contribute productively.

However, he worked his way back in 2006 as he won another spot on the team’s roster in a more limited DH role.

He led the Angels in career home runs until this year, as he was passed by Trout during this season.

This was the moment Tim Salmon became the #Angels all-time home run king in 2000. That reign is about to end thanks to some dude named Mike Trout. #GoAngels (via MLB/YT) pic.twitter.com/OgBEB7HhdE

After that season, Salmon opted for retirement as his aging body just didn’t seem to hold up very well anymore.

While he finished his career without ever earning an All-Star appearance, he turned in a well-rounded and productive career as the heart and soul of the Angels franchise.

Injuries ultimately derailed his career, but he left behind a legacy that was bolstered by a championship in Anaheim.

Even though Salmon is retired from baseball, that hasn’t stopped him from being an Angels fan and staying close to the game.

“The transition to life after baseball has been easy because it wasn’t like I went home and twiddled my thumbs,” said Salmon, 42, who delivered the ceremonial first pitch on Friday as part of the team’s 50th anniversary celebration.

“I got so involved in family life that I have never really had time to sit back or dwell or think about what I was walking away from.”

Salmon resides in Grand Canyon, Ariz which is home to lots of Little League parks.

He is currently coaching Little League baseball teams for both of his sons, Ryan and Jacob.

They both are outfielders who are pursuing their dreams as well in sports.

“I tell my kids and all the kids I coach and their parents who think they have the next A-Rod (Alex Rodriguez), ‘Sit back and relax. This is only Little League,’” said Salmon, by phone, driving to his next Little League practice.

“I remind them that there are so many things that play into whether your son is going to be a big-leaguer that you have no clue about. I tell the parents, ‘Let them enjoy the game. It will weed them out as they get through the ranks.’”

Getting through the ranks is certainly something Salmon achieved, along with always leaving a legacy of a champion with the Angels.

Mike Trout Continues To Factor Into The MVP Conversation

The Angels Make It Official With A Key New Pitcher

Angels Kick Off Hot Stove Season With A Big Addition

Angels Have A Pitching Reinforcement On The Way In 2023

The Angels Have A Clear Problem To Fix On Offense

Angels GM Indicates He Can Sign Another Star This Offseason

Shohei Ohtani Iced Out Of 1 Award In Particular