You are here: Home / Sports / NFL / What Happened To Ray Rice? (His Fall From Grace) 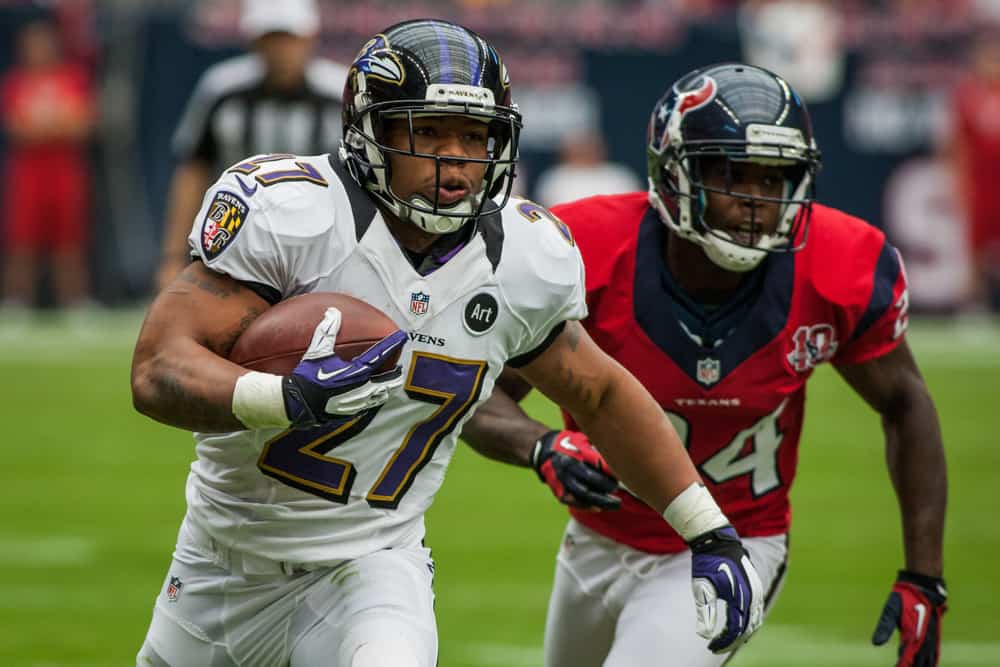 Former Baltimore Ravens Ray Rice was a dynamic dual-threat, capable of outsmarting teams with both his hands and feet.

Disciplined to ride the hip-pocket of a pulling guard, Rice could also connect with his hands on a 20-yard out-and-up.

As the eighth overall running back selected in the 2008 NFL Draft, high expectations followed Ray into the league.

However, rather than remembered for the Super Bowl win, the ex-halfback is tied to a single, off-field, lapse in judgment.

The story of Ray Rice embodies the adage that a person’s past does not define their worth in the future.

Standing at 5’9″ and weighing 195 lbs., Ray was a two-sport athlete lettering in varsity basketball and football his senior year.

With his natural agility, firstly, Rice logged an impressive 1,192 total rushing yards and 9.8 yards per carry as a Huguenot.

Secondly, he averaged 99.8 yards per game and reached the endzone a remarkable 31 times in his final year.

Finally, to cap off a successful high school chapter, Ray helped his team to an 11-1 record and league champs.

His impact on the college football scene began in 2005 and continued through until his junior year in 2007.

Choosing to remain close to family and his hometown, the New York native signed to play at Rutgers in New Jersey.

The prolific running back was an impact on the team and immediately improved the football program.

Named twice to the All-Big East first-team, in his final season, Ray represented the school as a first-team All-American.

In addition, he helped the Scarlett Knights to three consecutive bowl game appearances and their first in almost 30 years.

Ray Continues to Shine with the Ravens in Baltimore

After catching the eye of many teams in the NFL, the Baltimore Ravens claimed Ray with the 55th overall pick.

The eighth running back selected in the 2008 NFL Draft, he signed a four-year, entry-level contract, which was extended through 2016.

Ray answered the challenge, began establishing his slashing run style in the AFC, and eventually making his mark across the league.

Professionally, not only did he lead the league in yards from scrimmage, but Rice also lead the conference in TDs.

Furthermore, the ex-Raven was twice second-team All-Pro, a three-time participant in the Pro Bowl, and a Lombardi Trophy winner.

Let’s take it back to 2012 where Ray Rice did the impossible……4th and 29 conversion, without this we wouldn’t have been SB champs….#RavensFlock pic.twitter.com/DM6MerooGT

In February 2014, Ray Rice and his then-fiance Janay Parker, engaged in a physical altercation at an Atlantic City casino.

Surveillance video recorded the two shouting obscenities at each other in an elevator, followed by Janay spitting in Ray’s face.

Ray dragged Janay’s unconscious body out of the elevator after he struck her in the head.

A grand jury indicted the Baltimore running back on third-degree aggravated assault in March, but the charge was eventually dropped.

A day later, Ray and Janay confirmed their union in marriage; however, it was too little, too late.

Rice’s professional football career was over.

After a two-game, league-imposed suspension, the Ravens released Ray in September 2014, and he officially retired in 2018.

Ray Picks up the Pieces and Moves Forward

The 33-year-old spends his time now as a guest radio-host on Inside Access and coaching high school football at his alma mater.

As the running backs coach, Ray helped the Huguenots to an undefeated 13-0 record and winning the state championship in 2019.

More importantly, Rice works with the NFL and speaks on behalf of their domestic violence education program.

In an interview on CBS This Morning, Ray spoke on a similar incident about Browns running back Kareem Hunt:

“Well, obviously, you know, you look back and you see the similarities. Early on you could feel like ‘Why they keep bringing up my name?’ You can make excuses or you can actually do the hard work.”

Ray related in the same interview how he sees the pain that domestic violence causes, adding:

“I know Kareem has apologized and has expressed remorse for the survivors of domestic violence. And like I said, I’ll continue to do that because I know now from doing the work how gruesome it is.”

A Fresh Start with a New Set of Downs

When asked about returning to football, Rice said:

“Well, see that, that for me is something that I understand why it was being said early on about, you know, is this a ploy to get back into football? And I’ll be…I’ll be the first one to say it. I don’t have to retire to tell you, I’m done with football.”

The Super Bowl champion has no interest in playing football anymore, stating:

“I’ll be honest with you, it…and it’s not the game of football. I love football. I’m coaching. I’m helping out youths. I just feel like the pressure I was under of being a…like, a star, that was the person I hated the most. So I don’t want to go back to being something that, just because it financially took care of me, tormented my life. I want to be in a position now to help.”

Ray now views his life from a new angle and is grateful for his second chance with Janay:

“Somewhere down the line everybody who’s saying, ‘Does he deserve a second chance for football?’ and this, that, and the other…I actually got my second chance.”

Rice was cut in 2014 after hotel surveillance captured him punching his then fiancée. @CBSThisMorning co-anchor @GayleKing sits down with him pic.twitter.com/Fdff1ZVEmI

Terry McLaurin And The Commanders Make It Official

What Happened To Ray Rice? (His Fall From Grace)