You are here: Home / Sports / MLB / Chicago Cubs Rumors And News (Updated Daily) / What Happened To Mark Prior? (Complete Story) 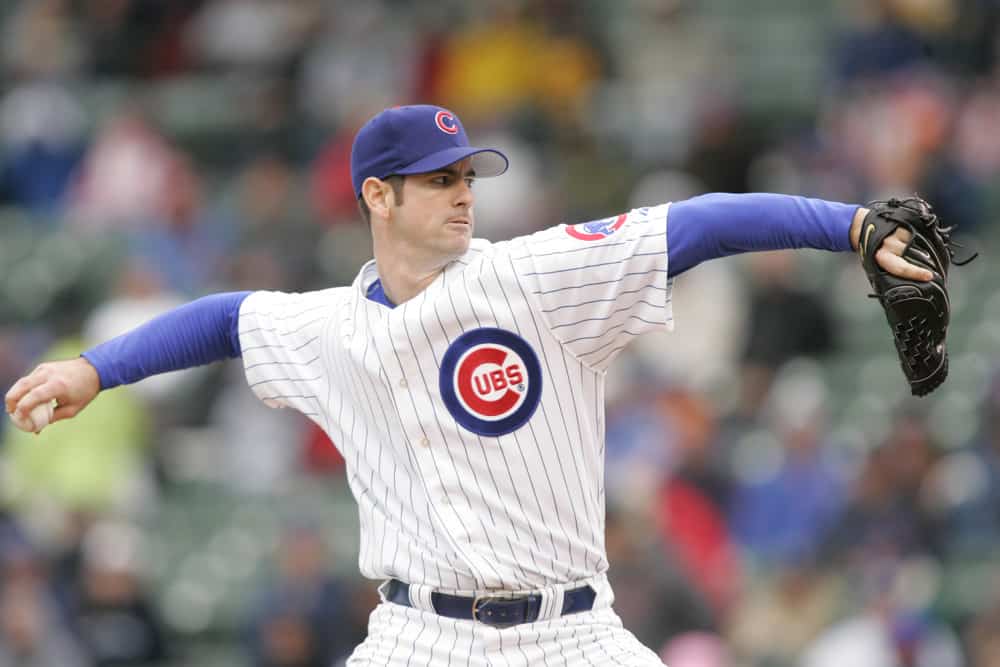 Former Chicago Cubs pitcher Mark Prior once looked like the next dominant arm in the National League.

Alongside fellow youngster Kerry Wood, the two looked as though they’d become the best duo in the league.

However, they would fall well short of this.

Prior would end up struggling to put together much time in the MLB.

He was unable to escape an injury bug that plagued him on the mound.

Here is a look at Prior’s career story and what forced him out of the league.

We will also take a look at where the former Cubs phenom is today.

Prior was drafted by the Cubs in the first round of the 2001 MLB draft.

He was widely considered as the best player in that draft class.

His signing bonus backed that up.

The franchise inked him to a record setting $10.5 million signing bonus.

He wasted little time proving his worth.

After just one season in the minors, Prior was called up to the major league club in 2002.

On Mark Prior's 40th birthday, let's take a look back at his electric MLB debut in which he struck out 10. pic.twitter.com/1wPxavScyr

He also posted a solid 3.32 ERA on his way to a seventh-place finish in the Rookie of the Year voting.

However, he took the league by storm in his sophomore season.

Prior also added 245 strikeouts, leading the league in FIP with 2.47.

This earned him his first All-Star appearance and a third-place finish in the Cy Young voting.

His dominance would continue into the playoffs where the Cubs were vying for their first championship in 94 years.

He threw a complete game in the NLDS, limiting the Atlanta Braves to just one run.

That time Mark Prior threw a Complete Game 2 hitter against the Atlanta Braves in the 2003 NLDS 💪🏼 pic.twitter.com/VrQBagW1In

Then, he posted a 3.14 ERA in two games during the NLCS against the Florida Marlins.

He was the starting pitcher during the infamous Steve Bartman game, where he went seven scoreless innings before the wheels fell off.

Before the 2004 season, Prior suffered from an Achilles injury and elbow soreness that forced him to miss the first two months.

This began the downfall of his talent.

His velocity dipped upon his return, making him easier to hit.

Prior saw a statistical bounce back in the next season, lowering his ERA to 3.67 and starting in 27 games.

However, he still suffered from elbow inflammation and a compression fracture caused by a comeback line drive.

He started the season on the disabled list due to a strained right shoulder.

This wasn’t an injury he returned well from.

In his first four starts, Prior went 0-4 with a 7.71 ERA before getting hurt again.

He eventually finished the season 1-6 with a 7.21 ERA in just nine starts.

It would be the final time he pitched in an MLB game.

He attempted many different comebacks over the years, appearing in minor league games for various clubs.

An injury still always seemed to hold him back.

Prior officially announced his retirement from baseball following a failed 2013 season.

Even though injuries derailed his playing career, Prior remains close to the sport.

After his career ended, he took a front office position with the San Diego Padres.

He then became the organization’s minor league pitching coordinator in 2015.

In 2018, he was hired as the Los Angeles Dodgers’ bullpen coach.

Then, he was promoted as the team’s pitching coach for the 2020 season.

In that role, he helped guide the franchise to a World Series Championship.

While Prior’s story is a sad one of lost potential, he has still been successful.

Rather than let his unfortunate playing story drag him down, he instead gave back to the sport.

Regardless, he will always be remembered as an electric arm that took the league by storm.

The Cubs Have A Strong Middle Infield Duo

What Happened To Mark Prior? (Complete Story)